Kiwi mountaineers to be depicted on big screen

The late Kiwi mountaineers Sir Edmund Hillary and Rob Hall are the subject of two feature films being filmed in New Zealand and abroad.

The film Beyond the Edge is about Hillary and Tenzing Norgay’s first ascent of the world’s highest mountain and is being filmed in Aoraki/Mt Cook National Park and Nepal. It will premiere at the end of the year.

The film Everest is about the death of Kiwi mountain guide Rob Hall and seven other people on a disastrous attempt to summit Mt Everest in 1996.

The two films have caused interest in New Zealand’s mountaineering community and it’s not only NZAC’s Sam Newton who hopes they get it right.

Adventure Consultants CEO Guy Cotter was quoted in the media saying: “Most people close to mountaineering probably don’t have a whole lot of faith that a good climbing movie will ever be made.

“We’ve seen some fairly trashy renditions of what went on in ‘96, so it is actually good to see that there are some real professionals who want to make a real story of it rather than just doing the standard drama that appeals to everyone’s preconceived notions of what mountaineers are like,” Cotter was reported saying.

He said The Eiger Sanction with Clint Eastwood, Cliffhanger with Sylvester Stallone and more recent Vertical Limit have all been rubbish.

“Recent history is littered with some pretty awful climbing films,” Newton said. “Touching the Void, which was a film adaption of Joe Simpson’s book, was pretty good so it can be done.

“I think a lot of climbers look to short films now such as those that appear in the Banff Mountain Film Festival to get accurate and honest portrayals of their sport on screen.

“Improvements and the reduction in cost of technology such as HD and GoPro mean factual films about real people will only become better and more widespread.

“I certainly hope that ‘Hollywood’ gets these two films right, but I am not holding my breath.”

Newton said the most important thing he hopes they get right in the film Beyond the Edge is the contribution of Kiwi George Lowe and the other “unsung heroes of the team”.

“Hillary obviously had a freakish physiology, metabolism and athletic ability combined with an extraordinary mental toughness which made him a great mountaineer,” Newton said. “But it was a team effort, like all expeditions.

“That is hard to shoe-horn into a dramatic film of popular appeal, but I hope they give it a good shot.” 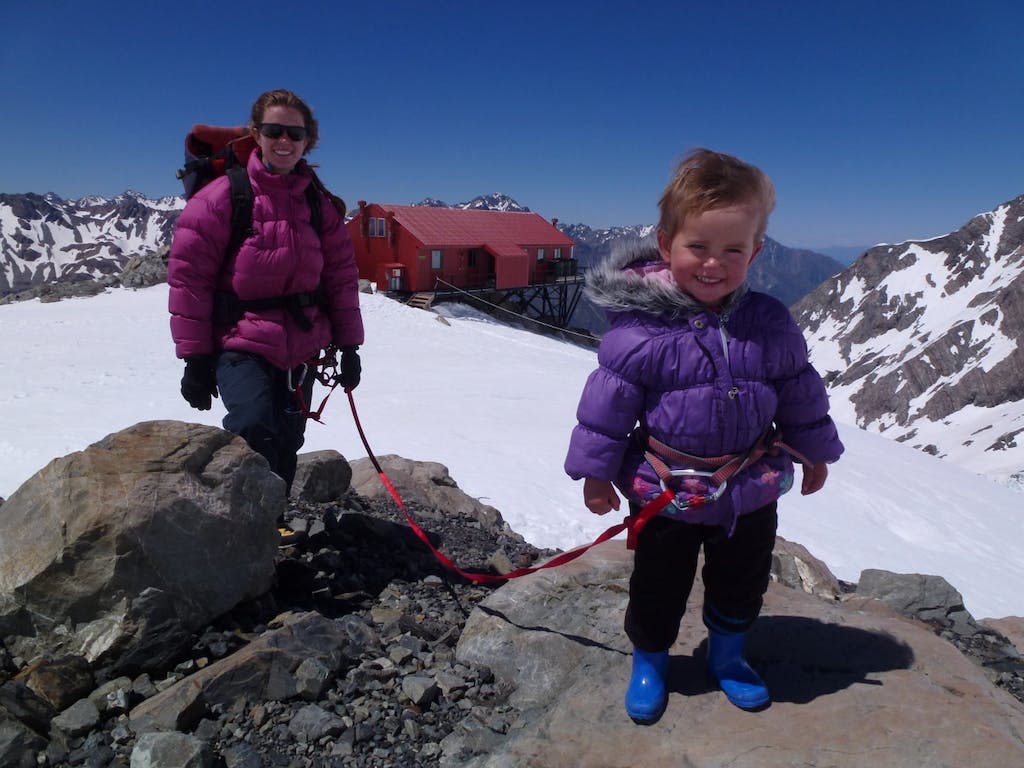 Harnessed and roped up, she led her mother Naomi Gough out to her first summit: a convenient rock-outcrop in view of Aoraki’s immense East Face.

Siula is named after the Andean peak made famous by Joe Simpson in his book Touching the Void. Naomi heard the name while pregnant and climbing in California’s Yosemite Valley and thought: “That’s cute!”

Siula has a strong climbing pedigree. Her grandfather, Peter Gough, was the first to complete an ascent of Aoraki’s 2400m Caroline Face in November 1970 with companion John Glasgow.

After their night at Plateau Hut, mother and daughter were picked up by a tourist helicopter for the return journey to Mt Cook Village. “The tourists appeared gob-smacked at the sight of Siula but once recovered, they wanted lots of photos of Siula, the two year old climber,” said Naomi. 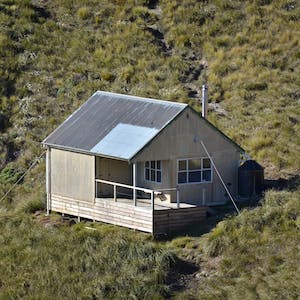 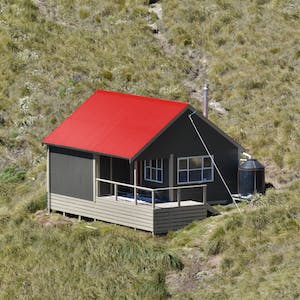 Dulux New Zealand is supplying DOC free paint so it can give a fresh coat to huts around the country in a new three year commercial partnership worth $1.5m.

While the deal is good news for trampers because it will extend the lives of huts, Rob Brown, co-author of a book about New Zealand’s backcountry huts, Shelter from the Storm, said it just scratches the surface and doesn’t compensate for DOC’s recent funding cuts.

Brown said he supports the new partnership and hopes it continues to develop, but added it’s not enough to replace the funding cuts imposed on DOC by the current government.

“It’s great corporations like Dulux want to get involved, that’s to be applauded and I hope there’s more of them, but that in no way compensates for the amount of funding this government has pulled out of DOC in the last few years,” Brown said. “It’s going to take a lot more to ensure our natural heritage can be passed on to the next generation in good a state.

“We need a bigger effort from government and from corporations as well because we’re basically losing the battle for our native wildlife and our huts.

“Even with the best type of corporate deal DOC might get and with volunteer input this will only take care of a third of the huts at the very best.

Under the terms of the partnership, Dulux will provide more than 54,000 litres of paint and wood coating products over three years. This is enough to paint all huts, but DOC is unsure how many it will be able to paint over this time or which ones will be painted after the first 27 are completed by late summer 2014. This will be decided by operations staff as part of DOC’s regular hut maintenance programme.

DOC conservancy staff will paint them and some conservancies may organise community painting days.

Tarn Ridge Hut in the Tararua Forest Park was the first hut to be painted.

Brown said he would like Dulux to supply community groups paint at cost price so more huts could be painted.

“If huts in public conservation areas are being painted by community volunteers then DOC would source all the products necessary to help them complete the job,” he said.  “We’re also looking at increasing the frequency we paint them as that will help extend their lives.”

Williams said the partnership is in its very early stages and has mutual benefits for both partners. 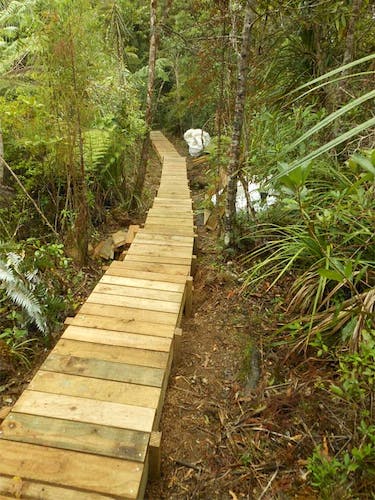 The mud has been banished from Hamilton Track

A monster has been slain and not everyone is pleased about it.

A team of contractors with the weapons of war – chainsaws, diggers and 40 tonnes of construction materials – are upgrading Hamilton Track, affectionately known in Auckland’s trail running community as the Mud Monster.

The infamous monster, lying in wait on the Hillary Trail, has swallowed numerous shoes, coated its victims with mud and brought countless people to their knees.

Some Hillary Trail walkers have been reported to abandon the four to five day tramp due to a run-in with the monster.

Auckland tramper Tony Spratt walked the Hillary Trail in February and is pleased with the upgrade work.

“If you are starting your Hillary Trail adventure from Arataki as a multi-day trek you typically have a large pack weighing around 20kg,” Spratt said. “Negotiating Hamilton Track with that size pack and boggy underfoot conditions is pretty difficult.

“Visitors unfamiliar with the general track condition of the Waitakeres may be put off by this first encounter.

“There is also more than enough challenge on day two and day four to satisfy most multi-day trampers.” 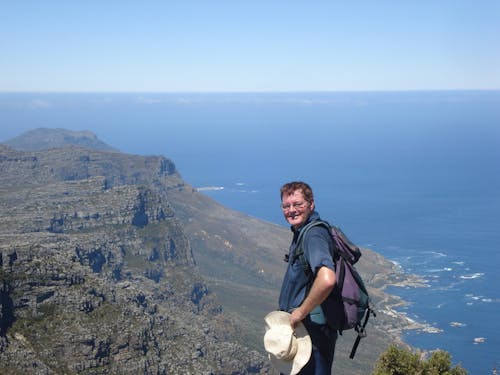 Paul Reid returned to New Zealand after following the Black Caps cricket team’s woeful tour of South Africa to news that brought some cheer to the die-hard cricket fan.

Reid, 40, has subscribed to the magazine since 1992. Among his prizes are a Therm-a-Rest Antares sleeping bag and NeoAir Xlite sleeping mat. He also receives a Silva headlamp, MSR Reactor stove, MSR Nook tent, Gregory Savant pack and Bushnell legend binoculars, plus many more prizes.

The mad keen cricket fan plans to christen his new gear during the English cricket tour of New Zealand. “I’ve got three days between each of the cricket tests against England so I’m going to do some tramping then,” he said. “I’ve enjoyed tramping vicariously through the Tararuas so would like to have a look myself.”