Aside from a tin shed and a few abandoned car bodies, not much marks the former West Coast mining community of Capleston. At its peak in the 1870s, Capleston, the epicentre of several mining operations, boasted some 1000 residents and several pubs.

The West Coast is full of such places, once prosperous towns that sprung up to exploit mineral wealth or stands of timber, only for them to die not-so-slow deaths once the boom times ended. Vigorous re-growth and ample rainfall ensures that many former mining and milling sites are, once abandoned, soon engulfed by bush. Happily for trampers, not everything has gone, and restoration efforts by DOC ensure some relics will survive for a few decades yet.

One of the best historical tramps on the West Coast is the circuit around Kirwins Hut, in Victoria Forest Park. Set on a knoll east of Reefton, Kirwins Hut offers grand views over the Southern Alps and the Victoria and Paparoa Ranges. However, the area’s greatest appeal remains its wealth of gold mining relics, many more than a century old. In 1896, some years after Capleston had gone into decline, prospector William Kirwin discovered quartz high in the hills above, just west of the Victoria Range.

Kirwins Reward Mine operated profitably for a few short years into the start of the 20th century before – like most mines – being abandoned. With friends Bruce Postill and Chris Maclean I’m here for a four-day trip around the mining relics, with a couple of nights at Kirwins Hut en route. 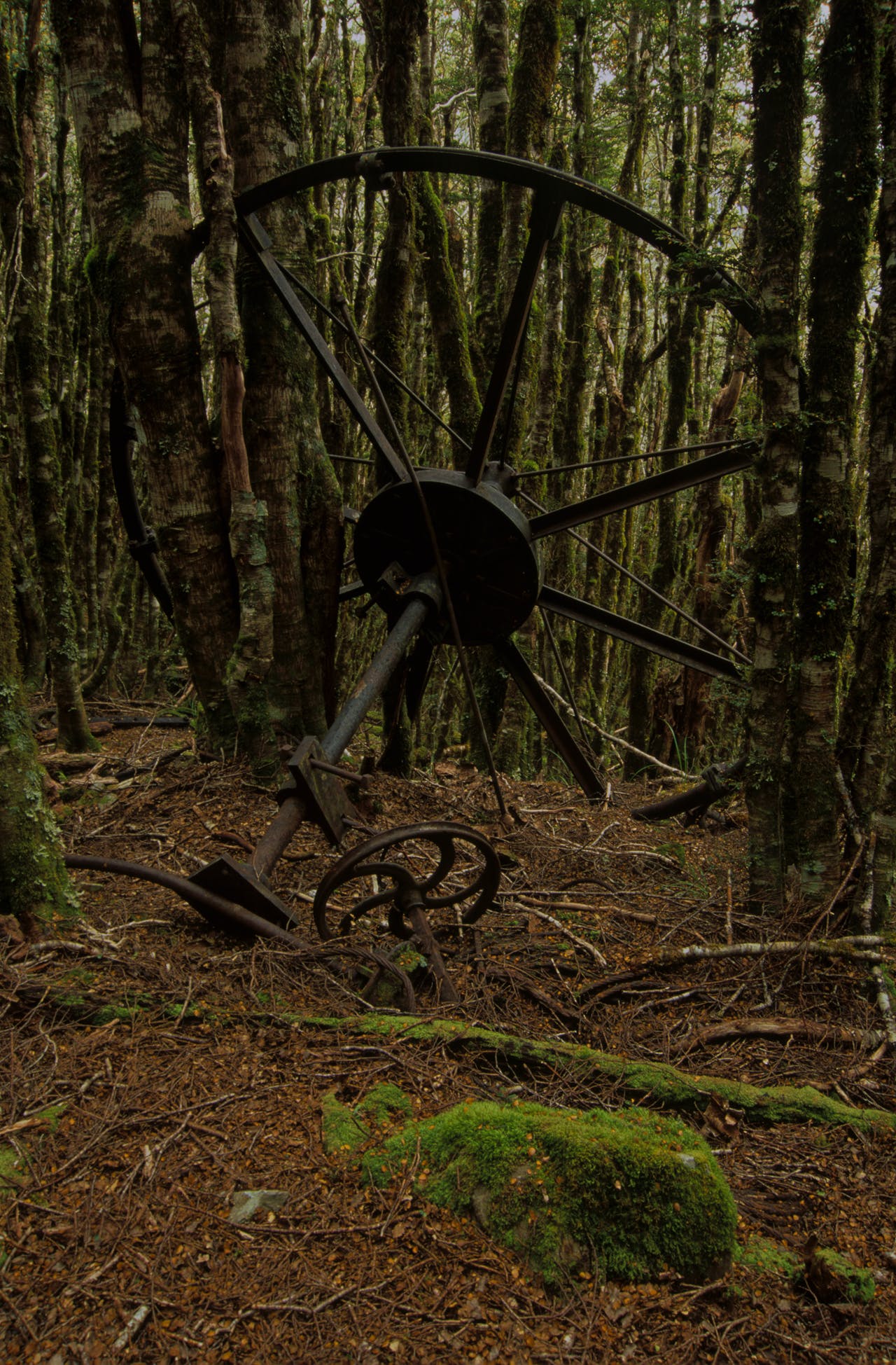 I leave Bruce and Chris at Gannons Bridge on the Waitahu Valley while I shuffle the car to Capleston, where we’ll finish the tramp. Sidestepping cowpats, I wander over a link track that crosses a forested ridge back to the Waitahu Valley.

Having chosen companions one or two decades older than me I reason – foolishly – that I might catch them on the Waitahu Valley vehicle track. Essentially we’re following the old pack track by which miners brought out the spoils of the mine. Now it’s the domain of four-wheel drivers, mountain bikers and the occasional tramper.

I pass an old abandoned state coal mine, shards of the black stuff still littered around, then march on up valley, trotting as fast as possible with a four-day pack. Surely Bruce and Chris can’t be walking this fast?

I’m reminded that mining isn’t all history on the Coast when I hear grinding machines scratching ore from the earth at the Garvey Creek coal mine. Further up, the mine appears – a whole mountainside excavated. It’s impressive in a destructive kind of way.

After three hours I finally catch Bruce and Chris at Montgomerie Hut. Bruce boils the billy, while Chris enjoys a bracing splash in the Waitahu River.

After a night at Montgomerie Hut, we head up the Montgomerie River. Like most built during New Zealand’s gold-rush era, the track is beautifully benched; in places still wide enough to imagine laden pack horses. After a 90-minute walk, the track turns into Kirwins Creek, where we encounter the first mining relic – an old bogey wheel sunk deep in mossy surrounds.

Extracting ore from Kirwins Reward Mine, set high on the mountainside above, involved ingenuous engineering. A 1500m-long aerial cableway transported ore-filled buckets down a steep forested hillside into Kirwins Creek, where a stamper battery crushed the quartz.

We soon reach the majestic-sounding Lord Brassey Stamper Battery. Its 15 stampers once pulverized quartz ore, enabling the gold to be extracted in cyanide tanks. What staggers me most is not the enormous effort of hauling the heavy and bulky equipment in here, but the fact that nature’s energy drove the whole process. The aerial cableway operated by gravity: heavy ore-laden buckets coming downhill providing enough momentum to push the empty buckets back up the mountainside. And a water-driven Pelton wheel generated enough power to operate the stamper battery and other machinery. It seems incongruous that late in the 19th century this technology operated in a remote West Coast valley, while today we still aren’t taking full advantage of renewable power sources.

DOC has erected scaffolding to hold the slowly collapsing battery in its original place. I can well appreciate the need for the scaffolding, but I object to the surrounding bright-orange safety mesh. Why does an historic site, one where people come to appreciate the past, need an ugly, glaringly-modern plastic barrier around it? Chris is bemused by my annoyance.

Beyond the battery, the track zigzags up steep forested slopes towards the actual mine site. In places we pass portions of the aerial cableway, now lying on the ground. Higher up, there’s an assortment of old shovels surrounding two large return wheels lying askew in the forest. A sizeable beech tree, grown during the 100-odd years since mining was abandoned, threads the spokes of one. Wooden towers that once held the wheels and cableway aloft have long since rotted away. 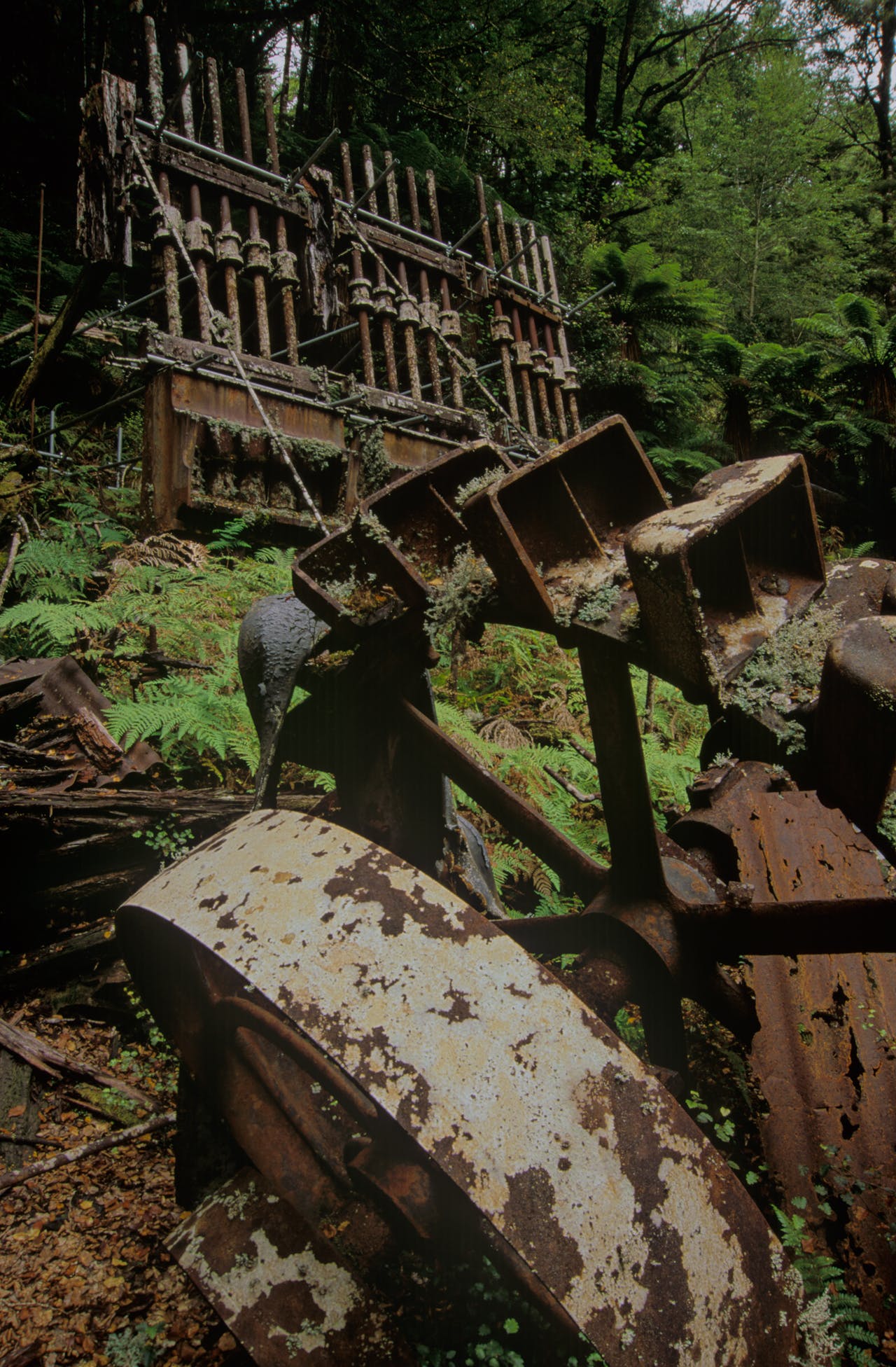 Yet higher we break out of the forest briefly, passing the site of Mrs Flannigan’s boarding house, where the construction crew once found accommodation. There’s a half-collapsed tin hut, parts of an old Shacklock stove, an old iron bed, and bottles in various states of intactness. Beyond lie the shapely granite tops of the Victoria Range. Even with so many relics around it’s difficult to imagine an entire community living here. Enough for Mrs Flannigan to run a hotel.

Kirwins Reward Mine is five minutes’ stroll off the main track, a surreal series of rocky pits partially reclaimed by stunted mountain beech trees. Here raw human effort saw the ore extracted and piled into buckets on the cableway for transport down to the stamper battery. DOC has resurrected part of the cableway, fixing it to trees so it remains aloft. In one place a couple of ore buckets hang amongst regenerating forest. Remarkably, the cable still spans a nearby gully, two buckets suspended halfway across. This is living history, no imagination required.

Despite the expensive machinery and remoteness of the site, Kirwin’s mine proved remarkably profitable for a few short years between 1900-06. It seems as inhospitable and unlikely a place to find a gold mine as imaginable. At 1200m on a mountainside, winter often made conditions miserable for the miners; poor compensation for being above the sand flies of the valley.

After fossicking around the mine site for a while we make our way to Kirwins Hut, situated atop a small hill about 25 minutes beyond. Built in 1988, the comfortable hut features large windows that overlook the Inangahua Valley and beyond. On a good day you can see Aoraki/Mt Cook some 200km away.

We can’t see the great mountain, and instead face mist. It’s cold too. Chris and Bruce stoke the wood stove, piling on – appropriately enough – coal. We spend two nights here, watching the weather alternately brighten and dull, and when the clouds lift we enjoy excursions to nearby Kirwins Hill.

Then it’s down Kirwins Track towards Capleston. Down, down a long, benched track, once used to transport supplies up to the miners.

The forest becomes lusher and denser as we descend; kaka croak and kakariki chatter. Topfer Creek chatters too, sunlight dappling the water and trees. Suddenly, we’re out of the forest, back at Capleston. There’s rich irony here: where once a thousand people lived, nothing is left, while high in the mountains lie relics aplenty.