Access
On SH73, near Arthurs Pass, start from Klondyke Corner (or Bealey Bridge for flood route). Cars can be left at the Bealey Hotel. Trip ends near the Styx River bridge approx. 30km inland from Hokitika (Lake Kaniere Rd.)

From the gold diggings of Canterbury to the greenstone diggings of the Coast, the Three Passes tramp is considered a timeless classic. By Raymond Salisbury

Sheets of relentless rain move across the desolate Wilberforce Valley. During brief breaks in the sodden sky, the sun attempts to shine and birds begin to cheer. But then, it begins again, drowning out all sound except the rowdy riffles of the river. Perhaps I should have taken the guide book’s warning more seriously: ‘It is not recommended that you attempt this trip during a NW weather system.’ Oops.

Hut-bound at Park Morpeth Hut for three nights in the remote reaches of the Rakaia, I read, eat, sleep and wait. The hut is an island of candlelight in a barren wasteland of rock and tussock, a memorial to two trampers who drowned nearby. It was built in 1931 with materials carried in from Klondyke Corner, up the Waimakariri and over two alpine passes.

The eight-berth shelter squats defiantly on a scrubby terrace where the Cronin Stream empties into the Wilberforce River. Full marks to the Canterbury Mountaineering Club – I am happy to put my meagre $5 donation into their red collection box – anything to keep this roof over my head.

I had parked at the iconic Bealey Hotel and set off on the classic Three Passes circuit. Walking up the Waimak was the ‘quintessential Canterbury journey’, according to author Mark Pickering, and I was eager to rise to the challenge.

Despite a bulky pack, I made good progress, passing Anti-Crow hut in two hours and with views of the Crow Glacier and of Mt Harper beckoning me onward. There were marker poles gravel terraces; orange triangles in thickets of matagouri.

Near journey’s end, I gazed in awe at the serrated rock pyramid of Carrington Peak which dominates the headwaters of the Waimakariri – a view enjoyed from the balcony of Carrington Hut (another memorial to a drowned tramper, and also built by the CMC.) It has four bunkrooms, two kitchens and one mountain radio. On this night, a Kiwi family blended with French and Czech backpackers.

Daybreak saw me fording the fast-flowing White River, then bashing through bush to the confluence with Taipo-iti River: my exit up to Harman Pass. A dry creek-bed led to the main stream, still running high. Here, the hard yakka began as I clambered up the gorge on unstable rock and scree, forced by bluffs to criss-cross the tumbling, thigh-deep torrent.

Finally, after two hours, I emerged onto an easy tussock trail, soon topping out on Harman Pass (1321m). I was straddling the Main Divide, peering down Mary Creek into Westland. A portent of poor weather had me scuttling past an idyllic campsite at Ariels Tarns and heading south-west toward Whitehorn Pass (1753m).

Predicted gale force winds and gaping crevasses had my nerves on edge. Atop Whitehorn Pass, clouds were building over Mts Isobel and Marion, while the hanging Cronin Glacier, frozen in time, melted into the abyss below.

I boiled a billy, sipped warm tea and enjoyed a moment of mountain solitude before plunging downward to the valley floor, filled with rotten snow. Traversing to the true left, I picked up a faint ground trail with comforting cairns which led to the Wilberforce River, Park Morpeth Hut and blessed relief.

Park Morpeth Hut has a mountain radio – a good thing, as I can follow the forecast each night and plan my escape. There’s possibly two days before more heavy rain will make all waterways impassable. On my third evening, I boiled the billy for some brave souls who arrived from Harman Hut in marginal conditions, soaked to the skin.

And so it is, on my birthday, that I find myself beating a path up to Browning Pass. I photograph the Clough Memorial cairn, a stark reminder to take all river crossings seriously. Before me towers Browning Pass, where the orange contour lines kiss on my topomap. It’s an unlikely place for a road, but remnants of the old bridle path are still vaguely visible. I haul my pack up the original zigzagged track, overgrown but easier than tackling the scree slope directly.

How the gold miners braved winters in these wild parts is legendary. A writer has referred to their ‘heroically blind optimism’, as they drove a 300m tunnel into the side of Mount Harman. Their search for gold ended in spectacular failure.

Not having a great head for heights, I need all the blind optimism I can muster when the trail peters out. The scree chute offers no handholds but I manage to manoeuvre up the left-hand edge, slowly gaining height, until climbing through bluffs to emerge on top of Browning Pass at 1411m – breathless, but ecstatic! The Divide has been crossed. 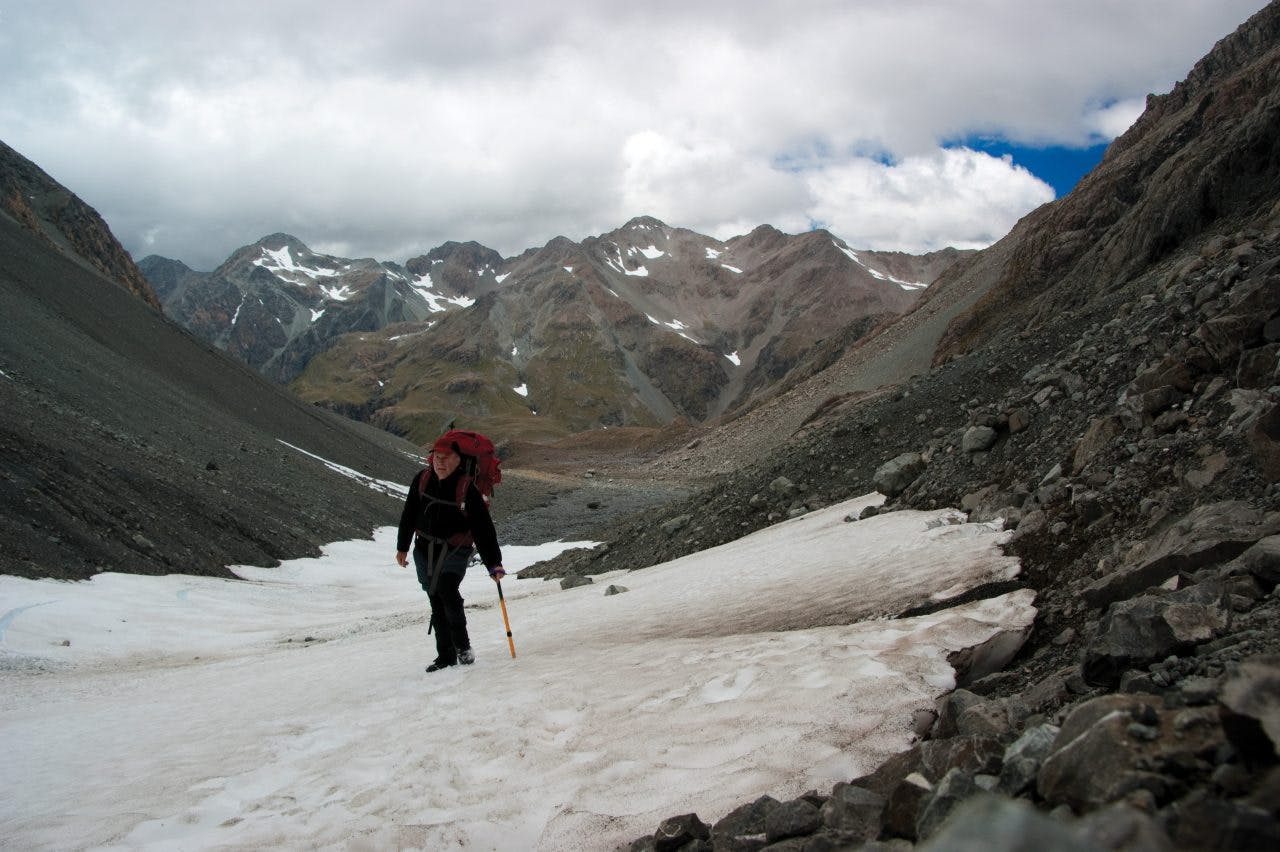 An overcast sky dulls the hills surrounding Lake Browning, melancholic in muted browns and dull greens. I follow the old miners pack track around the lake and into the beginnings of the Arahura Valley before dropping down to cross the Arahura onto an easier marked track to Harman Hut. The scenery is stupendous, the absence of beech forest unusual. Halls totara and mountain neinei are prominent in this watershed, along with the rough-leaved tree daisy.

I stop for a cuppa, but that’s all before pushing on in light rain over an iconic NZFS swingbridge over the spectacular canyon of cascading white-water that is the Harman River. Here, the pack track is in good shape, so I make fast progress to Styx Saddle.

The Styx is wide and sluggish where I wade to the far bank and stumble into Grassy Flat Hut. Now in its third generation and pleasantly located on expansive flats beneath a stand of kahikatea, this version of the hut was built by DOC in 2005.

On the final day, I farewell my mountain haven and eagerly plunge into the first ford. The pack track skirts the true right bank of the Styx River for its journey out of the hills. At times the going is easy, albeit greasy, and toetoe flats make for efficient travel. However, my troubles are not quite over. Half a dozen times the track is washed out, disappearing under precipitous landslides. I find myself boulder-hopping along the swollen Styx, where a simple slip could be unforgiving. Numerous side-creeks, some swift and dangerous, must be crossed.

And then, within two hours of the road, a recent slip blocks the way ahead. Necessity is the mother of invention – I remove the ice axe from my pack and begin to cut steps into the sodden shingle. Methodically and carefully, I hack small footholds into the slope, working my way up and eventually haul myself onto the track.

The sky clears and by early afternoon I am boiling a billy at the road end, my feet still swimming in sodden boots, my thumb out, expectant. Before the sandflies noticed me, I have hitched a ride to Hokitika.

The Three Passes route can be described as a classic alpine crossing, full of challenges and demanding utmost respect. In fine, clear weather some parties camp at Ariels Tarns and Lake Browning, enjoying the airy feel of tenting on the tops. And when the rivers aren’t raging and the sun is shining, in the company of good friends, crossing the Three Passes can be an unforgettable experience.

If you’ve got the time, experience in river crossing, aptitude with an ice axe and a head for heights, it comes highly recommended.