Backcountry travel in winter is a serious proposition, but it can also be enticing and and the mountains look spectacular. By Paul Hersey

The forecast was solid. The temperature had dipped well below freezing. Kynan and I were in search of ice, fat runnels of the stuff that flowed tantalisingly down steep narrow gullies. Winter is the time to go forth, with crampons sharpened and ice axes held to attention.

We picked a valley of promise, wading waist deep through snow drifts that had somehow predicted which way we wanted to travel. Doing this for hours on end should be promoted as the next big Jenny Craig weight loss phenomena. By the time we found a place to bivvy I was (a) completely poked, (b) frozen at my extremities yet overheating at my core, and (c) over it.

I threw my pack down, kicked half-heartedly at a patch of snow before unfurling my sleeping mat, bivvy bag and sleeping bag. Later on came the hours of snow melting to rehydrate, and then a poor attempt at sleeping. My water bottle froze inside my sleeping bag, as did I. Spindrift blew into the small opening in my bivvy bag, thawing, dripping and then refreezing. I lay in the dark and imagined warm tropical beaches with palm trees, bikinis and pina coladas. Are we having fun yet?

Whether tramping, climbing, skiing or snowboarding, heading backcountry in winter is a serious proposition. It’s not so much a matter of trying to get above the snowline, but more about dealing with the snow coming down to meet you.

Serious yes, but this doesn’t mean you shouldn’t go. Despite the fact that the phrase ‘it doesn’t have to be fun to be fun’ was likely coined in the frigid depths of winter, I treasure making the most of the wee daylight hours. And through experience, luck, advice from others and some well-timed courses, I’ve slowly accumulated a self-safety checklist to use each time I conveniently forget about the ‘pleasant’ tingle that accompanies thawing fingers and toes. This is not an exhaustive list, but more a process that lets me assess the likely risk and how I can mitigate it where possible.

First off, the pep talk: Mountains in winter are absolutely stunning! Plastered in snow and ice, they somehow appear grander, more majestic. All that cruddy, crumbly greywacke that adorns our Southern Alps is nicely hidden or frozen together. River levels are lower (although considerably colder). Sand-flies have gone on holiday to somewhere near the equator. And huts – apart from those on the popular ski-touring routes – are empty.

So, to the checklist.

Wait for a good forecast: Tramping or climbing in winter is not the same as doing it in summer, only colder. While getting caught out in poor weather in summer can be, at worst, unpleasant, the same experience in winter is life-threatening. Cold kills, a fact reflected in a number of recent backcountry tragedies. Pushing on through poor weather – something often done in summer – greatly increases the risk. At the very least have knowledge of nearby huts to shelter in or, if none are in the area, carry a tent.

This is not meant as a scare tactic or an over-dramatisation. While in summer I often cut corners in terms of how much kit I carry, in winter I’ve learnt to carry enough warm stuff to cope with the coming of the Second Ice Age. This is an extra safety buffer, especially in case someone twists an ankle and has to stay put in the open for a cold night or two. Check Metservice and Metview for short and long-term forecasts before you leave home. And while June can be predominantly changeable and stormy, July or August often provide prolonged windows of settled weather. 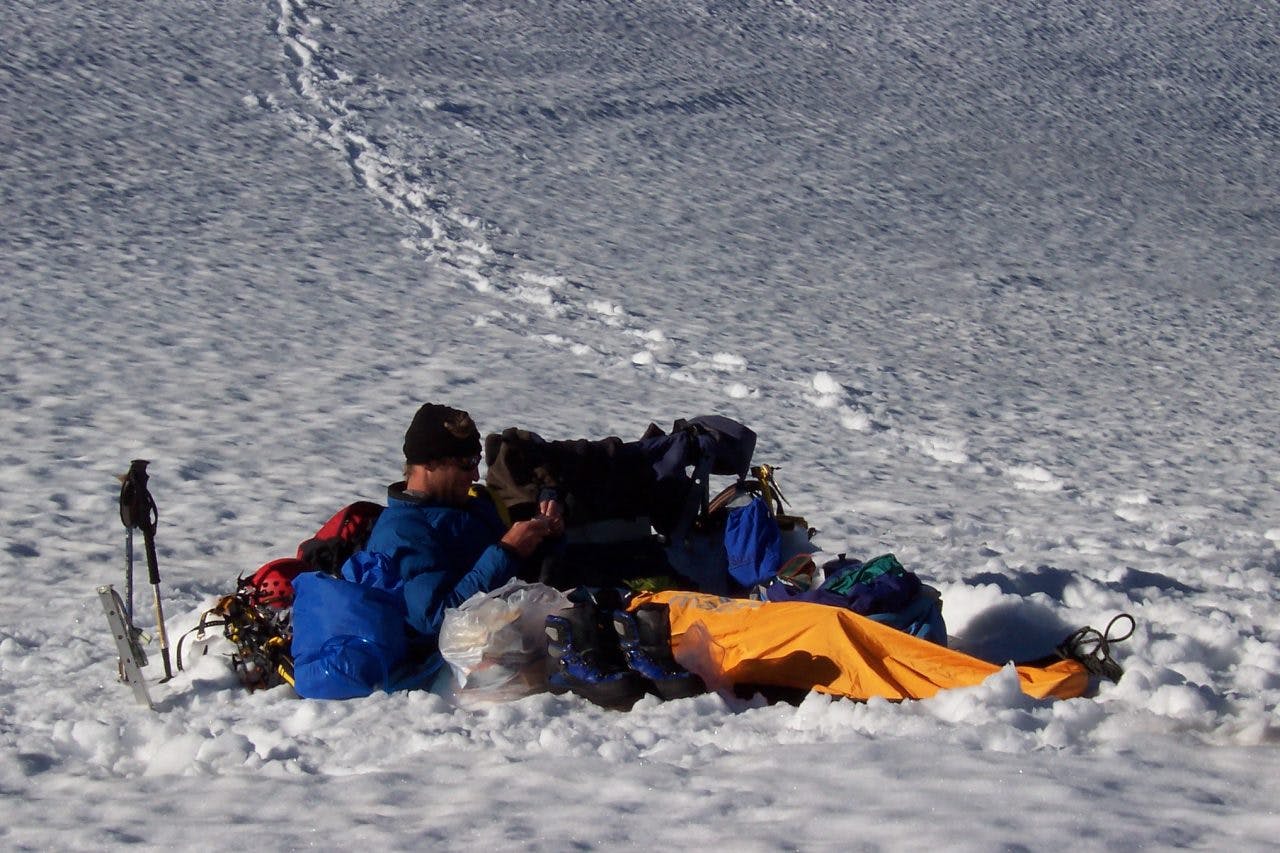 Plan your trip: This is linked to the point above in terms of huts but also, and more importantly, relates to snow conditions. Avalanches are scary beasts! Some of this country’s top avalanche experts have been killed by avalanches, and some even while giving instruction on avalanches. So far I’ve been fortunate (touch wood), but I’ve certainly had my share of near misses. And while avalanches can occur at any time of the year, winter and spring are recognised as the most risky seasons.

I don’t have room in this article to explain the dos and don’ts, other than to say ‘do’ an avalanche awareness course (through the Mountain Safety Council or another suitable organisation) and ‘don’t’ cross a snow slope that you think is risky. Pick an alternative route, even if it is more difficult or prolonged. Be prepared to turn around. Transceivers, probes and shovels certainly help, but only for the 50 per cent of accident victims that survive the initial force of an avalanche. Yet the more you practise with these tools, the more efficient you will be if/when you have to use them. Avalanche.net.nz provides an updated assessment of conditions in different areas.

Gear up: Ice axes? Crampons? Snowshoes? Down jackets? Tent? Mittens? Snow goggles? Boots? The list is endless. And, as everyone knows, if you take everything you won’t leave the car park. As mentioned above, I don’t cut too many corners in my winter kit. If sleeping on snow, I carry a tent. A single skin will usually suffice, and helps to minimise weight. An inflatable sleeping mat is much warmer than closed-cell foam. Blow it up firm, so you are as insulated from the snow as possible. Take as much down as you need. I will sometimes use a Primaloft bag instead of down because it’s not completely hopeless if it gets wet.

I definitely use a Primaloft jacket instead of down because it is likely to get wet!

If you are considering taking crampons and ice axes then take both, not one or the other. Consider using a walking-pole with a snow basket. This means you can stand up tall while walking and your weight stays directly over your crampons. Also, your ice axe can be much shorter. The New Zealand Alpine Club, along with various other tramping clubs, offer basic snow-craft courses that teach proper crampon and ice axe technique. Steer clear of instep crampons – they are designed for flat ground and have high-risk potential, especially descending.

Leave your hydration bladder at home – the tube will freeze. Be prepared for water sources being frozen, so carry extra gas to melt snow or ice.

I often wear running shoes during the low valley approach, especially if there are river crossings. This keeps my boots dry for higher up.

Finally, carry a good head torch and spare batteries. Some of my climbing mates believe the best winter bivvy kit is a head torch – if you keep moving, they argue, your body generates enough heat to stave off the cold. 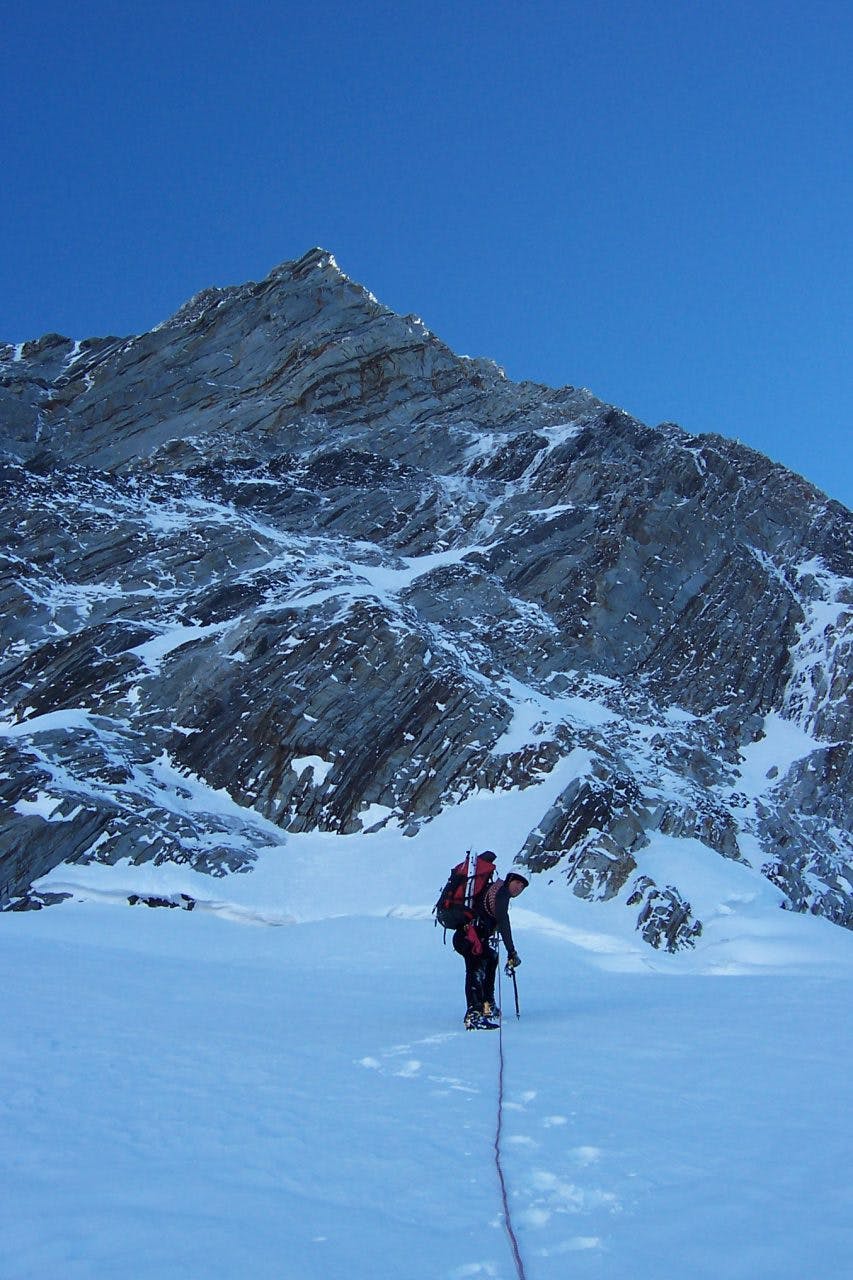 Hours of plugging through deep snow is tiring. Be prepared to make the big calls to turn around if need be. Photo: Paul Hersey

Pay attention: As someone who has suffered from frostbite, I am now rather attentive to my fingers and toes. The frostbite itself isn’t that painful, but the following months spent dealing with layers of dead flesh are rather debilitating. Now I sleep with any wet clothes that need drying as well as my boots to ensure they don’t freeze overnight. I often use Windstopper gloves to help combat wind-chill, as well as a beefier pair when playing in snow.

Along with paying attention to your own needs, keep an eye on your tramping or climbing partners. Hypothermia can sneak up on everyone. Familiarise yourself with the symptoms and take appropriate courses of action before the situation becomes too serious. Be prepared to suffer from the cold, but recognise the difference between suffering and deteriorating.

Make the big calls: Don’t commit yourself to crossing a pass or following a route at all costs. Unfavourable snow conditions can change a trip from being enjoyable to a nightmare. I once made an unpopular decision to turn around when the hut we were aiming for was in sight and only a few hundred metres above us. Dusk was not far away and the relative warmth of the hut beckoned. But we were already wading through thigh deep snow and it would likely get worse as we gained altitude. Despite the hours of dark travel required to return to the hut we had just come from, I knew we could reach it.

Be prepared for slower travel, bigger packs and scarily short daylight hours. Spooning is an acceptable way of keeping warm – for all but the most macho of outdoor types – and don’t forget to take lots of photos to impress your friends.