Access
Jet boat from Pipiriki or from SH43 at Strathmore, east of Stratford, where the signpost indicates the road to Upper Mangaehu Road

We made our way up the Whanganui River the easy way with a 40-minute jet boat ride from Pipiriki, disembarking at the start of the Matemateaonga Track. This led away to the west at a disturbingly sharp upward angle.

The track follows an old Maori trail and was first cut by farmers in the 1890s seeking to improve access to their farms at Aotuhia, 40km away. Everything they needed or produced for sale was carried along the trail on the backs of horses, mules and men.

Later, a road for carts was started but never finished. The track fell into disuse from the 1930s when an alternative road from Aotuhia to the railway at Whangamomona was built. It was a good idea but came too late; the remoteness and the economic depression had killed off the whole settlement and the farmland reverted to bush. 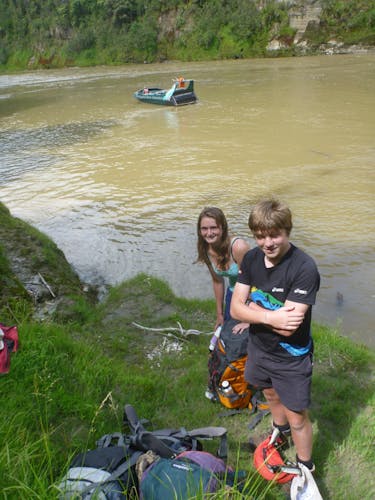 Matemateaonga is a comfortable four-day walk. Most people walk the track from west to east, starting at Kohi Saddle. This approach is largely flat with a downhill to the Whanganui River. Perversely we were walking the other way and our first job was to get to Puketotara Hut. It was the most difficult section of the tramp, a 90-minute climb from the river but offering views of Mts Tongariro and Ruapehu. The bush is thick and it wasn’t until we were just 20m from the hut that it first came into view. As with all four huts on the track it was well appointed with a warming fire, plenty of water and space to sleep eight to 12 people.

The track is well marked and easy to follow. At times it is as wide as a Great Walk while at others, sections are narrow, winding through fern and trees. You can measure your progress with reference to kilometre posts erected alongside the track.

The forest is magnificent and the lush vegetation is the highlight of this tramp. Huge rimu and rata with all the diversity of a lowland rainforest. We saw and heard few birds, though an active huhu beetle population flying about the forest floor in the evenings made up for this.

The walk from Puketotara Hut to Pouri Hut took 7hr and on the way we lunched at Ngapurua Shelter. Much of the day was spent walking through a green tunnel with dappled sunlight highlighting the ferns.

On our way to Omaru Hut, we climbed Mt Humphries along a steep track, but it only takes 30-minutes and is well worth the effort. The forest was steaming and, with mist hanging, we failed to see the volcanoes of the central North Island, but we did spot sea shells in the limestone bluffs and debated how they got there.

Back on the track, we clambered over and under fallen trees and came across a group of Germans wisely travelling eastwards. It took us six hours to reach Omaru Hut where we spent our last night before the relatively easy 90-minute amble to the road at Kohi Saddle.

With the arrival of our transport, we took the opportunity to drive further down the road to Aotuhia, world famous in Taranaki for the ‘Bridge to Somewhere’. The bridge was built in 1936 as a key link in a road to Whangamomona and is similar in design to the more famous ‘Bridge to Nowhere’. It fell into disuse as soon as it was built but today it’s open for business; a farm track actually crosses it.

The Matemateaonga Track is a lesser travelled track. One can only marvel at the tough fellows who initially formed the track through the wilderness and the families who relied upon it.