If you’re in the mood for a remote tramp-and- camp, an excursion through two splendid Te Urewera valleys to Te U bivvy will get you well away from it all. Driving to the start of the track deep in the heart of the Waimana Valley is an adventure in itself – a narrow winding gravel road with steep bluffs, the occasional wash-out, maybe a local horse or two and the enclosing bush-clad hills giving a taster of the upcoming tramp.

The trip begins with a short but sharp climb on the Te Pona a Pita Track and down to Waiiti Stream. A keen-eyed member of our party spotted a sleepy ruru perched on a branch just off the track. We tiptoed past but very likely it knew it was being watched and photographed.

Once the stream was reached, it was wet feet and occasionally wet knees for much of the day as we followed it up to the junction known as the Three Forks – the confluence of the Waiiti, the Kaharoa and the Whakapirau streams. This is also the site of the strategically placed former Kaharoa Pa. 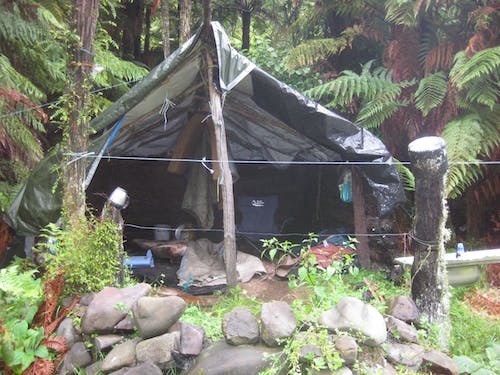 Our route was now up the Kaharoa, with a short stop at a hunters’ camp not far from the confluence. It was fairly straightforward to follow stream or track through predominantly tawa, rimu and beech forest to the bivvy, a tidy little four-bunker. Te U Bivouac is located on a pleasant grassy terrace on the Kaharoa’s true left and has plenty of camping space if the hut is busy. Some friendly hunters and their equally friendly canine companions were in residence, so our party was in tents.

Next day we were scrambling throughvslightly rougher terrain up to the headwaters of Kaharoa Stream, careful not to take any side streams in error. We found much of the route obliterated by tree fall, although there were still some old white Permolat markers in place. Eventually a few orange triangles were spotted which led the way to Pt553m.

The route was marked all the way to the headwaters of the Waiotahi River and from there we ambled down to an attractive camping area at the confluence of the Waiotahi and the Paititutu Stream. Bob’s Bivvy, a makeshift hunters’ camp, offers good shelter for those who forget their tents. We enjoyed a fire that night and all the good things that go with camping out with like-minded companions in the middle of nowhere. It was an easy wet walk of about five hours down the Waiotahi to Waiotahi Valley Road where our transport was waiting, with a welcome Thermos of tea and coffee and a selection of home-baked goodies.

Curiosity about the biv’s history prompted some research. It is likely the current hut is the Mark III version, built in 2009. Collective memories of local trampers, ex-Forest Service and DOC staff indicate that the original structure dating around 1964-65 was probably black malthoid covering tawa-sapling framing. The biv was built to provide shelter for goat cullers. The Mark II version probably arrived around late 1967-early 1968 when most NZ Forest Service huts were built in Te Urewera.

Why Te U? As the NZ Forest Service often worked with Ngai Tuhoe in building these bivvies, perhaps the name was given by a local for reasons now not known. The best guess so far is that Te U is an abbreviation for Te Urewera – but options are still open. One thing our group did agree on – Te U Bivouac is a good place to visit and getting there is a challenging and satisfying tramp.