Canterbury’s recent spate of earthquakes, shocking and tragic as they have been, should not deter recreationalists from taking the time to explore the regions magnificent natural heritage now reserved in a great series of high country parks. These parks, located at least 100km from Christchurch city, have sustained little, if any damage, and will also make a fine retreat from the ravaged city.

With the addition of the Te Kahui Kaupeka Conservation Park, centred on the Two Thumb Range, Canterbury now boasts extraordinary scope for recreation in diversity of landform and environment. Much of this estate is barely two hours drive from Christchurch or Timaru, though it’ll take longer to reach Ahuriri and Ruataniwha parks in the south-west.

Here’s a selection of the top five parks and some options on what to do there.

Ruataniwha straddles much of the watershed that feeds into Lake Ohau in the MacKenzie Basin At its centre are the Dobson and Hopkins, two large rivers that rise on the Main Divide and flow for over 50km to reach the lake.

Several tributaries off the main valleys offer trips, notably the Huxley, Temple, and Maitland valleys, which together with the Hopkins and Dobson offer a variety of tramps, routes, and climbs. This is big country and most trips will require careful planning and knowledge of weather, snow and river conditions.

There are many well maintained huts in the park, allowing for hut-to-hut trips, range traverses, mountain bike trips or just easy overnight alternatives to multi-day trips. Extended trans-alpine crossings can also be made outside of the park to the Landsborough Valley or into the adjacent Ahuriri Conservation Park.

Of particular interest is the inclusion in the park of the eastern slopes of the Ben Ohau Range. This range borders Lake Pukaki and can be accessed from several points along the Mount Cook Road and from near Twizel. It offers climbs on peaks up to 2500m in the north as well as mountain biking trails and easy day walks around the southern section. Ohau Ski Field is also in the park. 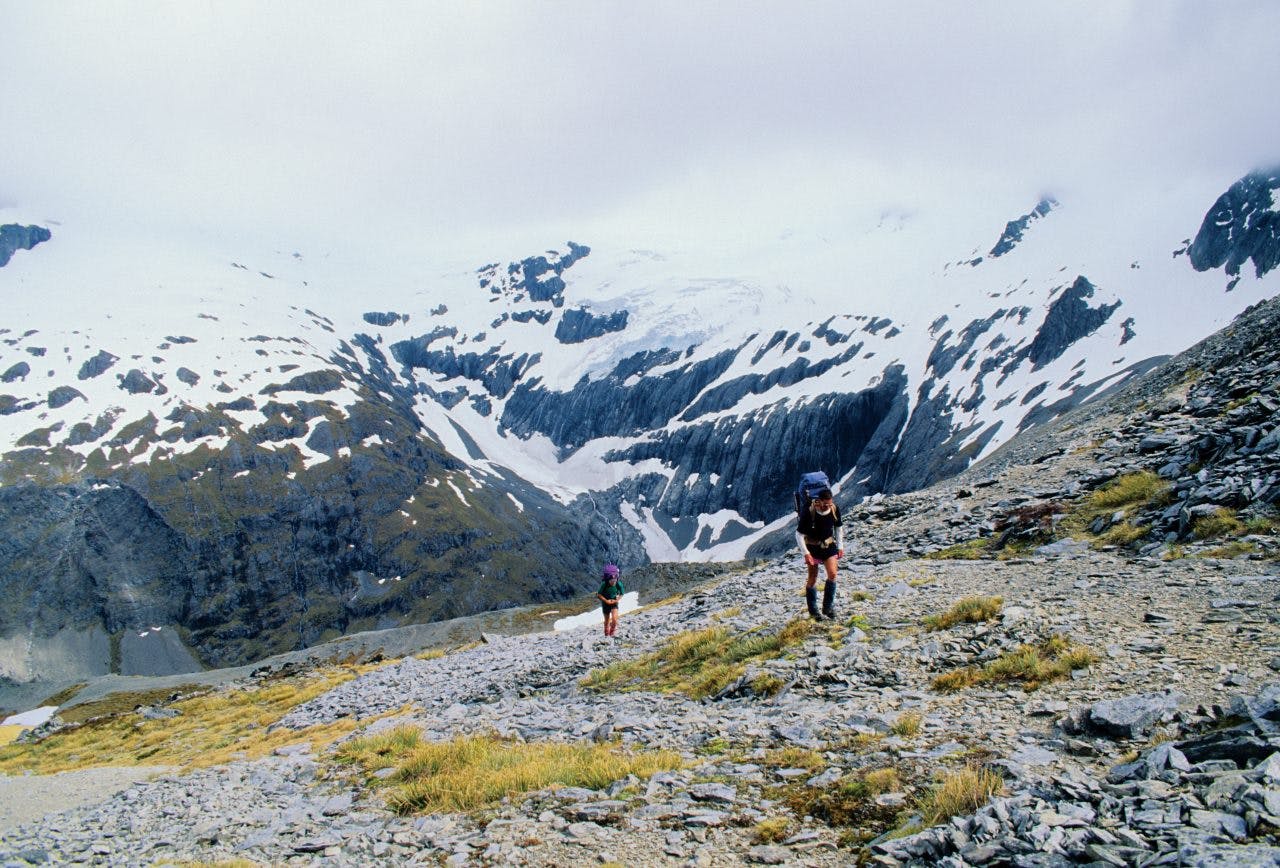 On the way to the Bivvy Rock beneath Mt Barth

At 49000ha, Ahuriri is huge, larger than Ruataniwha to its east and north, yet with much more accessible landscape and headwaters.

The Ahuriri River, though large, has excellent access almost all the way to its head basins with several huts en-route and attractive side valleys that could be explored or traversed to reach the Ruataniwha Conservation Park; notably Watson Stream and Snowy Gorge Creek. The headwaters saddle with both the South Huxley and South Temple valleys making possible more challenging routes out of the valley. The valley itself is beautiful and the showpiece of the MacKenzie Basin headwaters with good road access from the south off SH8 (Lindis Pass Highway).

Fishing is excellent throughout the valley and the mid-river has some moderately challenging white water kayaking sections. Notable alpine ascents are possible on Mt Barth and Ht Huxley, both over 2400m.

The valley huts are small, but there are superb campsites for base camp or family-oriented activities.

The upper Ahuriri, above Top Hut, has alpine routes to the South Huxley and South Temple valleys with the latter having a further alpine route from South Temple Hut back over to Watson Stream, a tributary of the Ahuriri. 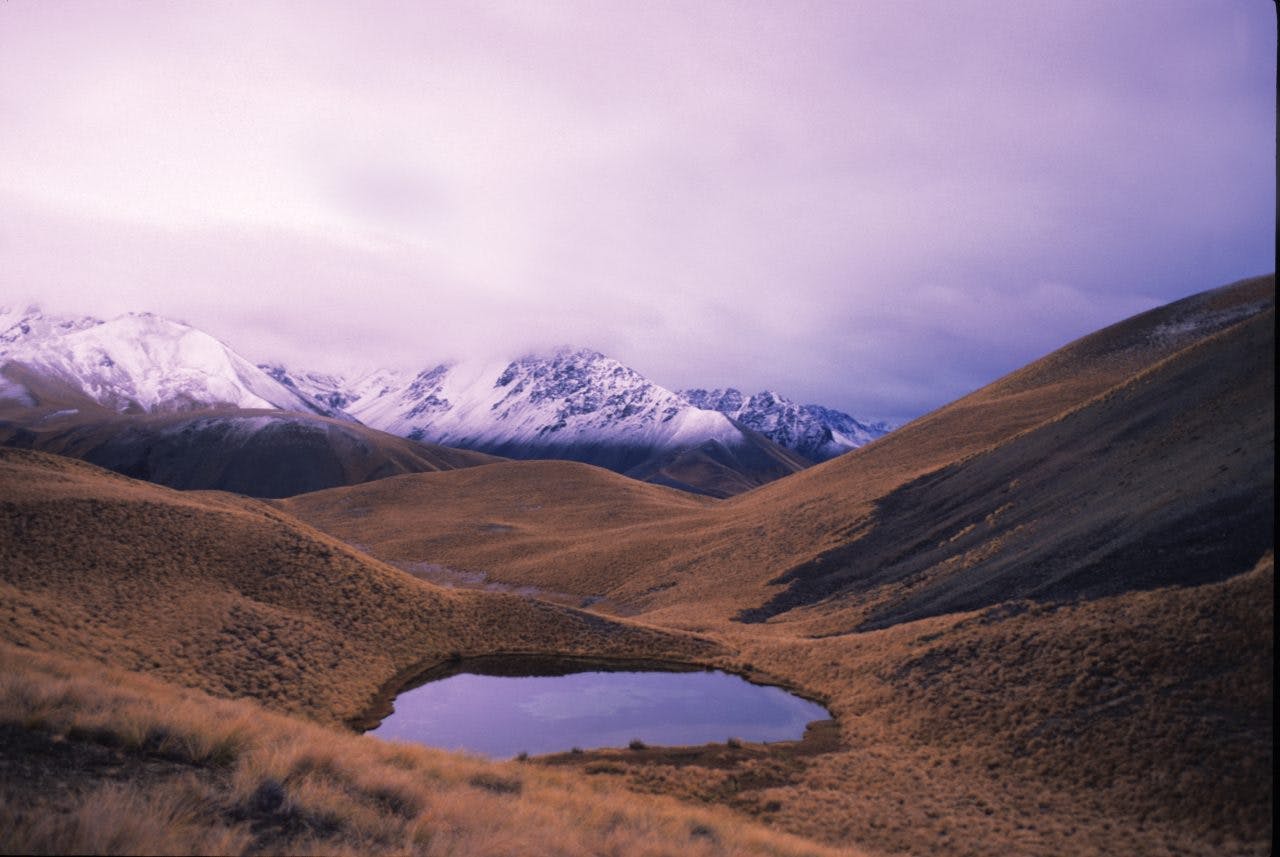 Parts of the Te Araroa Trail passes through Bush Stream

The newest in this group of parks, Te Kahui Kaupeka covers a large chunk of mountainous country between the Godley-Macaulay and Rangitata valleys centred on the Two Thumb and Sibbald ranges. The park’s southern section is much easier to traverse than those parts nearer the Main Divide. The Te Araroa Trail also makes an incursion through the Bush and Camp stream catchments, two large, scenic valleys dominated by extensive tussock landscapes and backed by the rocky spine of the Two Thumbs.

Huts are mostly in the Havelock feeder of the Rangitata and its tributaries, with others sited along the Te Araora Trail and in the Macaulay.

Access is seldom easy, with the notable exception of the Te Araroa Trail, though even here rivers guard all entries. This hazard grows as you go further into the park. Very large rivers flow from the Alps, making routes into the interior challenging propositions. Some 4WD access exists, in good conditions, up the Havelock and Godley-Macaulay valleys. 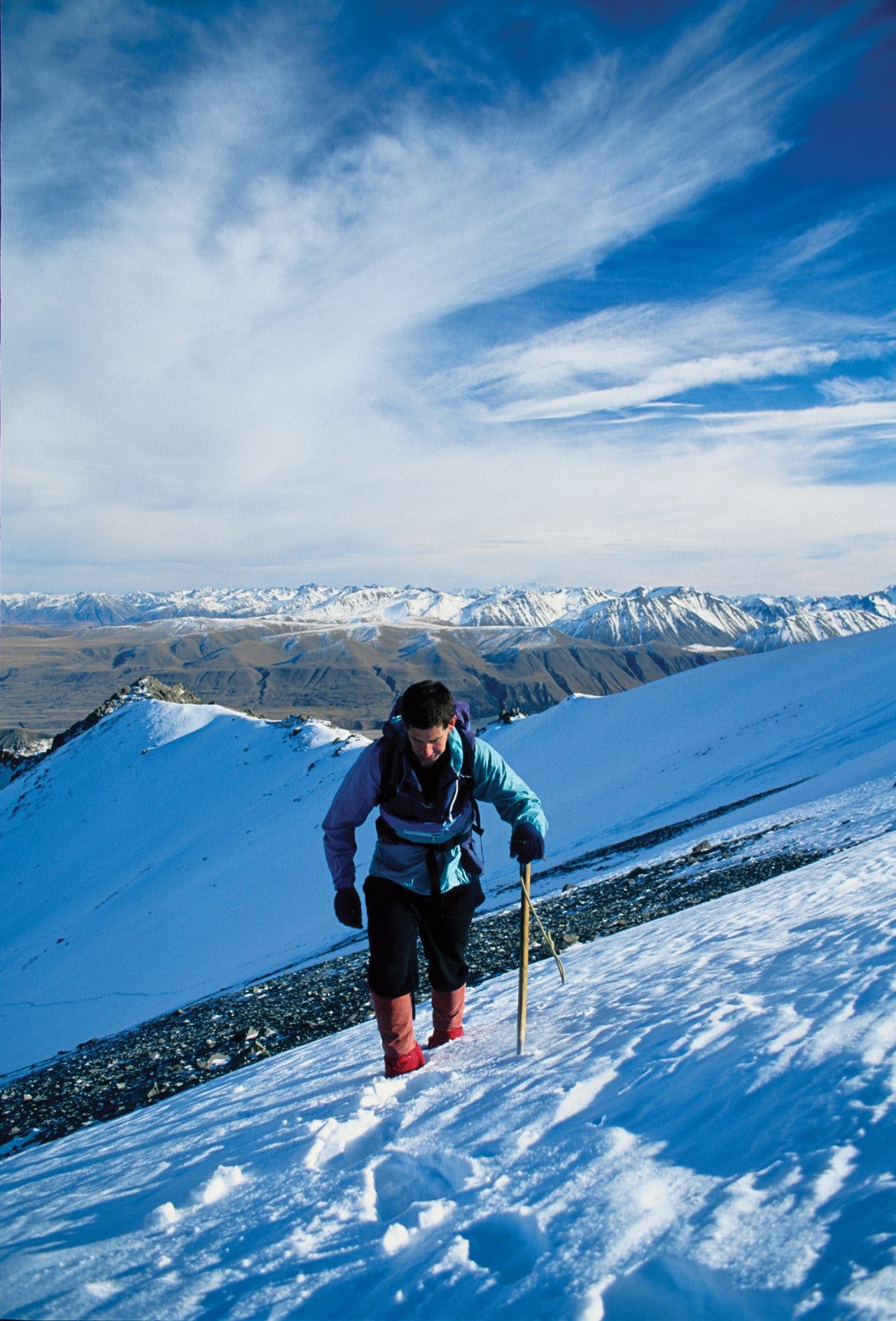 This park is a series of unconnected conservation areas and it’s possible that additional areas will be added to link up some of the sections. For now, the park is contained between the Rakaia River to the north and east and the Rangitata River to the west. Within this rough boundary lie a large number of lakes, wetlands, high country valleys, and river headwaters which form the 50,000ha park.

Hakatere contains some of the most diverse environments of all the parks, from the slopes of Mt Hutt Ski Field, to the mixed podocarp forests of Mt Somers, to the high country wetlands around Lake Heron and Mt Harper, through the remote tussock-filled valleys of the Cameron and South Ashburton, to the rugged headwater catchments of the Lyell, Clyde, and Lawrence valleys. Hakatere has something to offer all-comers and there is excellent road access around most of the park.

The huts and tracks attract day trip and overnight excursions, mountain biking opportunities galore, and there are unmarked routes onto the innumerable high foothill summits in the Rakaia and Ashburton catchments. 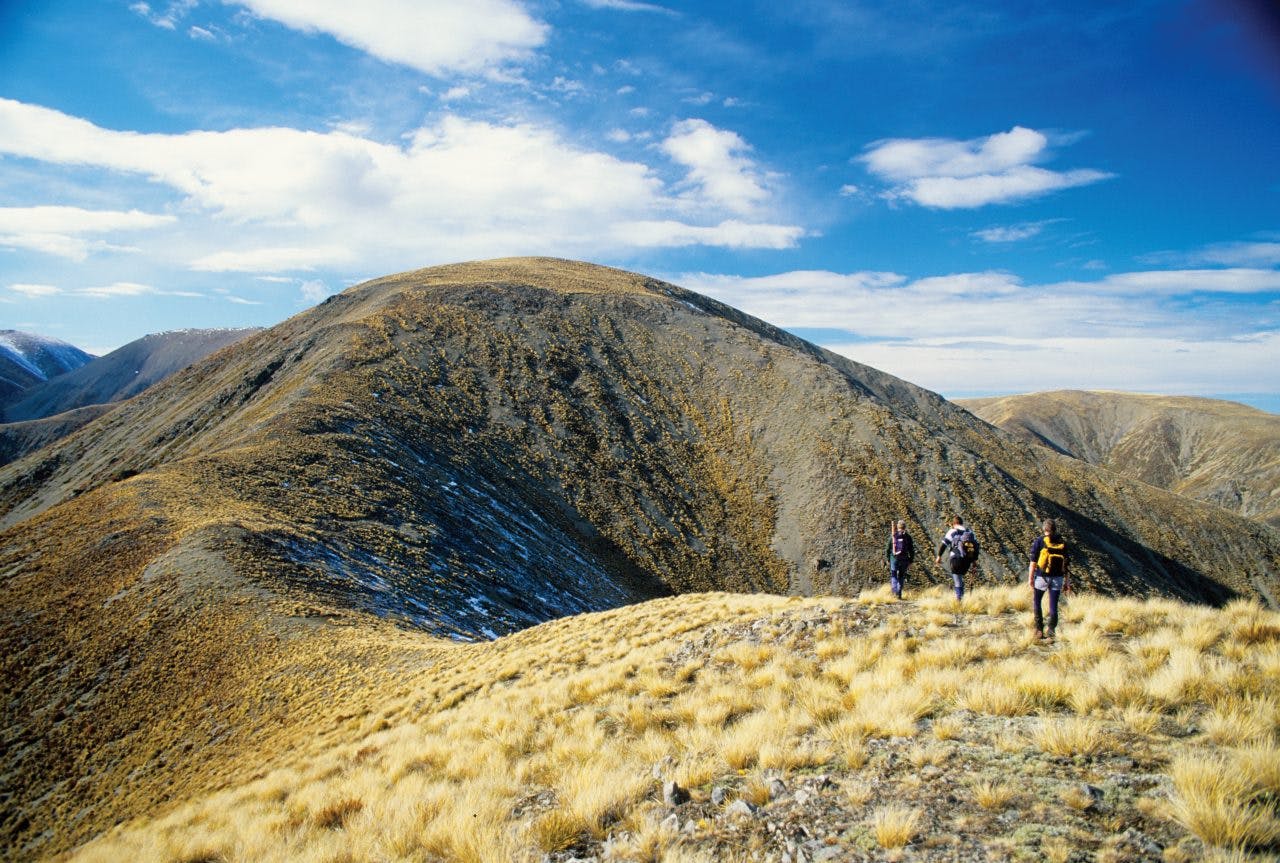 Though not designated as a conservation park this, the smallest of the five areas mentioned here, is of major interest for shorter day and overnight trips.

It sits astride SH73, the Arthur’s Pass Highway, and receives much more attention that its larger and more spectacular neighbours, particularly in the Porters Pass area where a large number of mostly unmarked routes lead to the high, bare tops.

The relatively benign nature of the landscape, largely tussock and scree, allows for many options to be taken for routes on and off the ranges.

Watersheds are small and easily negotiated (though there are only three valley huts) and a pleasing combinations of ridge and river routes can be made in the space of just a day, especially in summer. The park’s pre-eminent route is the Foggy Peak to Castle Peak traverse, a high ridge-top tramp reaching almost 2000m at Castle Peak and making a fine winter outing in good conditions.

However, the region has regular and heavy winter snow falls, which often carry substantial avalanche risk. Easier tramps can be made onto nearby Lyndon Hill or into Broken River Hut on the park’s northern boundary.