Lucky find saves a cold and wet day tripper from an uncomfortable night out, by Josh Gale

For a person at risk of hypothermia, Silvia Horniakova acted with surprising calm.

Lost on Queenstown’s Ben Lomond in the snow last September, the 30-year-old Slovakian opted to erect her own shelter rather than break into a small hut she had found.

“I would need to be in more danger to do such a nasty thing like break in to something,” she says.

Horniakova ran into trouble on a day trip from Fernhill over the Ben Lomond saddle and down to Arthur’s Point.

A friend gave her directions and a tourist map to guide her, but when she reached the Ben Lomond saddle at 1316m it began to snow, the orange markers she was following disappeared and a host of animal trails confused her.

Horniakova quickly became lost and after descending the northern slopes of the mountain thought she was following the Shotover River towards Arthur’s Point when in reality she was near Moonlight Creek.

Seeing a road on the other side of a river, Horniakova crossed over because she believed she would find help further along.

“I thought there would be a hut or some people who would help me, but that road turned out to go on and on and I couldn’t follow it anymore.

“I did a bit of bush bashing and tried to find where I went wrong, but I couldn’t so I decided to find shelter instead.”

Wet and cold in the snow, she searched for shelter in the fading light and came upon a hut and an open wood shed.

“I tried to break into one of the huts, but I couldn’t kick the door in and didn’t want to do any damage so I set myself up in the shelter.”

The shelter only had one wall but there was a roof and two single mattresses, a tarpaulin, old logs and a yoga mat. “It was like I found a magical hut and everything I wished for was there,” she says.

Horniakova put one mattress on the floor, the other against the wall and then draped the tarpaulin around the structure to keep the cold air out.

“I had this big adrenaline high and in my mind there were all these things to do like building the shelter and starting a fire.”

Fortunately, she had brought a lighter so she built a fire by burning pieces of the yoga mat. “It was burning quite well and from that I managed to light one piece of wood, but it took me a long time because it was so wet and cold.

“The fire was awesome so I dried everything and I was just lying in my long johns on the couch.”

A friend alerted the police at 7pm when she didn’t show up to their prearranged meeting in Arthurs’s Point.

A police officer who was part of a search team found Horniakova at 1am when he saw the fire flickering in her shelter. 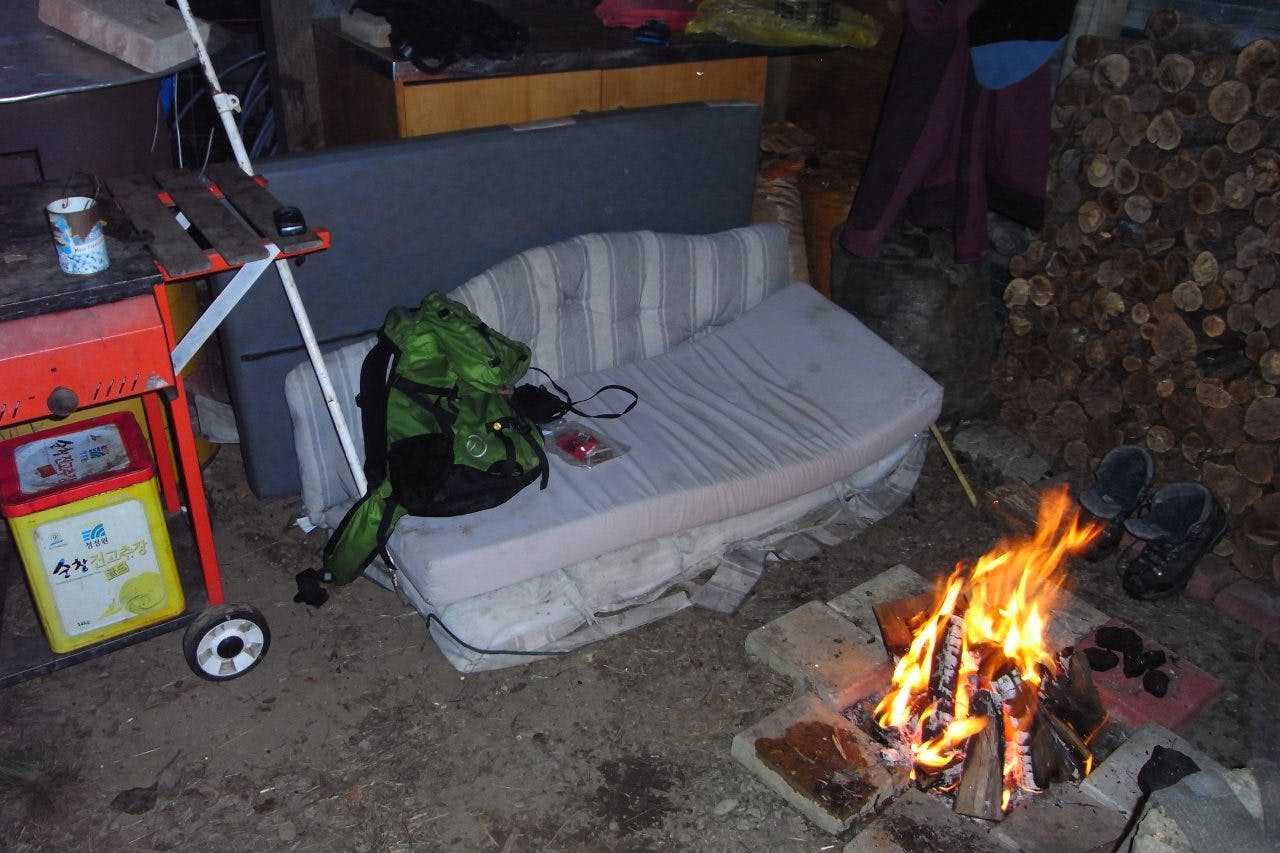 She managed to get herself quite comfortable

“They were joking that I looked so cozy they could leave me there,” she says.

After her experience, Horniakova recommends taking a topographical map and a lighter on day trips. “I got really lucky finding that shelter because it was snowing all night.”

Wakatipu Search and Rescue committee member Ed Halson was among those who searched for Horniakova. He says she set off on her day trip in the face of a very bad weather forecast.

“A big cold blast was due mid to late afternoon. When it hit I was actually working outside and it was bloody freezing,” says Halson who is also an instructor for the Search and Rescue Institute of New Zealand.

People have been lost and injured in the area before and Halson felt Horniakova had too relaxed an attitude about the situation she found her self in. “The incredible perception she had was she was in no danger at all and yet we really feared for her life,” he says. “She could well have died, especially up there at that time in that weather.”

Halson says Horniakova made several mistakes. She didn’t have an accurate map, she didn’t check the weather forecast and she did the trip alone without seeking local advice.

On the positive side, she did tell a friend where she was going and when she was due out. She also had appropriate clothing and footwear, found shelter and built a fire to keep herself warm.

Halson says to guarantee her survival, Horniakova should have broken into the hut. “What’s a window pane when your life is at risk? No one would ever quibble over that.”

Halson says Horniakova went wrong after she crossed a fence and missed one of the track markers because it had fallen over. She then mistakenly followed a stock track down to McConnochie Creek and then went “180 degrees in the wrong direction”.

“We are addressing that specific position by putting in a whole bunch of new markers to make sure that doesn’t happen,” says Halson.

Horniakova’s story brings to the fore rules people going into the wilderness must always follow, says Halson who teaches this lesson throughout the country.

“Let people know where you’re going and when you’re due so you have a panic time. And if you get in trouble cover the rule of threes.

“If you’ve got three minutes of air, you’ll survive so then take care of the next one which is ensuring you find warmth within three hours, followed by finding water within three days and food within three weeks.

“If you cover the rule of threes, you’ll survive and someone will find you, but you must have told someone where you’re going,” he says.