Trampers have taken matters into their own hands to find a safer spot to cross a troublesome river.

Members of Fiordland Tramping Club have searched up and down Mistake Creek, near the Te Anau Milford Highway, to find a crossing that’s safer than DOC’s official crossing on the Mistake Creek Track.

In 2005, German tramper Johanna Kuchelmeister drowned when trying to cross. Since then the tramping club and Kuchelmeister’s family have campaigned for a three-wire bridge to be installed to make it safer for future trampers.

The Kuchelmeister family even raised $15,000 so the bridge could be built, but DOC chose not to do so, saying a bridge wouldn’t be in keeping with the standards for Mistake Creek Track as a backcountry tramping track.

Vice president of Fiordland Tramping Club, Viv Shaw, said although the department can’t build a bridge everywhere there’s an accident, it should build one in this case.

“It’s a tricky crossing because the water reaches the top of your thigh and there are large boulders,” she said. “When we went scouting for a new crossing, we went across the old crossing on what you’d call a normal day, when it hadn’t rained for a while, and one of our party actually slipped over.

“We were told by DOC that a bridge didn’t fulfil its criteria for a backcountry track, but our argument is that there’s a three-wire bridge over the first river on the track – the Eglinton River – encouraging people to continue walking, only for there to be nothing at the next crossing. It seems inconsistent.”

Tired of trying to convince DOC to build a bridge, the club decided to campaign for a safer crossing spot in 2010. The department agreed but no new route was put in place until this autumn when members of the tramping club decided to roll their sleeves up and do it themselves.

They found a safer place to cross 800m downstream from the official crossing and marked a track there with pink ribbon. It’s technically the flood route at the moment but DOC has given the club permission to make it the new permanent route.

Club members will replace the pink ribbon with orange route markers this September.

“Without the club pushing this, we’d never be where we’re at,” said Shaw, but the group would still like to see a bridge over the creek.

“Some people cross the creek after an overnighter heading over U Pass,” said Shaw. “If there’s been a lot of rain, there would still be an issue with crossing the river. In some respects a bridge would open up a new area of Fiordland – it’s a stunning location.” 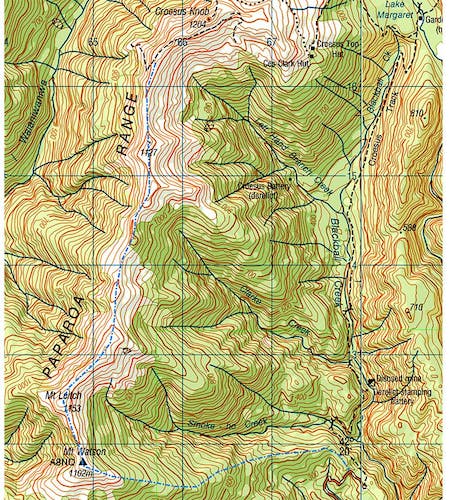 The proposed route (blue line) of the Croesus Loop

DOC is trying to gather support from the local community to build a loop option for the Croesus Track on the West Coast.

The current 7-8hr track heads over the Paparoa Ranges from Blackball to Barrytown and is popular with trampers and mountain bikers for its easy access to the ranges and its mining heritage.

But, to complete the whole thing, transport needs to be arranged at both ends – something DOC’s keen to improve by inviting locals to place a loop option back to Blackball. The track would become part of a longer concept known as the Southern Paparoa Journey

To achieve this, DOC needs community support – something it believes it now has after the department invited members of the local community to show their support for the project.

Community groups are now looking for funding, DOC is working out cost estimates and Coastwide Helicopters has offered to fly track markers onto the tops.

The initial plan is to mark a trail along the ridge from Croesus Knob to Mt Watson and improve an existing forest track from Mt Watson down to Blackball Creek.

One of the groups which has shown an interest in the loop track is Westland Mountain Bike Club, so over time the track could be upgraded to cater for bikers too.

DOC calls in the Army to replace Maropea Forks Hut 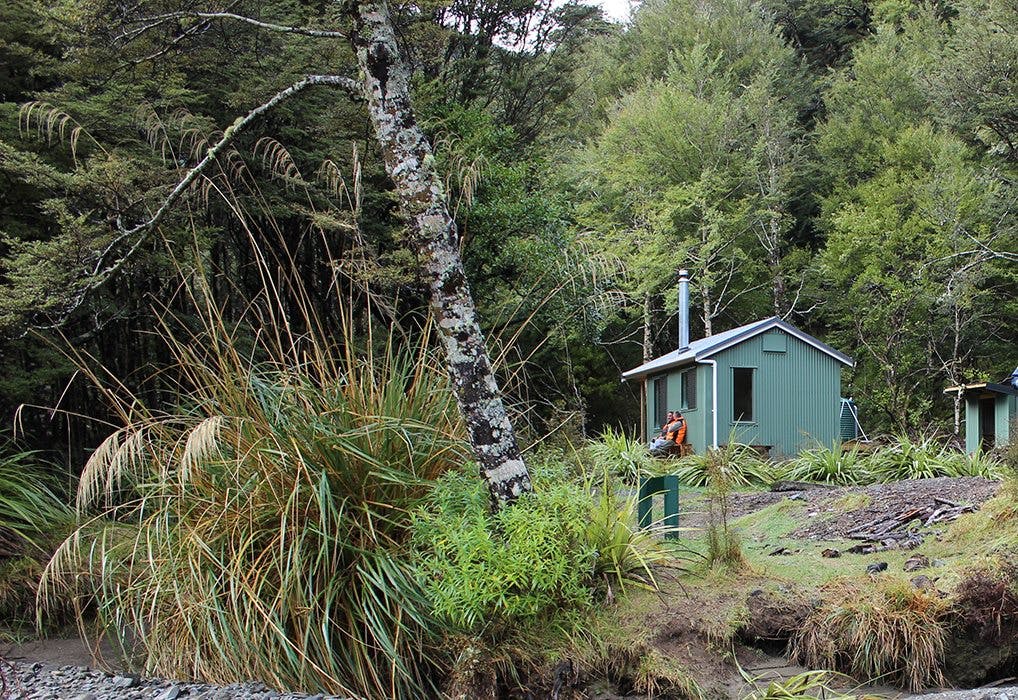 The new Maropea Forks Hut is sited further from the river. Photo: DOC

A new hut at Maropea Forks in the Ruahine Ranges is now available for use thanks to efforts by the New Zealand Defence Force (NZDF).

Situated in the isolated inner reaches of the park, the building of the hut was a chance for the NZDF to practise working in adverse and isolated environments.

“DOC are working more and more in partnership with other organisations, community groups and businesses,” said Chris Lester, conservation partnerships manager. “In this case the NZDF had the capability and expertise to work in an isolated, and at times harsh, environment.”

Like the original hut, the new hut has six bunks but it is sited slightly further away from Maropea River than the old hut. The original Maropea Forks Hut was in disrepair and positioned precariously close to the Maropea River.

The hut is part of the core network of visitor assets in Ruahine Forest Park and is used by trampers, hunters and fishers. It is also a territory of the native whio (blue duck).

Best access to Maropea Forks is via Sunrise Hut and Top Maropea Hut. It is a full day’s tramp (8-10hr) to the hut from the road end, but most parties split the journey by staying at either Triplex, Sunrise or Top Maropea huts. 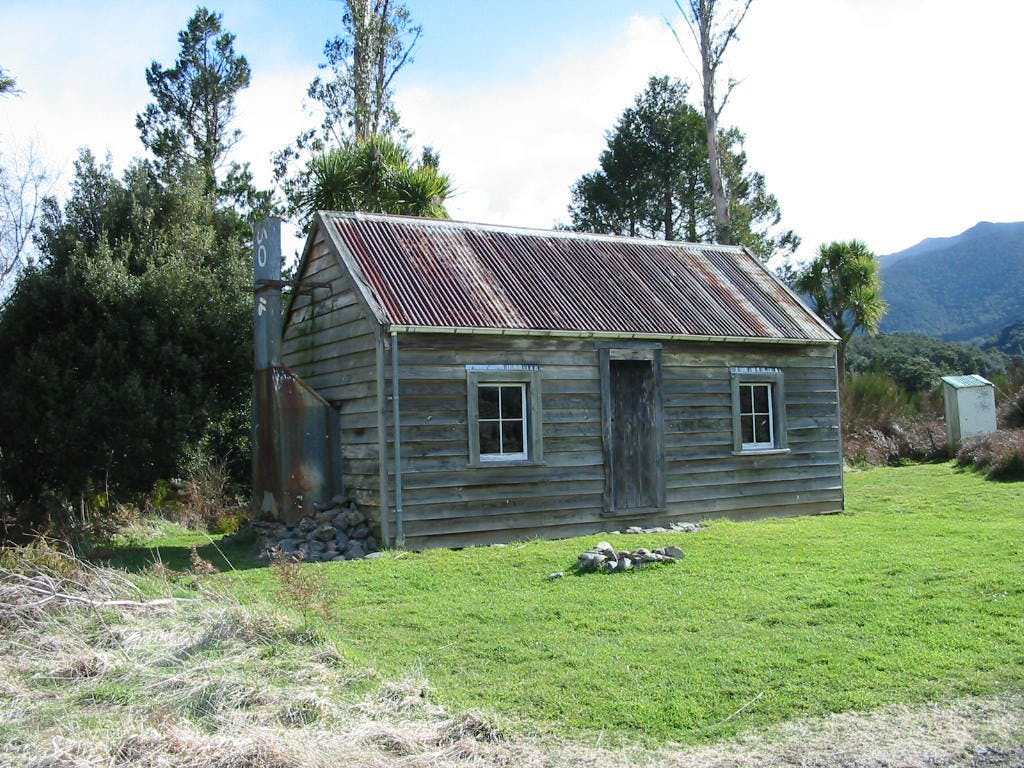 Built in 1864, Ellis Hut is the oldest surviving hut in the Ruahines. Photo: DOC

Sandwiched between the Ruahine and Wakarara ranges in Hawke’s Bay lies the timber-framed Ellis Hut.

The hut gets its name from its association with one of the most famous murder chases of the early 20th century. In 1904, James Ellis was accused of shooting former boss Leonard Collinson in the chest.

Collinson had employed Ellis in his scrub cutting firm but had recently sacked him for killing a red deer without authority.

Ellis had been heard promising revenge and, after Collinson’s death, spent 10 months on the run before being found, disarmed and arrested at the hut.

He was found guilty in Wellington and later hanged.

Ellis Hut, also known as Murderer’s Hut, has since become part of Hawke’s Bay folklore for its association with the murder.

DOC now looks after the hut to maintain its historic heritage.

For the record, prior to 1904, the hut was known as Whitnell’s Hut, after a hunter and shepherd who lived there called Bill Whitnell, but that’s nowhere near as interesting!

Voters may see the words ‘Ban 1080’ on their ballot papers when they head to the voting booth in September.

Campaigners strongly opposed to the use of the toxin are trying to form their own one-issue political party, called Ban 1080.

Wallace says he already has more than 500 names and that the extra drive to create the party stems from DOC’s plans to spread aerial 1080 to fight the expected predator plague this spring.

The predator plague threatens to wipe out some of the rarest native bird species from the mainland and DOC sees 1080, used in conjunction with land based trapping, as the only feasible method to counteract the threat.

The high beech seeding this autumn will mean more food for rats and stoats, which is expected to result in a surge in the population of the pests.

Ban 1080 party’s promotional website promotes the videos made by The Graf Boys, brothers who strongly oppose use of the toxin.