The Te Aaroa Trail officially opened five years ago, and since then, almost 800 peope have attempted the 3000km route. Most start the trail at Cape Reinga in spring, finishing roughly five months later at Bluff, the trail’s southern terminus. The exact number of thru-hikers is tough to pinpoint, but Te Araroa Trail CEO Rob Wakelin tells us it’s grown from just 30 in 2011 to roughly 350 in 2015. This year, Wakelin says he expects up to 500 walkers, based on those who have joined the Te Araroa Facebook group and general word of mouth.

This season, we’re following eight trampers as they embark on the journey of a lifetime. Hailing from all over the world, many have traded in their 9-5s for a stripped-down routine: sleep, eat, walk, repeat.

Bettina Grotschel traded in her cubicle for a pair of hiking shoes, quitting her job of nine years as a marketing manager at an IT firm. Her first journey was in June, when she hiked from Salzburg, Austria to Trieste, Italy, a 500km walk with 50,000m of altitude.

“Now it’s time for an even more ambitious project,” Grotschel says. After reading about the Pacific Crest Trail and other long-distance trails, she chose the TA “as it’s still rather new, the Kiwis and the landscape have a great reputation, and it’s unique thanks to the river crossings, beach hiking and even a few days using the kayak”.

“I am not looking at the Te Araroa as a simple hike to reach a certain destination but I see the trail itself as the destination,” Grotschel says, adding that the experience of long-distance hiking is akin to meditation.  “My ultimate goal is to grow, overcome my fears and become stronger.” 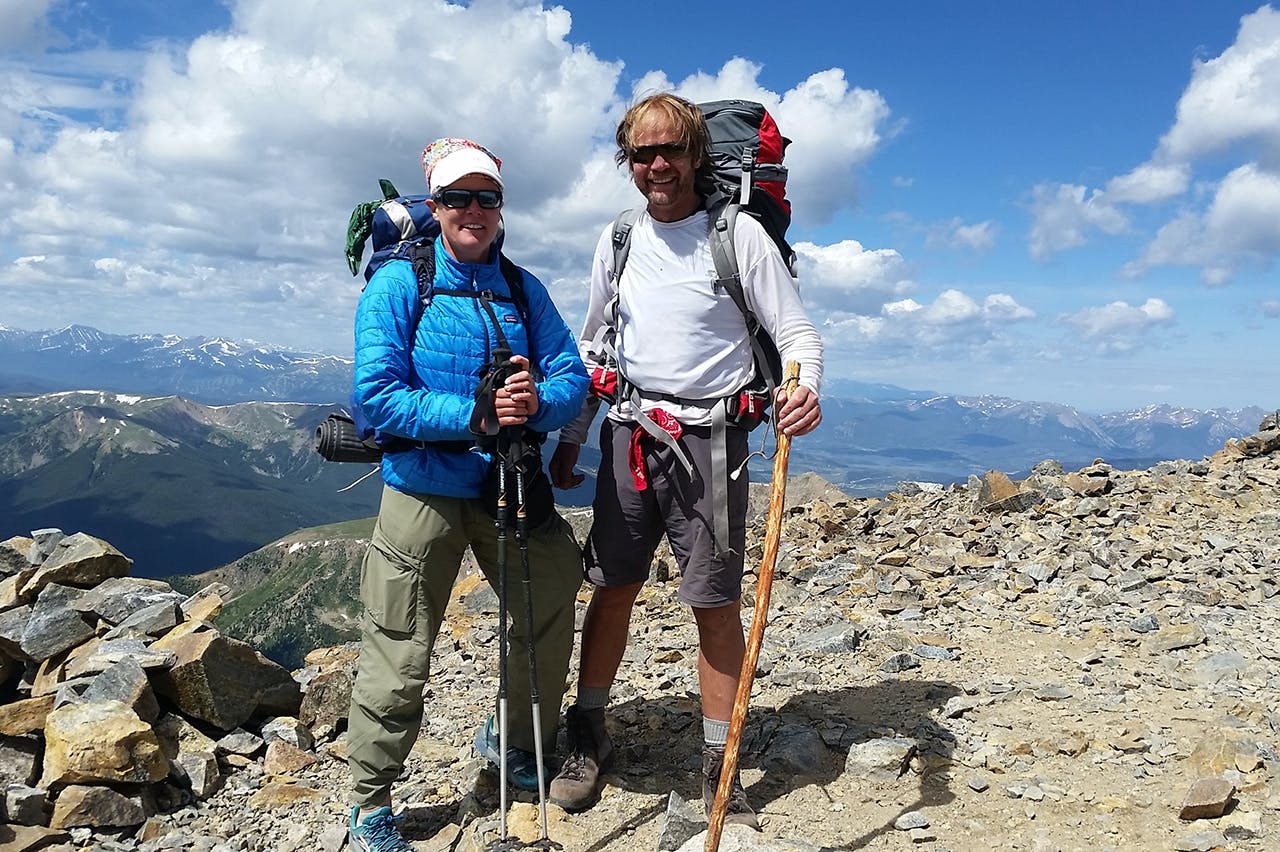 Maria Weinmann and David ‘Boston Bones’ Kleber met when they were hiking the Continental Divide Trail (4988km) in the US in 2015. They’re both thru-hiking veterans; Weinmann has also hiked El Camino de Santiago (800km) and the Pacific Crest Trail (4280km), and Kleber, the Appalachian Trail (3540km).

Kleber had a brush with death after a motorcycle crash in 2009 in which he badly damaged his kidney, broke four ribs and pelvis, and had extensive nerve damage in his leg. Doctors didn’t expect him to survive, but he bounced back with a full recovery, and took on the Appalachian Trail just a year later.

“I like long-distance hiking because of the challenge itself. I like to push myself until I can’t push anymore. I love the simplicity and complexity of nature. You don’t need much to enjoy it,” Kleber says. Weinmann says she’s had her sights set on New Zealand for a long time. “Just looking at pictures, documentaries, reports of other adventurers is not enough anymore,” she says. “We have to see it with our own eyes, have to feel the ground under our feet and have to experience the country for ourselves.” 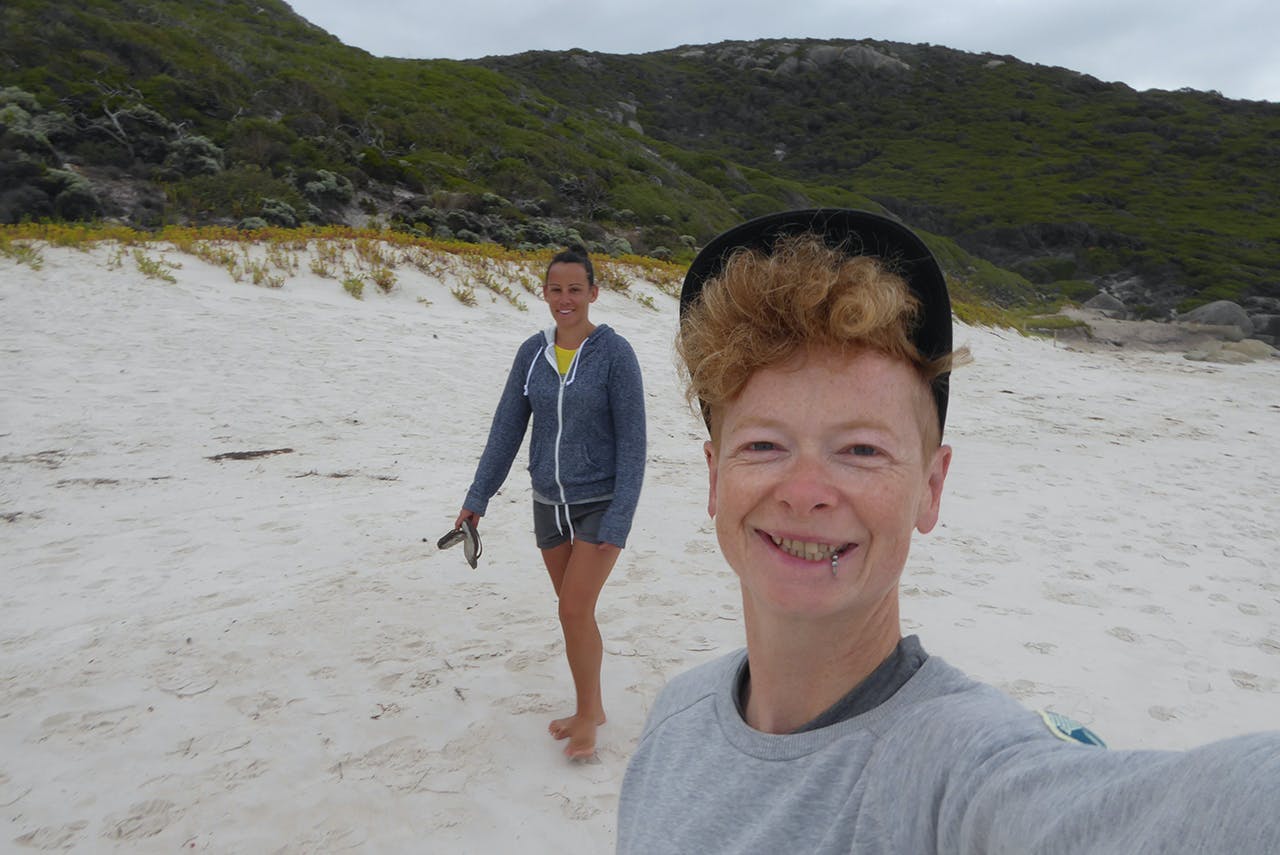 Michelle and Jack at home in the outdoors

Who: Michelle Campbell
Age: 33
From: Wellington

Michelle Campbell and her partner Jack Faulkner consider the outdoors their home. “We spend a lot of time hiking and really wanted to challenge ourselves and see what it will be like spending every day outside,” Campbell says.

Campbell currently works as an environmental health officer for the Wellington City Council. She says she’s been wanting to hike Te Araroa for a few years, and decided she couldn’t wait any longer. “Luckily for me I managed to convince Jack as well,” she says. “I love my job but not the bureaucracy that comes with it. I’m hoping that the trail inspires me to focus on helping others in my own way and gives me time to think about some of my creative outlets, including writing.”

Faulkner, originally from Scotland, is a graphic designer and owner of Cabin Supply Co., an outdoor-inspired line of clothing, bags and accessories. “I’m looking forward to challenging myself to see what I can achieve, and to force myself to live a simpler life at a slower pace,” she says. 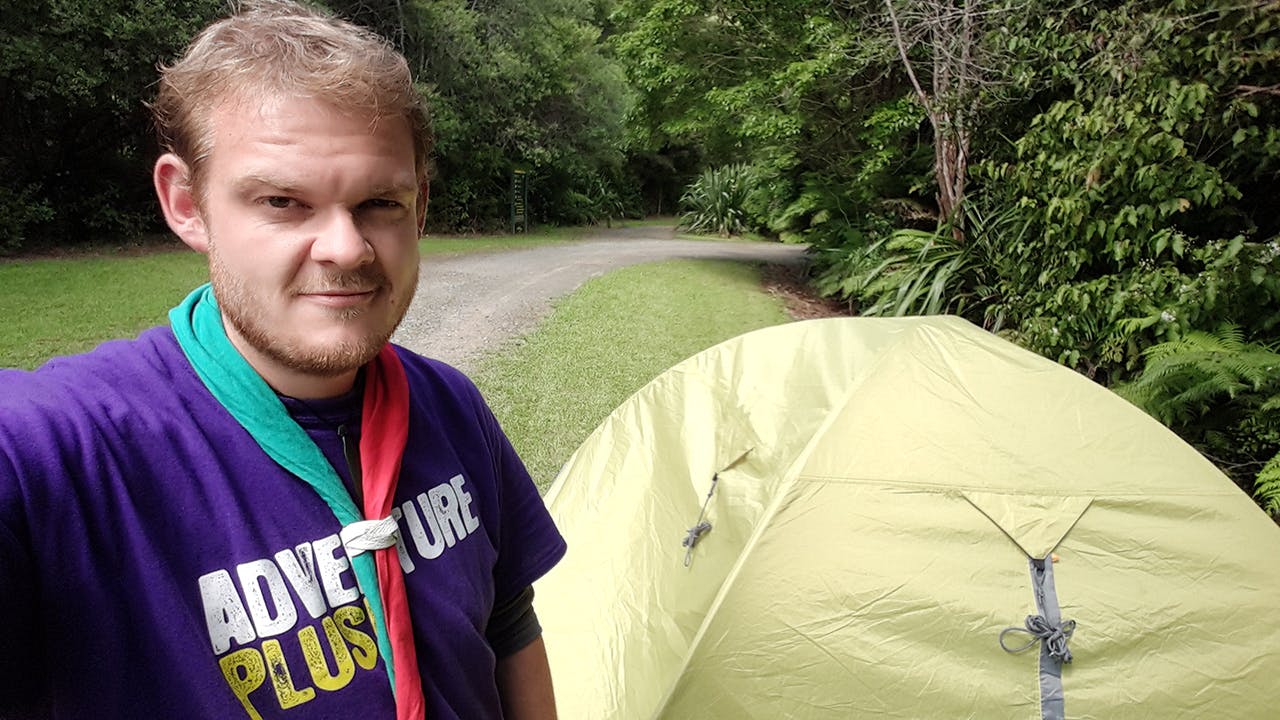 “That’s huge for a 21 year old, or anyone for that matter,” he says. “I was terrified and believed I could never change, that I would stay big until I died a young man, like the doctor told me.”

But after suffering a bout of depression, Thomson realised he was the only person capable of making a change.

So, with support from friends and family, he began making small changes to his life to see if he could lose some weight.

“Some of those changes included selling my car and buying a bike, cutting down the amount of processed food I was eating and cooking healthier and more nutritious meals,” he says.

“I was knocked down but kept getting back up and started to see small steps as a huge win over doing nothing; day by day the weight came off.”

Now, 70kg lighter, Thomson is ready to tackle Te Araroa, which he’ll do on behalf of an organisation he started, Steps for Change. He’ll walk to raise awareness and money to support work with youth obesity, health, fitness, depression and anxiety in New Zealand. 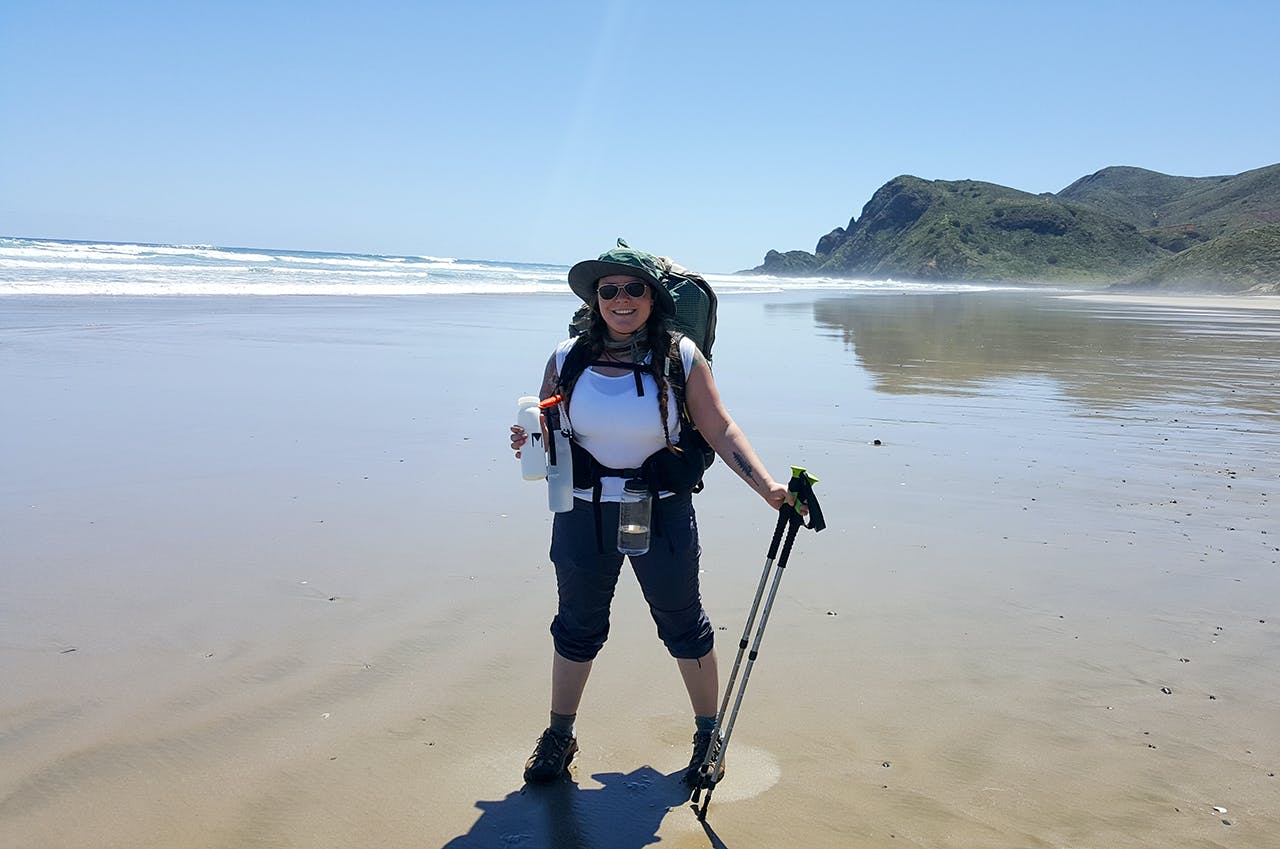 Kayla Schryer is doing what she loves

When asked why she’s doing it, Schryer gets literal. “Because it exists,” she explains. “I can’t stay still, I’m always travelling or walking somewhere. Two years ago I sold my place and everything inside it, I decided to spend my time and money on what I really love, which is new experiences.”

She’s been working at a remote fishing lodge in northern Saskatchewan, which she left in order to take on the Te Araroa.

“I’m happiest in a remote place under the stars or paddling down a lake. I’ve had a lot of people ask what I’m running from – I find this funny and almost want to ask them the same thing. This life just works for me. It’s what makes me happy and what keeps me sane and healthy.

“I’m doing what I love. You never have to retire from that”. 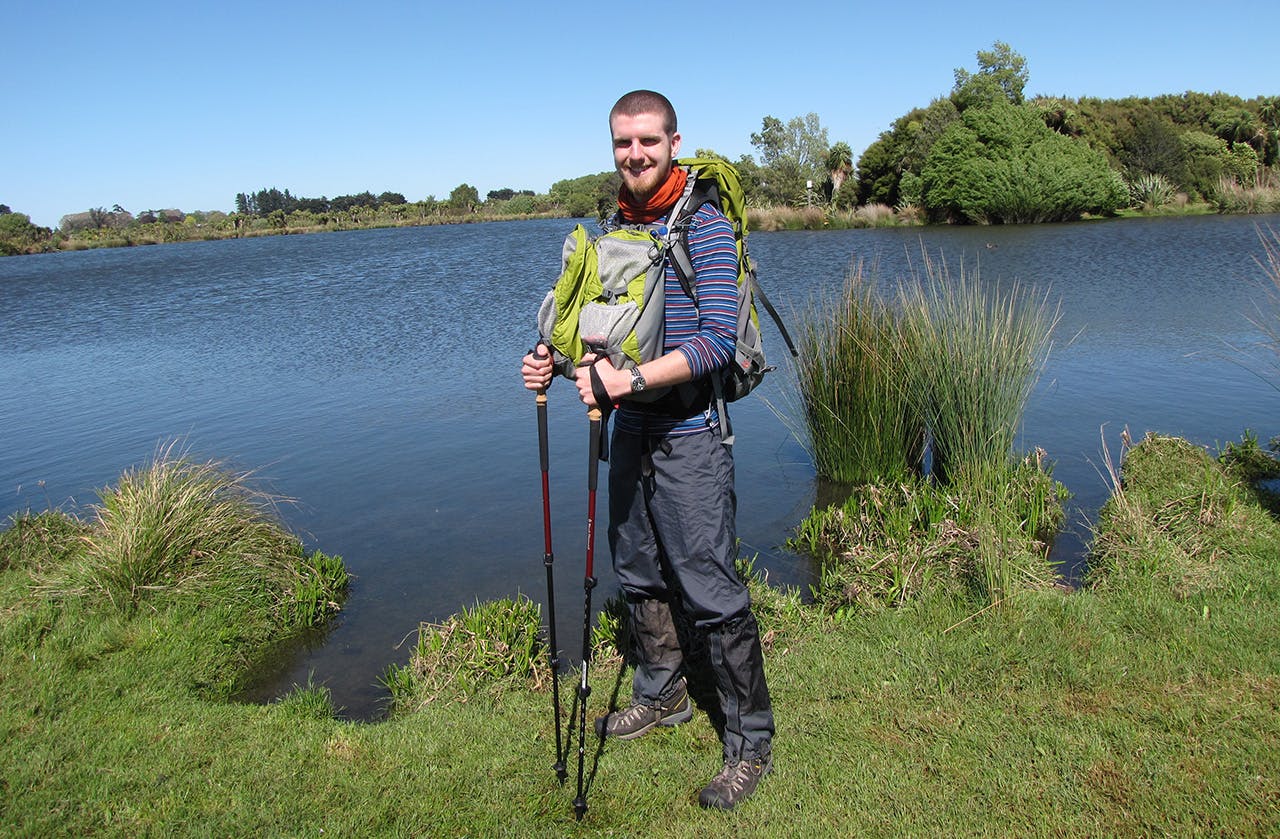 William Penwell is raising money for the Fred Hollows Foundation

William Penwell’s love for tramping was born from his experiences with the 14th Christchurch Boy’s Brigade Company. He’s now studying at the University of Canterbury and working as an optical assistant at Specsavers.

“Working at Specsavers introduced me to the horrors of poor eye health, and gave me an understanding of the debilitating effects of untreated eye diseases,” Penwell says. So, he’s decided to dedicate his walk to the Fred Hollows Foundation, a nonprofit that aims to restore eyesight to those unable to access quality eyecare. He aims to raise $2000 for the foundation through a Givealittle crowdfunding campaign.

“I am immensely passionate about hiking, and revel at the chance to spend a sustained period of time experiencing the diverse landscapes of New Zealand. I believe that I should explore and experience what my own country has to offer before travelling overseas,” Penwell says.