Lake Ohau is one of the more elusive of the big southern lakes. Unlike its larger neighbours, it is not a destination that sits conveniently at the highway.

But exploring the Ohau Range, on the lake’s western shore, was on our mind. The goal was to reach the numerous tarns that dot the tops of this small range and camp beside the large Dumb-bell Lake at the northern end.

We parked our car near Glen Mary Ski Club and started out on Freehold Creek Track, a section of the Te Araora Trail. Checking our map, we noticed the track would disappear into a densely forested valley. The view towards Lake Ohau on a sunny day was too appealing to part with, so we decided to take a detour. We chose points 1456 and 1736 on a spur just north of Freehold Creek as our new destination.

Once we’d passed through a labyrinth of matagouri and gained the bushline, a spectacular panorama opened up around us. The contrast between yellow tussocks and turquoise water was surreal, as was the view of Aoraki/Mt Cook’s distinct summit ridge.

We soon traversed just south of Pt1736 and aimed for the two sheltered tarns at Pt1479. With a forecast of gale force winds we decided to forego a campsite offering views.

After reinforcing our tent with all the guy lines we could improvise, we tucked in for the night. The tent survived fine, but we had little sleep.

The following day was the highlight of our trip. The terrain turned increasingly rocky and steep with the occasional snowfield to cross. After reaching the saddle between points 1834 and 1922 we continued north onto much flatter terrain. Looking at our map we noticed that Dumb-bell Lake was just another hour away.

We found the biggest surprise in a beautiful frozen-over tarn in a hollow between points 1929 and 1922. The circular lake sits in a basin without any outlets. It was still completely covered in ice from winter but had lost quite a bit of its previous water level. This in turn had created a ring of massive sheets of ice sitting on the shore in big, jagged pieces. It looked like a giant fist had slammed into it.

Though it was still early, we decided to call it a day here – trading the tussocks of Dumb-bell Lake for ice and snow. After finding a spot on an ice-shelf that was safely beached, we noticed how we were almost entirely out of the wind and the giant bowl of ice helped to keep us warm by reflecting the sunlight. We prepared our tent, securing it with rocks buried in snow.

The tarn was a perfect launch pad for further exploration. With light packs we ventured around Pt1929 and took in the snow-covered Alps all around us. As day stretched into night, we enjoyed an hour of colourful alpenglow.

The next morning we retraced our steps to our first night’s campsite, then followed the route down Freehold Creek. The track faded in and out so we made sure to follow the widely spaced poles.

Once we met Freehold Creek Track we were finally on the Te Araroa Trail and followed it back through the forest that we had successfully avoided on our way up making quick progress on the well-maintained track. 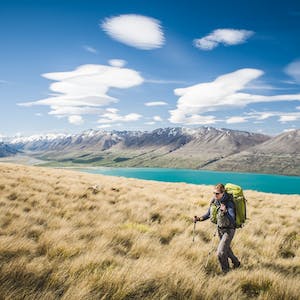 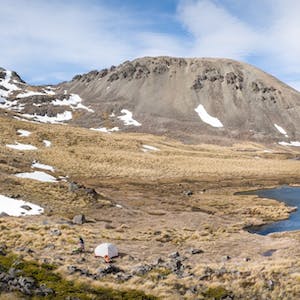 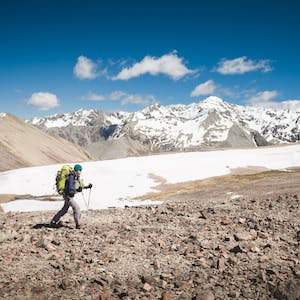 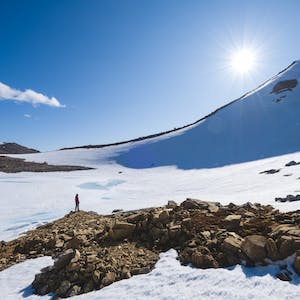