If you’re looking for a round-trip overnighter and you’re up for two big days, Arete Hut is definitely worth the effort. It’s a two-bed charmer nestled in some of the Tararuas’ highest peaks. For me, the route to and from allowed me to pass over the remaining four points above 1500m in the Tararuas I had yet to reach – there are 15 in all.

Before setting off I’d consulted experienced Tararua trampers who confirmed my intended route was mostly on a well-worn trail. But I was warned about the ‘worst trail in the Tararuas’ – that which leads to Arete Forks Hut from Cow Creek Hut.

It was easy going from the car park, over the Blue Range to Cow Creek Hut. The journey took just four hours and from the hut I could access the tops via Cow Saddle with the plan to walk all the way around to Lancaster (1504m). This would give me my final four high points, having passed over Bannister’s low (1513m) and high (1537m) peaks and Arete (1505m) on the way. I would then descend Pinnacle Spur to Arete Forks Hut and walk out to my car.

There are plenty of other sections along this route that demand care and concentration. In the course of my two days I was on the move for 25 hours and ascended and descended at least 3500m. While it’s hard work along the ridge between Waingawa (1423m) and Arete, the views are worth the effort. Being on some of the highest of the Tararuas’ tops, there can be expansive vistas in every direction.

By the time I’d tagged the top of Arete it was nearly 6pm, 12 hours from when I set off from Kiriwhakapapa campsite that morning. The wind had strengthened considerably, so it was a pleasure to shrug off my pack on the second of the two bunks at Arete Hut and fire up a brew. The hut is in good condition, with its own water tank and throne just a little down from the tussock bench where it’s situated. The hut commands a beautiful panorama, framed to the left by Bannister and to the right by Lancaster, taking in a sea of layered ridges stretching out across the Wairarapa.

On day two, the first stretch south to Lancaster was easy and a joy to walk in the early morning sunlight. Lancaster is one of the easier 1500m points to finish the list of 15, but satisfying nevertheless. My immediate concern though, was not knowing just how tricky Pinnacle Spur would be to descend. The view on the approach looked near vertical in a few places. 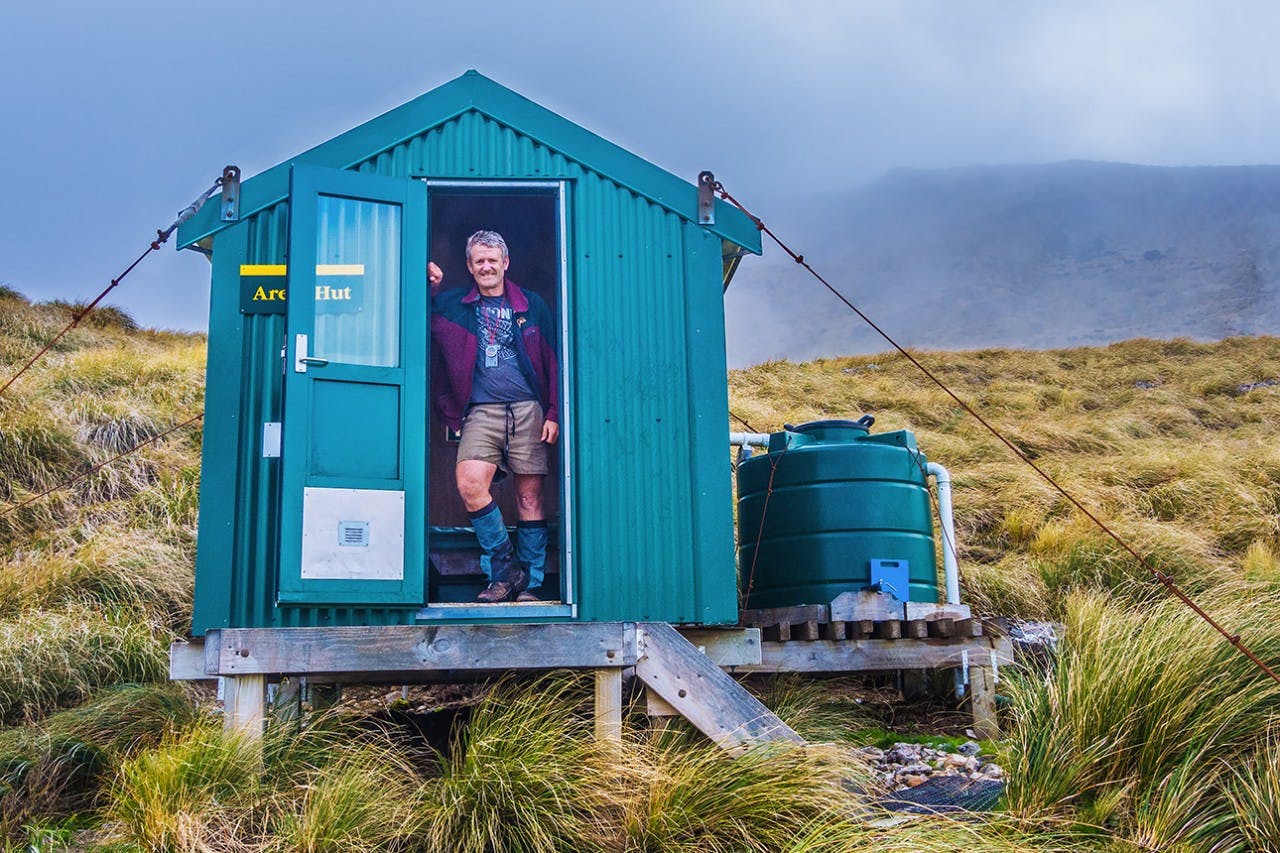 As it turned out, the steepest section was coming directly off Pinnacle itself. Nowhere was it as challenging as the steep sections north of Bannister, although below the bushline, it was relentlessly, toenail-destroyingly steep.

Wading barefoot across the Waingawa River, to reach Arete Forks Hut soothed things down a bit after nearly four hours of toil. Now for the ‘worst trail’. But, how tough is ‘worst’?

After a brew it was time to face the music. For the next four hours I ascended from, then descended to, streams that have cut deep gullies into the valley wall. Six streams, six ups, six downs, adding at least 500m of ascent and descent. And not easy going – very steep, loose rubble, root infested and sometimes obstructed by big, shattered, storm-felled trees. Keeping to the route demanded concentration and delays. Though not having trodden all the Tararua’s trails, I can believe this is the worst.

It was a relief to reach Cow Creek Hut (490m), where I knew all that remained was a four hour slog over Blue Range.

It had been a big two days, befitting the effort needed to reach the 15 1500ers of the Tararuas.