The North Face claims its Futurelight fabric is the world’s most advanced breathable/waterproof outerwear. Alistair Hall took to the mountains to find out if it lives up to the hype.

Four hours into the second day of my Tongariro Northern Circuit hike, I stopped for a rest. With my pack lying face-down beside the track, I noticed the large sweat stain on the back panel.

It was a striking illustration of just how breathable The North Face Summit L5 LT jacket is. Since starting out that morning in late July from Waihohonu Hut in a long-sleeved base layer and lightweight Polartec fleece beneath the jacket (I was also wearing the matching pants with baselayer leggings), I had walked non-stop and at times felt hot and sweaty, but mostly remained in a comfortable temperature range.

I had worn the same clothes the previous day when I climbed from Mangatepopo Road end to Red Crater in 30km/hr winds and a -9℃ windchill. Frozen rain was flung horizontally by the wind on the climb from South Crater, but was not felt beneath the jacket and pants. The wind sliced through my gloves, leaving my hands so chilled I had to force my fingers to grip my ice axe, but I was still warm because the wind didn’t come close to penetrating my outerwear.

Later that night, I walked for two hours in the dark to reach Waihohonu Hut. The temperature for that part of the journey was hovering around zero. There’s a big hill to climb before reaching the hut and when I topped out, I was hot and sweaty, but by the time I reached the hut 30-minutes later I was dry and warm. 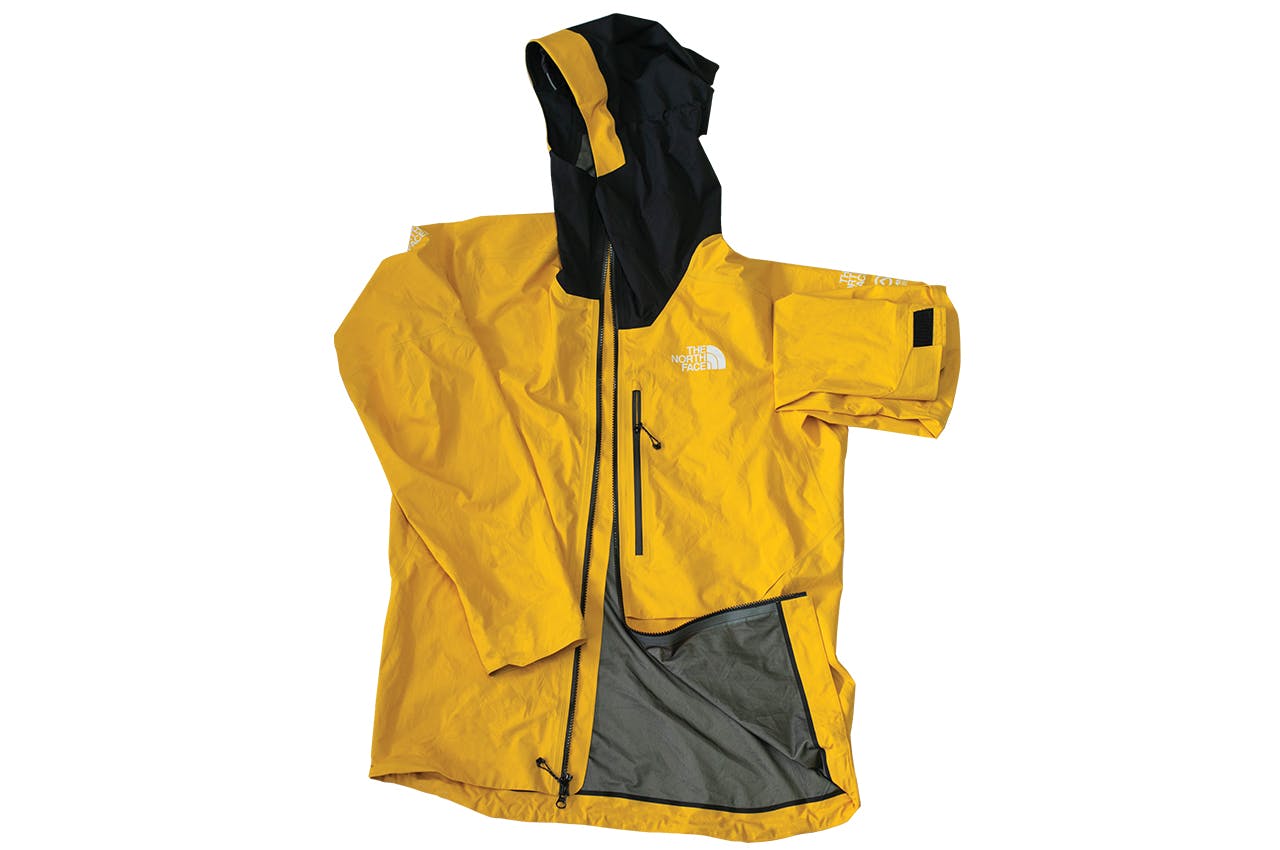 On paper, Futurelight looks like any other three-layer fabric: a waterproof/breathable membrane is sandwiched between a more durable face fabric and a soft lining. But that’s where the similarity ends.

Futurelight in the form of the Summit LT L5 jacket and pants is supple and improbably light. The fabric is polyester, with the membrane created through a nano spinning process where polyester fibres are extruded from 220,000 microscopic nozzles and laid in a sheet with nano-level holes, creating breathability while still maintaining waterproofness. The holes can be increased or decreased in size depending on the garment’s end use.

TNF has also developed its own breathable stretch seam tape – which is actually a big deal. Traditional tape hampers breathability and stretch, but that’s not an issue for these FutureLight garments.

Most jackets I’ve used have underarm pitzips or large mesh-lined pockets to help vent heat when the jacket gets stuffy. But the Summit LT L5 doesn’t have any of these features and it doesn’t need them.

I found the jacket to be a good length, hanging below the bum. It was roomy enough to wear layers beneath and the helmet-compatible hood is huge – though I found it pulled back from my forehead whenever I tightened the single rear drawcord. It was also tricky to manipulate the drawcord while wearing gloves because it can get ‘lost’ beneath its storm flap.

The jacket has two large pockets – one exterior chest pocket and an interior mesh pocket. 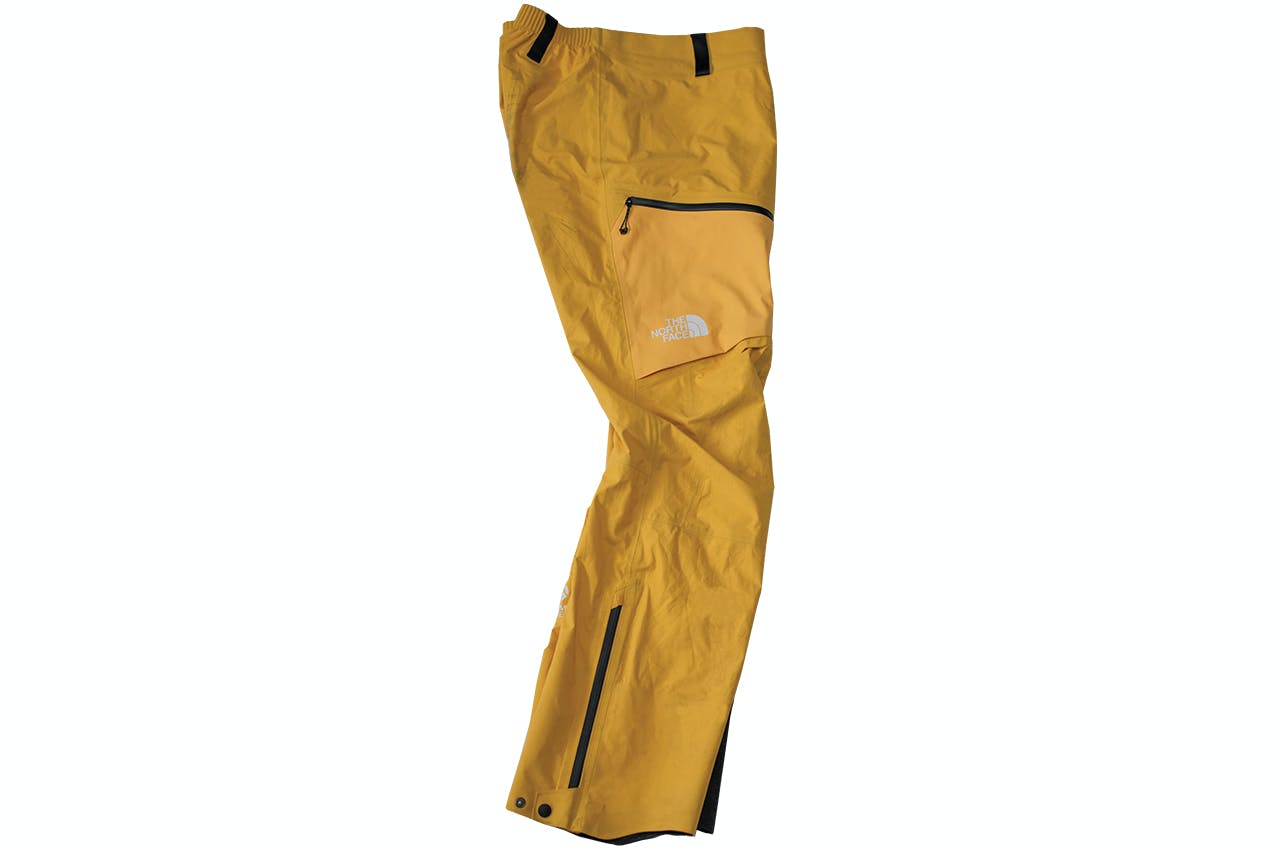 The pants have one pocket on the upper right thigh. A firm elastic waistband held the pants in place without the need for a belt.

On the final leg of my Tongariro trip, I went off-track for 3.5km. It involved scrambling down gorges and waterfalls and bashing through scrub. The pants protected my legs from scratches – a hard-wearing kevlar crampon patch helps. But the leg cuffs and seams around this kevlar patch were showing signs of abrasion by trip’s end. The pants got filthy and though the mud washed out, a shadow of the stains remained.

That’s an indicator of where these garments belong: in the mountains. I did my initial testing during two days of backcountry and resort skiing in Colorado on a TNF-funded trip. In sub-zero temperatures, I worked hard to skin uphill and found the breathability to be exceptional. And because that kind of environment doesn’t include crashing through scrub, they looked as good as new after two days of use.

Is it the world’s most advanced waterproof and breathable fabric? If it’s not, it’s pretty darn close.

Verdict: Easily the most breathable garments I have used. They handled tough weather and intense activity. The transfer of moisture through the fabric is evident – which left me feeling drier, warmer and more comfortable than I might otherwise have been. But, they’re super light at a cost to durability and they’re expensive. However, if you get out often and take care of the garments, the gains in comfort will outweigh the cost in no time.

– FutureLight garments will be available in New Zealand in October.