Hawea-based adventurer Mark Sedon says completing a groundbreaking expedition through Antarctica in January was one of the hardest trips of his life.

Hunkered down on the Antarctic Plateau, thousands of kilometres from anyone, with a storm raging outside their tent and the mercury dropping to -35℃, Mark Sedon and his two travelling companions were probably the most isolated people on Earth.

The Kiwi adventurer has just completed a harrowing 50-day, 1700km journey in which he scaled a previously unclimbed face of granite spire Spectre (2020m) and kite skied across the frozen continent.

Sedon says the trip was tough from the beginning.

“A few hours after being dropped off, just over 200km from the South Pole, we got hit by 74km/h winds, and it was -35℃ before the wind chill, so things got very real, very fast,” he says.

For the first two weeks, the trio – including British expedition leader Leo Houlding and French alpinist Jean Burgun – were hammered by bad weather. The temperature dipped to about -60℃ with windchill and they endured tough terrain, dragging 180kg sleds for 300km to reach the mountain ranges. That’s when the real challenge began – climbing Spectre was a 21-hour slog through deteriorating weather.

“The climbing was really hard,” Sedon says. “It was what you’d call perfect granite, with very few cracks in it and the weather kept getting worse and worse. It wasn’t the kind   of climb you stopped to enjoy.”

The peak had only been climbed once before, by an American team who flew in as part of a geology expedition.

But Sedon said the most dangerous part of the trip was navigating crevasses while being dragged along by large kites.  One of the team’s sleds fell down a crevasse, dragging him towards the icy abyss before the rope attached to the sled snagged on a knot. Later in the trip, an icefall appeared out of nowhere, and the entire group was pulled into it.

“We were going downhill, so we couldn’t see it until we were in it. The pulks [sleds] were sliding in front of us, dragging us down, while the kites were dragging us forwards.” They had to eject their kites to stop and were then able to haul themselves off the icefall. 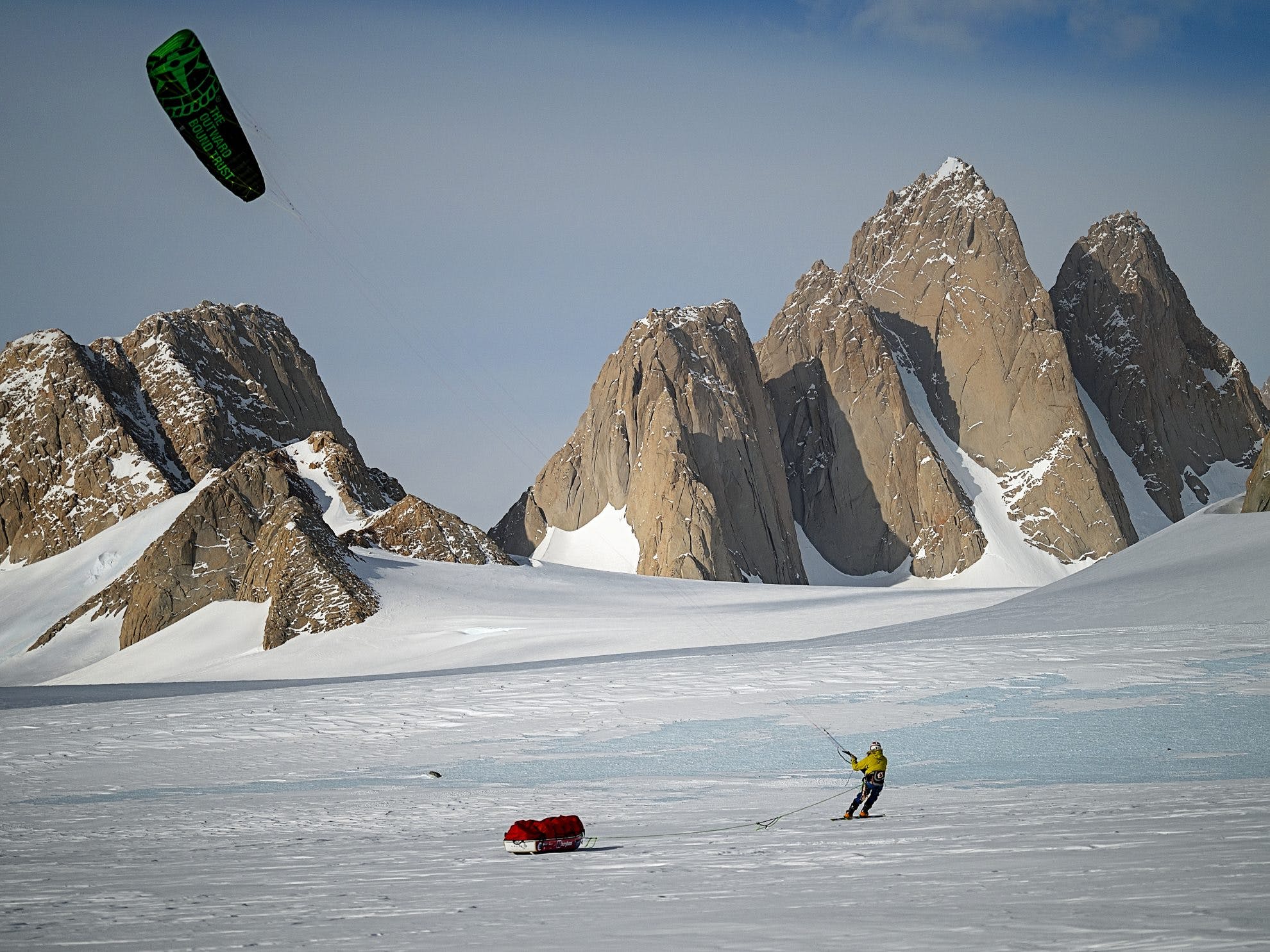 The team kite-skied to Spectre in remote Antarctica,

“Every day had different challenges, but I enjoyed every minute of it,” Sedon says. “It was more beautiful than I was expecting. The big flat Antarctic Plateau had many different moods and surface conditions.

“When you’ve got the right gear on, you’re pretty warm and you’ve got everything you need on your back and in your pulk – it makes you appreciate the simple things.”

On fine days, they were able to travel more than 200km by kite and in one four day sprint covered more than 650km.

So how does he cope with being in such a harsh and isolated environment?

“You try not to think about it too much. Don’t worry about the things you can’t help and just try be in the moment.”

Sedon works as an alpine guide for his day job and has been to Antarctica 10 times previously. He’s climbed six of the ‘seven summits’, including Antarctica’s Vinson Massif (4892m) five times and Mt Everest. But he says this latest expedition was probably the toughest of his life.

“Every day was hard, and it was a long trip. The big difference was we were trying something new, kite skiing to a mountain range and back again for 1700km. No one’s actually done that in Antarctica before. They usually just kite to the South Pole, or back.”

And now onto the next adventure. Sedon is guiding a ski-touring group in Greenland this month and will be back guiding in Antarctica later this year.