The outdoors is an amazing classroom full of challenges, rewards and lessons for those who go searching, writes Cambell Bennett.

My wife Hayley and I have been tramping with our children Alana (13) and Jamie (10) all their lives.

What started as an almost Himalayan logistical exercise is now our highest-quality family time. We sing, talk, laugh, tell stories and enjoy long periods of mindful silence. We’ve realised what our children want most from us is our time and attention, undistracted and complete. We’ve also realised the kids love challenge and adventure. Not in a masochistic sense but by going places where few others do.

This article started as a letter to the editor some time ago after we met Sarah White and her partner. In her Wilderness story, A night under a drunken sailor, she mentioned having met a family who’d done the High Route through the Dragons Teeth. That was us. It was great to meet Sarah and we loved her article, but I wanted to add a few details just in case other families thought ’what a great idea!’.

Many readers will probably think we’re (mainly me) mad to take a 10-year-old across such an exposed route. It’s riddled with cliffs and has resulted in at least one helicopter rescue. At several points on the trip, I shared that view. But the kids didn’t. They remember the risk, difficulty and great sense of achievement.

We flew by helicopter to Boulder Lake Hut. Definitely cheating, but it was a Christmas present and the first time in a helicopter for Alana and Jamie. The scenery on the flight was amazing. Most of the Dragons Teeth route is in the Douglas Range Wilderness Area so Boulder Lake is the only point you can be flown to. We had a lovely day mooching around the lake and hut, making friends as others arrived and playing cricket on the beach. 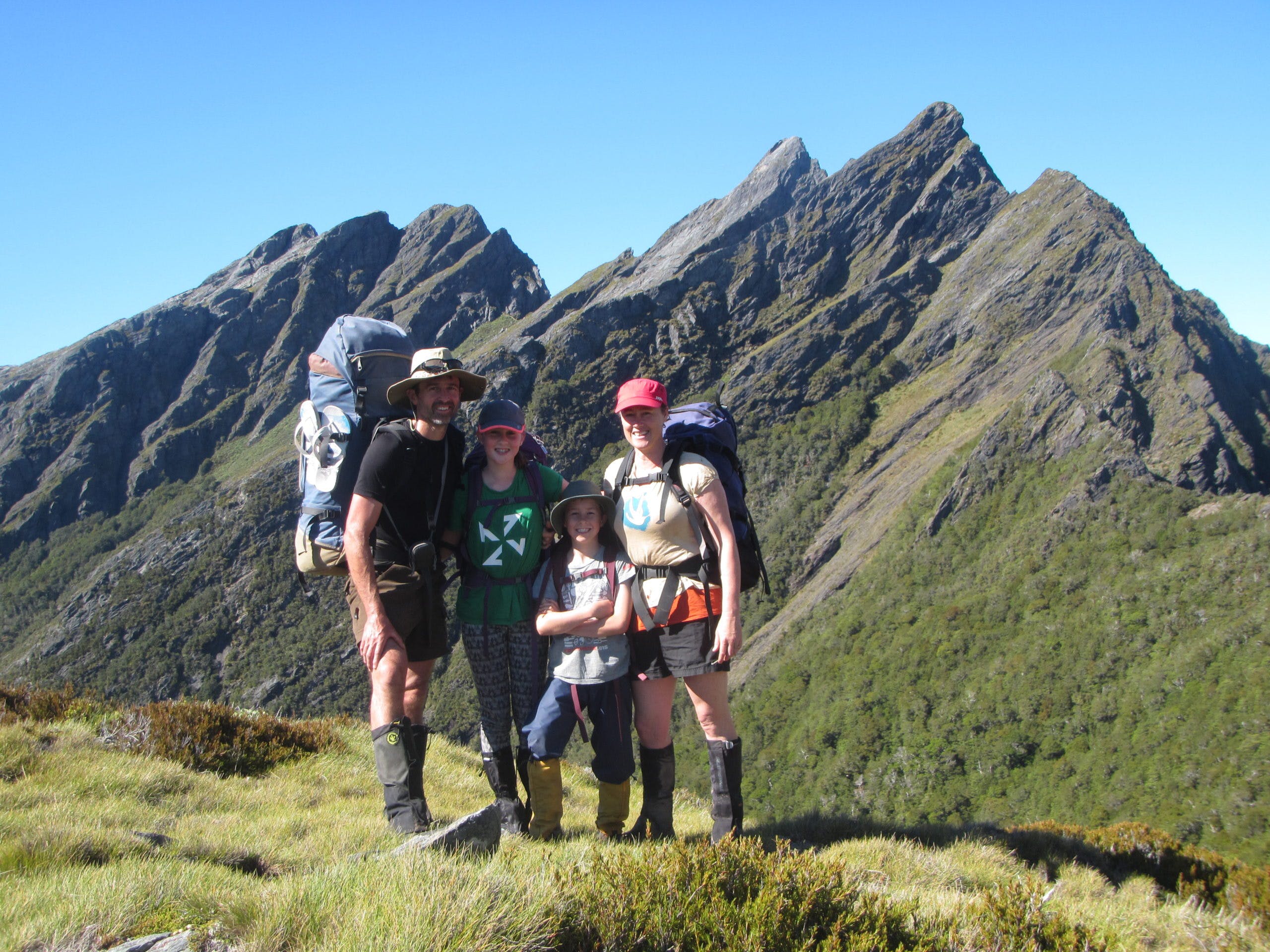 The Bennett family of on the Saddle above Adelaide Tarn looking across at the Dragons Teeth. Photo: Cambell Bennett

Two days later, the morning was bluebird and we were on the saddle above Adelaide Tarn Hut looking across at the High Route of the Dragons Teeth. I’d been there three years previously so knew what lay ahead. We were going well and had committed to the Douglas Range traverse rather than bailing out down the Anatoki.

“What do you reckon?” I asked Jamie, our youngest, smallest and the one who says he’s afraid of heights. The family had decided that Jamie needed to look at what was visible of the route. If he didn’t like it, we were going to avoid the exposure and go low.

Finding specific information for the High Route isn’t easy. But that’s appropriate. For what it is, it’s well marked and if you can follow it, you’re probably experienced enough to be there. A series of cairns, with the odd knotted flax leaf, lead along the ridge south of Mt Douglas when the route starts to sidle around the teeth. It goes up, down, around and is wonderfully intricate. Eventually, it exits the truffula tree forest (as the kids called mountain neinei) onto an old slip. It’s firm underfoot but steep and alongside the amazing view, the sense of exposure grows dramatically. We were going well though and were happy when we got back into the trees.

A fresh slip had my alarm bells ringing. It was steep and full of unbalanced football-sized rocks. A goat took off, sending rocks everywhere. Alana jumped from rock to rock while Jamie took it more cautiously and held Hayley’s hand. 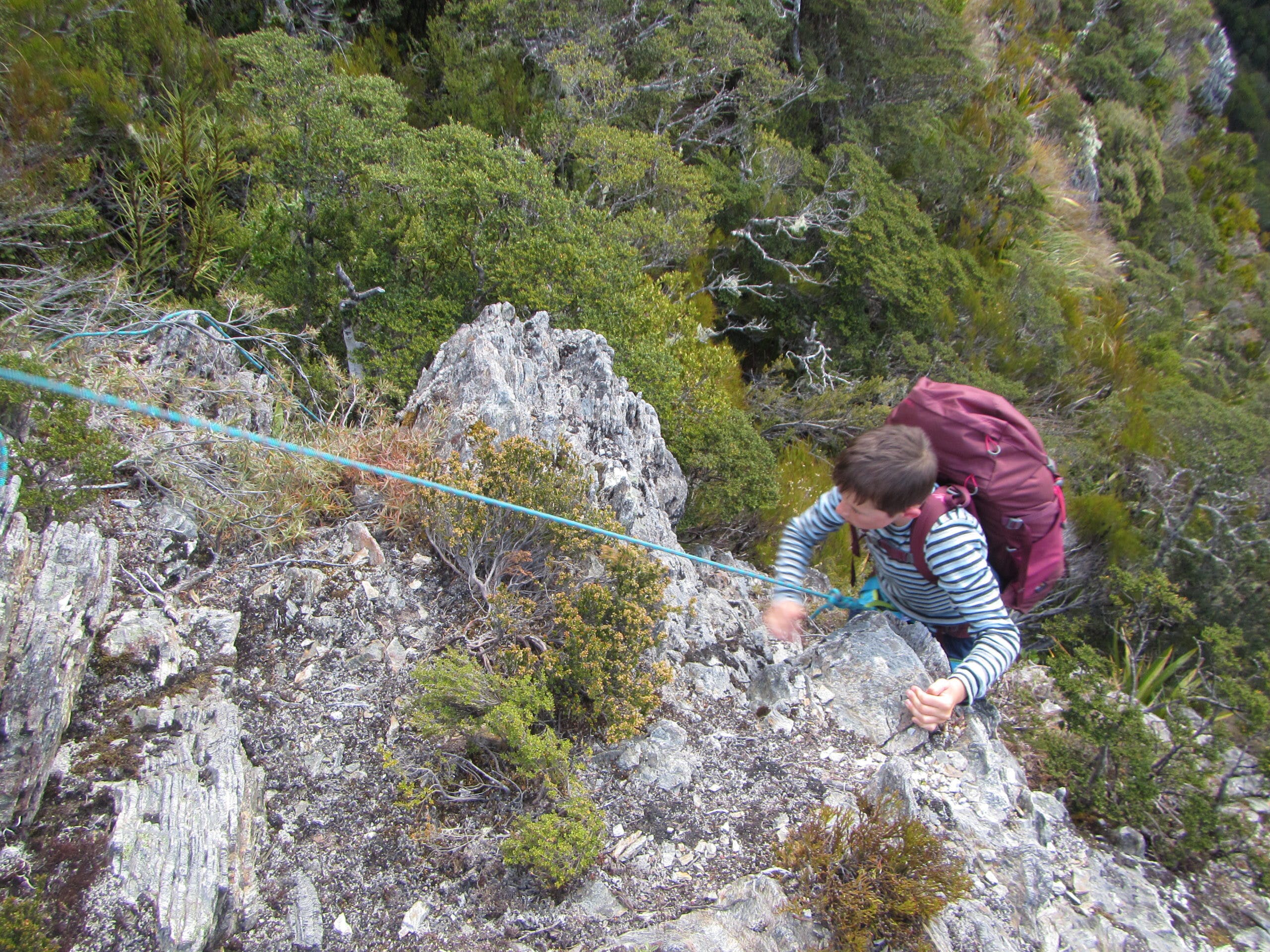 Jamie on belay for the final ascent. Photo: Cambell Bennett

Emerging from the slip, we were all concentrating hard on grabbing foliage that helped us to stay in contact with the route. The traverse led around a buttress and then to amazing views of a couple of trampers not far ahead. They were standing at the top of a large cliff waving at us. It was lovely to see them, but I was quietly horrified. The cliff was maybe 50m high, totally devoid of foliage and had a dodgy-looking fixed rope linking up ledges and scrambles. I had no recollection of anything like that on my previous traverse and it looked hard, dangerous and incredibly exposed.

Our resolve wavered but, at the foot of the cliff, I found the red markers I’d followed on the previous trip. They didn’t go up the cliff but instead traversed around its base and out onto a foliage-laden ledge.

Jamie was still pretty scared but didn’t want to backtrack.

We were at the crux. The ledge traverse is dodgy. There is good foliage to hold onto and we had our packs purposely as small and light as possible. But it felt like clambering across monkey bars with about 200m of air underneath.

Hayley pointed out the madness of what we were up to. She was feeling OK, but briefly burst cried as she watched Jamie clambering around.

At the sight of his mother crying, Jamie pulled himself together. He told her not to worry and was fine from that point on. Alana was delighted with the adventure but not with seeing her parents stressed, so she had a short cry as well.

We didn’t have any tissues but we did have a rope, so we started using it. I put Jamie’s harness on and gave him the reassurance of a belay. 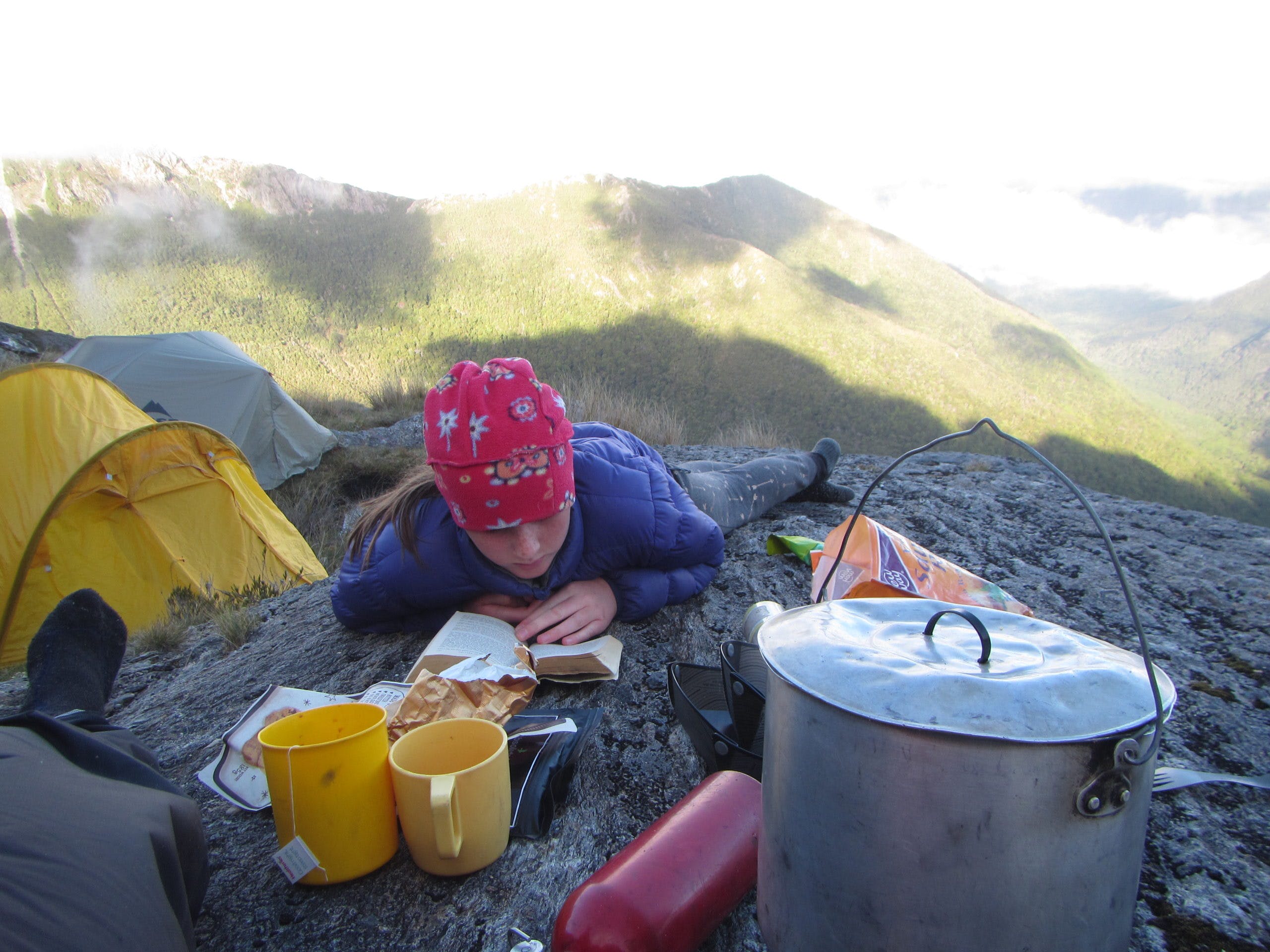 Adrenalin levels remained high but tears had stopped as we came around the end of the buttress and clambered up grippy rock slabs to safety.

Between the cliff bands at either end, there’s a stunning beautiful tussock-filled basin at the base of the Dragons Teeth. We paused here to soak in the views and the ambience – we felt like insignificant dots dwarfed by the landscape around us.

At the end of the basin, a stream drops into oblivion. Underwear in a tree marks where the route re-enters the bush and the dodging and weaving resumes. Again, there are lots of cliffs but the route joins safe lines between and around them.

Now sidling eastwards below Anatoki Peak, we had the views across the Anatoki to Yuletide Peak and back where we’d come. Looking backwards, the cliffs we’d been traversing were hundreds of metres high. Terrifying and impressive to look at.

We hadn’t needed the rope since the ledge traverse but I got it out for the final climb onto the ridge off Anatoki Peak. There was a lot of exposure but the foliage was good to hold onto and climbing vertically made belaying easy. We were mostly having fun now, yet I shed a tear of relief that we’d made it through safely. It had taken 10 hours to travel 4km.

We camped by tarns on top of the ridge with grand views in all directions. Clouds rolled in below and we felt deliciously divorced from the rest of the world. Jamie found a stick and coerced me into a game of cricket. 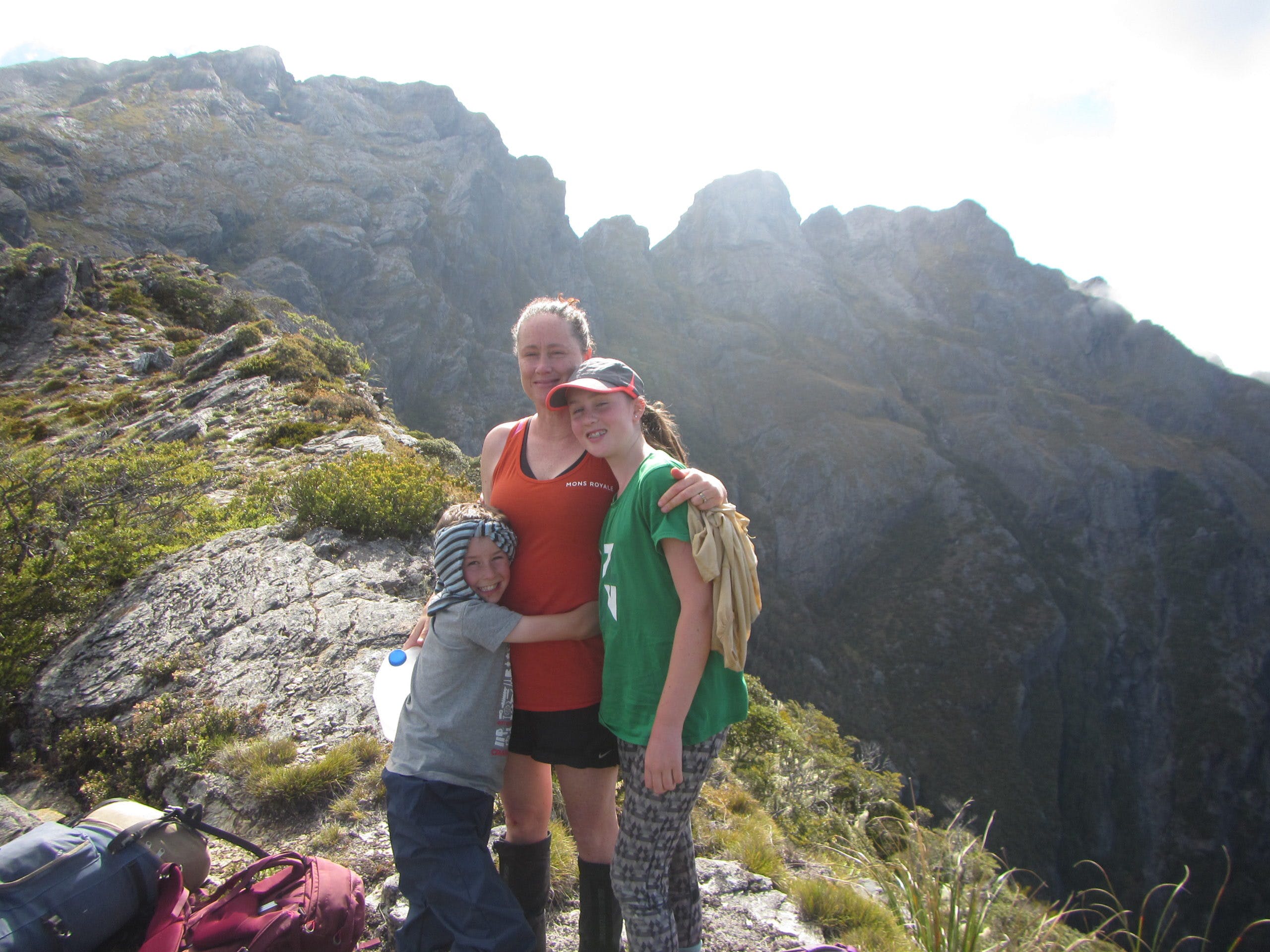 Relief to finally be safely through the guts of the high route. Photo: Cambell Bennett

It’s still a long way for 10-year-old legs out to the Cobb Valley. We enjoyed it over three days and made the most of the fine weather, kea, chocolate bars and cheese toasties. We swam and Alana and Jamie made up a story so funny it put my lame dad jokes to shame.

We do lots of off-track tramping and on this trip we had amazing weather, rope, slings, harnesses and the knowledge and inclination to use them. Despite that, I’d hesitate before recommending taking pre-teen kids through the Dragons Teeth High Route. The risks are significant and juggling risk versus reward with your children isn’t the same as with your peers.

Last month, I took Jamie and two of his mates tramping in Whirinaki. Some trampers we met asked him what his favourite tramp was.

“The Dragons Teeth,” he said without a moment’s thought.

So then again, maybe I’m not the right person to ask.