Around 60 huts are scattered around Ruahine Forest Park, most of them built in the 1960s by the Forest Service to shelter deer cullers who went bush for weeks on end.  Stanfield Hut is one of these huts and was named after George Stanfield, a local landowner. It’s two hour’s walk from the road end, so is popular as an overnight destination for families or, as in our case, a four-hour loop walk.

It starts with a five-minute walk to a picnic area with a shelter, barbecue and a fairly hideous concrete block of toilets.

We chose to walk the Holmes Ridge Track to the hut. This meant first crossing the Tamaki River – an easy, dry-feet affair in low flow.

There is a steep initial climb through regenerating native forest before the track reaches the ridge and an old farm road, open and wide. Apart from being a bit rutted in places, it’s an easy undulating walk for about 50min, with native bush on one side and scrubby farmland the other.

The track gets to a wide turnaround bay at which point there is a sign indicating 45 minutes to Stanfield Hut. The track is narrower from here and soon enters the bush as it descends to the Tamaki River West Branch.

The descent is far more gradual than the initial climb to the ridge and crosses a couple of small streams before eventually starting to follow the river. 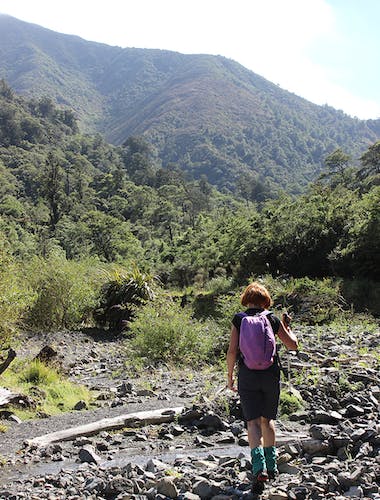 Soon we came across an old set of signs, one to Stanfield Hut with the arrow directing trampers further along the river. But this is incorrect, as the track now drops to the river at the signs and crosses it to where orange arrows through patches of bush can be followed for a short time. Then it is a matter of making your own way up the river.

After about 15 minutes we felt we must be close to the hut but there were no obvious orange triangles. We reached a small side stream on our left (on the true right of the river) and scanned the area, spotting some pink tape tied to bushes. We headed up this stream a little and found a large (very faded) orange triangle hidden behind a tall shrub. A short steep climb took us to a terrace and within a couple of minutes we had reached Stanfield Hut.

The hut is a very tidy eight-bunker, and after a leisurely lunch stop, enjoying the sunshine on the grassy space in front of the hut, we set off back. this time following the river.

On this day the river could barely have been called a stream, so we managed to keep our feet dry for part of the way. The route criss-crosses the river more than 60 times, so in higher water flows it would be quite exhausting. The riverbed is fairly wide, quite barren and coated in weeds, including plenty of willow. But looking up the sides of the valley, surviving native giants such as rimu and kahikatea break the skyline with their grandeur.

At one point a slip had come down, sadly taking a giant rimu with it.

As we got further down the river, the bed narrowed and we found ourselves having to duck under or stretch around more obstacles, keeping an eye out for an easier alternative route off to the side.

But there was never any concern about getting lost as long as we stayed close to the river and eventually we saw the big orange triangle that marked the track back up to the picnic area.