It was raining. Wind driven and sweeping down the valley in a great grey sheet. Scungy weather for sure, but we were dry and snug under a spacious biv boulder, the scene framed by the solid angular entrance of the rock shelter.

While we mulled over the scene it occurred to me about the number of nights I’d spent in the hills under rocks of one sort or another – a tally of 80 fairly easily counted. A biv-bagger without knowing it!

Biv boulders. What a great invention! No hut passes, low maintenance, character-filled, landscaped and decorated, come in all shapes and sizes, the odd one with standing room, often with fireplaces, some even completely dry. And none of those annoying DOC warning and danger signs. Fire up freely! Ventilation no bother! Drink the drips!

There’s got to be something primeval about them too. Hunched over a tiny fire of twigs, the dirt, close and, well, dirty, blank walls of rock in every view. Basic and timeless.

Of course they’re not the Taj Mahal. Some biv rocks are little more than dungeons, dark, low, leaky, claustrophobic, head-battering, especially for baldies like me. The floors? Rarely flat. With any luck maybe sloping only in one direction. No insect screens either. Even if there is a fire spot and firewood, often the smoke will be enough to preserve you, although your lungs might not last quite as long as your skin. 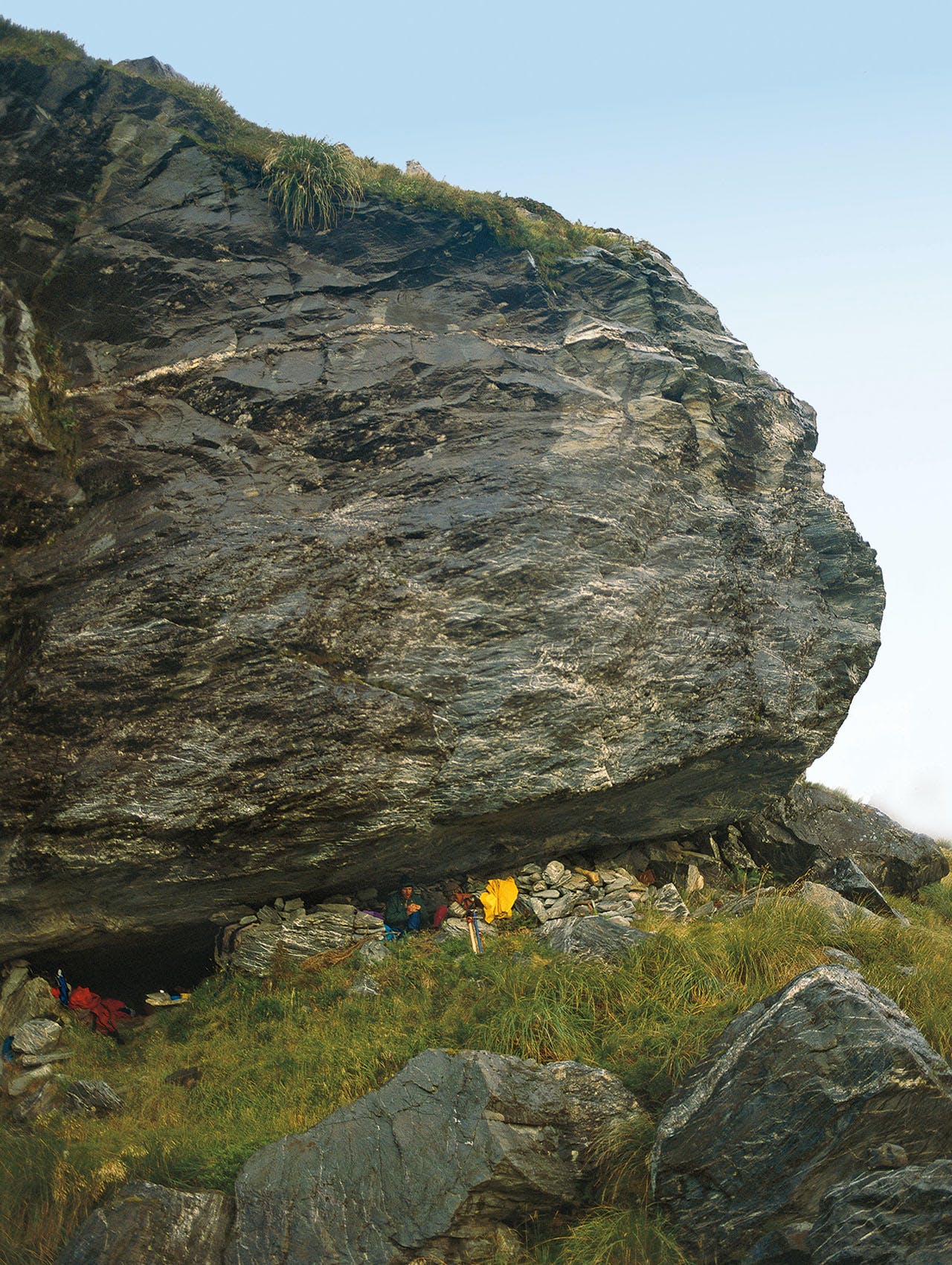 But desperate times can call for desperate measures. On really bad weather trips, grovelling through thick bush, sodden and sorry, there are few brighter, uplifting sights than a dry biv boulder to shelter under.

There are a number of rock biv types: solid bedrock, also called caves, overhangs (hangovers my wife calls them) and rock shelters and rude shelters, according to an old tramping friend. Then there are rocks pushed and shoved by glaciers to decorate the slopes and rocks avalanched off steep country.

Of the zillions of lumps of rock poking through the ground or strewn around mountain slopes or valleys, a tiny few make it to be called home to outdoor types.

So many are too small, wrong-angled or shaped, too steep, too swampy or rocky underneath, too far from water, too hard to get to or in the wrong place for staging.

Our ancestors, Maori or Pakeha, knew a good rock shelter when they saw one. Before the decadence of huts and soft, warm things, they were often the best shelter around and sought after, especially when there was rain about. Explorers thrived on them. Brunner, Heaphy and Kehu made use of them on their trip down the West Coast in 1846. Charlie Douglas used many. Gold miners hunkered under them wherever they were handy. I remember a tramping trip in the upper Pomahaka Valley in Southland, where goldminers of the 1860’s had made homes of the rock overhangs lining the valley. The romance and reality of Arawhata Bill and his biv rock, we looked for on a trip through the 10 Hour Gorge and never saw. Mind you, there’re an awful lot of rocks around the 10 Hour Gorge. The early mountaineers like Green, Fyfe, Clarke, Turner, Fitzgerald, Harper, found and used biv boulders like the ones on Haast Ridge, De La Beche, Scott Creek, Turners, to name a few. Along came the deer cullers, hunters and trampers to add to the collection.

There are many well known and visited rock shelters, although biv-baggers aren’t as common as hut baggers. Some are officially named on maps. Moirs and other guide books mention and grid reference many.

Among the famous in the South Island, for the rock student, are The Rock of Ages in the East Matukituki, Ballroom Overhang in the Fox River Valley, Turners Bivvy and Pawnbroker Rock in the Tutoko Valley, Gridiron Rock Shelters, Growler and Spludgeons Rock in Kahurangi National Park, Arawhata Rock and Cave Camp in the Whitcombe, North Moeraki Biv and Marks Flat Biv in the Hooker/Landsborough Wilderness area, Doughboy and West Ruggedy rock shelters on Stewart Island. 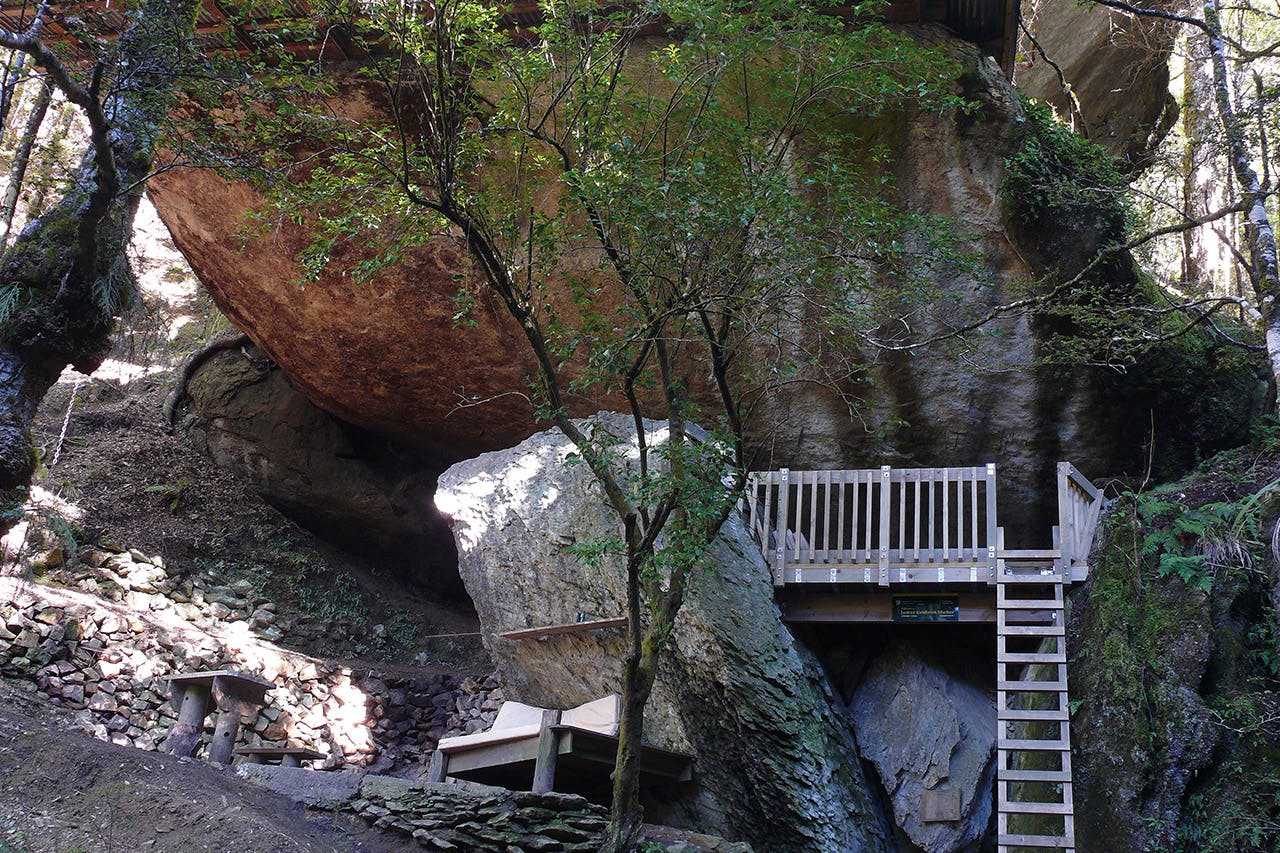 Some have wonderful views, although you’ve usually got to get out from under the rock to see them. Try the biv above Tunnel Creek Hut in the West Coast’s Paringa Valley, or the Marks Flat rock bivouacs at the head of the Clarke River. Then there’s Upper Rockburn Biv and Turners Bivouac nestled amongst some outstanding natural real estate close to Mt Tutoko in Fiordland.

Some, and special thanks here to the hardy types who gardened away at the raw rock and stacked and re-arranged piles of boulders, have semi-permeable wind and rain breaks. Good on you mates!

Is there a perfect biv rock or overhang? Yes there is – it’s in the right place for your camp and has plenty of space for all to sleep, stash gear, mill around and stand up without bashing your head. It’s sheltered – waterproof even in wind-driven rain. A flat, dry floor is a luxury. As is grass or fern bedding. There should be a good spot for a fire, with fuel nearby and a source of water is ideal. A great view tops it off.

I’ve had some memorable times sleeping under or visiting rock bivs over the years. Abseiling into a canyon to find beneath an overhang clay figurines of human heads and horses neatly placed on slabs. One time I found a nearby tree inscribed with initials and the year 1908. There was one wild time in the mountains with record rain when our tramping party split into two as one lot passed the other lot, invisible to each other in the downpour. Their lot had the tents and the primus while our lot had nothing. Two of our party were coming down with mild hypothermia and there we were, with darkness fallen and unable to find a track to get us out. Fumbling along, with minimal torch power, we managed to find a small rock overhang where, wet through, including our matches, we suffered out the rest of the night. Matches dried in the nice long hair of one of the women in our party to help revive us next day. (I learnt a few things that trip!)

On another trip – yes, wet again – our tramping party slept under a big overhang where all noises were muffled by water dripping off the rim. I left our candle stub and my precious leather-covered watch on a rock beside our sleeping bags. Next morning the candle and watch had disappeared – replaced by a few rat droppings. We searched in all the spidery, remote parts of that overhang but the watch is still there somewhere. 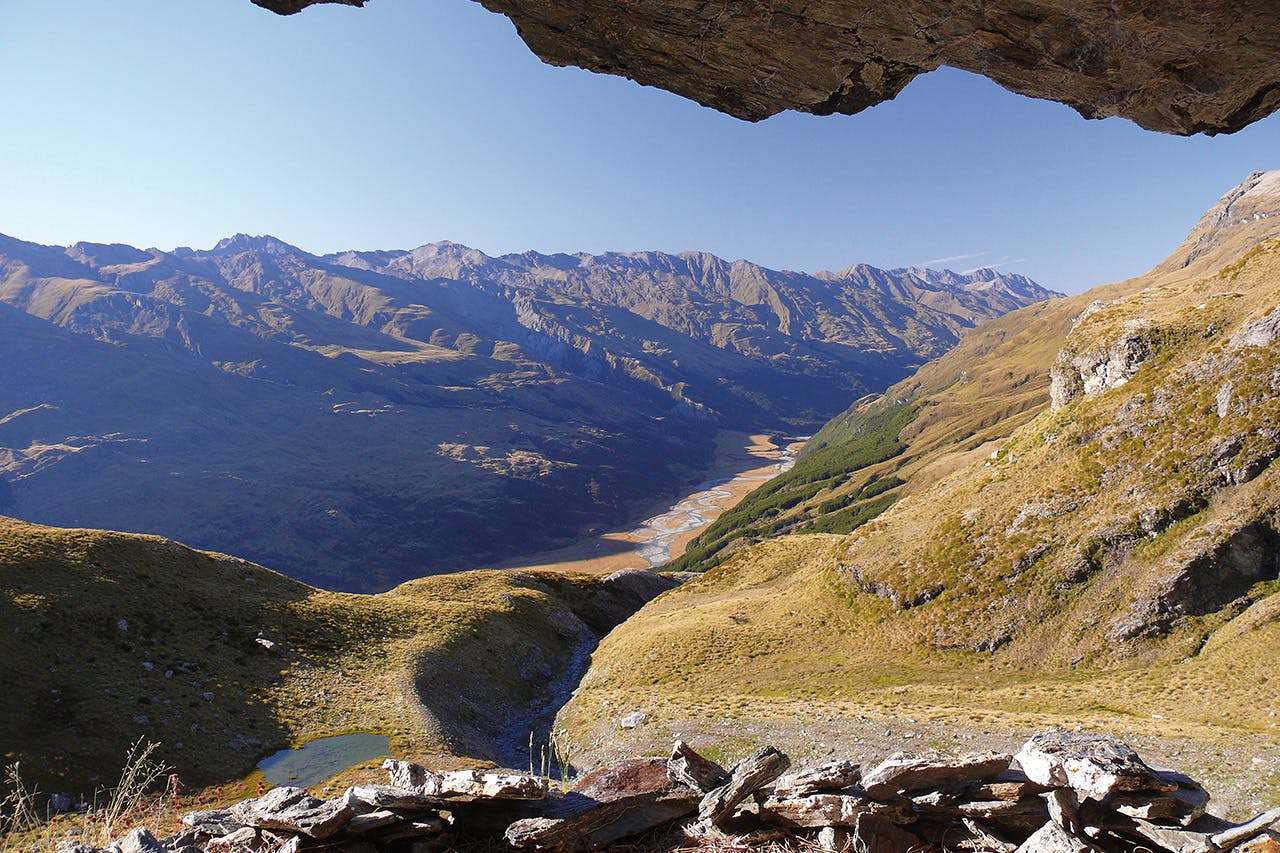 I’ve encountered plenty of wildlife during my nights in rock bivs. Some were pleasant, like the two nights I spent half under a biv rock in the head of the Hokitika River below Mathias Pass and was regularly visited by a pair of rock wren. But others are less so. I had to help dispatch three ‘tame’ food-thieving possums at the biv above the Welcome Flat hot springs at the end of a tramp over Copland Pass. Someone held the torch while I wielded the ice axe. At least we got three nice dark brown skins worth top dollars at the time.

Of the 80-plus rock bivs I’ve visited, my favourite is probably Painted Cave, a limestone overhang off the Inland Road, near Kaikoura. There the smoke curls up a 20m high sculptured wall, perfectly sheltered and heat reflective – a place with a great atmosphere.

If you fancy doing a trip where you stay in a rock biv each night you could try the Five Passes in the Otago Alps, just north of the Routeburn Track. The trip starts and finishes in the Route Burn and takes in the Dart Valley, Beans Burn, Olivine, Hidden Falls Stream and Rock Burn. Not all the bivs are weatherproof and a tent is still needed, but the whole thing of 5-7 days can be planned around nicely placed rocks.

All of the good things about biv rocks are there to satisfy the most ardent connoisseur, unlike the experience of these poor trampers:

So with great expectations they tramped in the rain,

Drenched and cold, but morale high,

As they planned a good night,


Imagine their horror when they arrived to find
A shattered pile of rubble.
A tiny ‘doorway’ into a dungeon, all of 50cm high.
A lumpy floor,
Water trickling down its walls.

‘Maybe a dry space for one’,
Said a tired voice of the three
And straws were drawn for the lucky one,
Who would it be?

The night was long as the rain poured down.
There was little peace for the trampers underground.