An ‘easy’ weekend overnighter in Te Urewera turned into a battle of wits against a seemingly endless stream and a miserable night of camping.

After seven hours of splashing through a cold Te Urewera stream, Chris and Tami Green knew they wouldn’t be sleeping that night in a hut.

Exhausted, stumbling and cold, the Whakatane couple were long overdue and forced to admit defeat.

They had made good time walking from the car park to Koranga Forks Hut, but nearly doubled DOC’s conservative four-hour estimate for reaching Tawa Hut.

It wasn’t supposed to be a difficult tramp – just a simple training weekend for the couple’s planned Pacific Crest Trail thru-hike in 2020.

Spirits were high as they left the track near Koranga Forks Hut for the streambed.

“The route description said most of it is in the stream, and we were happy to practise our stream crossings. The water wasn’t high, but it was higher than usual,” Chris says.

Four hours and a dozen stream crossings later, however, they realised something wasn’t right.

“We looked at the GPS so see where the track should be, and we were standing on it, but there was no track at all,” Chris says.

As darkness descended, fatigue further weighed on their sodden boots.

“We were a lot more tired than we’d thought. We’d had a couple of falls, and we started to think we’re going to get in trouble here, we’re going to break an ankle,” Chris says.

“We made the right choice by stopping – if we had gone further, we would have walked into an issue.”

By this time the couple had been hiking up the stream for nearly seven hours, and some of the crossings had been “a little hairy”, coming up over their knees.

With rain forecast and daylight failing, they climbed to higher ground and set up camp.

That night, the ominous pitter-patter on the tent roof announced the arrival of rain – and the rising of the stream.

“We had a new single-wall tent. It weighs nothing, but the problem is you have to set it up perfectly for it to work.”

Unfortunately, they didn’t, and to make matters worse, Chris had left his tramping clothes hung outside in a tree.

They rose at six to more rain, a saturated tent and sodden clothes – “everything was soaked,” Chris says. 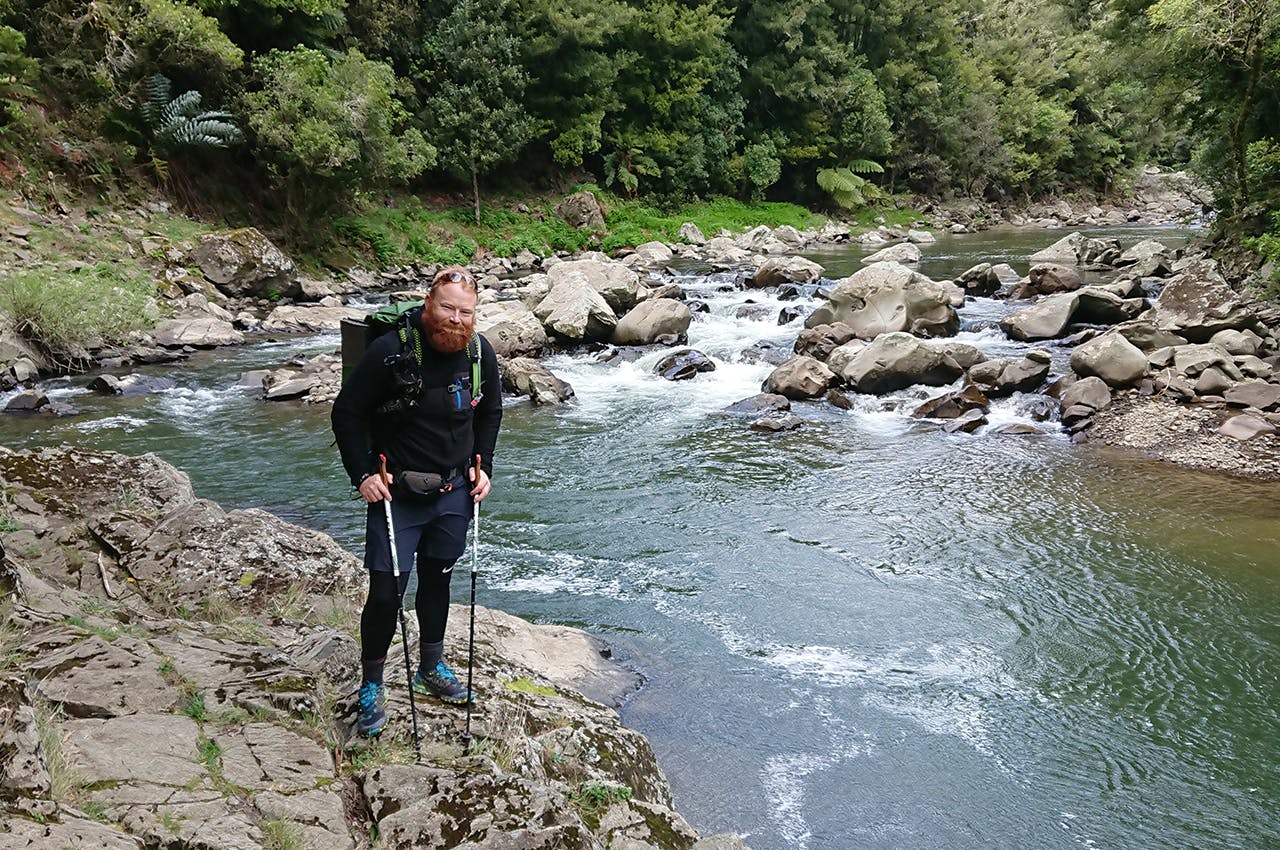 Getting onto the track early, they continued up the stream which was steadily becoming more gorge than stream.

Crossings were becoming treacherous, owing to the rain and narrowing stream, which was flowing so fast, it pushed stones off the streambed.

The third crossing of their morning had them inching their way across a six-metre wide section, moving half a footstep at a time. It took 10 minutes, and left the couple frazzled.

Desperate to leave the streambed for dry land, they scaled a 10m bluff and bashed their way into the thick bush.

“It was miserable, wet, damp, and the leaf litter was half a foot deep,” Chris says.

They continued through the bush in the assumed direction of the hut, but before long it proved easier to return to the stream, and hold on to the rocky bank.

Mentally prepared for another full day of slog, the Greens were elated to finally spot the beginning of the end.

“We saw a bright orange triangle, and I’ve never been so relieved in my life,” Chris says.

The marker confirmed they had been on the right track all along – only slowed significantly by the higher than usual stream level.

“We thought the track started significantly earlier – maybe two-thirds of the track earlier – but we miscalculated completely,” Chris says.

“What we thought would be maybe an hour of walking in the stream had turned into a day’s worth.”

Just 30 minutes later, the couple arrived at Tawa Hut for a bracing cup of tea with a wild-looking possum trapper.

“He laughed his head off – he had seen it all before,” Chris says.

The couple’s experience and preparedness prevented the situation from becoming overly dangerous, but it could have been worse.

Tami – an outdoor instructor – was experienced in stream crossings, and they had adequate equipment, a PLB and food.

“We were always going to be okay,” Chris says. “We were lucky we were self-contained – it was a wet, cold, miserable night in the Ureweras, but it could have been much more.

“We certainly felt alive at the end. It was a proper adventure with some risk, and at the end we were pumped.”