Access
Turn onto Koranga Valley Road from SH2, 87km from Opotiki. Follow this for 1km, then turn right into Moanui Valley Road. It is 20km to the car park. Note: The route between the two huts cannot be done in high flow conditions. Check with DOC Opotiki (07 315 1001) beforehand.

The Waioeka Scenic Reserve straddles a gorge between Te Urewera National Park to the west and the Raukumara Range to the north. It is steep terrain with large tracts of lowland forest dominated by rimu, rata and tawa. The reserve is home to several threatened plant species and a variety of unusual or endangered birds, such as the kaka, North Island brown kiwi, blue duck (whio) and New Zealand falcon (karearea).

Mustelids, goats, pigs and deer have done considerable damage, but there are still many beautiful spots and hidden gems.

A case in point is the triangle enclosed by the Koranga, Kahuiti and Kahunui Streams, the focus of a three-day round trip aptly called ‘cruising’ because of the amount of time spent in or beside water.

The name Koranga refers to the scaffolds or racks upon which fish were hung to dry. Generally high water clarity means this stream is still popular with trout fishermen. Kahu refers to the native harrier hawk when said with a long ‘a’ or a cloak when said a short ‘a’.

Our party opted to walk in a clockwise direction, thereby dispatching the worst climb on the first day. From the car park, the track skirts the Koranga River. After crossing it on a swingbridge, we ascended a gut-busting poled route towards the ridgeline.  Locals call this ‘The Burn’ because of its impact on the legs. About halfway up, the track divides where an interesting rock cleft is seen ahead. Swing right, however, and plod on until the highest point is reached at an open saddle, with glorious views to the north and east. Pause here, catch your breath, and enjoy the moment. Before you, podocarps are juxtaposed with paddocks, the legacy of a post- First World War rehabilitation programme for returned servicemen. Attempts to utilise such land met with limited success. Falling meat and wool prices and severe erosion following land clearance resulted in abandonment of many of these settlements, but pockets remain. 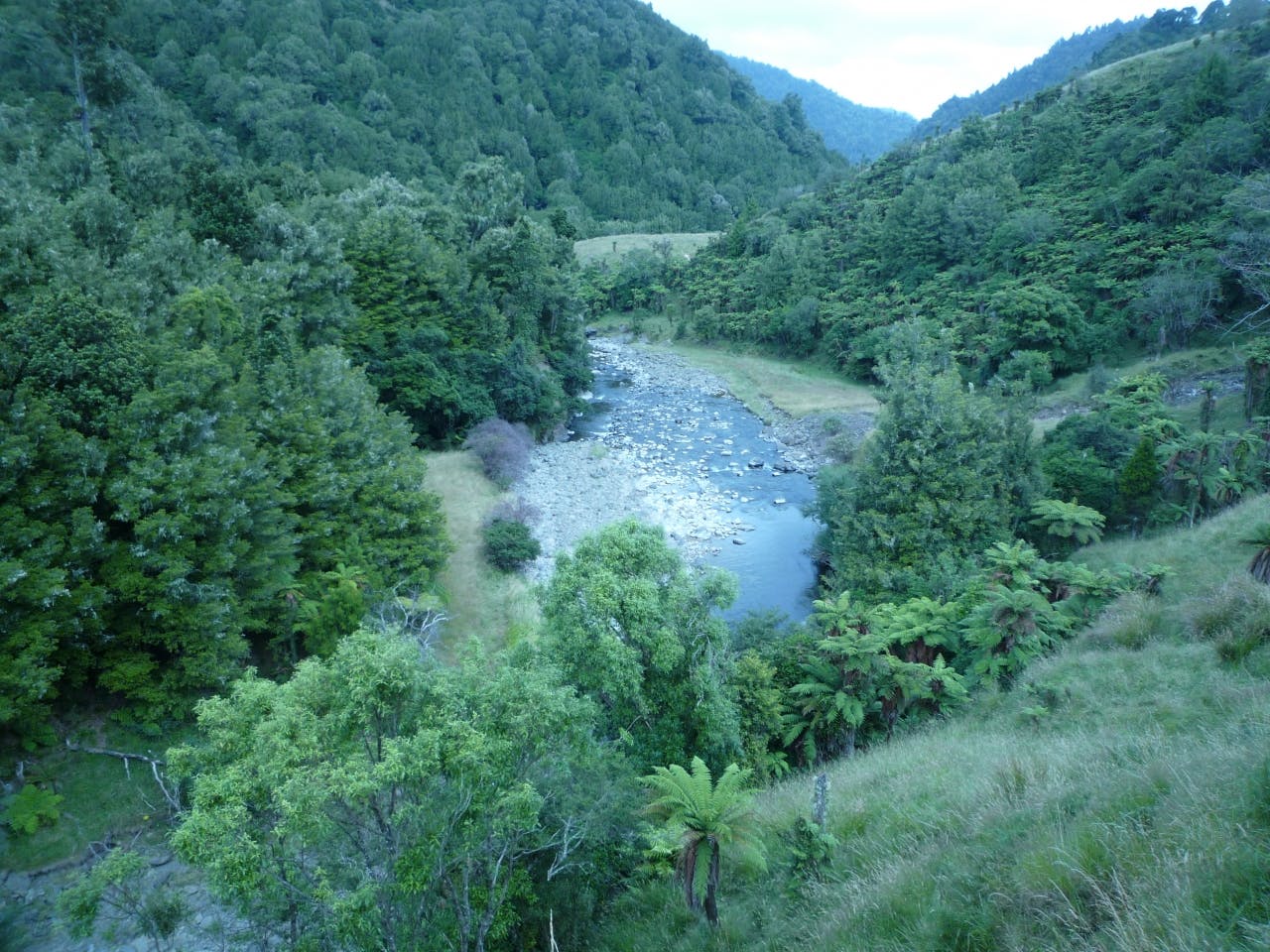 From the farmland, descend into the forest on a well-formed, benched track to the babbling Kahuiti Stream. It is likely that a friendly fantail will accompany you down. At times you must scramble to avoid washouts, or pick your way across uneven stony sections, but the trail is not hard to follow and the surroundings are pleasant to behold. About a kilometre downstream from where the Kahuiti merges with the Kahunui Stream, the track breaks out onto a large grassy clearing, the site of Tawa Hut. Hunters and fishermen often occupy the hut, but there is ample room for camping.

The second day is the most memorable. The trip between Tawa Hut and Koranga Falls Hut is down the Kahunui Stream bed and is a magical meander on a sunny day. About a kilometre down from Tawa Hut, the track terminates, propelling you down a rocky terrace into the gorge. Over the next few hours, high rock walls, massive boulders, pebble islands, perching logs, hissing waterfalls, cascading rapids and deep green pools are encountered in quick succession. However, progress is generally straightforward.

Crossing proves easy on gravelly sections just upstream of each difficult bit. Take your time, enjoy a dip, toss some rocks. There is no need to hurry and it is spectacular scenery. The closed valley eventually opens out at the junction of the Koranga River, where Koranga Forks Hut is situated beneath towering cliffs. It is a great place to ride the rapids, deck the driftwood, or watch the whio.

A moss-laden wire bridge across the Koranga introduces trampers to the final part of the walk. Once over the bridge, turn right and follow the track upstream. It is a picturesque walk on an excellent benched track, with some impressive vistas up and down the valley.

Forest gives way to farmland before the track plunges once more into the bush for the final few kilometres. Care is needed on several slippery rock slabs. Journey’s end is the car park from where the tramp began.

After the rather long and tedious drive back to the main highway, detour a short distance to the café or pub in Matawai to refresh yourself.  Small indulgences are always justified after periods of physical challenge in a remote wilderness!