Read more from the
July 2020 Issue

Read more from the
July 2020 Issue

The power of a river can be deceptive and lead to a frightening experience. By Petrina Darrah

After three days hiking the Gillespie Pass Circuit in Mt Aspiring National Park, my friend Kirstin and I felt confident and ready to tackle the final stretch of the track. From Siberia Hut, other trampers were taking flights or jet boats back to Makarora, but we opted to set off early and walk out through the Wilkin Valley.

Kirstin is athletic and tall. With her long legs she covers ground quickly. I took my time, stopping to spot rock wren and kakariki flitting through the trees. Before long, Kirstin had disappeared ahead of me.

I assumed she would wait for me where the track diverged. To the right was the Wilkin River and across it, Kerin Forks Hut. To the left, the track continued down the river to Makarora.

When I got there, Kirstin was nowhere to be seen.

The jet boat pick-up point was a further 20 minutes along. I thought she might have found her stride and carried on to that point. But when I arrived, there was no one in sight. By now, I hadn’t seen Kirstin for around two hours.

After pausing undecided for a while, I decided to carry on. It was a 40-minute round trip back to the turn-off, so I thought it made more sense to head to Makarora as fast as I could – hopefully finding Kirstin along the way, and if not, reaching help.

I would never have guessed that Kirstin was on the other side of the river.
She had reached the Kerin Forks junction ahead of me. While waiting, she turned right, walking down to look at the river. Two things happened then: she spotted the long drop next to Kerin Forks Hut, and an English couple arrived at the river and started to cross. Seeing them, she decided to cross the river and use the toilet before crossing back to find me.

She took off her boots to keep them dry and crossed behind the other two trampers. The river barely reached her knees, but the current was powerful. Halfway across, she slipped and was dragged downstream by the force of the water and weight of her backpack.

Scraped across the stones, she lost her boots and was submerged for around a minute. The two other hikers ran to help. The ice-cold water had drenched her clothes and pack. She was shaking with cold and shock, so they took her to the hut to warm up.

With wet clothes and no boots, Kirstin knew there was no way she could carry on, and she was too afraid to cross the river again alone.

Barefoot, she limped downstream to where she guessed the jet boat stopped. When it came roaring around the corner she managed to shout and wave until it stopped to help her.

As this was happening, I was racing down the river valley, plunging through mud and knee-high grass. For five hours I walked frantically, without stopping, and without seeing a single other person on the track.

When I finally marched back into Makarora, the jetboat driver waved me down and yelled out that he had given my friend a lift down the river.

Confused and still panicked, I beelined for the car park.

Kirstin was sitting by the car, alive and well aside from a few bruises, lost boots, and a ruined kindle.

After a tearful hug we promised that next time, we’ll stay within sight of each other. We’ll be sure to communicate exactly what we plan on doing. And we won’t be attempting more river crossings any time soon. 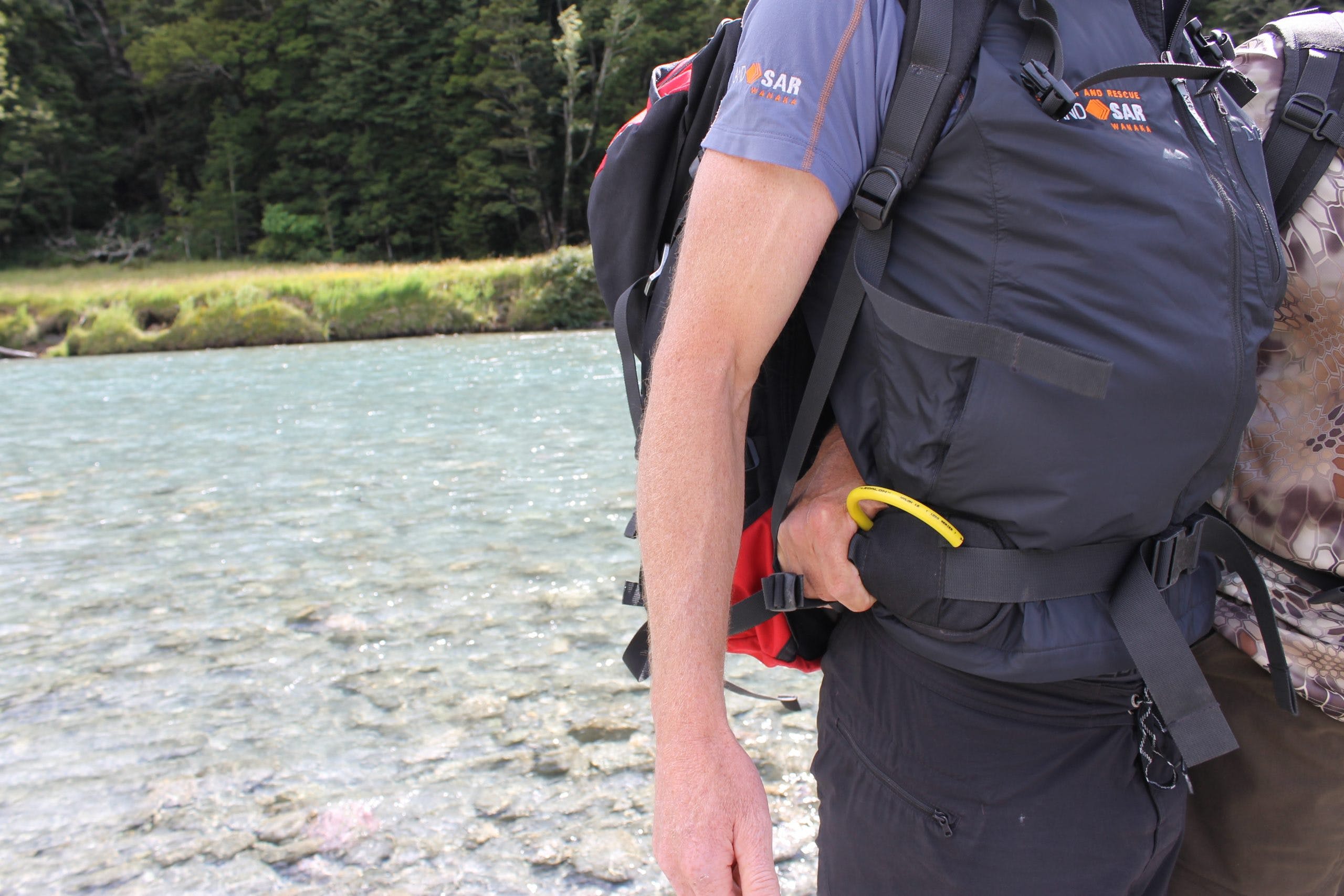 Pass your hand between your companion's back and pack and grip the waistbelt. Photo: Carrie Miller[/caption]

The group separated: Our nearest help in an emergency is our group. We can’t help each other if we’re not together. Stay within view of each other, stop at junctions and obstacles (especially rivers) and only move on when everyone is together.

Decision-making: A group arriving at a river should ask, ‘Do we need to cross?’. If in doubt, don’t cross – there are always alternatives. Before crossing, check the river’s depth and speed (throw in a twig to estimate the speed in the middle – it’s unsafe above walking pace). If it is safe to cross, look for good entry and exit points and consider if the riverbed is slippery or soft. Where will the river push you as you cross? Can you get back to this side safely if the crossing becomes dangerous?

Crossing the river: Leave boots on – it’s better to have wet boots than broken bones. While crossing solo is an option, there’s much greater safety in mutual support. Tuck in loose clothing, unclip chest straps and loosen shoulder straps. In pairs (or more), with the strongest person upstream, each person’s arm passes between their neighbour’s back and pack, firmly gripping the waistbelt on the other side. Keeping hips together, stay parallel to the current as you shuffle across.

Have you had a near miss and want to help others learn from it? Email editor@lifestylepublishing.co.nz