Inspired by the tales of other readers’ memorable nights published in the May issue, a hunter recalls his own near-miss during a storm in Aoraki / Mt Cook National Park. By Bevin Watt

he day provided an unexpected object lesson on the folly of venturing into such an area ill equipped to withstand the cold and wet conditions.’

This was how the Christchurch Press described the experience of four 21-year-olds who arrived at Ball Hut after crossing the Tasman Glacier in atrocious conditions. They were in an exhausted state, one suffering from hypothermia. Fortunately, a doctor who was at the hut was able to attend to them.

I was one of those four and, looking back, now realise the peril we’d been exposed to. Inexperienced? Yes. Ill equipped? We didn’t think so. We had good boots, warm clothes, two tents, plenty of food; we even had a small bottle of whisky. We didn’t have ropes, ice axes or crampons; we didn’t think we’d need them.

We had crossed the glacier in fine weather, climbed above the moraine wall and set up camp and anticipated hunting tahr the next day.

The storm struck during the night with winds of 200km/h, and a massive 225mm of rain fell in a few hours. We lay in our broken tents, the fabric against our faces as very cold water rose up our bodies.

At daylight we left our gear behind and set off for Ball Hut. The wind was dislodging boulders the size of small cars from the moraine wall and hurling them onto the glacier. Rivers of water surged on top of the ice, which was now shiny and treacherous. We linked arms to cross the deeper parts. 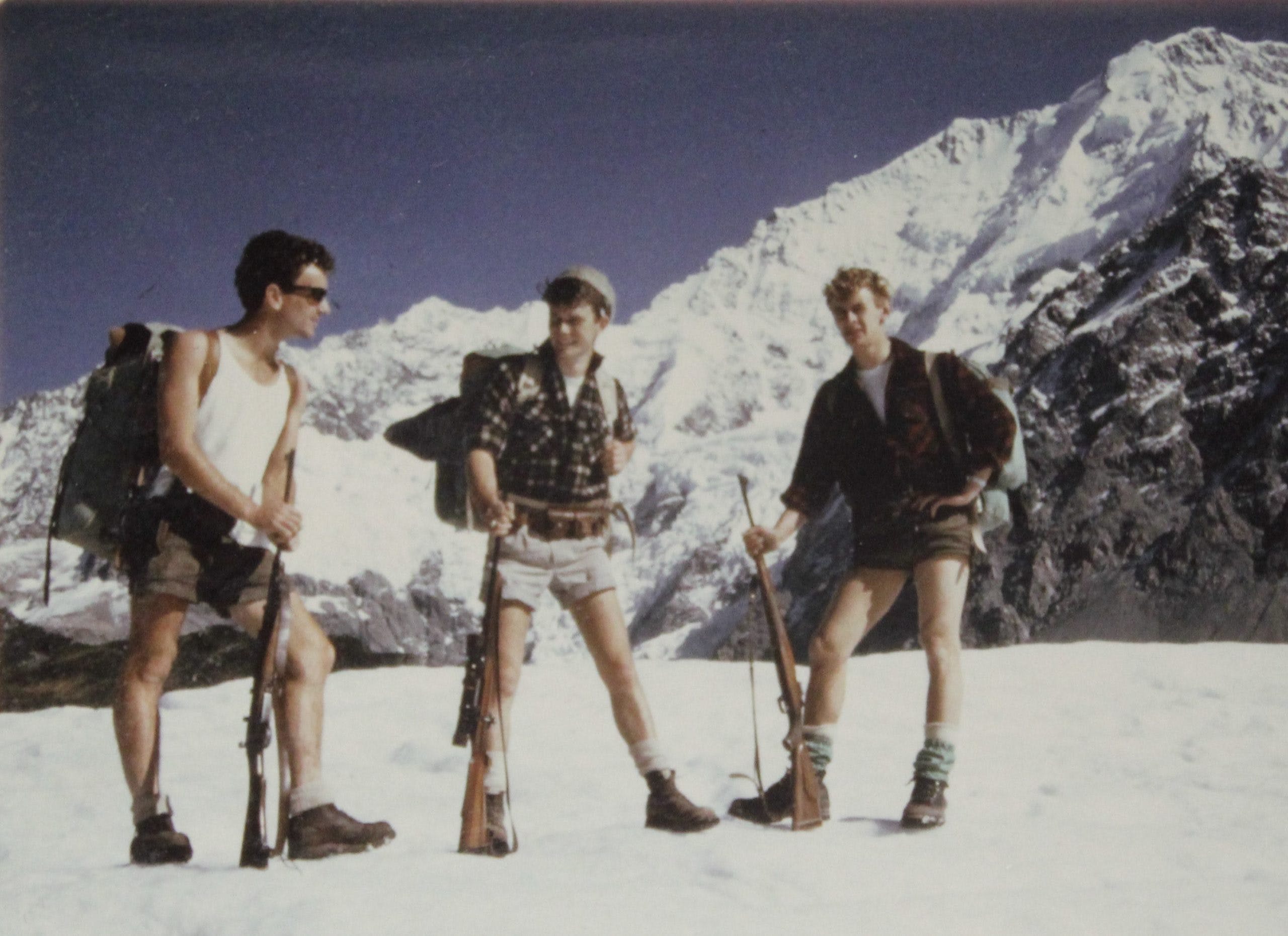 Bevin’s mates on the Tasman Glacier before the storm struck

I reached the hut first and banged on the door for help. Our mate who was suffering most from hypothermia was brought in by a stretcher party, who stripped him of his saturated clothing and placed him in front of a pot belly stove. We later discovered he’d swigged on the whisky in the mistaken belief that alcohol would keep him warm.

We learned some things the hard way, like the need to check the weather forecast. The sun was shining when we set off, but there were warning signs if we’d known what to look for. Ominous clouds were rolling over the Main Divide.

Flimsy tents have limitations. Ours proved effective in two ways – they let water in and didn’t let water out.

Crampons, suitable footwear to attach them to, ice axes and ropes would have made our predicament much less severe.

And lastly, when tramping in a storm do not consume alcohol. It may stimulate circulation, but in doing so it opens arterioles and hastens heat loss.