New Zealand’s second oldest national park is dominated by the perfect cone of Mt Taranaki, but there’s a lot more to this park than its namesake mountain

In the 1830s, when naval surgeon William Barrett Marshall first saw Mt Egmont/Taranaki ‘snow-capped and veiled in mist’ he was moved to write: ‘A more striking or magnificent object in creation than this mountain I have never beheld’. The stately, proud mountain, seemed to hold ‘mysterious converse with a congregation of clouds’.

Nowhere else in New Zealand does one mountain dominate and define an area as much as Mt Egmont/Taranaki (2518m). A singular peak that rises on the Taranaki Bight in almost perfect symmetry, (at least from some angles) it’s known by locals as ‘the mountain’. Indeed, to say many local mountaineers love Mt Taranaki is to seriously understate their passion; they are often obsessed with it. An elite few have climbed it more than 1000 times.

Egmont National Park is New Zealand’s second oldest. As early as 1881, the forests on its lower slopes were set aside as a reserve, after concerns about the fast-disappearing native forests of Taranaki, which were then rapidly falling to axe and fire. Even those who were forming farms from the ashes knew the importance of ensuring the headwaters of the streams and rivers they relied upon remained forested. National park status came in 1900. Any park map will show the curiously circular park boundary that was decided upon simply by scribing a circle around the summit with a ten-kilometre radius. It’s not a perfect circle in the north-west, where the park boundary includes the Pouakai and Kaitake Ranges.

For Maori, the mountain is a sacred ancestor, a giver of life, and a landmark that symbolises the region and its identity. Its upper slopes were tapu (sacred), a concept that early Europeans did not always understand or respect. Despite an enlightened attitude towards New Zealand’s original people, German explorer and scientist Ernst Dieffenbach was determined to ignore the tapu and climb the mountain when he was in Taranaki during the voyage of the Tory. After one failed attempt, he and companion James Herberley scaled the mountain in 1839, and boiled a billy on the summit to estimate the mountain’s height. Dieffenbach’s climb has been considered as the first mountaineering ascent by a European in New Zealand. Since then, many of New Zealand’s most famous mountaineers have scaled it, included Dan Bryant, John Pascoe and Ed Hillary.

After the establishment of New Plymouth, more people were drawn to the mountain to explore its forests, see its waterfalls and climb its summit. An early route to the mountain climbed the Mangorei Track, over the Pouakai Range, down to Ahukawakawa Swamp and up the northern slopes from the site now occupied by Holly Hut. It was an arduous expedition, required good fitness and a number of days. Bridle tracks were later built up the mountain to near the bushline, and accommodation established. Today, the park is an important recreation ground for climbers and trampers.

If you had a week to enjoy the park, what would you do? Where could you gain an essence of the park, and some idea of its diversity? Here are some ideas.

Get the best view of the mountain

The most outstanding vista of Mt Taranaki is from the Pouakai Range, which also offers one of the park’s best tramping circuits. Beginning and ending from North Egmont, this two- to three-day track goes first to Holly Hut, then onto the Pouakai Range, before making its way through forest back to the start.

The Pouakai Range is the remnant base of a volcano that was once the size and height of Mt Taranaki, and is part of a series of older volcanoes that also included what is now the Kaitake Range, Paritutu and Sugar Loaf Islands.

Pouakai Hut is situated just below the crest of the range, near a fine viewpoint where Mt Taranaki rises symmetrically above the Ahukawakawa Swamp. Twenty minutes east is a series of small tarns in which the mountain is sometimes reflected to perfection. Also worthwhile is the side trip to the summit of Pouakai, the range’s highest summit at 1400m. 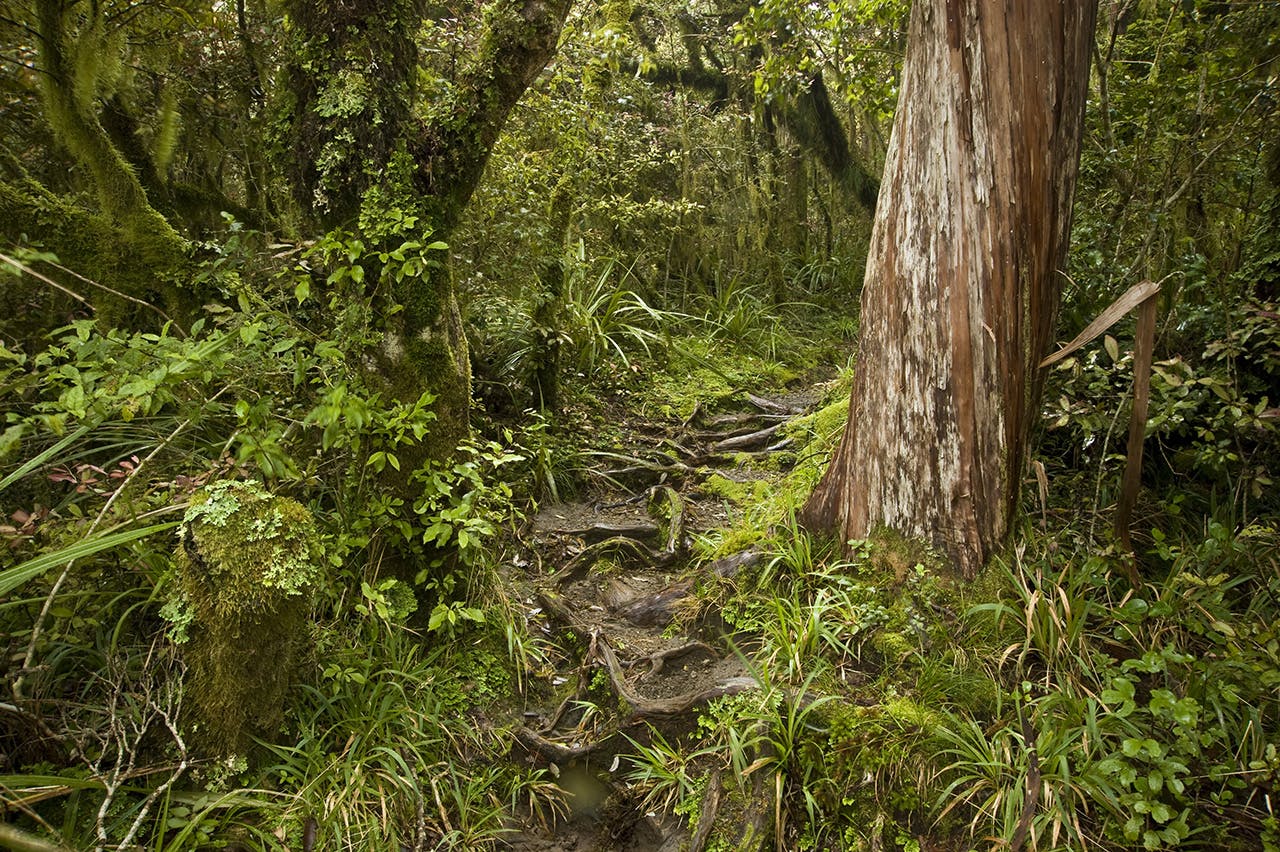 Due to past volcanic activity, Egmont National Park has no beech forest. Beech is a notoriously slow coloniser, and so far has been unable to reestablish itself in the area. Instead, it is the hardwood podocarp forest that dominates, with kamahi, Halls totara and pahautea as the significant species. At certain altitudes, where the forest begins to become a bit stunted, and the rainfall is so high that moss and lichens thrive, you encounter what locals have long called ‘goblin forest’.

Not surprisingly for such a steep-sided mountain, Taranaki boasts several waterfalls. One of the most accessible is the 18m Dawson Falls. Others include Bells Falls, which plummet down the side of the Dome, and can be reached from the Pouakai Circuit, Round-the-Mountain Track, or Stony River route. Wilkies Pools are marvellously scalloped cascades accessible on a short walk from the Dawson Falls car park.

Other waterfalls in the park on the Round-the-Mountain Track include Brames Falls and Curtis Falls.

Stay in an historic accommodation 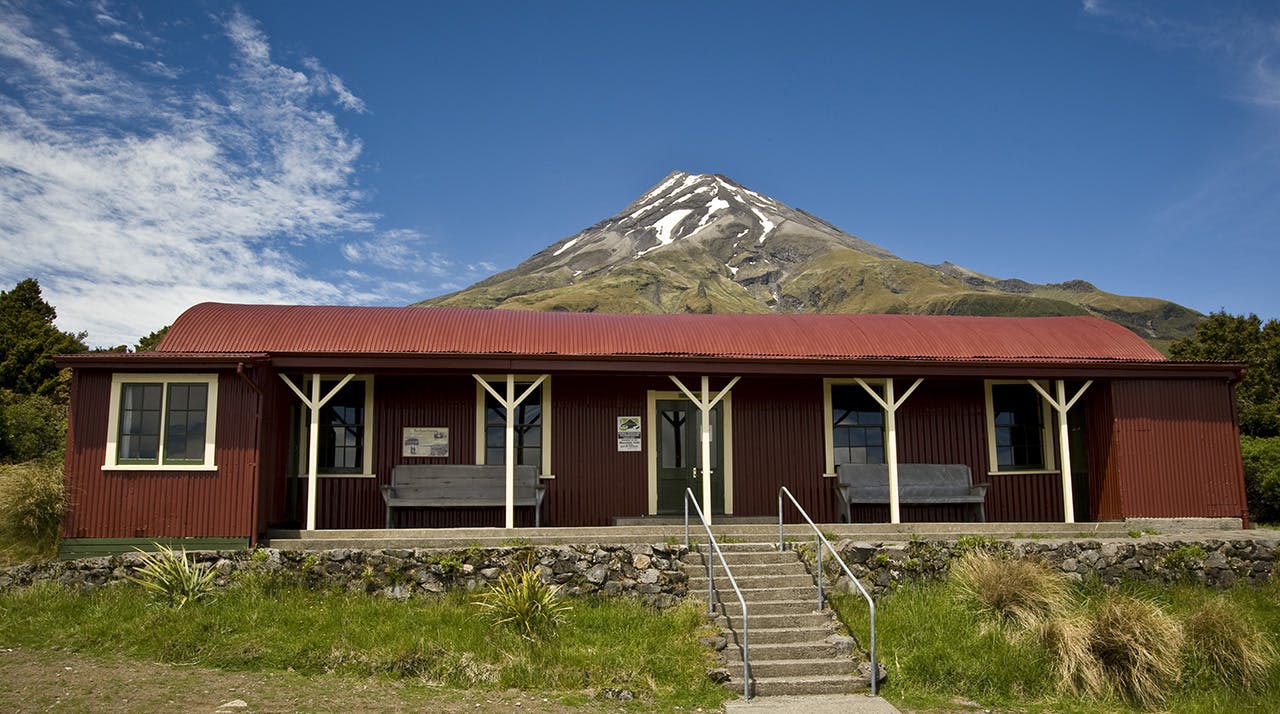 The Camphouse is the oldest building in any of New Zealand’s national parks. Photo: Shaun Barnett/Black Robin Photography

Egmont National Park is home to the oldest building in any of the country’s parks: The Camphouse. This former military barracks was originally erected in New Plymouth, but dismantled and shifted to its present site in 1891. Ever since, it has served as accommodation for generations of visitors.

Today, The Camphouse is available for hire through the DOC website (17 bunks, showers, flush toilets, heating and cooking facilities). The Dawson Falls Lodge and Stratford Mountain House also have a long pedigree, and both offer more luxurious accommodation.

Stand in a crater

Many people who visit the national park want to scale the mountain, and the fastest access route is from North Egmont. While within the abilities of most suitably-prepared trampers in summer months, the ascent is a serious undertaking in winter or in adverse conditions. Even experienced mountaineers have perished on its slopes. But the well-equipped and experienced will enjoy the superb views on the climb, the striking profile of the Sharks Tooth, and the intriguing crater below the summit. 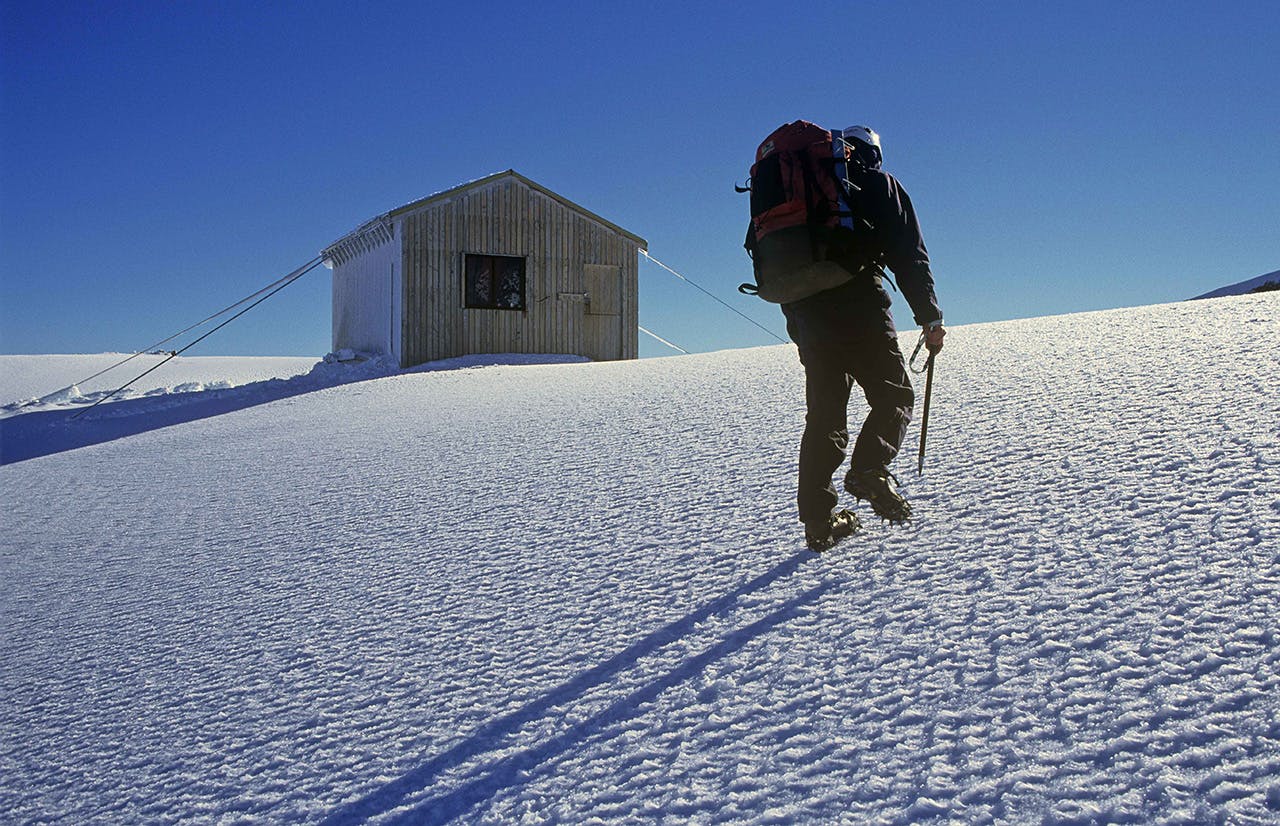 To reach the hut, begin from Dawson Falls and take the Fanthams Peak Track. Above the bushline, this becomes a series of wooden steps, and then a steep scree climb. During winter, an ice axe and crampons are essential.

On a good day, the sunrise and sunset from the hut are stupendous, with a great sense of being high above the Tasman Sea. Winter coats the hut in rime ice, sometimes in fantastical formations, and the mountain’s shadow stretches out in a great dark pyramid beyond.

Learn about the park

Egmont National Park boasts two visitor centres. The North Egmont Visitor Centre has a café, small shop and good displays about the park’s geology, natural history and its human connections. The Dawson Falls Visitor Centre is smaller, but anyone interested in the park’s history will enjoy visiting the original Syme Hut. Built in 1930 by the Mt Egmont Alpine Club, this hut served for over 50 years before being dismantled in 1987 and reassembled as an historic display in the visitor centre. 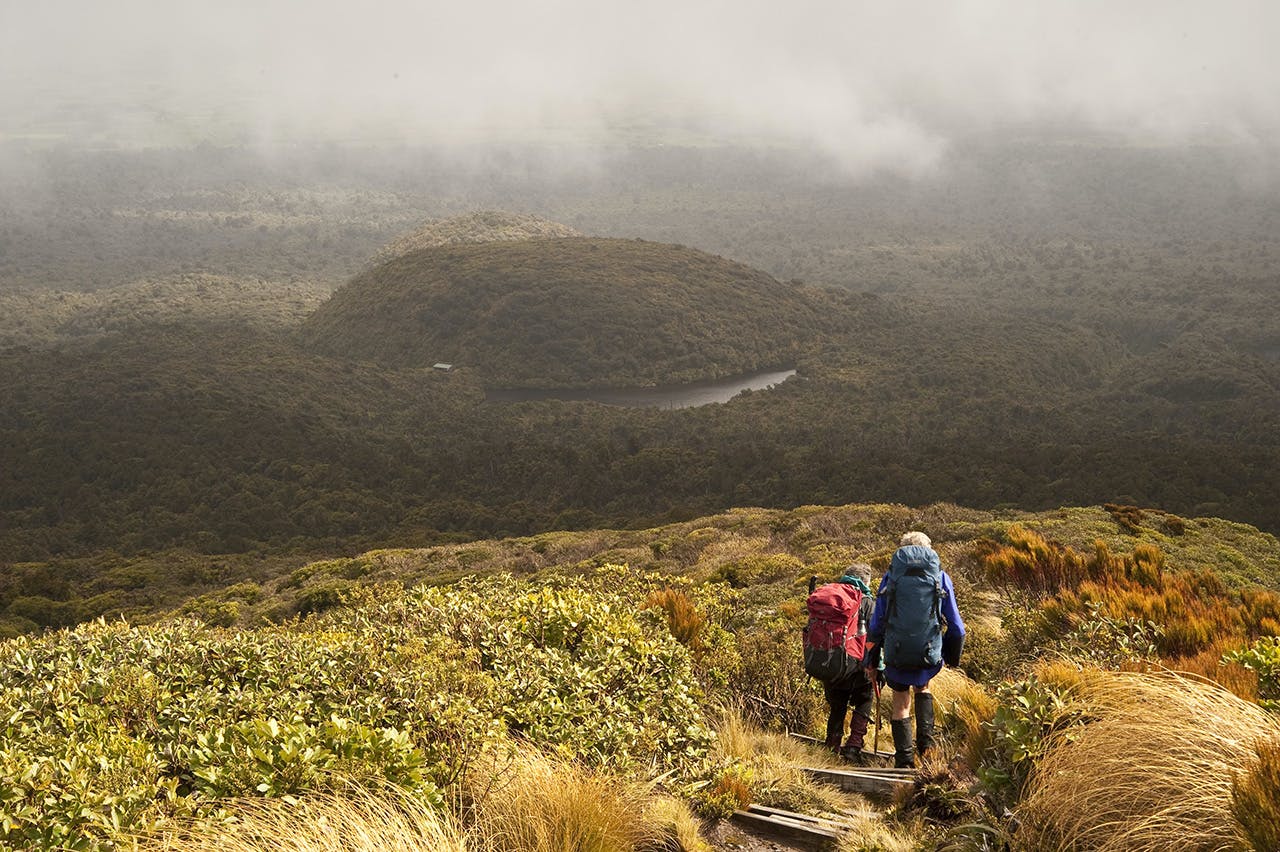 Egmont National Park is not known for its lakes, with Lake Dive being the only significant one. But it’s well worth visiting on a two-day tramp that begins and ends at Dawson Falls. A good round-trip is possible by using the Upper Track to Lake Dive, and the Lower Track on your return.

Lake Dive sits in a depression in front of curious features known as The Beehives. The nearby hut is a comfortable 16-bunk hut, typical of those in the park.