Ditte and I were faced with an immaculate winter weather forecast, with another huge high locked over the country. This normally delivers severe frosts at altitude, followed by crisp clear windless days of remarkable warmth between the hours of 10am and 3pm. It seemed like a great chance for us to revisit an old wallowing hole, the Hope River hot pools, a mere two hours drive from Christchurch, followed by a four to five hour ride, depending on the surface conditions.

Unexpectedly, on the drive into Lake Taylor we encountered sleet falling from the grey ceiling of cloud that had congregated above. It collided with our windscreen, where it got sloshed around by the wiper blades. Black thoughts of riding the high country in winter rain invaded the car, so the heater was judiciously turned up. We had come too far to turn back and as light snow fell at the east end of Lake Taylor, our ride beckoned.

This was the old NZFS No 1 hut site converted by DOC to a great camping spot. The 4WD track we rode headed west around the lake edge and was getting slowly covered in a blanket of snow. Behind us, our tracks soon disappeared. The great thing about riding in snow, as opposed to rain, is how it falls softly, as if in slow motion.

Many of the small side streams we encountered had frozen over during the preceding weeks of hard frosts, the snow adding grip and camouflaging the slippery ice below. From the north end of the lake we climbed gradually to Loch Katrine, its edge dotted with Kiwi baches of all shapes and sizes. We rode around the Loch edge before climbing onto a high terrace to the first hazy glimpses of Lake Sumner. A long 4WD track descent took us to the lake’s western end and from there we followed Taylor Stream to the water’s edge.

We biked along the lake edge shingle from Home Bay and launched into the glassy Upper Hurunui River where it slides, wide and shallow into Lake Sumner. Each submerged pedal stroke splashed bare calves and shins with icy exuberance. We both performed the ancient dance of frozen feet on the far bank, more to alleviate the ice cream headache than to warm the pins. We walked a bit until blood flow and some state of normality returned to the toes.

By now, steady snow had transformed the landscape to a purely black and white image; our bright orange jackets a Spielberg intrusion. A carpet of blotting paper absorbed all sound. With the sheer fun of making the first tracks through the snow to the start of the old Kiwi Pack Track, our cold feet were soon forgotten. After crossing the swingbridge at Three Mile Stream, a challenging section of single track wound us up to Observation Point where Lake Sumner was barely visible through the falling snow. We continued down to the Kiwi River and sidled along below Niggerhead Peak to the Hope Kiwi Lodge. It was empty, cold and iced in snow.

The falling snow had a more serious glint to its crystals as we headed up the left branch of the Hope River. Gary Larson’s wild cattle paused momentarily from their snowball throwing and snow cow making, amused to watch us pedal by, warm in their 800kg bodies. But as I pointed out to them, we weren’t eventually heading for the freezing works. 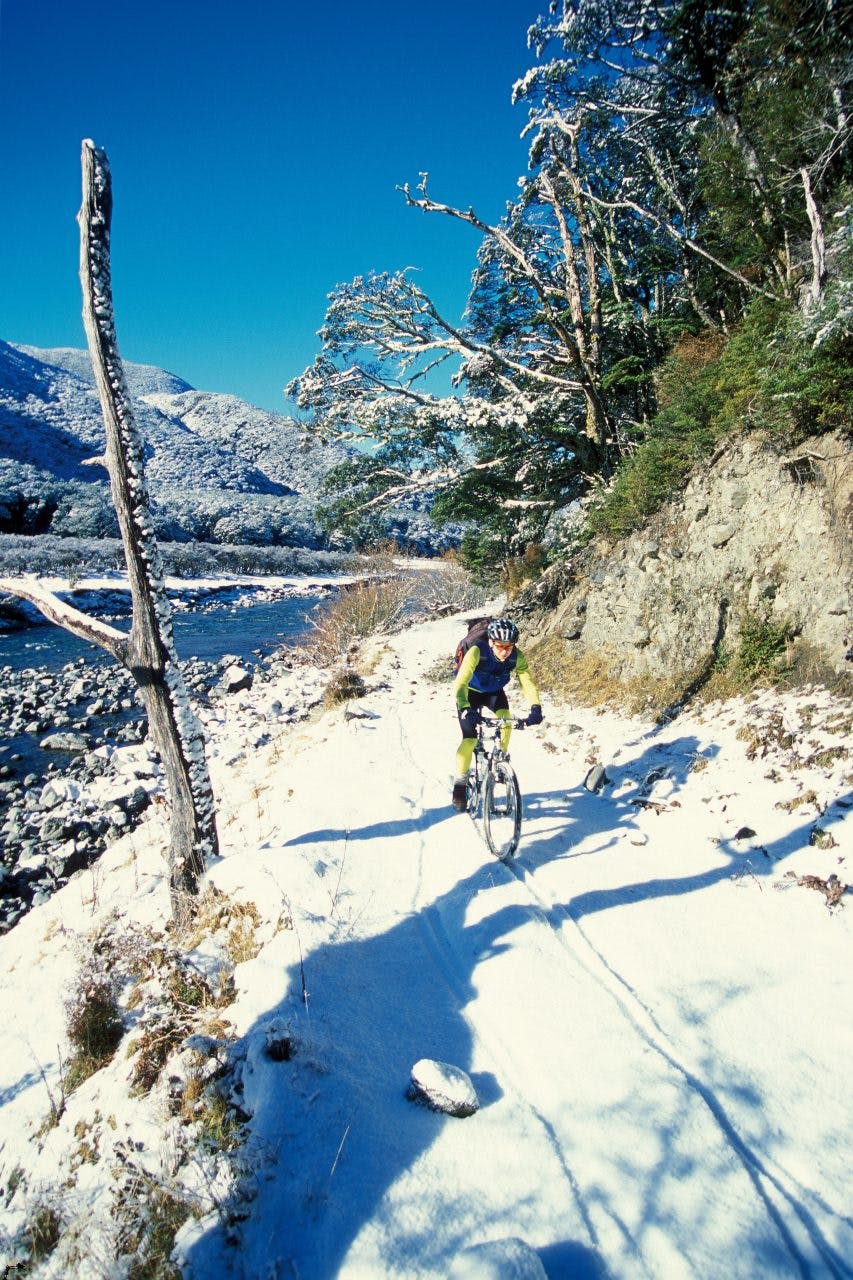 We stopped for lunch at Jacobs Hut, where snow was building up on the roof and threatening to avalanche upon us if we loitered too long. We had piled on every bit of extra clothing to combat the increasing onslaught of heavy snow. Back on track, we navigated another two frosty river crossings to reach Top Hope Hut and our shelter for the night. The Hut was well stocked with dry firewood, its potbelly stove raring to go. The hot pools beckoned from further up the valley, so we quickly unpacked our kit, leaving no chance to get cold or be tempted by the luxuries the hut contained.

We rode the final couple of kilometres to the pools, drawn there by their sulphurous scent. They looked resplendent amongst the beech forest and after moving some rocks around and with a bit of Roman engineering, we soon had the perfect temperature dialled in. After the initial pain of feet thawing, bliss amongst falling snow was indulged in; a fitting reminder of life’s simple pleasures.

With the light fading, we floated back to the hut and soon had a roaring fire going and tea on the way. As night descended upon us, the stars came out to play and the promise of a clear day invaded our dreams.

We awoke to blue sky, the sun slowly moving down from the golden tops and through the snow-coated beech trees to the river flats, the terrace tussocks and eventually to the hut. We moved the snow-encrusted bikes out into the sun to thaw.

After breakfasting in the sun, we managed to bolder hop back over the river without getting our feet wet; a worthwhile exercise considering the trouble we had gone to to dry our boots the night before. It was a glorious day riding through a magical landscape of snow and ice with the warmth of the sun on the backs of our legs.

The local cattle had compacted the snow on the track, speeding our return – one of the few occasions when their hoof prints on soft ground were welcome. We climbed the short rise that bypasses the small upper Hope River gorge, amazed at the grip we got on such a steep snow-covered surface where shaded spots remained icy.

We soon left the upper valley and headed past Hope Kiwi Lodge taking the high ground back to Kiwi Saddle. Melting snow was sending a steady stream of glinting ice crystals through the forest’s upper canopy, creating a wave of mini rainbows on their way down. We crossed over the Hurunui River at lake edge and made the most of the sunny day splashing through the small stream crossings on the last leg back to the car. Much of the snow was now gone and in the shady spots only slush remained.

A fabulous and unforgettable trip; sometimes you just have to take a chance and ride.