More contagious than any bird-borne virus, moa fever is surprisingly easy to contract in the New Zealand backcountry.

Earlier this year, a team of Department of Conservation workers was digging near Routeburn Falls Hut when the backhoe turned up something unusual about a metre beneath the surface: bones.

They were far too big to be from any native bird species, and felt too light to be deer bones; could they possibly be from a moa? They only found the femurs and a bit of pelvis, so they could be the discarded supplies of an ancient Maori greenstone hunting party? Or perhaps a partial carcass carried off by a Haast Eagle? 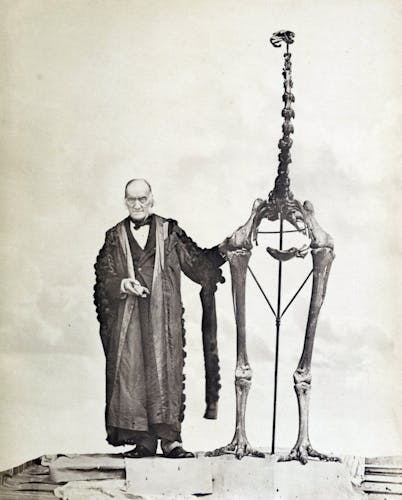 Richard Struthers, who was involved with the find, said what happened next was best described as a mild case of “moa fever”.

Among the team, imaginations raced, emails were sent to experts to try and pinpoint exactly which species they’d turned up, amateur archaeological expeditions were planned to see what other amazing relics might be lurking about.

It’s tempting to brush off the whole affair as just a consequence of watching too many Indiana Jones films, but in truth the team’s excitement was well founded; if you’re looking for moa bones, this is one of the country’s better spots.

The Routeburn Track is only a stone’s throw from where takahe were found alive and kicking, 50 years after being listed as extinct. And Quinn Berentson, in his book Moa: The Life and Death of New Zealand’s Legendary Bird, described Central Otago as ‘most likely the place where they made their final stand against humanity’.

It’s no surprise then that this isn’t the first case of moa fever the area has seen. In 2001, a complete upland moa skeleton, with an un-hatched egg, was found under a rock overhang at the nearby head of the Dart Valley, triggering an extensive search by Otago University which turned up still more remains.

But that’s not the original case of moa fever. The big daddy of all moa rushes happened in parallel to the Central Otago gold rushes of the 1860s and one could argue is of comparable historical significance to its metallurgical sibling.

Sir Charles Darwin had just published The Origin of the Species and Sir Richard Owen (famous for coining the term ‘Dinosaur’ in the 1840s) was busy looking at more recently snuffed species like the moa.

Those were the days when we were collectively realising that the animals around us were not the only ones that have ever existed and it was shaking our world view in a way that hadn’t happened since Copernicus pointed out we weren’t the centre of the universe.

As the miners dug and sluiced and panned the Central Otago landscape, more and moa bones and mummified remains were being found and spirited off to academics and collectors around the world. It’s this first case of moa fever that taught us much of what we now know about these amazing birds.

Sadly not all of them made their way into museum collections. Many were left where they lay by the otherwise occupied miners – some were even burned in lieu of firewood in the brutal southern winters. But enough found their way into the right hands to build the foundations of what we know about these amazing birds – and an equally amazing insight into the Archaic Maori who hunted them.

That does, however, beg the slightly petulant question: so what?

In The History of New Zealand, the late Michael King pointed out, somewhat euphemistically, that the ‘experience of and the penalties of pursuing larger game to extinction would have led to the development of more sustainable practices in the hunting of remaining birds’. In other words, the classic Maori concept of ‘kaitiakitanga’ (guardianship and conservation) was a lesson learned the hard way.

George Santayana once famously quipped: ‘Those who cannot remember the past are condemned to repeat it.’ I think that’s the real significance of the moa. The Archaic Maori killed off the moa through unsustainable hunting practices, but survived in post-moa Aotearoa because they didn’t have all their eggs in one basket.

Looking around modern New Zealand, it’s pretty easy to see modern day ‘moa hunting’ going on. As a society, we’re heavily reliant on oil, while individually our wealth is generally tied up in a single house (which the Americans demonstrated isn’t as ‘safe as houses’ as we’d thought) and if you’re involved with the dairy economy then chances are you’re lashed to the mast of the good ship Fonterra.

When the 2008 Chinese Milk Contamination Scandal broke (or the more recent Botulism scare) and China started talking about stopping buying our exports – I wonder how many moa historians thought: “Here we go again!”