Seventeenth century French philosopher Rene Descartes famously mused ‘Je pense, donc je suis’ (I think, therefore I am). In his mind, the very fact he was asking abstract questions was proof that he existed. But could he have missed a step?

Cast your mind through the animal kingdom for a moment and ask yourself: ‘What is it that separates mankind from every other organism on the planet?’

There’s a host of traits that define Homo sapiens as a species, but I’m sure you’ll agree the two really big ones are that we walk upright and we think abstractly. Sure, gibbons might stand upright every now and then and humpback whales might be busily contemplating their navels out in the briny, but we’re the only species that do both well. We habitually walk and run and use our brains to send our colleagues into space.

Interestingly, there’s a growing school of thought that argues those two uniquely human traits could be more closely related than most people think. South African human evolution expert Louis Liebenberg thinks our brains and our upright posture co-evolved as two parts of the same hunting system.

Liebenberg’s hypothesis is that tracking – basically walking and thinking – is where it all began in terms of our higher level reasoning abilities. His logic is that tracking inevitably requires a hunter to work with incomplete information; hoof prints that disappear into the swamp, trampled grass mixed with featureless rock, a glimpse of a quarry before it flees into a labyrinth of trees. He says to make sense of it hunters must learn to “read between the lines”.

According to Liebenberg, “To interpret tracks and signs trackers must project themselves into the position of the animal in order to create a hypothetical explanation of what the animal was doing.”

Liebenberg believes this hunters’ hypothesising is the very foundation of science and that when early Homo sapiens tracked animals they were inadvertently going through the same question, hypothesis, experiment, prediction and analysis cycle that Galileo and Newton followed a few thousand generations later.

What’s more, if Liebenberg’s ideas are true, then the nerds of the prehistoric world, rather than being subject to wedgies and ridicule as they are today, would have been the rock stars of the early Stone Age. When tracking was a survival skill, the better you thought, the better you ate and the better you could lure the ladies and look after your kids. All of which put an evolutionary pressure on our ancestors, which eventually, for better or worse, installed us as the brainiest monkeys on the planet.

The irony is: testing Liebenberg’s hypothesis in a scientific fashion is all but impossible. With no early Stone Age folk to chat to, we’ll never know for certain if our ancestors actually hunted, or whether they just scavenged carcasses felled by better equipped predators. 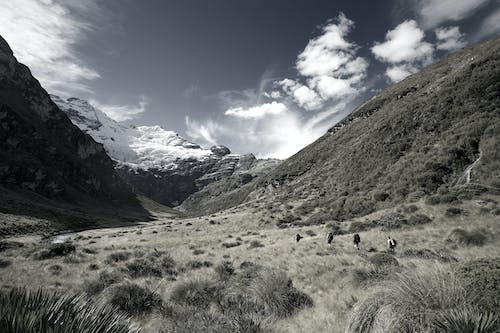 The Earnslaw Burn; a lovely spot to prove your existence.

But for what it’s worth, the relationship between bipedalism and higher intellect certainly seems to ring true for me. When I’m stuck for something intelligent to say (which is even more often than you’d think) I simply pack a notepad and pencil and head out on the trail. It usually takes a kilometre or two for the ideas to flow; or if they’re being particularly recalcitrant I can usually shake them loose with a vigorous 5km run, but inevitably the very act of putting one foot in front of the other seems to get my synapses crackling.

And I’m not alone. Chatting with other members of the local creative community, the notion of taking your problems for a walk seems to be an almost universal solution. Among my relatively small circle of friends I can count three writers, two musicians a few photographers and one graphic designer who all solve problems ‘on the run’ so to speak.

Now here’s where it gets a bit deep and meaningful. If you take Liebenberg’s idea that we started to walk in order to find food, and we began to think to figure out which way to walk, and you stand it on Descartes’ shoulders then you end up with: I walk, therefore I think, and therefore I am.

So next time someone asks you that tired old question: Why do you do it? Why do you spend your weekends traipsing around the hills when there’s plenty of entertainment at home? You can give them the simple and honest answer: it’s the proof of, and reason for, your very existence.