Wearable imaging promises to be the next big thing in photography, but is the outdoors ready for it?

In my experience the best things in life are given, not taken. That goes for everything from authority and possessions, to love… and photographs.

All of my favourite images are from guys like Henri Cartier-Bresson, who had the knack for passively picking decisive moments from the events unfolding around him. It seems the phrase: “stand over there and act natural” was not in his vocabulary.

But photography by its very nature tends to be active, predatory even. Just look at the words we use to describe the art: we shoot subjects, capture scenes… and when we go on a holiday for the purpose of photography it’s aptly described as a photo-safari.

However, I get the feeling all that is about to change.

Over the last few decades photographic technology has moved drastically towards more automated methods. Auto-focus and auto-exposure have been around for years, but more recent cameras are able to automatically recognise faces and even spot when subjects are smiling.

Photo software can now select – or even generate – aesthetically pleasing images based on a set of algorithms factoring in colour combinations, overall proportions and positioning of subjects within a frame.

And all the while cameras have been becoming smaller, lighter, better and cheaper to the point where companies have started building wearable cameras, specifically for outdoor sports.

It doesn’t take Nostradamus to see where this is all heading: fully automated, wearable imaging. 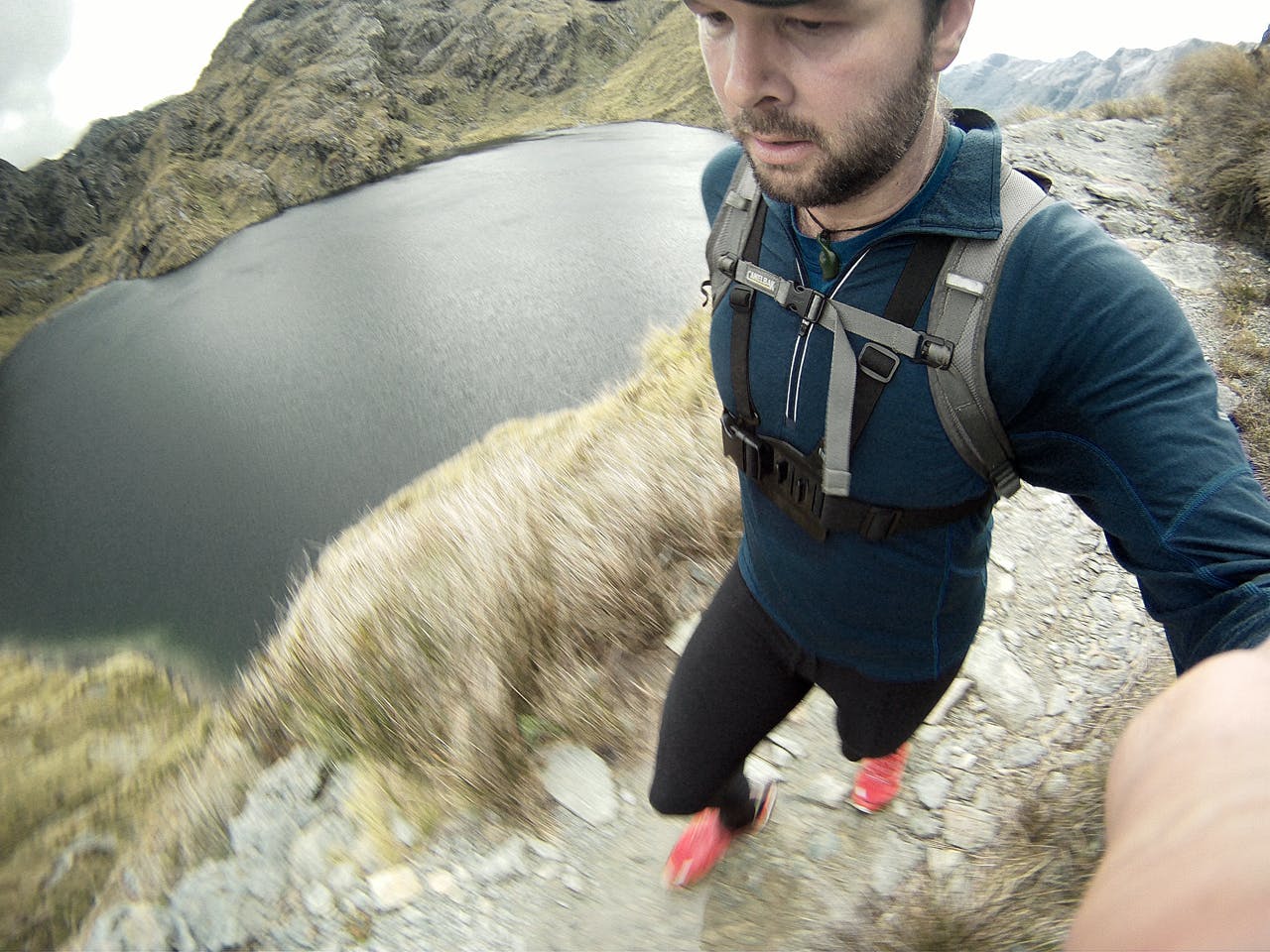 It would only take a few, relatively small technological leaps (in fact we’d only need to refine existing technologies) to produce a camera small enough to clip onto a backpack strap, allowing trampers to simply photograph everything on a trip. In essence it’d be like a wearable version of Google’s Street View.

When the passive photographer gets home all they’ll need to do is download the photos into a computer and run a scan to select which of the thousands of images are keepers based on a set of user defined criteria: would you like your photos to look arty, scary, happy, romantic, scandalous or would you like me to choose, Dave?

It sounds a bit far fetched, but I recently had a glimpse into what it’ll be like while running the Routeburn Track.

Trail running with an SLR was obviously out of the question, and my experience with point and shoot cameras in these situations is that they tend to stay in the backpack. So I decided to try something a little different – a wearable camera set to take a picture every two seconds.

Over the three hours or so that it recorded before running out of batteries it took something like five thousand images. In a few cases I passed it to a friend or pointed it in a particular direction, but basically everything was automated. I never looked through a viewfinder, never chose a shutter speed or focal length and didn’t see any of the results until I returned home.

It was certainly interesting, but it’s hard to say whether it’ll improve or impoverish the outdoor experience.

On one level it was fantastic to just enjoy the outdoors without worrying about missing a shot. Plus the hands-free aspect allowed me to receive quite a few images that would have been impractical or impossible with a traditional camera.

However, meeting people on the trail while wearing a camera strapped to your sternum was in truth a little awkward – the usual trail banter is almost impossible when everyone’s eyes inevitably wander down to the point of interest at your chest. I now understand what my girlfriends complain about. 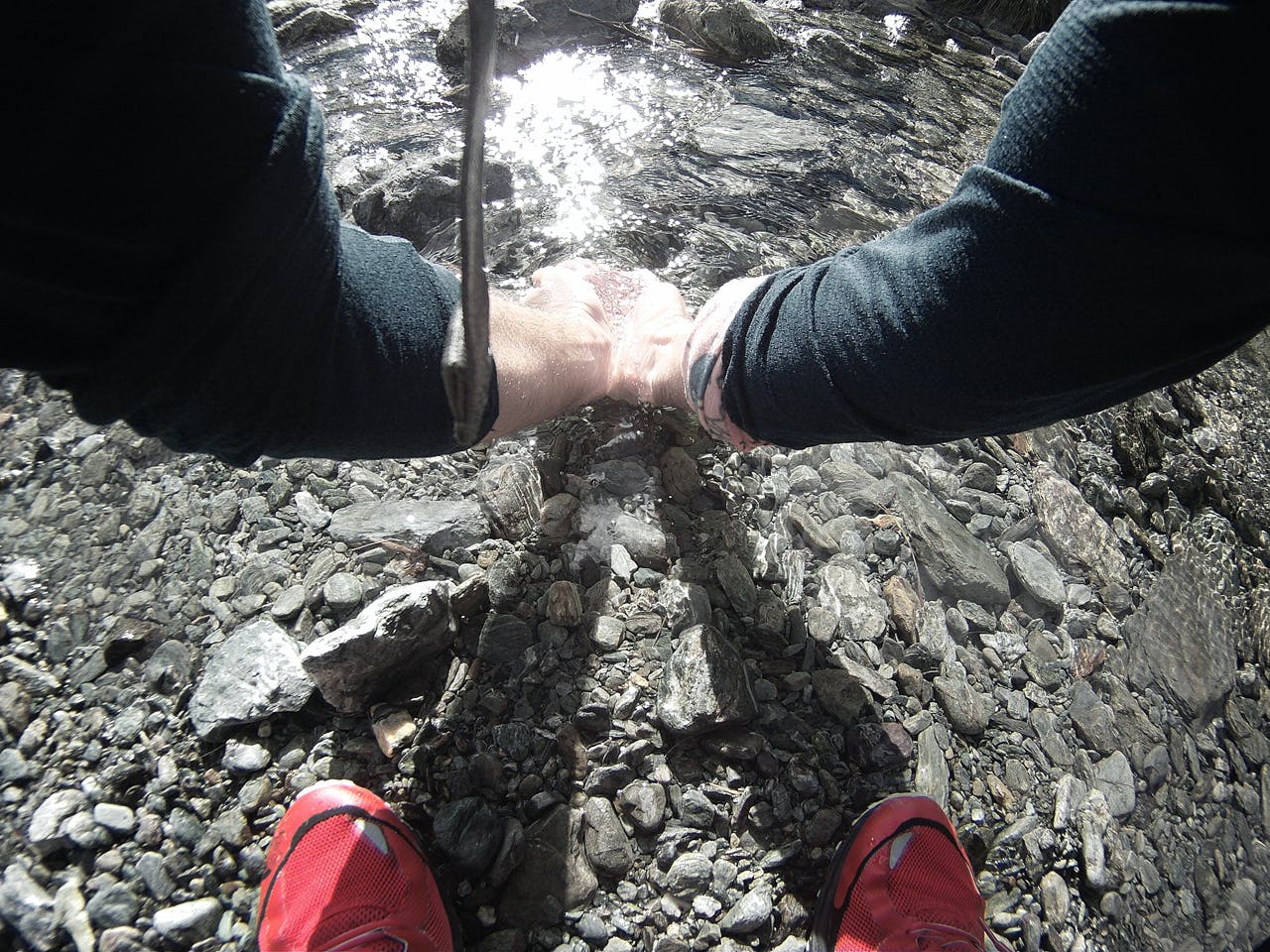 Loosing the notion of ‘What goes on the trail stays on the trail’ will be quite the tragedy. The backcountry community will have to come up with some etiquette to accompany this new technology. Hopefully it’ll be de rigueur to switch off at skinny dipping tarns!

Once the technology becomes more common there’ll no doubt be some more far reaching effects. Image-streams shared online could be used to accurately measure ecosystems’ health and wildlife numbers. And the search and rescue questions ‘When did you last see them?’, ‘What were they wearing?’ and ‘I wonder what happened to him?’ will be all but redundant.

Combined with Photosynth software, an existing system that builds three-dimensional worlds out of a composite of images, it could conceivably open up a whole new industry of virtual tourism – you’ll be able to walk the Milford Track from the comfort of your treadmill in London.

Which does of course open up some slightly thorny intellectual property questions: who owns the copyright on the New Zealand outdoors? When someone successfully digitises the Routeburn Track, will Tourism New Zealand be entitled to a cut of the profits?

In some way’s it’ll be a little sad to see traditional photography sidelined. But just like movies didn’t kill the theatre and television didn’t kill radio I’m sure old-school, posed photography will live on, perhaps as a more performance oriented art form – planking is just the beginning!

Like all technology, wearable imaging will be value neutral; that is, the gadget doesn’t make life better or worse – it’s the way people use it and react to it that makes the difference.

Historically it’s that human side of technology that’s been the hardest thing to predict. So it’s impossible to say exactly where this photographic journey will take us… but I’m sure we’ll get some great shots along the way.