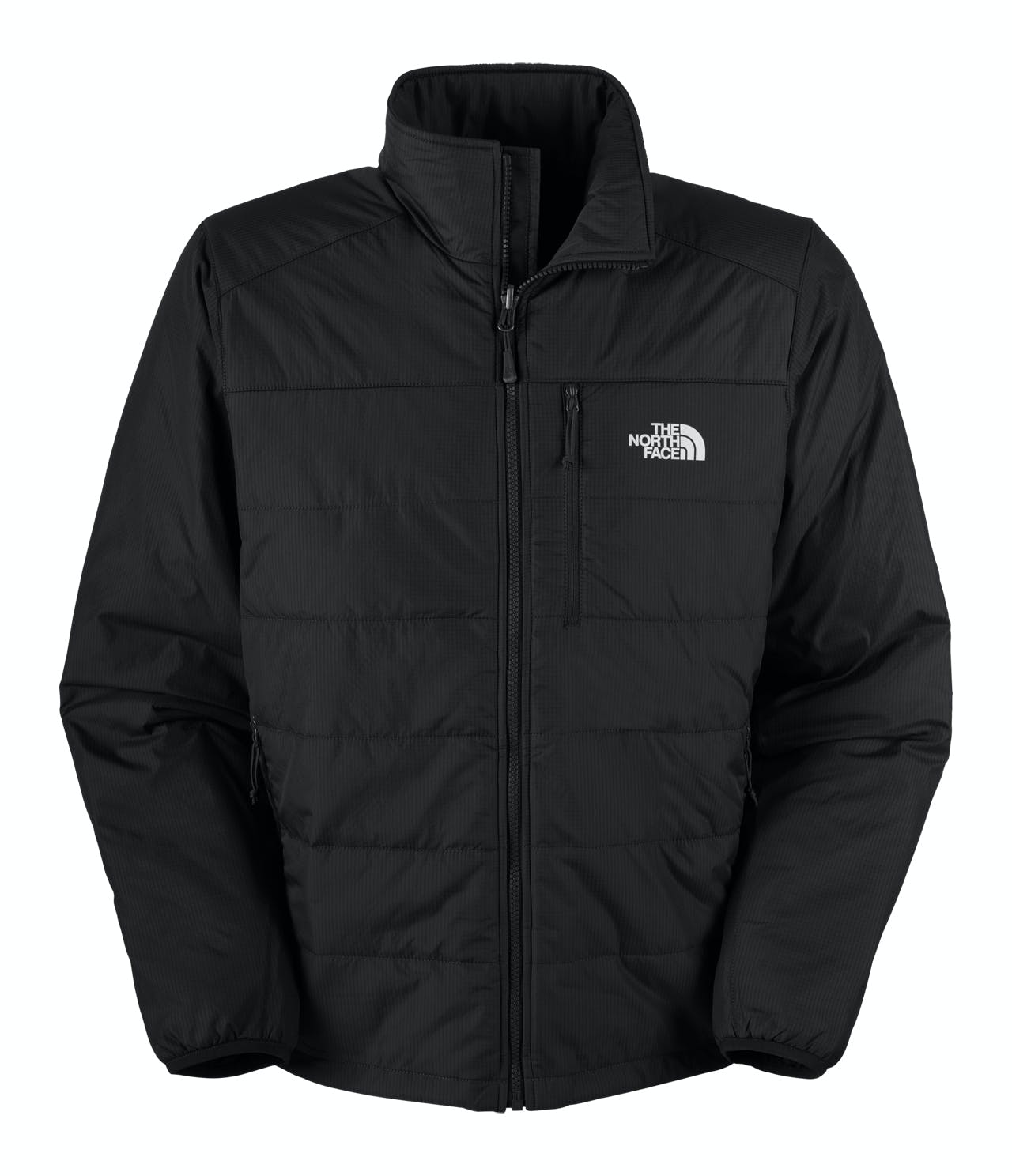 The Redpoint’s aesthetic is best described as ‘proletarian’. Presenting a featureless rip-stop nylon façade, unadorned by any attempts at stylishness and available in your choice of authoritarian black, concrete grey or police blue, the Redpoint really does bring to mind Soviet working class fashion at its best.

Okay, so you’ll never see it on the catwalk in Paris. But that’s definitely not a deal killer, especially when you consider what’s hidden behind that somewhat cheerless exterior.

In terms of insulation and compression it’s not quite as good as down, but Primaloft is significantly cheaper and it comes with a couple of other big plusses: you don’t have to be quite so worried about dodging raindrops to keep it dry and if you do manage to spill your goulash down the front of it, then washing it is just a matter of tossing it in the machine on gentle cycle – as opposed to the tedious ordeal of washing down jackets.

Although it’s minimalist, it does have the basic features covered: two hand pockets, a Napoleon pocket and draw cord around the waist. Plus it can be stuffed into its left pocket, taking up about half the space in your pack of an equivalent fleece.

The fit seemed relatively wide around the waist compared to the shoulders and sleeves, perhaps designed for the, ahem, North American figure. That’ll be great for some people, but if you’re of a lanky build, it might feel a bit like wearing a tent.

It’s not as high performance as down, but as a jacket for general use in the backcountry – where really cold temperatures are rare, but rain certainly isn’t – the Redpoint could be just the ticket. 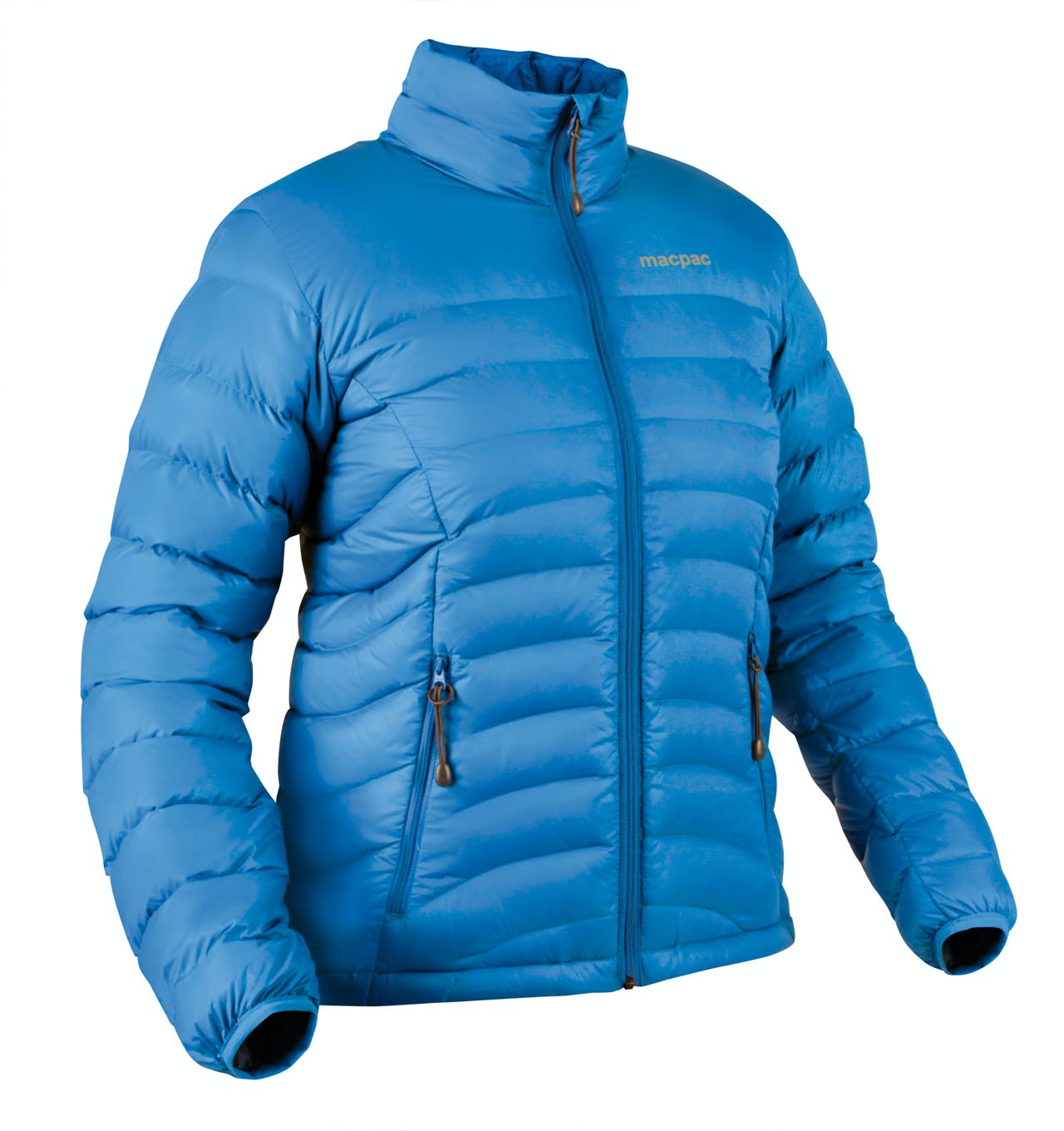 Macpac’s Nova is probably the lightest down jacket I have ever used – my kitchen scales indicate a feather weight 310g (versus the advertised 320g).

The secret to the light weight is in the 800 loft goose down (note, no feathers). The weight, and a proofed nylon outer for water resistance, are my favourite features of this jacket. Another nice feature is the narrow scalloped baffle sections which keep the down well distributed and offer stylish tailoring.

But these baffles are stitched through which could mean heat loss through the stitching. It doesn’t have a hood, either, but an insulated draft tube behind the zip helps keeps the chill out.

The jacket arrived in time for the big chill in Te Anau and also coped with a polar blast of a winter weekend in the Catlins, surprising me that such a light jacket could be so warm. The water resistance seemed to work well too when I got caught out in drizzle, although with feather gear I’m always pretty careful not to let it get wet. The jacket is also versatile – with its slim profile it fits the bill for winter high street wear but is just at home in the outdoors.

I was a bit disappointed with the few feathers the jacket was shedding, not only from the seams, which have an increased risk due to the numerous rows of stitching, but also through the fabric itself. This happens with most all jackets at some stage, though, so despite this I still think it’s a well designed and built item. It’s snug fitting to wear and is clearly a premium product. 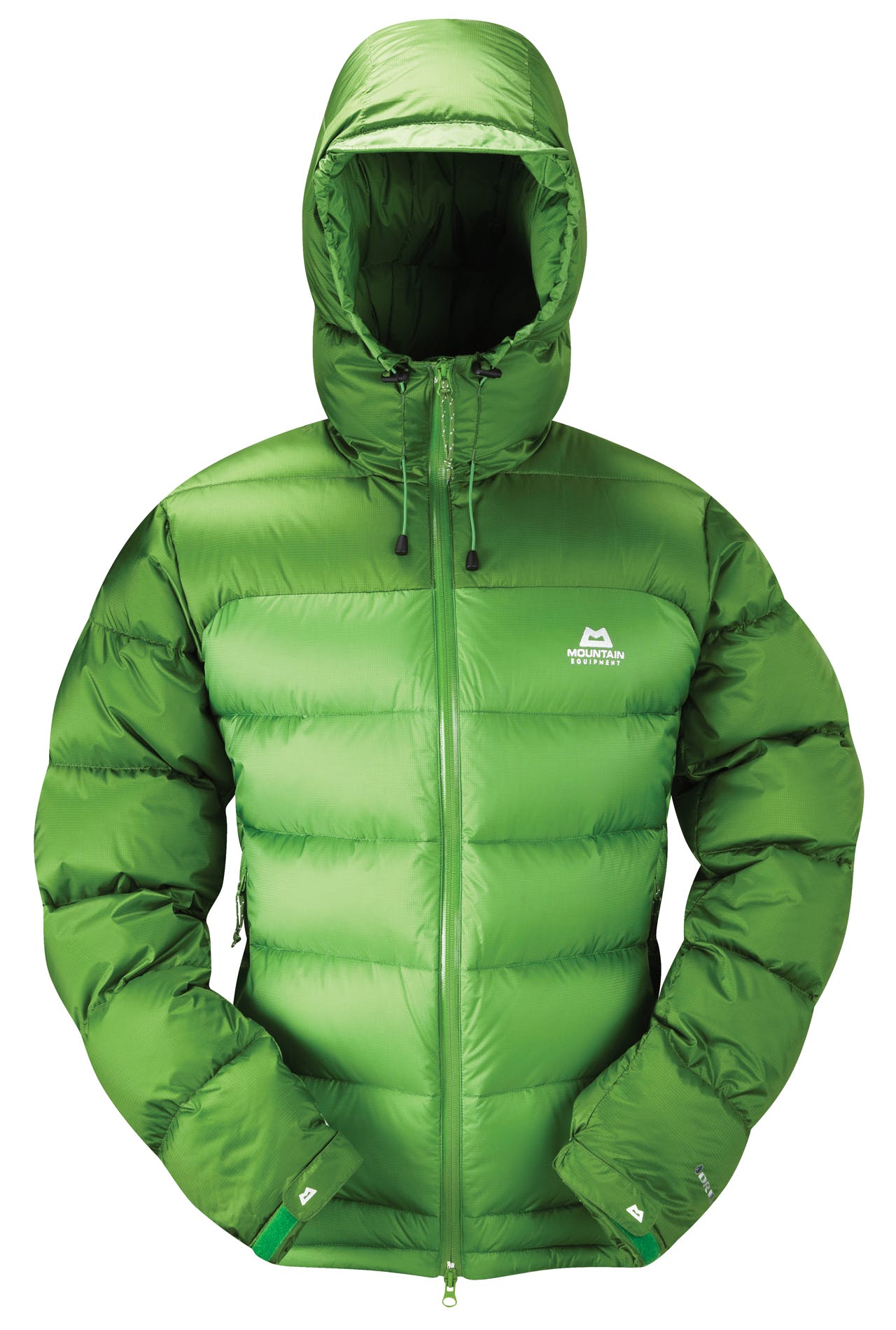 The Vega is impressively featured with 750 loft high quality goose down fill, a down hood, waterproof two-way zipper, excellent hand-warmer pockets, as well as an internal breast pocket and has all round cinch cords and Velcro to pull the jacket up tight to ward off chills. All these features add up to a relatively heavy 630g jacket though.

The jacket has a longer cut to bring it well down to cover the lower back and buttocks – this is a huge assistance in the art of keeping warm as many jackets are just too short. The hood is well filled and has a small peak and is adjustable to cover a helmet – another excellent innovation for cold climbs.

The outer Drilite loft II fabric is claimed to be ‘very water resistant’, and while I have not worn the jacket in the rain, some who have state its water repellent nature is effective. I did find the Drilite an effective barrier against the wind – a consoling thought when in exposed terrain.

Although it may compromise warmth just a smidgen, I would prefer to have a detachable hood which would add to the jacket’s versatility in those situations when a hood is not really necessary.

Overall the Vega offers supreme comfort and insulation from the cold on those winter trips and above the bush line camps and climbs. I have worn it on several winter excursions into the Canterbury high country on photographic assignments where standing about in the cold is a given. So being warm and insulated from the cold is a pre-requisite of being able to perform efficiently – the jacket accomplished this task well. 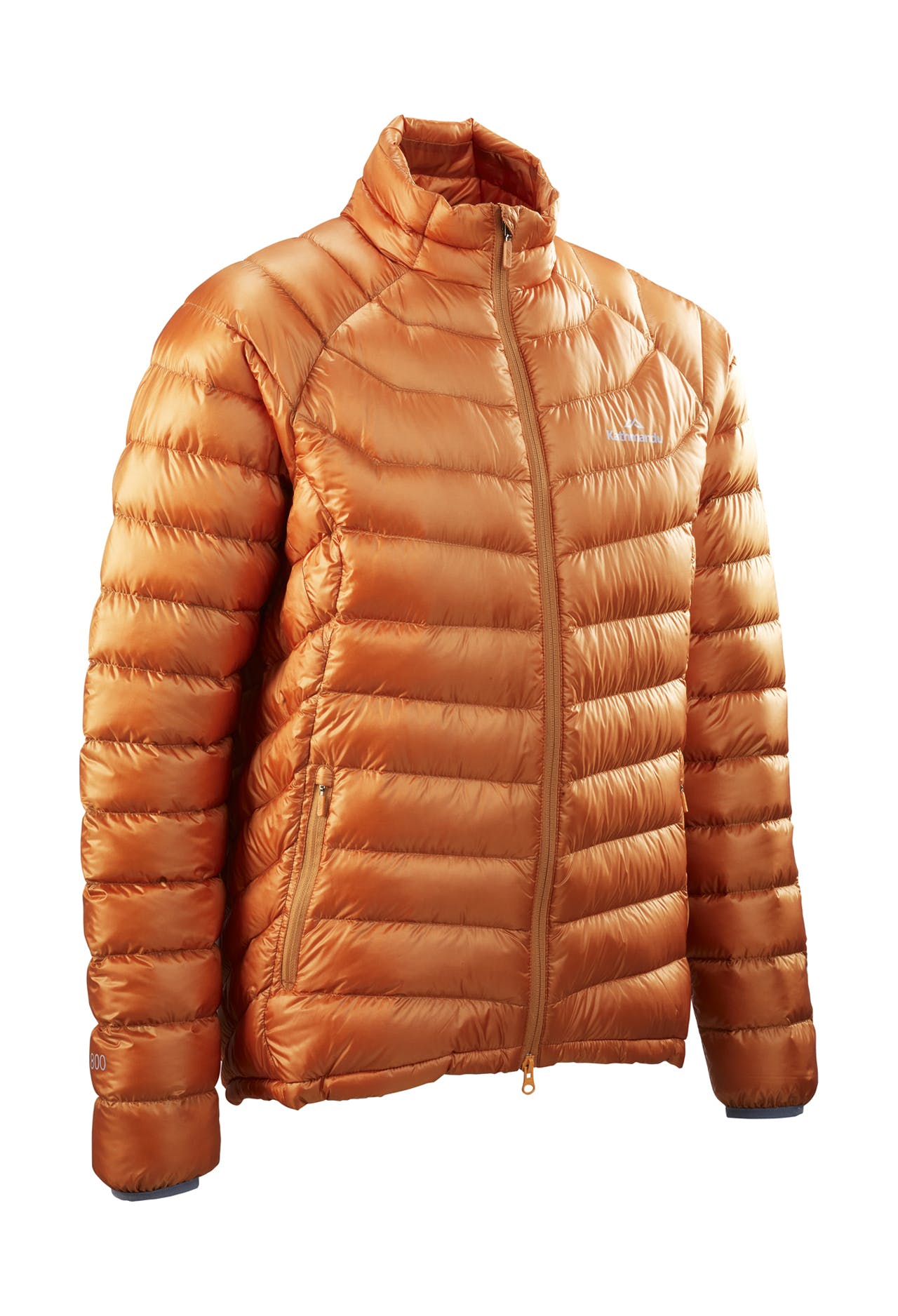 Some of my most memorable trips to the hills have been in the middle of winter, and the memories – and photos – from a tops camp in the snow in winter are hard to beat.

A down jacket can certainly make things a lot more comfortable.

There is a huge range of down jackets, from the down suits worn over 8000m through to jackets that probably shouldn’t be worn anywhere but Queen Street. Patagonia’s Ultralight fits neither of these situations.

At 235g, the Ultralight is Patagonia’s lightest full zip insulating layer. It is not designed for high altitude mountaineering – it is much more versatile than that. Its light weight makes it an ideal jacket to sit in the top of your day pack if you were rock climbing or mountain biking and wanted something to pop on while you were resting.

But the Ultralight is built to be used in the backcountry in winter too. I used it for a winter camping trip below the bushline, and it was ideal for the cold temperatures we had. It is filled with 800-fill premium European goose down, and it was snug.  The Deluge DWR water repellent fabric kept me dry in a drizzle and walking through clag.

I wasn’t able to test it above the bushline, but I expect that this jacket would have kept me happy even in those conditions.  The level of down belies its slim look.

It is slim enough that you could wear it under a shell, though personally unless you’re in some extremely cold conditions I think this would make it too hot and you’d end up sweating.