On the 60th anniversary of his ascent of a Himalayan peak considered more challenging than Everest, Norman Hardie shares his memories of a golden age in New Zealand climbing. By Tania Seward

In May 1955, Norman Hardie was a member of the first expedition to successfully ascend Kangchenjunga, the third highest mountain in the world.

This was a tremendous feat: while only 262m shorter than Everest, Kangchenjunga, 8685m, is significantly more technical.

As far as the New Zealand Alpine Club is concerned, Hardie’s climb was groundbreaking. “It was a very difficult climb,” says general manager Sam Newton, “done in great style, and at the cutting edge of mountaineering at the time.”

Yet some 60 years on, Hardie’s mountaineering achievements have been largely overlooked in his home country. A Google search reveals a smattering of newspaper articles over the years, while the Wikipedia link to Norman Hardie is more upfront: “This page does not exist.”

Hardie’s first foray into mountaineering, as a university student in 1944, was something of a baptism by fire. The party of six headed into Arthur’s Pass National Park and climbed both Mt Isobel and Mt Rolleston in deteriorating weather without crampons. “It was almost frightening,” he recalls, “but the good side of it was that I did get the thrill of being up high. I was very keen to continue – but in better conditions!”

Continue he did, with Hardie and his companions being prolific in the Southern Alps between 1947 and 1949. In that time they made the first ascent of Mt Elliot, put up new routes on Mts Dechen, Strauchon, Hopkins and Silberhorn, traversed the southern and western ridges of Mt Sefton and assisted with the famous Ruth Adams rescue on La Perouse.

A move to London in 1951 opened up the Swiss Alps, and when applications for the 1953 British expedition to Mt Everest opened, Hardie applied. While his application was unsuccessful, he was accepted onto the 1954 Himalayan expedition being run by the New Zealand Alpine Club. That expedition ascended 20 peaks over 6000m: an achievement that is highly regarded in mountaineering circles.

“The 1950s was the greatest era for New Zealand expedition climbing to the Himalayas,” says Newton. “The 1954 Alpine Club expedition to the Barun Glacier area was very large and very successful, and that rolled into Hardie’s success on Kangchenjunga the following year.”

While most of Hardie’s fellow climbers returned home at the conclusion of the Barun expedition, he stayed on to do some further exploration. It was while trekking in the hills near Kathmandu with British climber Sir Charles Evans that a telegram arrived containing Evans’ invitation to lead a renaissance of Kangchenjunga in 1955. Hardie was invited on the spot.

Compared to the recently climbed Everest, Kangchenjunga presented a formidable challenge. Various expeditions between 1905 and 1954 had ascertained there may be a viable route on the south west face, but no-one had yet ventured within 1000 vertical metres of the summit. Two expedition members, selected for their rock climbing prowess, had never worn crampons before.

The expedition arrived at the base of the Yalung Glacier, accompanied by 330 barefoot Darjeeling porters and 28 Sherpas capable of climbing at altitude. The barefoot porters were quickly paid off and the base camp was established two days walk up the glacier. “The 300 loads had to be ferried the two days walk to base camp by the 28 Sherpas and eight climbers,” recalls Hardie. “I was exempt from the load-carrying and went with George Band to start looking at approaches to the mountain itself.” 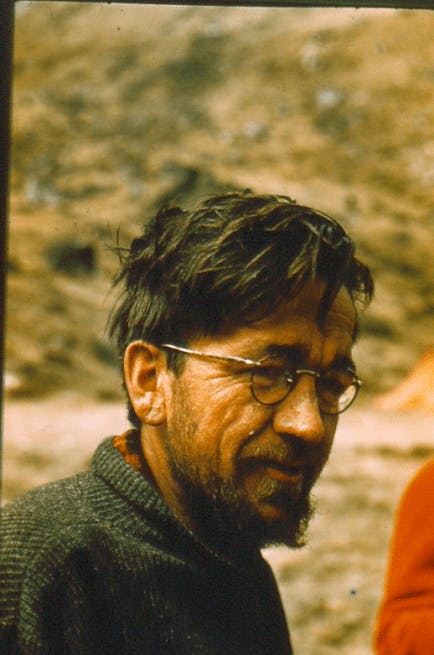 Hardie and Band soon encountered what was to be one of the biggest obstacles of the climb: a massive icefall. “It was really ferocious stuff: extremely steep and difficult,” says Hardie. “Those who had been on the 1953 Everest expedition felt that this icefall was far more active and dangerous.”

After two days of placing pitons and precariously belaying each other up rope ladders, the climbers reached the top of the icefall. To their surprise, they found what Hardie describes as a “fine looking coluoir” that would enable the hazardous route up the icefall to be abandoned.

Base camp had initially been established at the base of a rocky cliff, but was hastily moved after it became apparent that it was in an avalanche zone. “I only spent one night there,” says Hardie of the first base camp, “but it wasn’t a restful place at all. Every time a big avalanche would occur you’d feel the ground underneath vibrating, as if you were in a small earthquake.”

With their base camp successfully moved to an expanse of solid rock, the expedition set out to establish a series of camps on the mountain. “There was quite a lot of conversation in our camps about when, or if, we should turn back,” says Hardie. “We’d solved the problem of access to the bottom part of the mountain, and we’d gotten through to the base of the large ice shelf and proved that the oxygen sets were working. Should we leave it there, or should we climb the mountain and risk spoiling it for all our friends who were planning to come on the planned 1956 expedition?”

In the end it was expedition leader Sir Charles Evans, while establishing camp five, who looked over at Hardie and confirmed that a summit attempt would be made. “He looked off up the mountain and said ‘we’ll have a go at this. We’ve got the men, and the oxygen, and we’re going to have a crack at the mountain’.” recounts Hardie.

Even with camps established, Kangchenjunga was not an easy climb. Rope ladders were utilised as much as possible, but even they proved troublesome. “After a few hours in the sun, the ladders would sink down in the snow, and it was very hard to get your mitts around them,” says Hardie. “Our crampons didn’t have front points, so maintaining your grip on the ladders while carrying a big load was pretty hard going.

“It was very steep all the way. The summit ridge had massive rock gendarmes and we would often see snow being blown right off the top. From where we were at camp five, the snow-covered route across the face looked to be the best route.” 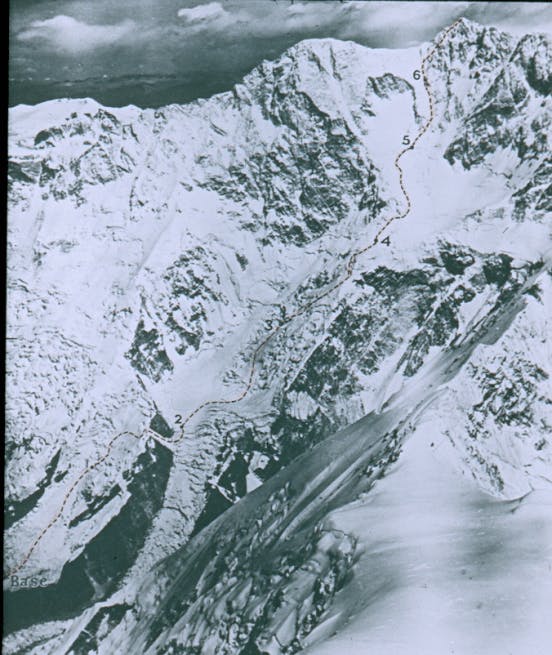 The near vertical route up Kangchenjunga.

British climbers Joe Brown and George Band made the first successful ascent, followed a day later by Hardie and British climber Tony Streather. It was after dark by the time Brown and Band returned to camp six, where Hardie and Streather were resting in preparation for their own summit bid the next day. “There was no other option,” Hardie smiles, “but for the four of us to spend the night in a single two-man tent. I had to go outside and bury our oxygen kits and spare cylinders to make enough room.”

Talking to Band while huddled in the small tent, the reason for the pair’s late descent became apparent. Instead of crossing the snow-covered face as discussed, Brown and Band had gone the entire way along the difficult rock ridge to the summit. Hardie was adamant that the route across the face was much faster, and the next day he was proven right.

“It was totally feasible to move between snow patches, and not have to remove our crampons at all,” says Hardie. “We got to the summit in good time, and were feeling good. Conditions were just so good up there that we remained near the summit for 50 minutes before descending.”

As is well-known, the summit is just the halfway point and for Hardie and Streather, the descent to camp five proved challenging. Hardie had lost an oxygen bottle on the way to the summit, and Streather had insisted on replacing it with one of his own. As a result, Streather ran out of oxygen. “Every time we encountered a nasty patch I would take off my oxygen mask and hold it to Tony’s face for a moment or two,” recounts Hardie. “That would be enough to get him through the next patch.”

Reunited at base camp and mindful of the media attention that had surrounded the 1953 Everest expedition, the climbers took considerable precautions to ensure that news of the ascent was not leaked before expedition leader Evans had returned to Kathmandu. In the end, such precautions were unnecessary. Outside of Nepal, interest in the ascent was muted.

“People just haven’t heard of Kangchenjunga,” says Hardie. “It’s a hard name to remember. People seem to remember K2 and Everest, they’re nice and simple. There is just an absolute ignorance about Kangchenjunga. When I first came back I was mildly cross about it, whereas now I’m past worrying.”

“There’s plenty of good mountaineers littered through history, but Hardie had a whole other suite of skills on top of that. He wasn’t just a mountaineer in his day – he was a decent surveyor, a well-regarded engineer and a good administrator. There’s no doubt that he has made a huge contribution to both mountaineering and exploration.”