The speed of the coronavirus pandemic has caught everyone by surprise, not least Te Araroa Trail walker Katrina Megget

It was as if the farmer’s lips were moving but no sound was coming out, so sudden was my state of shock. Within 30 seconds my life had been turned upside down and my goal of reaching Bluff in the next seven days almost instantly evaporated.

The words had erupted from the farmer’s mouth like bullets and I was overwhelmed with the onslaught of rapid-fire doomsday information, delivered from two metres away.

It wasn’t supposed to happen like this. Bluff and the finish was in sight, yet, here I was, seven days out from touching the signpost that marked the end of the 3000km trail and a new reality had suddenly crashed into me.

My boyfriend and I had been hiking through Southland’s Takitimu Mountains for the best part of three days. There was no internet, no news, no coronavirus. Indeed, Covid-19 was far from my mind having spent the previous afternoon battling an unexpected snowstorm on top of a 1000m high mountain and contemplating the learnings from that.

When we had left Te Anau three days prior, New Zealand had only just entered Alert Level 2 – disease contained but risks of community transmission growing. We had watched, with a sense of dread from one of the holiday park cabins, the live press conference where Prime Minister Jacinda Ardern announced all foreigners would now be banned from entering the country.

Extreme, I thought at the time but believed it unlikely – perhaps naively – that the alert level would ramp up faster than I could walk to Bluff. Friend after friend mirrored our thinking – it was probably safer in New Zealand’s great outdoors than the communal kitchen and toilets of the holiday park.
And so we had set off into the middle of nowhere, carrying eight days of food, a personal locator beacon and completely prepared for sudden changes in the weather but not prepared for – and not expecting – a total shutdown of the country.

Life changed as we ate our lunchtime cheese and crackers in the middle of Mt Linton Station, a 12,145ha privately-owned agribusiness, when the farmer came zooming towards us on a quad bike. Practising social distancing, he updated us on the alarming pace at which Covid-19 had gripped New Zealand and the extreme measures that were about to come into force in a little under 36 hours.

What were we to do? Keep walking on the premise that the New Zealand wilderness was still probably the safest place from coronavirus or bail?

Continuing to walk made a lot of sense, but then I feared we would reach Colac Bay, proper civilisation, in several days’ time, and find there was no accommodation, food or means to transport us elsewhere. Then what?
It was decided. Exit the trail today at State Highway 96 and hitchhike to Invercargill. We had just four hours of walking before we got there. So, the race was on. 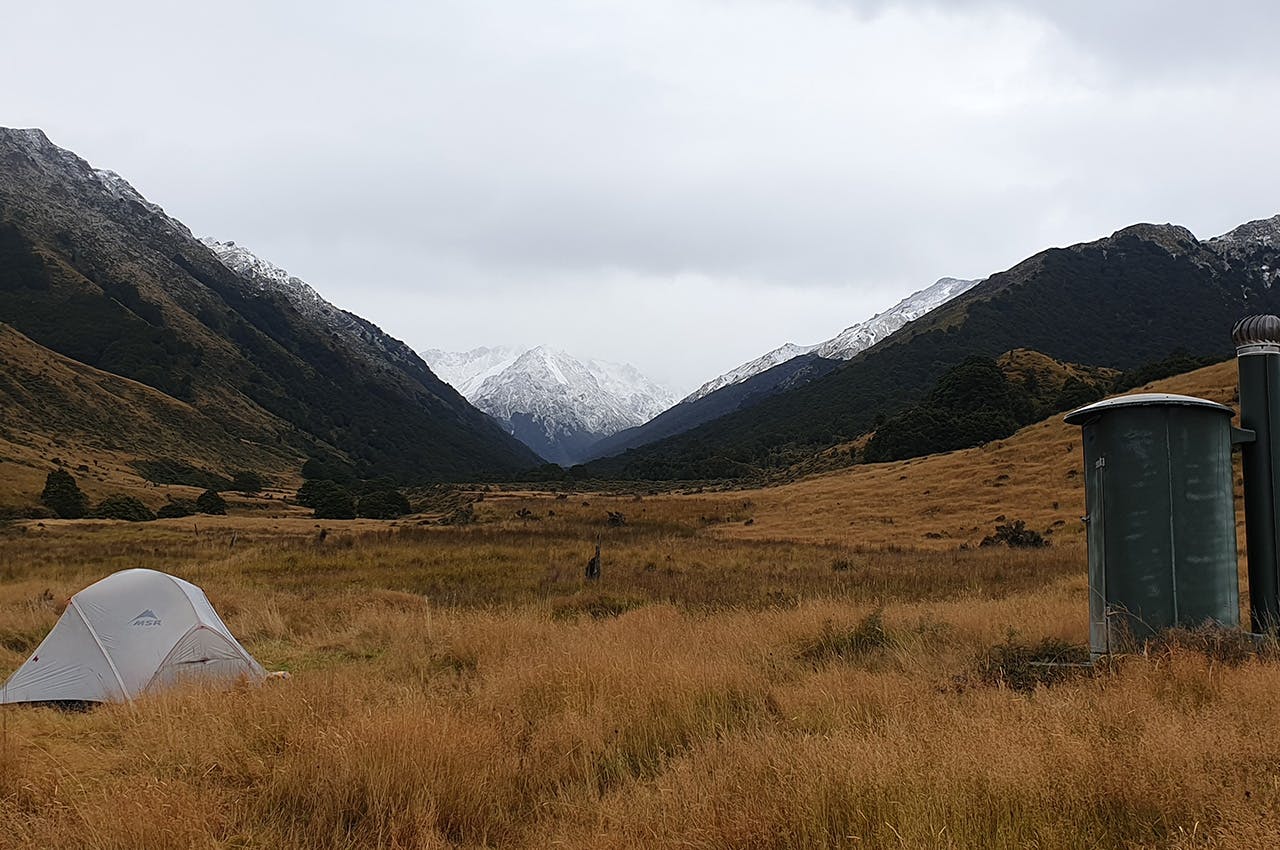 The morning of what turned out to be the last day on the trail. Photo: Katrina Meggett

Our pace increased. No longer did we marvel at the rolling hills or stop and watch the animals. We were walkers on a mission, thoughts of coronavirus and an apocalyptic world swirling through our minds.

That morning I’d been excited – just eight days until Bluff and the finish of the Te Araroa after months trekking through the New Zealand wilderness. Somewhere from the high point after leaving camp had been a view of the coast, hidden behind a smudge of grey cloud. But it was there. The finish was virtually in sight. Now I was walking my last few kilometres, sweating desperation and fear, about to enter a new world and a new normal.

We stood in the middle of a deserted highway. It stayed that way for 15 minutes before a dirty four-wheel drive came around the corner, the driver pulling over only at the last minute when his conscience kicked in. Te Anau was his destination. It was good enough for us.

There was something ironic about ending up back where we had started three days earlier and the tiny tourist village was even more like a ghost town. It was only down to luck that a motel took us in. It seemed renting a car wasn’t an option, hitching elsewhere was out of the question, even walking beyond the neighbourhood was a no-go. We were ‘stranded’ inside these four yellow walls – our home for at least the next four weeks.

We had nothing bar the stuff in our backpacks. Just six pairs of socks and seven pairs of underpants between us. No laptops, no game consoles. Just our phones, a tablet and a kindle. There was no DIY to keep us occupied, no garden to keep tidy, no pantry and swish kitchen in which to cook up a storm, no filing to clear. Thank goodness for the stationery shop and its meagre selection of colouring-in books.

It will be a long four weeks. The mountains on the distant shores of Lake Te Anau call to me. My legs are restless. But I am warm and showered and there’s plenty of food.

We were lucky. There will have been TA walkers who weren’t.