The official opening of the new Paparoa Track will go ahead as planned with a special ceremony in Blackball on November 30 despite a slip closing the middle section of the track.

The track will be partially open from December 1 for walkers and bikers who have already booked, but a difficult to fix slip means the middle section of the track will be closed until repairs can be made.

The aim is to have the track fully open on December 22, however, that will depend on the weather.

The track has been nearly fully booked since earlier this year.

Department of Conservation, Western South Island operations director, Mark Davies said that while it is disappointing not to have the full track available, wild weather causing slips on tracks is relatively common across the West Coast especially in spring.

“We are regularly undertaking repair work to tracks and structures on walks throughout New Zealand. It is just bad luck that we’ve had this happen right before opening.”

“We have 944 people booked with 177 groups on the Paparoa Track during December. We are giving all of them a full refund while offering them the opportunity to walk or cycle part of the track at either end. This recognises the cost and inconvenience they face because of the disruption.

For those already booked, the track will be open from both ends for overnight trips into either the Moonlight Tops or Pororari Huts

“DOC appreciates that for some visitors it may be difficult to change their travel plans at this late stage, so we wanted to enable them to experience some of New Zealand’s newest Great Walk,” said Davies.

DOC booking services staff will be in touch directly with those who have booked to make alternative arrangements.

A Geotech inspection has confirmed that the track has slumped down to bedrock. The section of affected track is 20m long, and due to its location on a very steep side slope it will be difficult to fix – requiring re-benching and re-surfacing. 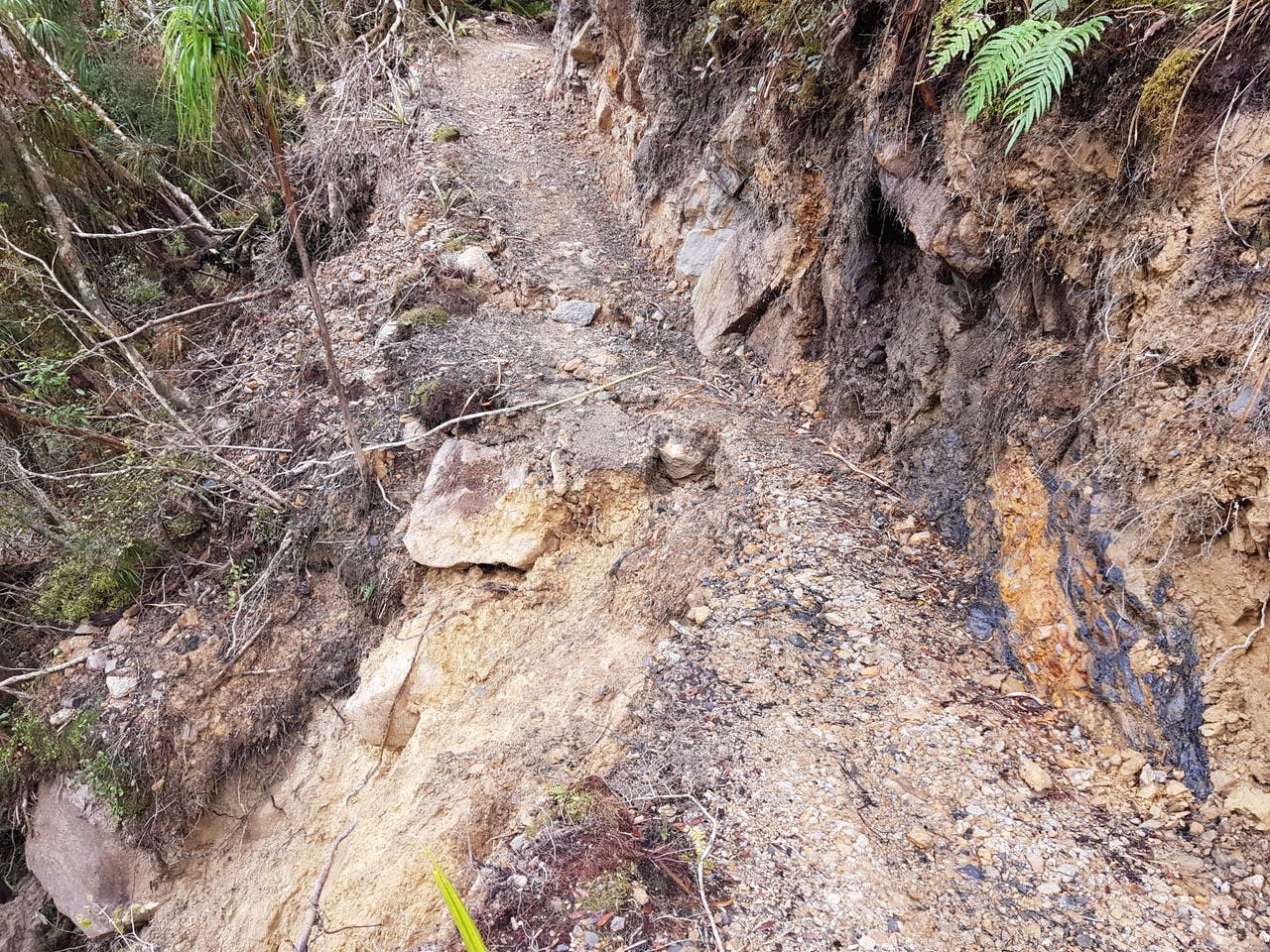 The Slip on the Paparoa Track is not expected to be fixed until December 22. Photo: DOC

“Contractors will drill and blast the bedrock to reinstate the full width of the track. Due to the remote location contractors and machinery will need to be helicoptered in,” said Davies. “The equipment being used to clear the slip is small, specialised and designed for constructing walking and cycling tracks in challenging environments.”

A community celebration with Ngati Waewae, Pike River Families, DOC staff, contracting teams and the public will be held in Blackball on the 30th of November before the first walkers and bikers begin using the partial track on 1 December.

The opening of the $12 million track, where work began in 2017, has been eagerly awaited by walkers and mountain bikers keen to explore this previously little known part of New Zealand located just north of Greymouth on the South Island West Coast.

The Track has been built by DOC on behalf of the NZ Government at the request of the Pike River families. The project was created as a thank you from the families to provide a lasting economic benefit to the West Coast, and as a tribute to the 29 miners who died in the 2010 Pike River Mine Disaster.

The Track is 55km long, and required 41km of new track to be built, as well as 4 major suspension bridges and two new 20 bunk huts with hut warden quarters.

The track traverses from Blackball on the eastern side of the Paparoa Range over the ranges through Paparoa National Park and to Punakaiki. Once fully open, walkers will take three days to experience the track, while mountain bikers can complete it in two.

The Paparoa Track is largely fully booked throughout the Great Walk season, with up to 77 groups booked per week.