Read more from the
November 2017 Issue

Read more from the
November 2017 Issue

After a steep scramble, we reached a small platform, beyond which was our crux – a narrow, exposed and broken knife-edge (a cheval), leading to the summit of Te Hekenga. With our packs on and no rope, our resolve started to dissolve.

“Just pop out there for a photo, Pete,” Joe suggested. “We can’t retreat without at least one.”

As I reluctantly balanced my way across the crumbling narrow top of the dreaded Te Hekenga cheval, I suddenly saw a way through.

“Actually Joe, I reckon there is a way across,” I said. “See those nicely formed steps there?”

And lo, the Cheval Kid was born. Joe perked up and soon crossed the cheval without his pack to see if the going was any better around the bluff on the far side. In a moment a huge smile appeared, confirming that “Thunderbirds are go, with packs”.

In Maori, ruahine means ‘important elderly woman’. As a Wellingtonian, I’ve been many times into the nearby Tararuas, but the Ruahine Range is much less familiar to me. My main experience there had been a solo winter climb a couple of years ago to Mangaweka, the highest point on the range. On that trip, I encountered much more gentle terrain than I was used to further south in the Tararuas – indeed more like the soft curves of a sensuous woman.

Now, with my pack on, preparing to go back onto the cheval, any thoughts of sensuous curves had evaporated.

I had been asked to join two backcountry veterans, Shaun Barnett and Joe Nawalaniec, on a four day trip into the hills. While the weather had been all over the place, with unusually high rainfall across much of the country, we could see a fine spell looming over the Ruahines, so this is where we headed. Shaun plotted a circuit joining many of the range’s high points in one 33km loop.

We started at the Mangakukeke Road end, which is surrounded by private farmland. Beforehand, I called ahead to secure permission to pass across Richard Gorringe’s farm on our way in and Colin Thompson’s on our way out. Not far above Gorringe’s farm is Purity Hut, beyond which we’d spend most of our time above 1500m on an expansive round trip from the west to the east and back again.

Along with the opportunity for me to get to know the Ruahines better, the beauty of our route lay in being on the tops for all but a couple of hours on the first and last days, and being able to camp out under the stars for three consecutive nights.

We set off across Gorringe’s farm and soon met the man himself, plus an impressive team of dogs, on the ridge leading to the forest park. Gorringe has a reputation for being pretty blunt about access permission. He says he’s lost stock over the years due to trampers passing through, which has hardened his approach. But both times I’ve needed to cross his farm he’s been helpful and happy to have a yarn, which we did this time, while wiping sweat from our brows. It was sunny and humid and the access ridge is steep.

Once into the forest it was only another hour or so to Purity Hut and its panoramic views to Mt Ruapehu. But our destination for the evening was Iron Peg at 1703m, the route to which is straightforward, lulling me into a false sense of comfort. As we progressed higher, though, the wind intensified.

Beside several tarns near Iron Peg, we battled with surprisingly chilly, fast-moving cloud, swirling about as we strung up our tent and fly. After dinner, with the cloud clearing, we sauntered along the Hikurangi Range to tag Mangaweka (1731m). Through breaks in the cloud we enjoyed a blood-red sunset.

It was actually a lot colder than we’d expected overnight, but dawn was a photographers dream. A fantastic lenticular dome hovered overhead, catching the sun’s rays in its alien-like, concave underbelly. Soon though, we were back in the murk as cloud again swamped us. This is how it remained as we dropped off Iron Peg and traversed the ridge towards Ohuinga, some six-kilometres away and with about 550m of ups and downs.

As we plodded through the mist, it felt more and more like we were in the rugged Tararuas than on any gentle womanly curves. By the time we reached Ohuinga, the weather was clearing, revealing an end-on, foreshortened view of Sawtooth Ridge. It didn’t look far but after 3km of travel on the steep-sided knife-edge ridge, often demanding three or four points of contact, we were happy to reach Tiraha (1668m) at the far end. The wind still howled, so we dropped off the west side of Tiraha in search of a sheltered bivvy spot on the eastern side of the saddle at 1600m.

Joe, while never running out of energy, wasn’t keen on another cold night, so he opted to descend the 300m to Howletts Hut on Daphne Ridge. There he could read his newspaper and then charge up in the morning to re-join us. Shaun and I wanted to be in the best spot for sunrise, so we stayed on the tops. As it turned out, the night was not as cold and, in my bivvy bag, I marvelled at the sky, clear and spray-painted silver with galaxies of stars.

The weather had improved by morning, boding well for the day’s challenges. On top of Tiraha, we watched a huge catchment of cloud, channelled between Ohuinga and Tiraha so it spilled in slow motion over Sawtooth Ridge. Ruapehu hovered above the cloud in the distance as the whole magnificent spectacle took on the changing colours of sunrise.

Soon Joe was back with us and we set off over Taumataemekura (1682m). Due to the high rainfall we’d had in the previous weeks, we came upon scores of tarns along the route.

It was a lovely morning but we did have something on our minds that kept us a tad on edge. Our crux was fast approaching – a cheval near the summit of Te Hekenga that Gorringe had warned us about. We’d seen Te Hekenga from various angles the day before and it had looked somewhat gnarly. Now, as we got close, it seemed to alternate between ‘yeah nah, no worries’ and ‘hmm’.

At the base of the steep craggy section leading up to the cheval, a trail branched off around the base of Te Hekenga on the southern side. The climbing option looked intimidating and Shaun decided there was no good reason to ignore a perfectly good trail. Joe, on the other hand, was bursting at the seams to get onto the cheval.

So, up he and I went, both hands required. Upon reaching a little platform just before the cheval, I realised I didn’t like either option facing me – go over it, or down-climb what I’d just come up. Joe joined me and took off his pack, tentatively venturing out to confirm that indeed it was dodgy ground. Between the two of us though, we eventually recovered our commitment. Getting across unprotected was, nevertheless, at the edge of my comfort zone.

Afterwards, on the summit of Te Hekenga, where Shaun had come around and up to meet us, the two veterans agreed that the cheval was the gnarliest section they’d encountered on any non-volcanic terrain in the North Island. That made me feel better.

With our crux behind us, we still had some work to do before the day was done. It was clear and calm. And hot. Beneath Maungamahue we came upon two crystal clear tarns which were too inviting to go past. After a cooling dip, with replenished water bottles, we climbed Maungamahue to enjoy an expansive view taking in virtually our entire route. From this aspect, it looked big and impressive. And our intended campsite – a tarn at 1440m – was less than three-kilometres away beneath Pourangaki at the top of Dirty Spur. Life was wearisome but good.

“Oh no, that’s not good news,” Shaun suddenly said. He had just discovered, as we crashed our way through waist-high tussock and spaniards, that the levy was dry. How ironic that, after passing so many brimming tarns, the one we needed to be full was empty. Shaun’s theory was that the luxuriant tussock around the tarn had drained it. He was actually able to extract half a litre of water by digging a hole beneath one of the tussocks, all of which sat bedded in quite soggy ground. Too arduous to stay and camp though, so only one thing for it, plod on down to Kelly Knight Hut, 600m below.

At about 1200m, Shaun piped up again: “That’s weird, I can hear trickling”. Indeed he had and soon, just before sunset, we’d strung our fly across the trail beside a tiny babbling brook on the ridge. It was a lovely way to finish the day. We even had a picture postcard view over the lowlands to Mt Ruapehu.

After a good sleep and a leisurely breakfast, we set off on the final, mostly downhill stretch to the car. Beyond Kelly Knight Hut, the last couple of hours were through native forest, tracing the Pourangaki River and then across farmland. It had been a wonderful round trip, dispelling any misconceptions I’d had that the Ruahines are a softer option than the Tararuas. Important elderly woman maybe, but, if so, still powerful, rugged and suffering no fools. 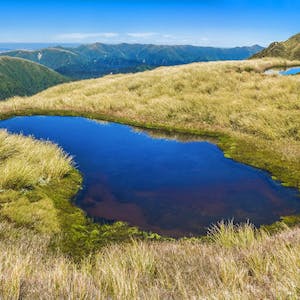 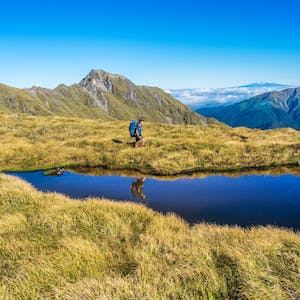 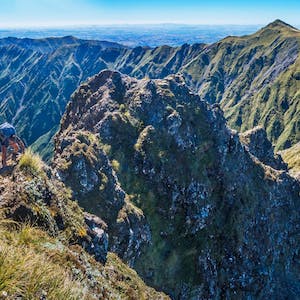 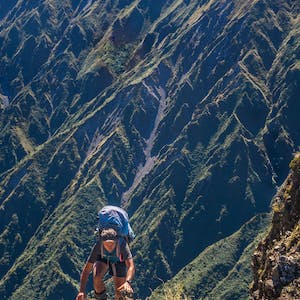 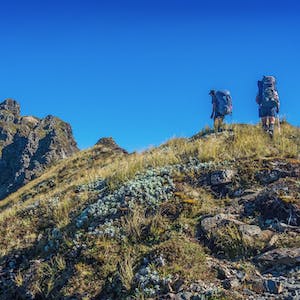 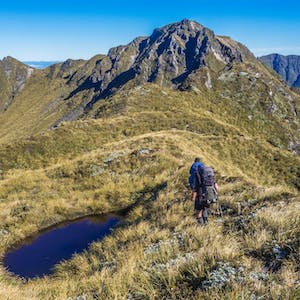 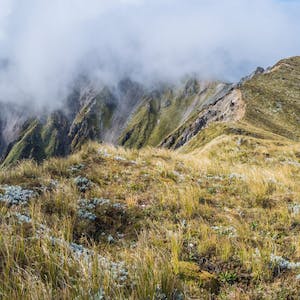 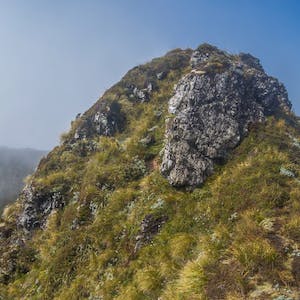 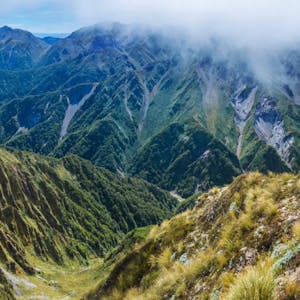 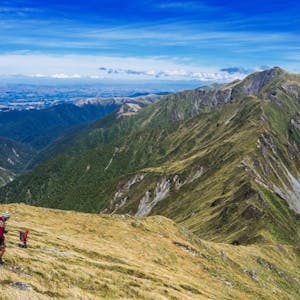 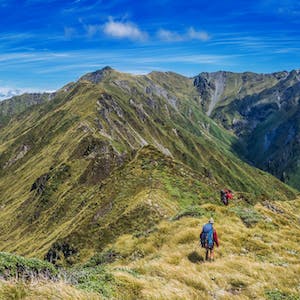 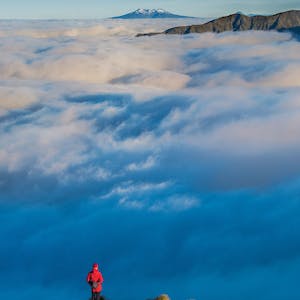 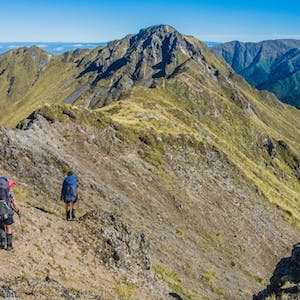 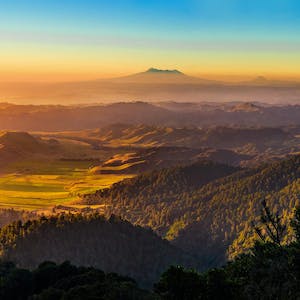