Jim Clemson left a well paying job in Los Angeles for the wilds of Tongariro National Park. Although he’s not sure how, it’s a decision, he says, which changed him

I came to New Zealand looking for a break from the monotony of daily life. I was an investigator for the County of Los Angeles locating and notifying the families of unclaimed bodies. It became the same day after day: check my inbox for new cases, work on closing as many as possible and try to end the day with fewer cases than I started with. Forget helping people, my goal was closing cases.

I graduated from university with a master’s degree in public administration a few years ago and after working for a while discovered I wasn’t as right about the world now as I thought I was at 25. I still wanted to help the community, but instead of a department devoted to protecting the voiceless, I found one motivated by personal ambitions. I was making a good living selling my soul and I felt terrible.

I would notify family members over the phone of the death of a loved one but I also had to get certain information as well. Grieving relatives often cried or told me of the deceased’s life and I just needed to ask my questions and close my case. I didn’t like the person I was becoming.

One night in a bar talking to my friend’s brother who had just arrived home from India and was already planning a working holiday to Australia, it clicked.

For some reason Australia didn’t appeal, but New Zealand; now that was somewhere I could see myself going. That night I went home and started looking for opportunities ‘down under’. Emails went flying across the Pacific and a few months later I received an email from the Department of Conservation asking if I was still interested in volunteering as a hut warden. ‘Yes’, of course, ‘yes’. I wanted to claim my spot before thinking about it. I quickly found out what hut wardens do and that tramping was the same as hiking. Once I’d committed to New Zealand the rest was easy, especially quitting my job, and after a few weeks I was on my way.

A season spent in the hills of Tongariro is probably the best job I’ll ever have. Don’t worry about not getting paid (actually, hut wardens get a weekly food allowance of $100); it wasn’t really an issue. In fact, sometimes, when my chores were done for the day and I was out exploring the park, I thought I was overpaid. I spent over three months doing exactly what I daydreamed about whilst sitting at my desk in my old job.

As a hut warden I was responsible for one of the four huts on the Tongariro Northern Circuit. I would be in the park during the week and could spend days off at Turangi. At the beginning of the next week I’d hike to another hut and be able to explore a completely different part of the park. I spent at least three weeks at each hut with an extra week at the luxurious Waihohonu Hut where the warden’s quarters have a fridge and shower. 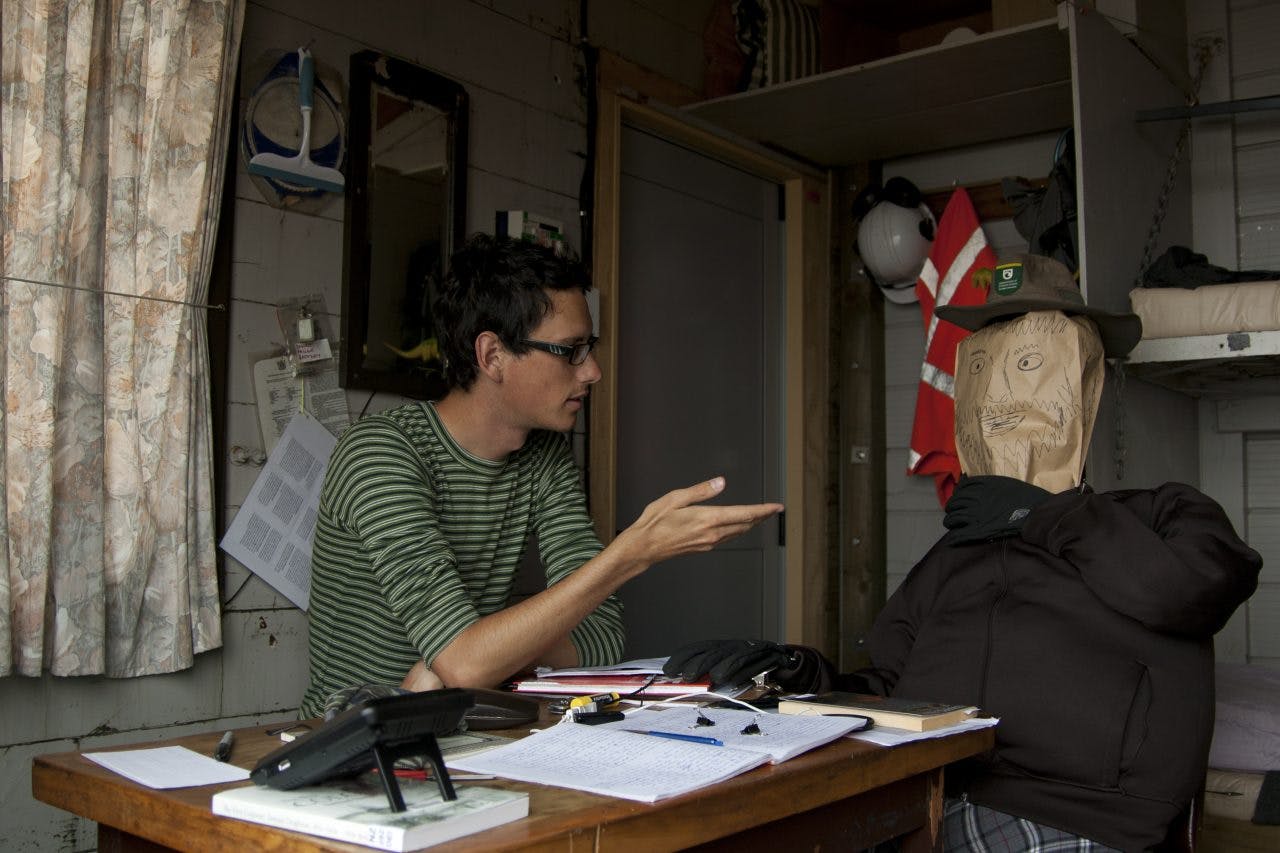 Hut wardens tend to have a lot of time on their hands. Jim made a ‘friend’ to talk to. Photo: Jim Clemson

The funny thing is that volunteering for DOC allowed me to do more hiking and travelling than when I was working. These are the same things I was working to afford but never had time to enjoy. I climbed mountains and crossed rivers. I talked to people from all around the world and even got a few helicopter rides. I was freer than I’ve ever been in my entire life. I didn’t have to worry about Monday morning.

Spending months in the same piece of wilderness is an amazing experience. I got to know the mountains, weather and tracks of Tongariro better than anywhere I’ve ever camped. I climbed Red Crater more times than I care to count, Ngauruhoe twice and walked through the desolation of the Oturere Valley.

One of my favourite spots in the park is Upper Tama Lake. It has clear blue water and beaches that look like they’ve never been walked on and it even looks like the USA if you want it to.

I can honestly say that I lived in the park probably more than most people live anywhere they’ve ever stayed. Back home I saw so many people moving through life without looking around and experiencing what’s around them. I’ve been there; seeing the world through a haze. Perhaps the most important thing I realised out there is what is actually important. Clean air and water and some open ground are far more vital to our health, both physical and mental, than we care to admit.

I grew to know the mountains. I could look up at the sky and tell if it was going to rain or clear up. I watched the mountains lose the last of their snow as summer advanced and watched them as they futilely tried to hang on as winter approached. I watched the tussock change colour with the seasons and the sunsets change colour as the night approached. The park was in a constant state of change; the plants and animals preparing for summer or winter, the very mountains changing from geologic forces I won’t ever understand and the daily show the sky would put on as the clouds and stars made their journey above me.

Of course, spending so much time in the wilderness meant I caught some terrible weather. On my last hike from Ketetahi I was knocked down by 90km/h winds, freezing rain and a wind chill that dropped below -14ºC. For a kid from LA this is pretty intense; I thought it never rained anywhere.

Trips to beautiful places like Upper Tama Lake were the best part of the job. Photo: Jim Clemson

As a Southern Californian, I also found the complete lack of good Mexican food a serious drawback.

As for being a hut warden, the job itself wasn’t very glamorous. I’d get up around 8am for radio call and make sure the hut was clean. If I was really lucky and had good hutters I wouldn’t have to do too much. Then there was the daily trip to the long drops where I really earned my keep. Once the hut was sparkling clean I was basically free to tramp around the park. I wouldn’t have to be back at the hut until about 6pm for evening radio call. Then I’d end the day by checking everyone in and explaining the rules.

(I was told that my hut talks were a bit “stern” so I’d like to take this opportunity to apologise to anyone who felt I was too harsh, but it’s pretty important that you guys pack out all your rubbish and sweep up the hut. Let me tell you that I genuinely tried to tone it down.)

The hardest thing about being a hut warden is the isolation. I went from a city of 10 million people to a country of four million and from seeing my friends and family and my Internet anytime I wanted to checking my email alongside teenagers at the Turangi Library and calling my mum so she’d know I was still alive on a phone card at the DOC office.

When it rained, which apparently happens all the time in New Zealand, I found myself really cut off from the rest of the world. The rain kept all the trampers away and kept me away from the mountain.

I had to find entertainment for myself and there are only so many books I can read in a day. I made a basket, sewed pouches for my backpack and even made a friend to talk to on a particularly dreary day. Out in the wilderness I had a lot of time on my hands.

I was sorry to leave the park but also glad to get home. My time in Tongariro has made me a better person, although I’m still figuring out how. Next I’m off to Yellowstone National Park where I’ll be working at one of the hotels. Not quite as good as my job with DOC, but you could never really beat that ‘office’, and at least I’m getting paid.