Another bogus Department of Conservation sign has been spotted by trampers.

In November last year, Wilderness reported on a series of humorous signs in the same font and colour scheme of legitimate DOC signs that had been cropping up around the conservation estate. In January 2013, another sign was spotted blaming John Key for the poor condition of Staircase Hut

Those signs asked trampers not to ‘defecate in National Parks’ and to ‘wear nappies’. One sign even blamed a lack of funds to maintain Staircase Hut near Dunedin on those who had voted for ‘that dork John Key’.

The latest bogus sign to be discovered was seen at Bullendale Hut in the Mount Aurum Recreation Reserve near Queenstown. It reads: ‘Warning! Children conceived in this hut are the property of the Minister of Conservation’.

Antony Hamel had tramped to the hut with friends and spotted the sign on the outside of the hut door.

“I was very amused,” he said. “It is on laminated colour paper which looks like the real thing unless you look very closely.

The tacks were a bit of a giveaway, though.”

Hamel said the many miners’ huts in the area are “fantastic” and recommended others to visit. “The goldfield has large amounts of machinery still present and its remoteness has meant it has not been stripped bare like many [fields] in Otago.” 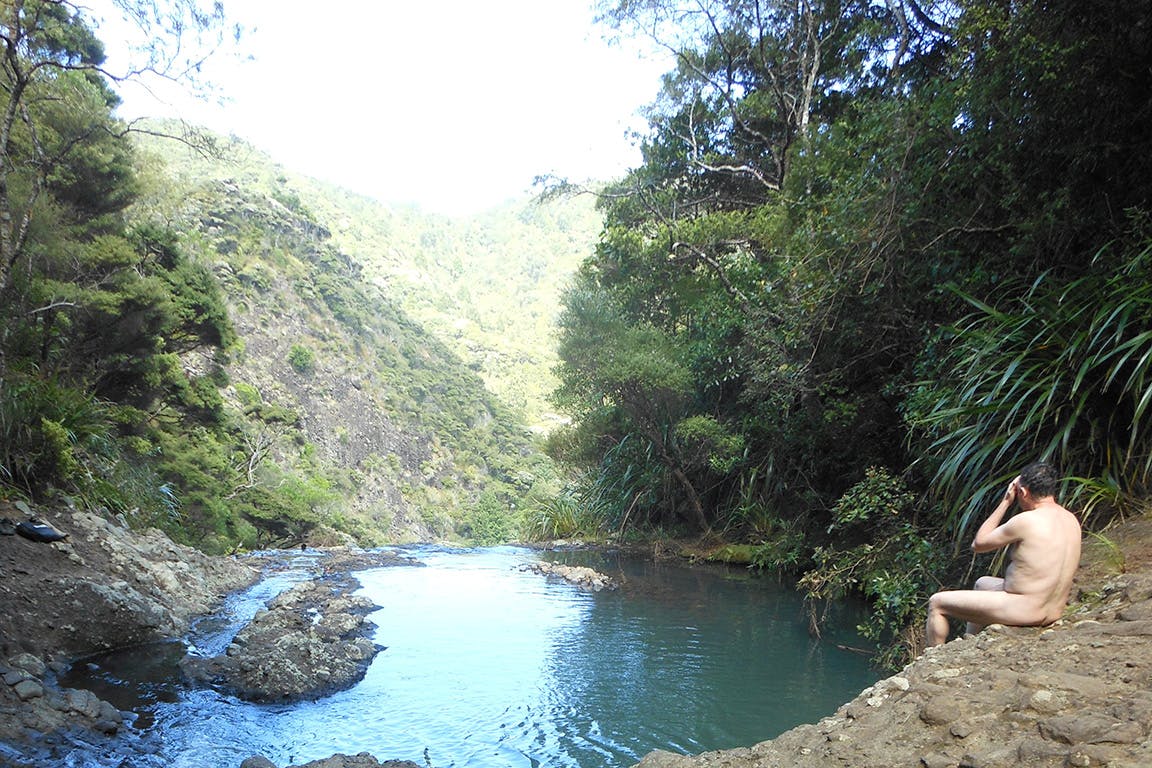 The arrival of summer gets all sorts of people back outdoors, including butt-naked trampers.

In June, Wilderness reported a number of nude men have been seen over the last couple of years on tracks around Wanaka and in the Waitakere Ranges.

Wilderness staff writer Josh Gale was running between Karekare and Piha on December 19 and came upon a naked man sitting above a water hole near the edge of Piha’s popular Kitakita Falls. When queried about his lack of clothing, the man said he was just taking a dip. There was no-one else present and the track had been quiet.

“He was very relaxed about it and made no attempt to cover up,” Gale says. “He had a look of contemplation – like he was enjoying taking in the environment a la naturale.

“I felt a bit awkward about the situation, but he was quite friendly and even pointed out the best spot to get a photo.”

Gale said the man had a small pack and clothes nearby.

An international hiking forum rated New Zealand as one of the best countries in the world to naked hike.

When asked about this, a DOC spokesperson said the department isn’t looking into this as a way to increase tourism.

New Zealand does have an online naturist club which has a picture of man naked tramping at Mokoroa Falls in Goldies Bush. 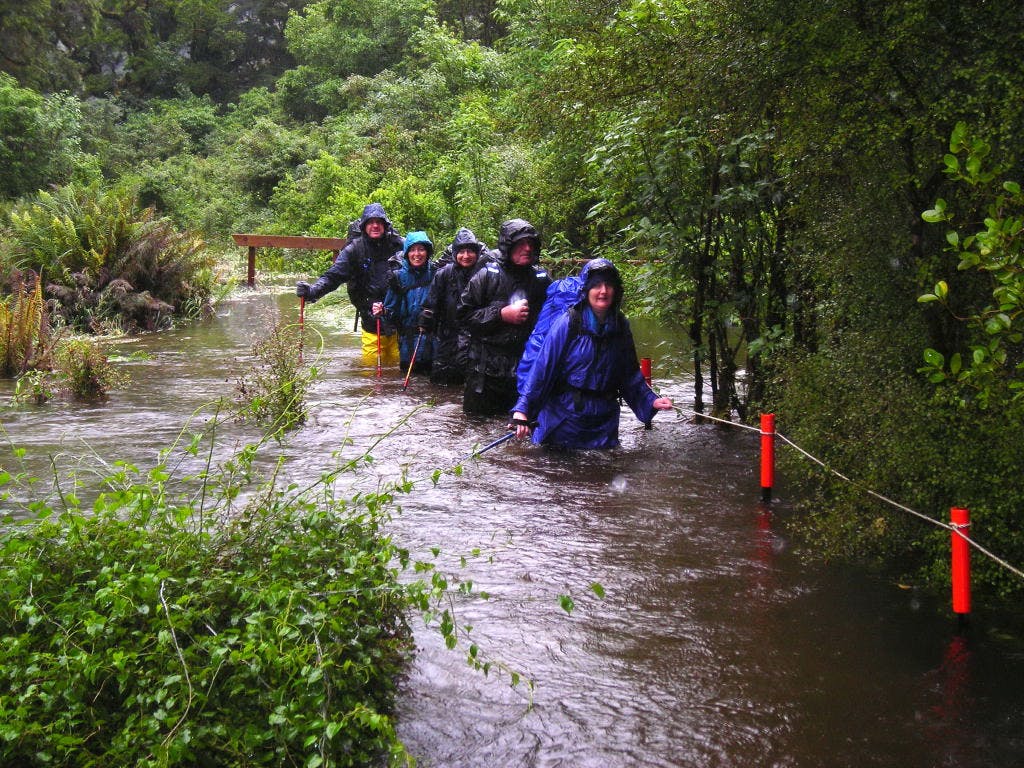 These are the lucky ones – their Great Walk experience wasn’t cancelled. Photo: DOC

Heavy rain has played havoc with the Great Walk aspirations of dozens of visitors to Fiordland who have planned their holidays around walking the Milford Track.

But the cost is not only measured in the ruined holiday plans of trampers from around the world. Each day the track is closed costs DOC up to $6000 as it refunds the hut fees of those whose Great Walk experience has been cancelled.

The Milford Track, the most popular of the nine Great Walks, was closed on January 1 and 8 due to torrential rainfall that flooded rivers and creeks. Each day 40 walkers begin their Milford Track experience, but when the track is unexpectedly closed, no-one can walk the track and the bookings of those due to start the walk are cancelled. With the track fully booked months in advance, rebooking is not an option for most and some trampers get upset at not being able to fulfil their plans.

“Some of [the affected trampers] are very accepting because they can see what the weather is doing outside and can understand what is going on,” said Annie Wallace, DOC’s programme manager for visitor assets. “But on January 8 there were quite a few tears because people have planned a whole holiday around walking the Milford Track and they’ve had their booking for six or eight months.”

DOC refunds the money of those whose trip is cancelled. The two January closures combined cost the department between $10,000 and $12,000 in lost hut fees. “The income we get from the track goes back into the coffers and helps us to man the track and do the maintenance work and all the other support we need to provide to keep the tracks – the Milford and all the other Great Walks – open,” said Wallace.

Having two track closures so close together, particularly as the 2011/2012 season saw no closures, was unusual, Wallace said. “I would say it’s unusual for us to have two such big storm events so close together, within the first eight days of the year, but it’s not unheard of. The weather and the environment in Fiordland are so dynamic we can get this sort of thing happening at any time of the year.”

During the storm event on January 1, 22mm/hr of rain fell – the heaviest rain event for 12 months. The January 8 storm recorded 18mm/hr of rainfall. Despite the lower rainfall, the January 8 event has caused more damage to track facilities. Several bridges have been damaged with one buried by rocks swept down creeks, another has been swept off its piles and a third bridge no longer connects to the creek bank which has been washed away.

Wallace said these issues would need to be resolved in the next few days.

Wallace suggested those planning to book a trip on the busy Great Walks also buy insurance to cover any additional costs they may face should their time on the track be cancelled.

Taking the search out of Search and Rescue 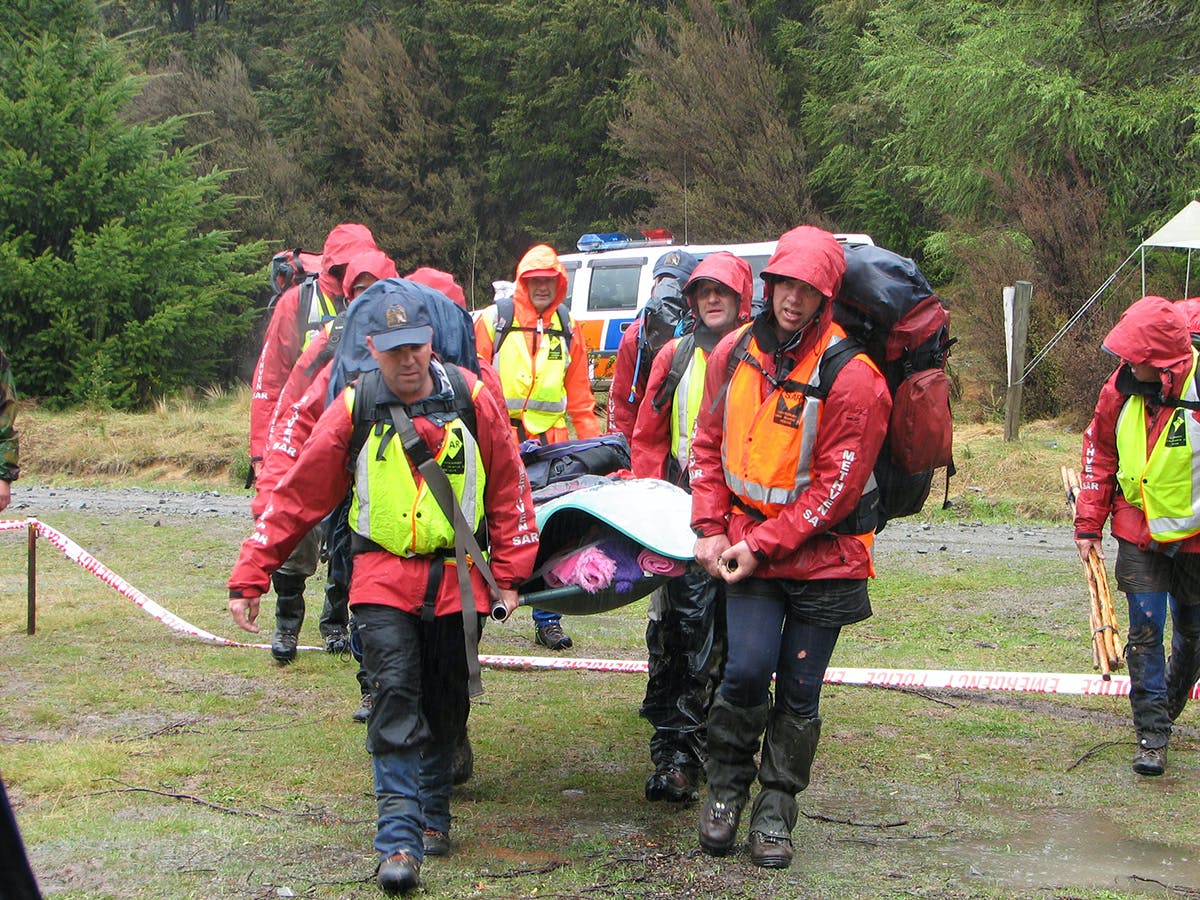 PLBs turn a search and rescue operation into a simple rescue. Photo: Supplied

When is it OK to activate a personal locator beacon?

According to the Rescue Coordination Centre in Wellington, it’s a tough question only those who press the button can answer.

This summer has already seen several land-based search and rescue operations. One search for a tramper in Kahurangi National Park was called off after several days without locating the missing man. Another search for a runner in Tararua Forest Park lasted two days and involved 10 search teams before the missing man was discovered.

By comparison, a person suffering blisters and dehydration and a trio of trampers who went for a night stroll after reaching Karamea Hut in Kahurangi National Park and became lost both summoned help by activating their PLBs.

While these examples are at opposite ends of the spectrum – people seriously lost and in need of help versus panicky trampers who could possibly do with sitting down, having a drink and thinking about their plight before rashly calling in emergency services – Rescue Coordination Centre spokesperson Steve Rendle said they highlight the benefit of having a personal locator beacon.

“They are absolutely an essential piece of kit for trampers and they save an enormous amount of time,” he said. “There have been a number of incidents over the Christmas and New Year period where people have not had them and the situation would have been different if they had.

“They take the search out of search and rescue, really.”

The RCC was compiling figures on the number of beacon activations in 2012 at time of publishing, but Rendle said the “feeling is there has been increase, particularly in the land based ones, the PLBs.”

The number of PLBs registered with the Rescue Coordination Centre in January 2013 was nearly 6000 more than the same time in 2012. There are now 33,500 locator beacons now registered in New Zealand, up from 27,700. This number comprises beacons used on boats, planes and for personal land use. Rendle said an estimated 30 per cent of beacons bought have not been registered, despite this being a legal requirement.

Rendle also said the RCC didn’t feel beacons were being misused. “The feeling is that people are using them generally for the purpose they are designed. They are using them appropriately though occasionally they get used in situations where perhaps an alternative option might have been available.”

However, the RCC is reluctant to criticise those who do activate a beacon in non-emergency situations, such as blistered feet. “We don’t want people to say I shouldn’t use it because it’s not appropriate and then get into trouble,” Rendle said. “If you feel things are getting to a risky stage then they should obviously be activated.”