Bogus DOC signs cause a chuckle

The former president of the Otago University Tramping Club has said bogus DOC signs appearing in huts around Otago and Southland could be the work of one of the club’s own members.

In its October newsletter, Federated Mountain Clubs included photos of two bogus signs and asked its members to report if, when and where they have seen others.

The signs are the standard green and yellow with the department’s official logo, but their messages are politically subversive or just plain silly.

The bogus signs have been showing up since 2009 when a sign asking people walking the Routeburn Track to wear ‘tramping nappies’ was first reported.

‘Please do not defecate in our National Parks,’ the sign stated. ‘Heavy duty tramping nappies are available from all DOC visitor centres free of charge and DOC hut wardens carry an emergency supply. Toilets in conservation areas are strictly for urination only.’

Since then trampers have been finding more bizarre signs around huts in Otago and Southland.

He photographed one at Staircase Hut and entered the picture in the New Zealand Alpine Club’s photography competition.

The photo was put on Facebook and then went viral on the internet. The sign read: ‘Warning! We would have the money to restore this hut if you all stopped voting for that dork John Key.’

Morris said he had no idea that would happen and promises he is not the person behind them.

“I’ve heard some speculation there might be one of our members involved,” he said. “Whoever is doing it is keeping it firmly under their hat and probably for good reason.

“The colours [of the signs] aren’t quite right so they shouldn’t give up their day job.”

The last bogus sign Morris saw was at French Ridge Hut. It stated: ‘Humourless warning signs may decrease your enjoyment of the backcountry.’

DOC media advisor Herb Christophers said he has an idea of “who the culprit is”.

“There’s a guy in OUTC who shall remain unnamed,” Christophers said.

When he saw an image of the sign at Staircase Hut on the internet, Christophers contacted the local area officer and requested him to remove the sign.

“But of course the picture had already been taken and now has a life of its own,” he said. “Having it on the internet has got far more impact than it would ever have just stuck to the side of a hut where only a few people would see it.

“Most people wouldn’t even read the thing because they’d think it’s just another DOC sign.”

Christophers said while the department isn’t too concerned about it, it can’t allow it to keep happening.

“We don’t want them up because it misrepresents the department,” he said. 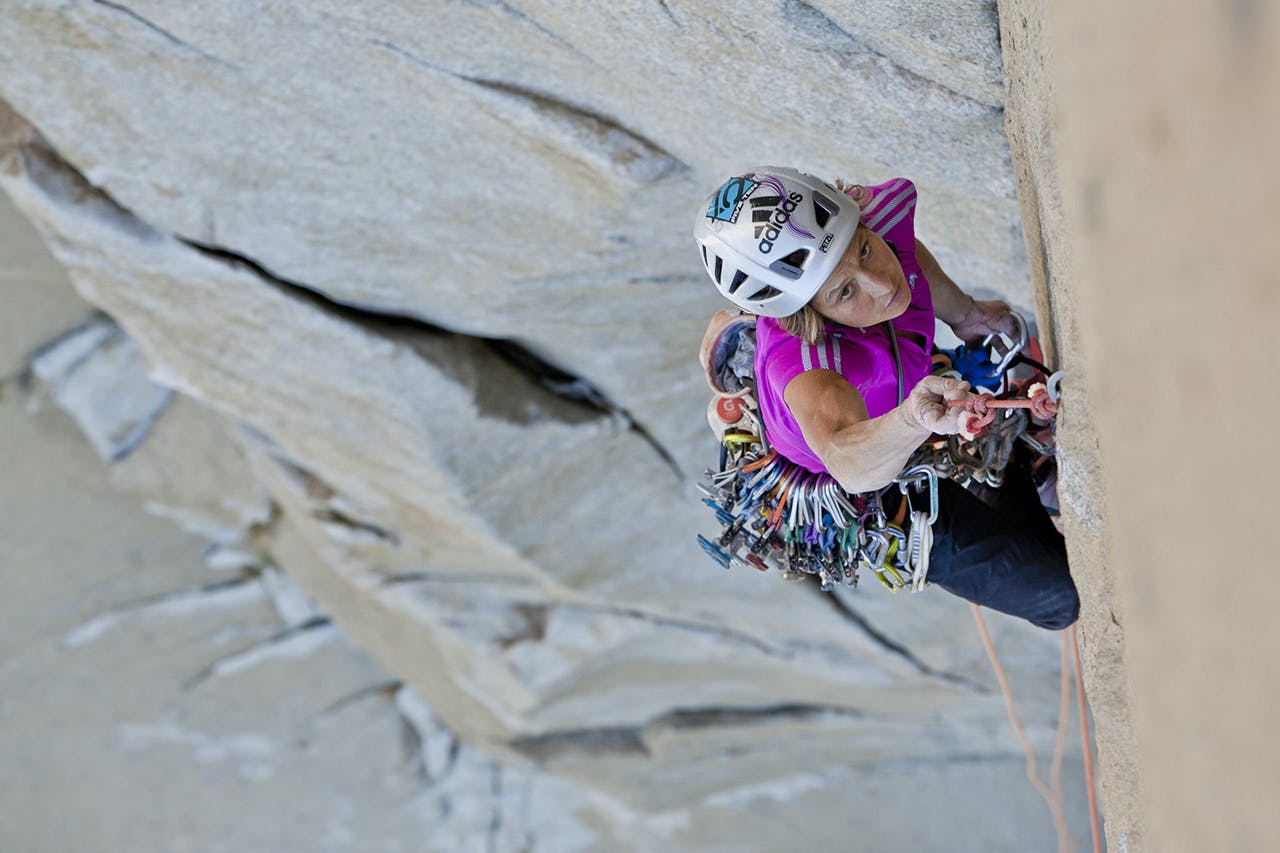 Mayan Smith-Gobat has received a Hillary grant to speed climb El Capitan and the Dome in Yosemite National Park, US. Photo: Supplied

The Sport NZ 2013 Hillary Expedition Grants have been announced.

The Hillary Expedition Grants will help fund Kiwi adventurers in Nepal, Papua New Guinea, Argentina, the USA, Pakistan and New Zealand. The value of grants given range from $4,000 to $20,000 and will be used to help fund the following expeditions:

Sport NZ Chief Executive Peter Miskimmin, who sat on the selection panel, said he hopes the adventures planned will inspire New Zealanders to take on the outdoors.

“Almost 60 years ago Sir Edmund Hillary inspired us as a nation, these grants honour that history,” he said in a written statement. “The adventurers we’re funding on these expeditions are like the high performance athletes of the outdoor sector.

“We are an adventurous and pioneering nation. Kiwis set their sights high and these expeditions are a great example of that. Each person will need to be physically and mentally tough to succeed. They’ll need to plan well, yet be ready to deal with the unexpected. Most of these are world-first challenges and I hope that, like Hillary, these adventurers go on to create their own inspiring stories for other New Zealanders to share.”

Sport NZ introduced the Hillary Expedition Grants scheme in 2002. Objectives of the scheme include encouraging inspirational adventures, inspiring others to challenge themselves in the great outdoors, and reinforcing that New Zealand is a nation of adventurers and achievers.

Bid your way to kiwi sightings 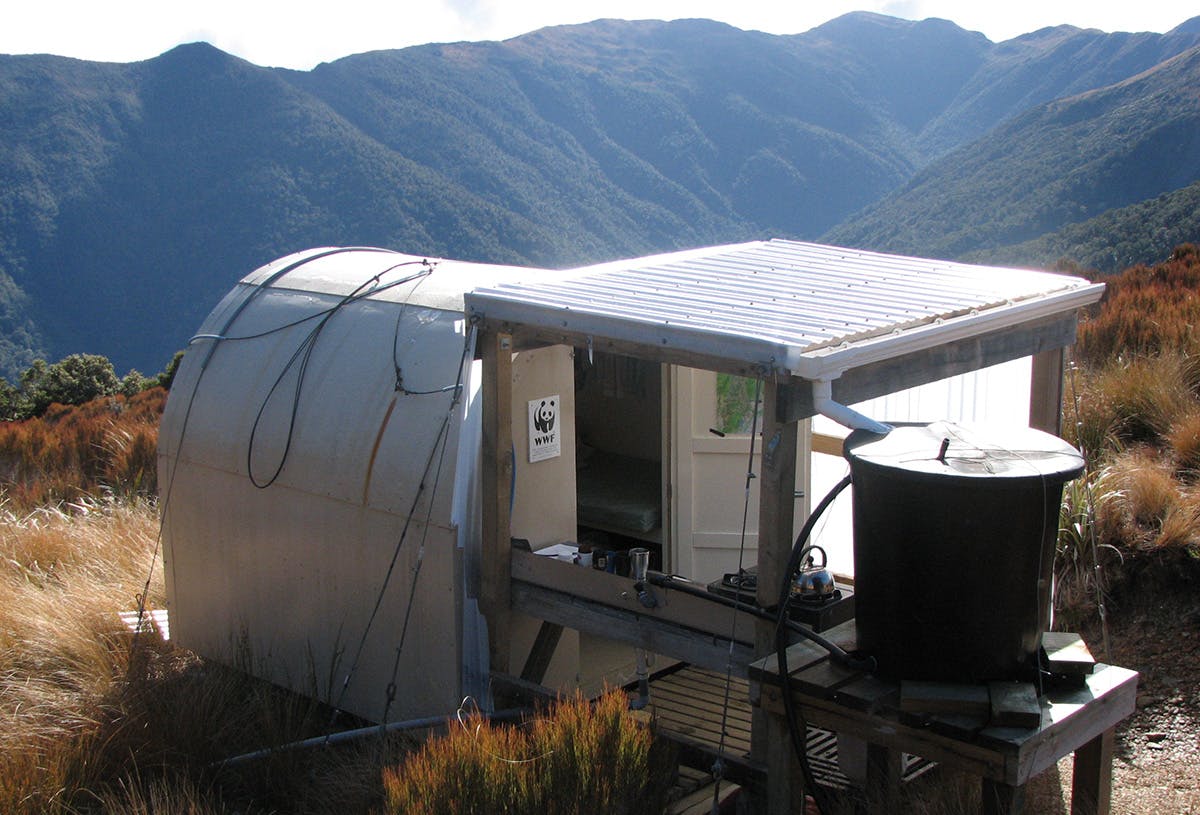 Seeing kiwi in the wild is often a game of chance, but you can now improve your odds by using Trademe to bid your way to success.

For the first time, DOC West Coast has run an auction on Trademe for the opportunity to assist a kiwi ranger in daily work on the Paparoa Range.

DOC Greymouth’s Shaun Burnett said only two days after listing the auction more than 1600 people had viewed it, with seven bidding, raising the see-a-kiwi-stakes to $152.

The winner of the auction will help a kiwi ranger over four days on a variety of tasks, such as assisting with radio telemetry to locate kiwi, listening for and recording kiwi call at night, undertaking an egg lift by helicopter and releasing kiwi chicks into the Bois Gentil Kiwi Crèche forest.

The four days won’t be all hard graft, Burnett said. On the third day the auction winner will get a home cooked meal and stay overnight at Kiwi Wild B&B.

The auction is a trial for DOC Greymouth and Burnett said if it goes well and breaks even he will run more in the future.

“There’s not a lot of money around at the moment, so we’re looking at novel and creative ways of funding the kiwi work our rangers do,” Burnett said.

The auction is one of DOC Greymouth’s first steps to using social media to promote its activities, engage with the public and extend its reach beyond the West Coast.

The office also created a Facebook page in December.

“Just by looking at the auction, people learn more about what DOC is doing,” says Burnett. “People know DOC exists, but many aren’t sure what it is we actually do. The West Coast doesn’t have a big population and social media allows us to reach out to people beyond our boundaries to let them know what we’re doing and how they can get involved.”

Burnett said over the last six months DOC head office had been driving a new social media strategy, encouraging local offices to take advantage of the internet’s potential and to find creative ways of using it to fund activities and to engage with community groups.

“It’s not just about funding,” Burnett said. “A lot of work can get done through the passion of different community groups and the internet can help us to connect to them.

“We appreciate the way it lets us have two-way communication as it makes us a little more available.”

Burnett said other DOC centres will most likely develop social media profiles and activities over the next year. 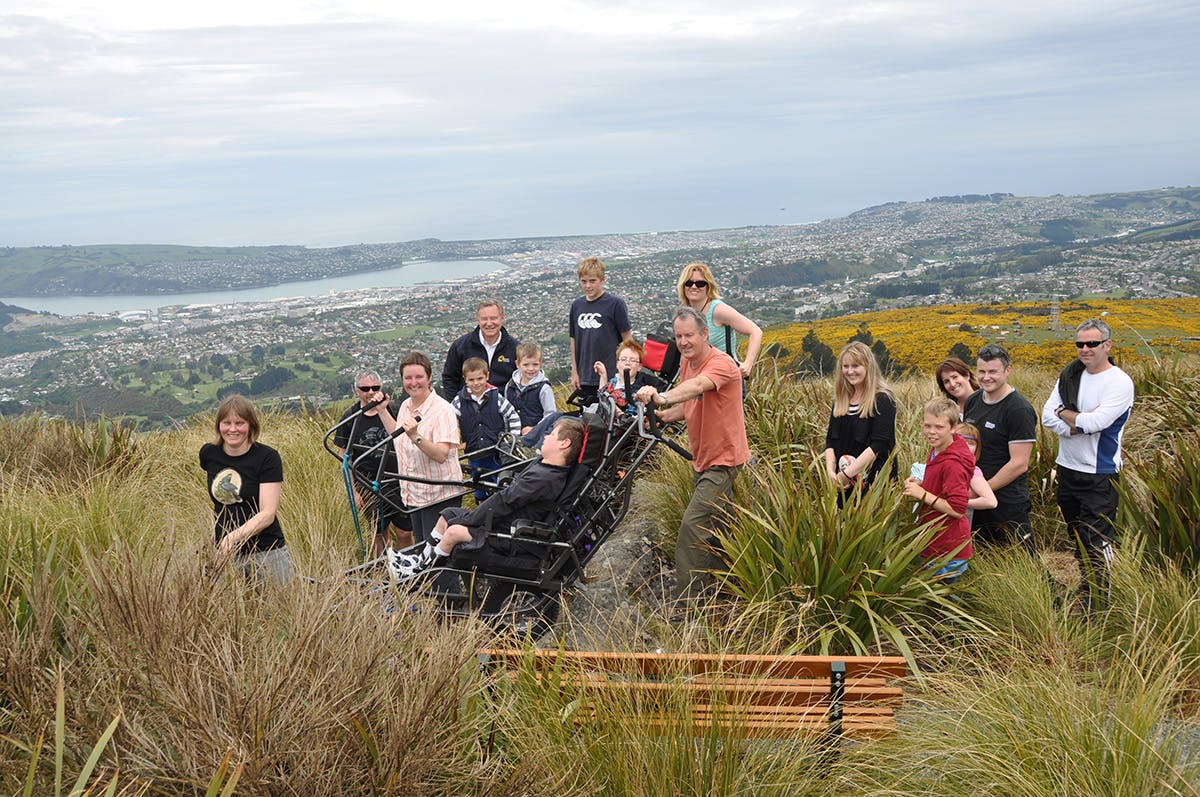 Callum Flett, Finn Casey and a crowd of supporters take in the view from Flagstaff. Photo: Barb Gee

New Zealand’s first Trailriders – described as a cross between a wheelbarrow and a rickshaw – had their first outing near Dunedin recently.

Designed to give disabled people better access to the outdoors, they have a single large tyre, full suspension and disc brakes. Riders Callum Flett and Finn Casey enjoyed the 20 minute ascent to Flagstaff – at 668m one of Dunedin’s best vantage points – and their families are already talking about tackling the Routeburn and Kepler Tracks.

The Trailriders, which have been imported from Canada at a cost of $10,000 each, have had a lot of attention paid to ergonomic features, both for the riders and the team of ‘sherpas’ that provide the motive power. Two people were sufficient to get each Trailrider up and down Flagstaff, but a bigger crew would be needed on more challenging terrain or when overnight gear needs to be carried. 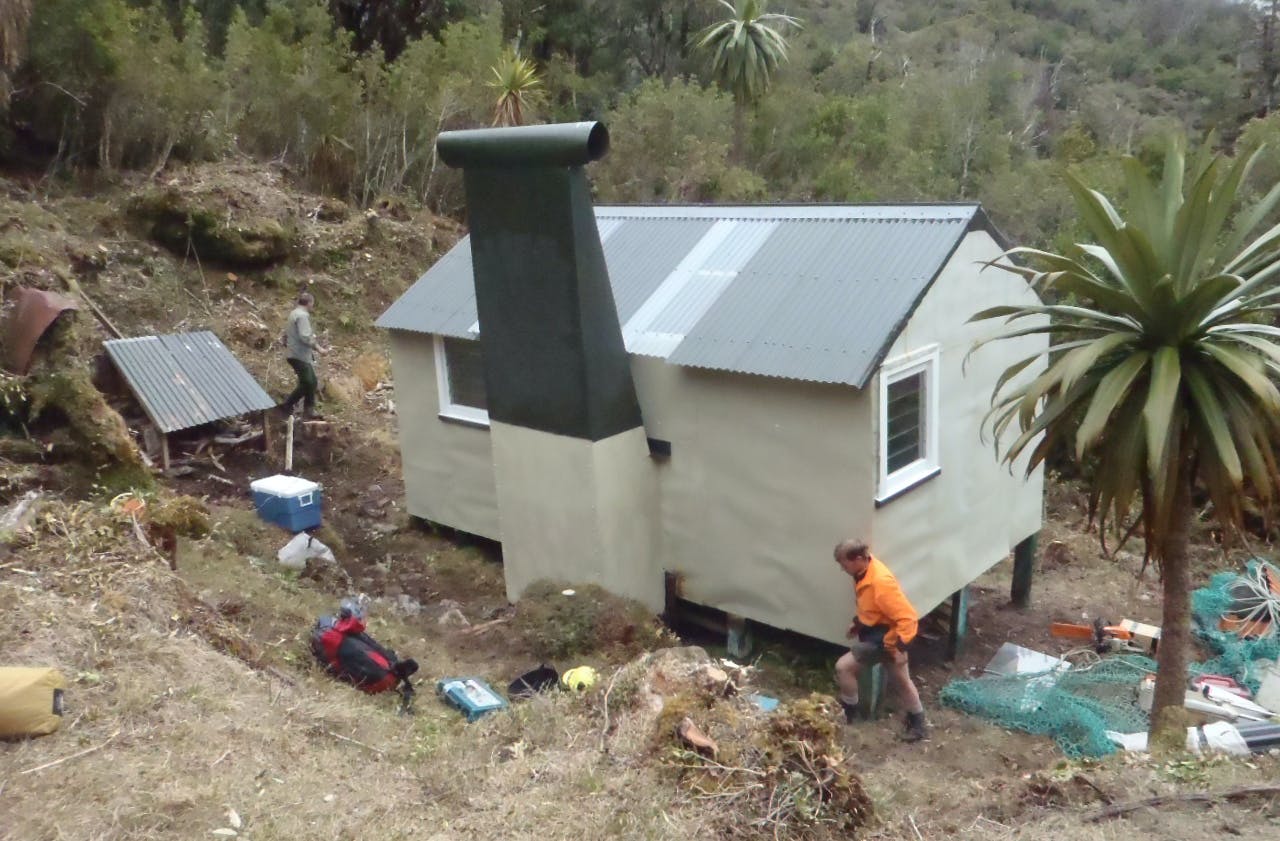 DOC Greymouth visitor assets ranger Jock Edmondson said he had conducted an inspection of the minimal maintenance hut in March this year and found the roof was leaking and decided to repair it before the year was out.

Staff replaced the ridging, the skylight, treated the timber under the ridging, made repairs to the fireplace and chimney, gave it a lick of paint, a thorough clean and removed rubbish from under and around the hut.

Edmondson said there is no formal track to reach Cone Creek Hut and few people visit it, but those that do enjoy the adventure of getting there and the peace and quiet.

“It was a very satisfying job getting into a remote hut and extending its life,” Edmondson said. “It gave us a bit of a high knowing we’d done something for the backcountry because often our work is focused on the front country.”