Scott Gilkison, a leading Otago climber and explorer, was born 100 years ago. Wilderness invited Bruce Gilkison to write about his father’s life and times

There were some early signs of what Scott Gilkison would be – a climber, explorer, conservationist and writer.
At the age of 10, in 1922, he was so inspired by a trip in the Routeburn area that he burst into print with a story about it, published in full and unchanged by the local newspaper.

But it was on a climb in the Earnslaw region a few years later that he saw his future. Even today his description is tantalising: ‘… a moment I will always rank as one of the most sublime of my climbing experience… the mighty array of glistening icefields… almost all the peaks being then completely unknown, unclimbed and unmapped…’.
He’d just spent a season in the Aoraki/Mt Cook region. But much of that area had already been explored. It was the mountains of Otago and Fiordland, with verdant valleys, bush-clad slopes – the lure of the unknown – that were enticing. Scott and others that he met there would climb, explore, treasure and write about them. Eventually they would help to protect them. 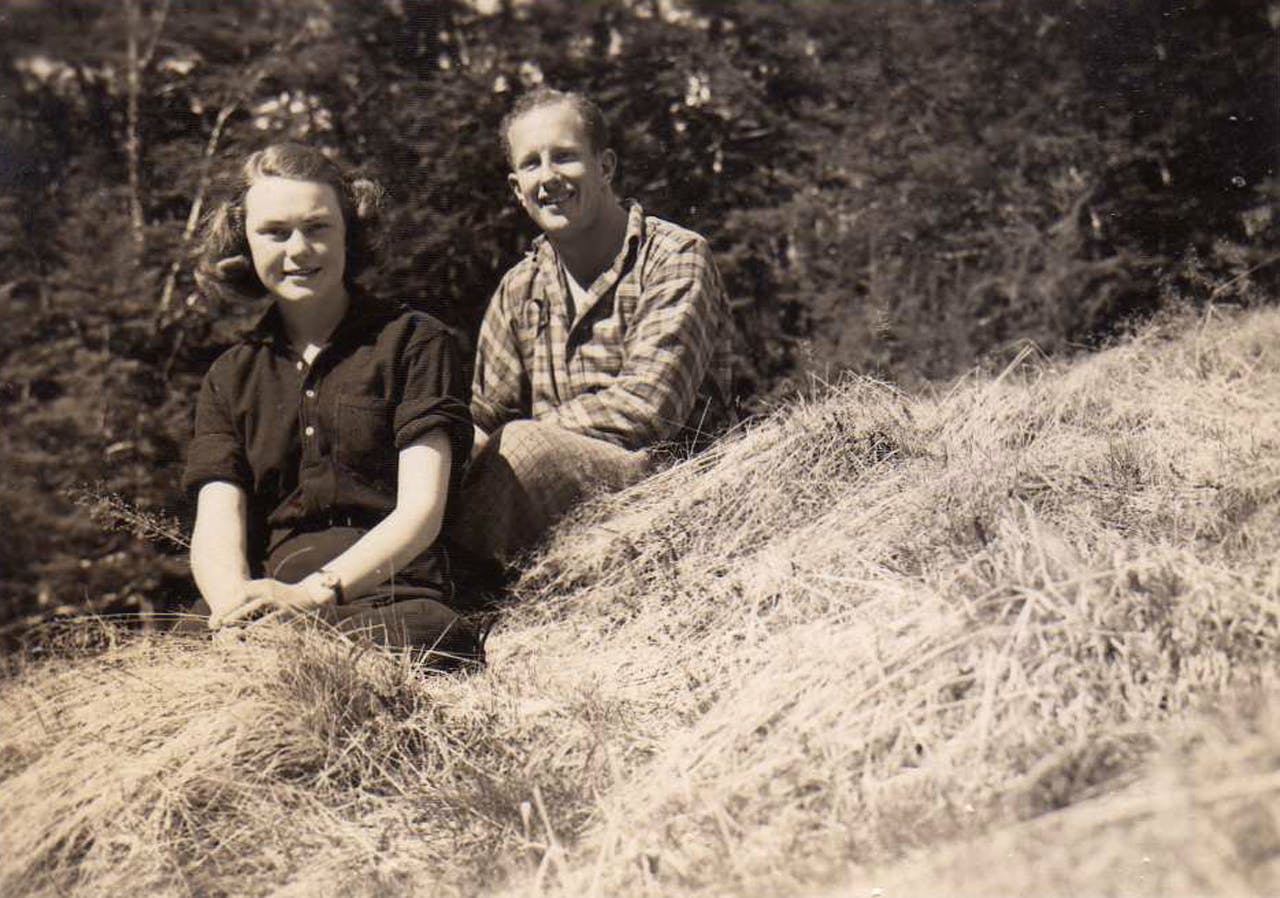 A hundred years after his birth, and 90 since his first visit, I am back in the area that so inspired my father. I have been climbing and, with 300 others, running in the Routeburn Classic. The mountains are as stunning as ever. It is easy to imagine the thrill my father must have felt at seeing, them decades earlier, almost unknown.
About 1930, when Scott started climbing, mountaineering in New Zealand was coming of age. Arthur Harper had helped found the NZ Alpine Club in 1891 and was still leading it four decades later. The club had been modelled loosely on the Alpine Club of England where, he noted, climbers were gentlemen who thought it beneath them to carry their own rucksacks. But Harper understood that climbing was an egalitarian sport in New Zealand and it was ‘quite natural for climbers to carry their own swags’.
They were mostly unguided amateurs, and more likely to be workers. Hardships were to be relished, not avoided. This new spirit flourished in the south.

The Otago Section of the NZ Alpine Club (OSONZAC) was formed in 1930 and quickly became the club’s strongest. Its 1931 camp in the Rees Valley set a trend: members would gather in a little-known area, and would plan, climb, explore and converge again to share ideas and stories, to argue and inspire. Over the years they drew maps, made tracks, built huts and encouraged newcomers. In such a place, my father met kindred spirits.

In a period of Depression between World Wars, with uncertainty everywhere, the mountains offered friendship and a sense of identity, attachment to a unique landscape, where fitness and character mattered most. They also offered adventure close by, at minimal cost.

Opportunities and challenges abounded. Scott’s journeys included at least 16 first ascents and many other firsts, such as a grand traverse of Earnslaw. On one trip his boots collapsed and he left at daybreak to tramp out to Paradise to order replacements. He returned that evening, arriving at 1am ready to sleep but found his party about to leave for a climb. He joined the group, reaching a virgin summit at 6am after 65km of travel on tough terrain, in darkness and broken boots.

Plans for an extended trip in Aspiring country in 1933 led to a different ‘first’: an airdrop of food and equipment. The plan was fine, the weather wasn’t and the event became a disaster. Parachute and packages parted company, the food parcel exploded on landing, and the equipment was never found. The party was left without ropes or tent, sheltering from rain for days under rocks and bits of parachute, scraping bully beef and jam from rocks and grains of rice from the glacier. The names ‘Aeroplane Peak’ and ‘Parachute Col’ survived intact. 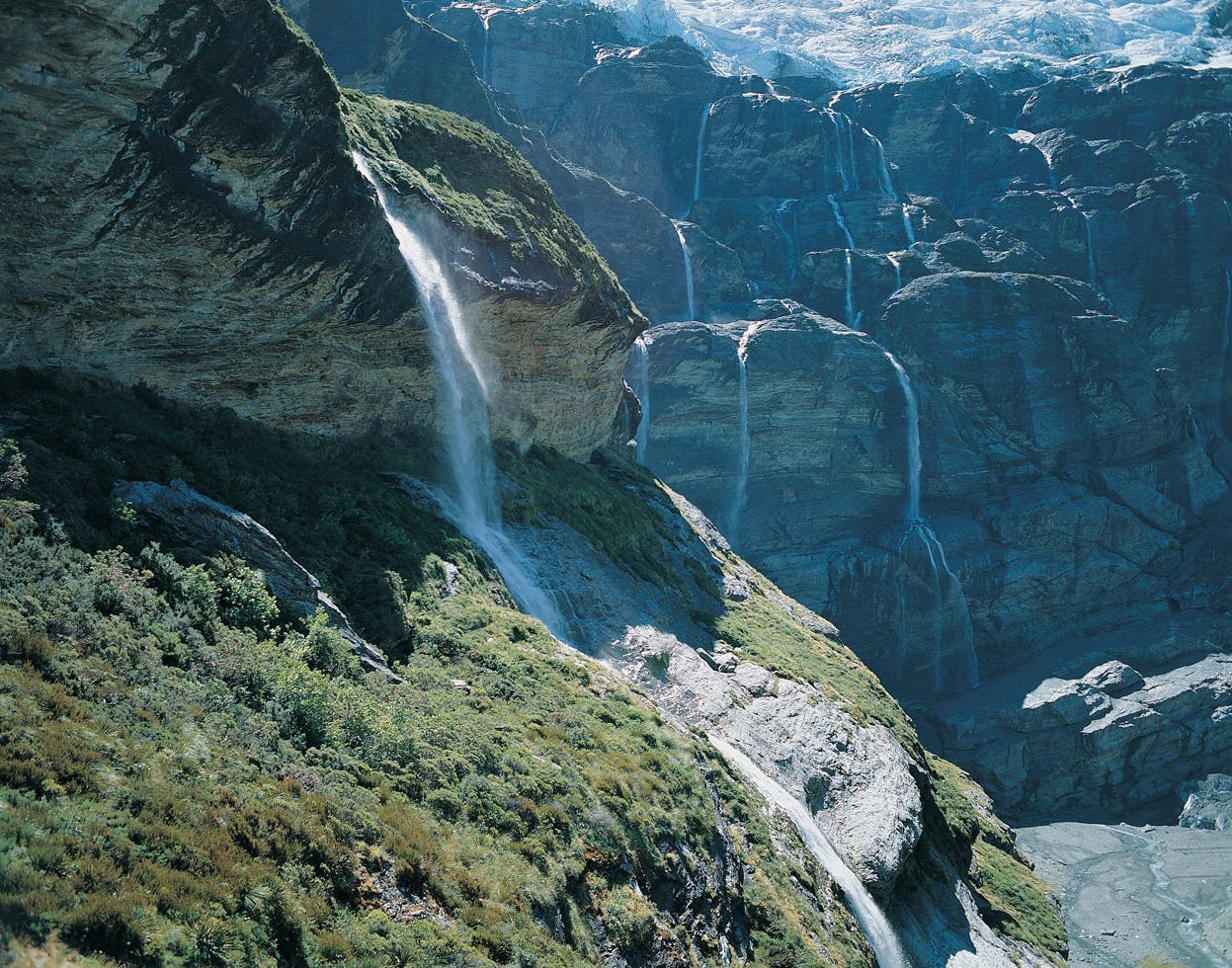 In 1940, then 27, Scott was concerned that climbing stories would be lost in the war years, so he wrote Peaks, Packs and Mountain Tracks. In his introduction he wrote: ‘It may be that some of us have climbed our last peak in the Southern Alps, and that peace will come to find our numbers sadly depleted. It is largely due to this that the preparation of the present volume has been pushed ahead… that some of the thoughts and personal memories of at least one Otago climber might be set on record.’

Later, with Arthur Hamilton, he wrote and edited Moir’s Guide Book in 1948 and again in 1950. These were expanded updates of George Moir’s 1925 classic guide and sold an impressive 5000 copies. Books on Otago’s highest peaks, Aspiring and Earnslaw, would follow.There were life-long friendships from those early years. When I was three, Scott almost died of polio and OSONZAC friends offered to care for me until the danger passed. Polio is highly contagious and if I had caught it I would be a hazard to their family, too. But they were climbing friends and had taken risks for each other before; this was just one more.

A family bach at Lake Hawea became a refuge for climbers, especially when the weather turned bad in the mountains. At times, nearby derelict buildings were commandeered for extra sleeping space.

Scott usually slept outside at Hawea, partly so he could get up early and climb something without waking anyone. But his enthusiasm extended to food – rising early also meant he could have two breakfasts.

His early explorations put his name on the map. Gilkison Falls are a stunning sight at the head of the Earnslaw Burn, and a delightful overnight trip. Scotts Rock Bivvy, in the West Matukituki, is less grand but functional. And a few kilometres away, the OSONZAC Twins were named to honour a remarkable team of Otago climbers.

It was natural that the OSONZACs would want to protect this Otago wonderland, and they proposed a national park in 1936. The campaign would take almost three decades, and their intimate knowledge of the area would be crucial. Mount Aspiring National Park was finally established in 1964.

Scott was president of the NZ Alpine Club at the time (1963-65, immediately before Sir Ed). A fellow campaigner said he ‘added stature to that high office’, using it effectively to play a leading role in the final push for the park. Subsequently, he edited the Handbook to the Mount Aspiring National Park, and served on the National Park Board from its formation until his death in 1976. His final act, when ill with cancer, was to extract a promise from the National Parks Authority for additional reserves in the Matukituki Valley.

The NZ Alpine Journal editor said of Scott: ‘…among a galaxy of new mountaineering talent none has followed his star with greater determination… nor has anyone better deserved the successes….’ 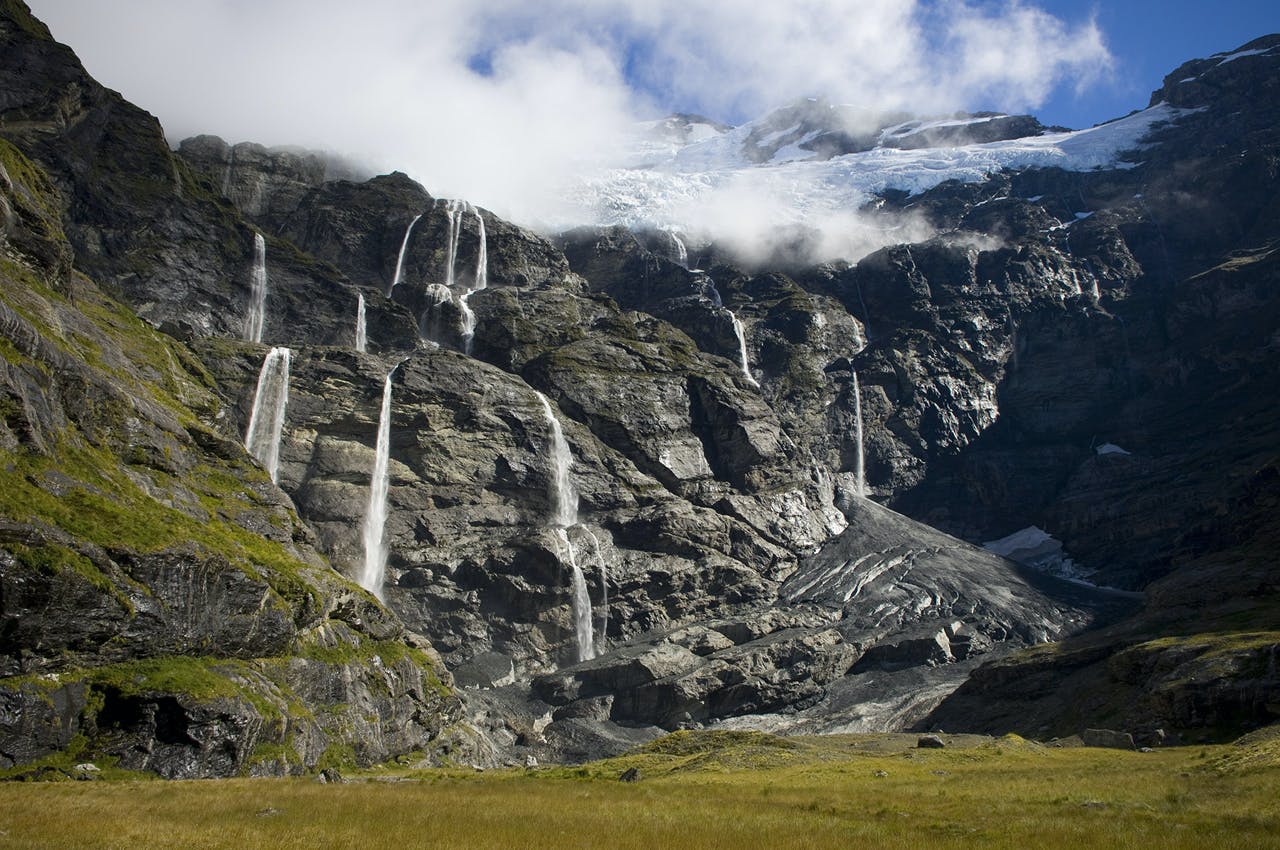 Scott did not consider himself a great climber though. He referred to his ‘natural mediocrity’, and would probably make similar claims for his abilities in exploration, writing and conservation. The key ingredient was passion, shared and never lost: ‘In performance I can never rise high, but in enthusiasm and appreciation I take second place to none.’

While others disliked carrying a heavy load, for him ‘…the actual work of pack-carrying is so closely bound up with the pleasure and delights associated with it, that I cannot define in any way the point where tribulation ends and enjoyment begins.’

None of his successes were ‘solo’ – they happened in teams, the OSONZACs and others, with wonderful spirit. And the mountains and valleys of Otago and Fiordland provided a sublime setting. Similar stories could be told about others. Scott’s story is a tribute: to that land, to those teams, and to that spirit.

His final act was to extract a promise from the National Parks Authority for additional reserves in the Matukituki Valley.

With shrinking snow and icefields, it is sometimes said that New Zealand mountains are getting harder to climb. But what was climbing like in the 1930s?

Huts and tracks were rare and knowledge of routes and weather was often limited to one’s own observations.

For a climbing trip in the Earnslaw area with no maps available, Scott went in two weeks early, photographed possible routes, tramped out to send the film to Dunedin for developing, then went back to the mountains and out again a week later to collect the photos, so when his partners arrived they could plan the trip.

Equipment was basic, heavy and often home-made. In Moir’s Guide Book, he describes how to make your own rucksack, parka, and sleeping bag, how to nail your boots and to tramp at night by candle-light. Ropes were hemp and sucked up water. Front-point crampons, light-weight tents and sleeping pads came later. 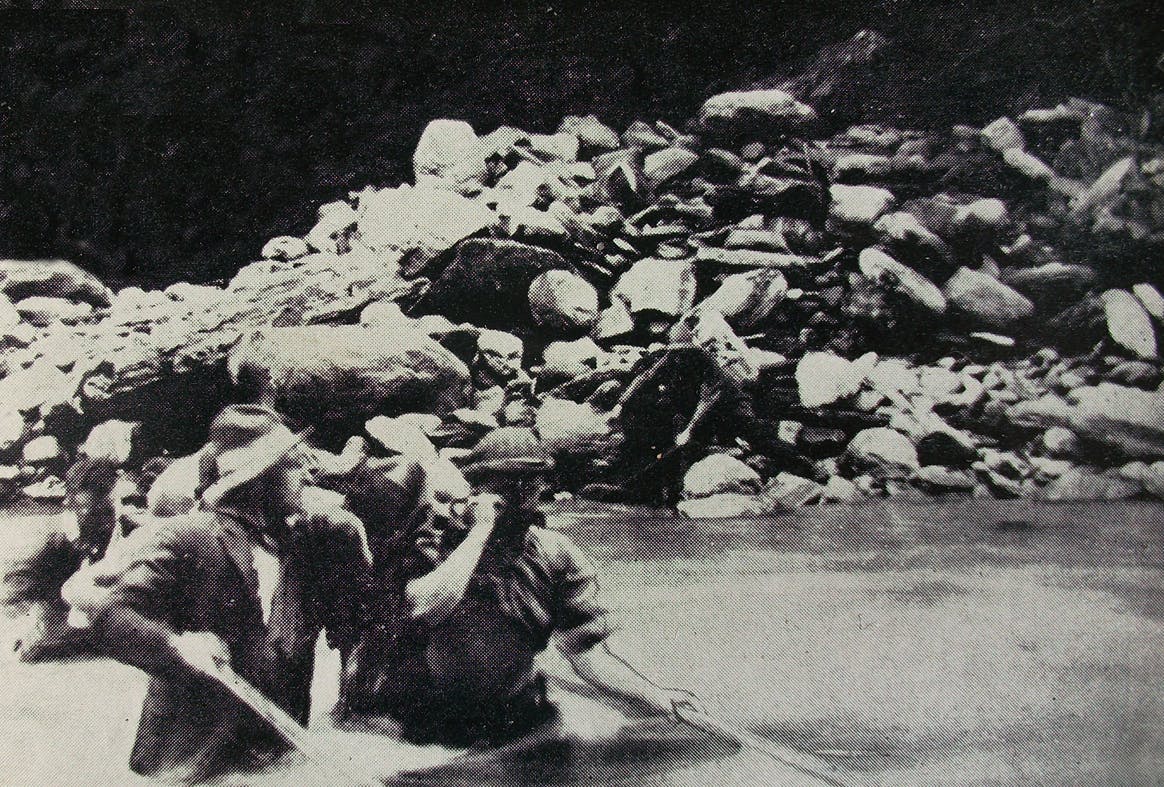 In good conditions on Mt Aspiring today, an injured climber with a personal locator beacon could be safely in hospital within a few hours . In February 1932 when a party of five was descending Glacier Dome, it was a very different story.

Day 2: Three climbers get food, clothing, tent fly and poles from base camp. Patient moved to a better site, using stretcher made from fly and poles.

Day 8: Stretcher carried over high bluffs and narrow bush trails. Four bearers, supported by others with ropes. Out of bush after dark, then dray and horses to Aspiring homestead.