Read more from the
February 2020 Issue

Read more from the
February 2020 Issue

Park Pass Glacier is one of those special places that you’d expect would take days of difficult and arduous tramping to reach.

The glacier cascades spectacularly from its high neve into a turquoise-blue alpine lake. The barren schist landscape is both beautiful and stark and the dramatic views stretch across limitless valleys into the heart of the Darran Mountains. It looks like a remote wilderness setting, yet it is only a day and a half of relatively easy walking to get here.

The glacier is mostly visited as a side excursion by those walking the popular Five Passes route, but it is most definitely a destination in its own right and is well worth the extra effort to take camping gear so you can spend a night or two there.

The trip starts at the Routeburn Road end but leaves the Routeburn Track after a short time and climbs steeply to Sugar Loaf Pass, where it descends, again steeply, into the Rockburn Valley.

A good marked track up the Rockburn leads to Theatre Flat and the tussock flats of the upper valley. Park Pass is at 1176m, with a large tarn and a rock bivvy.

From Park Pass, there is no marked track up to the glacier, but the route ascends the obvious tussock slopes on the east of the pass.

While maps show a couple of bluff sections, there is indeed an easy way through, with a defined track in some places and the odd cairn to follow.

This leads to a shallow valley, with incredible schist slabs and alpine herb-fields, which you follow up to an extensive area of bedrock and moraine hillocks.

Even if this is as far as you go, you will be rewarded with stunning views of the glacier, the terminal lake and the peaks beyond.

We continued down to the outlet of the terminal lake where we pitched our tent on moraine beside extensive ice-polished slabs running into the lake, which provided a perfect launching ramp for a swim.

The views from our campsite were impressive. In one direction, Mts Tutuko and Madeline rose majestically above the deep shadows of the Hollyford Valley. Looking the other way, the glacier plunged from the high peaks of Poseidon and Sarpedon and turned a gorgeous shade of orange at sunset.

The lake’s outlet is spectacular and crossing here requires care as the stream runs across smooth schist and then plummets 500m to the Rockburn Valley. 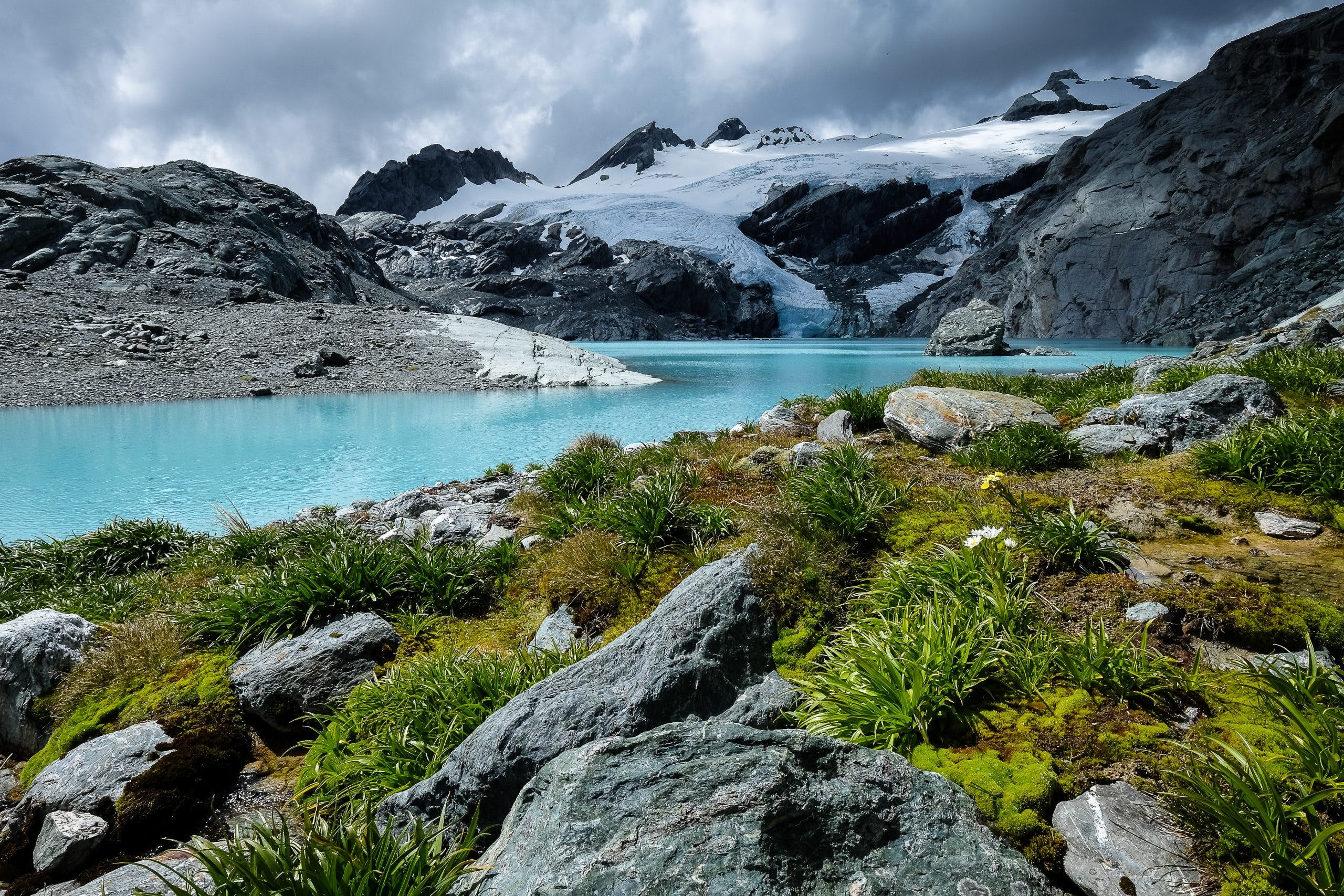 Alpine flowers on the shore of the glacier's lake. Photo: Jo Stilwell[/caption]

We visited in early January when the alpine plants were a treat with buttercups, snow marguerites, edelweiss, daisies and various cushion plants all in flower.

Looking at historical photographs, Park Pass Glacier was in a much healthier state just five years ago and its future is likely to be one of on-going retreat – it would be prudent to visit sooner rather than later. Be aware that this area is close to one of the flight paths from Queenstown to Milford Sound and there is regular aircraft noise. There was also some helicopter activity around the glacier. This might annoy some people but we were so enraptured by the beauty of the place that we weren’t bothered.

This is one of the most spectacular sites we have ever camped at and we spent two days here exploring and enjoying the location.