GPX File
Around the Mountain Circuit (gpx, yo )
Your device does not support GPX files. Please try a different device.

This circumnavigation of Mt Egmont/Taranaki has a bit of everything, from stream crossings to a waterfall, native forest to alpine tussock, solitude and unbeatable views.

Our family adventure began from the North Egmont Visitor Centre and we walked in a clockwise direction. It was full-on from the moment we left the visitor centre as we headed straight up the North Egmont Summit Track and then the infamous Puffer. By the time we reached Tahurangi Lodge, 90-minutes later, we were ready for a rest.

From the lodge, the trail gradually descends towards Manganui Ski Field and, above the bushline and walking through tussock, we were treated with fantastic views of the surrounding countryside the whole way.

From the ski field, we walked the cool Manganui Gorge Track and then through a tunnel before the trail dropped to Dawson Falls Visitor Centre. Our first long day ended after climbing to Kapuni Lodge, a private hut owned by the Mount Egmont Alpine Club. We chose to stay at the lodge because it gave us a head start on our long walk the next day.

I was nervous about our second day because it was said to be the longest and toughest. My apprehension was well-founded as we headed into the wild west side of the park.

There were stairs from the lodge to where the Upper Lake Dive Track branched left. Then it was up and down the tussock slopes, dodging hidden holes in the trail while trying to find relief from the wind behind boulders.

From the Lake Dive Track, we joined the Brames Falls Route where the trail skirts along the base of cliffs and up and down over slippery, moss-covered boulders. The rough trail and isolation made us feel like we were in the middle of nowhere. 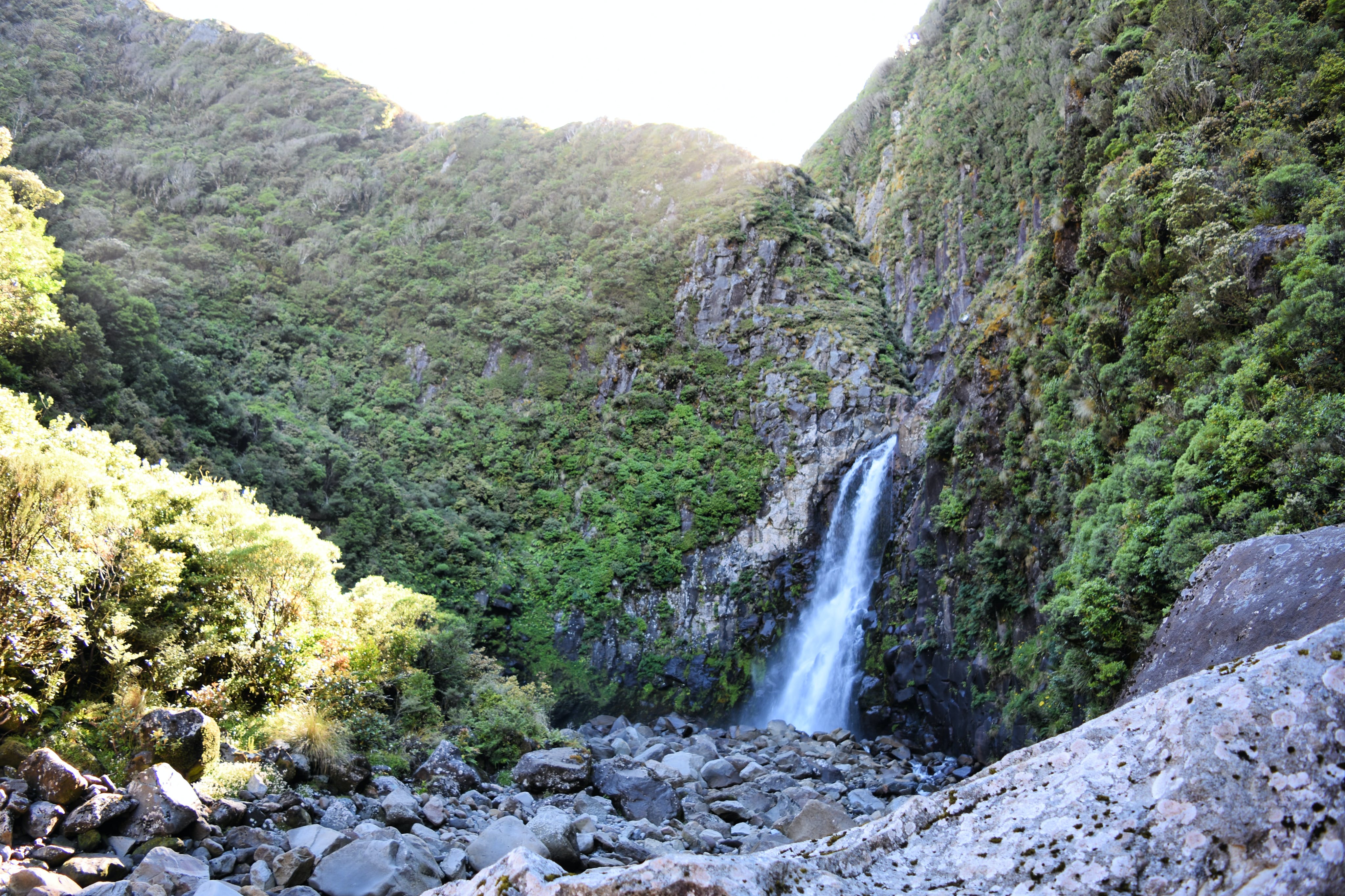 Bell Falls – a highlight of the circuit. Photo: Karen Danenhauer

After a long descent into the forest, the calf-deep Waiaua River is crossed before arriving at Waiaua Gorge Hut. We had it to ourselves that night and ate our meals as we watched the colours of the sunset on the peak through the window.

Next day, it took four hours to reach Kahui Hut on a pleasant track through  native forest, over bridges, up ladders and across a couple of streams. Kahui is tiny, with only six bunks, and filled   up when another group arrived that evening.

On our fourth day, we descended from Kahui Hut to Stony River. The going along this section is slow and includes many stream crossings. At the head of the river, we set our packs down and took the short side trail to Bells Falls, which is regarded by some as the best waterfall in the park. The falls are a stunning and powerful feature and certainly a highlight of the track.

Then, it’s a climb up out of the valley to a full Holly Hut, which overlooks Ahukawakawa Swamp.

It was an easy walk on the final day along the Holly Hut Track to Kokowai Track. A huge slip has closed the track between here and North Egmont (it is expected to reopen this summer), so we descended Kokowai Track into the forest. At its end is a swingbridge over the Waiwhakaiho River and from there it’s a nearly 2km road walk back to the visitor centre to complete the circuit of the mountain.