Read more from the
November 2019 Issue

Read more from the
November 2019 Issue

A night with a guardian

Since Guy Mannering and A. P. Harper first crossed Ball Pass in January 1890, it has become one of the better-known spots in the Southern Alps.

We set off from the Whitehorse car park in calm weather and soon realised that our choice to go west to east was a good one. Doing it this way had us nice and cool until midday in the shadow of the Mount Cook Range directly above. We would also later discover that the steepest sections of the route are on the western side – easier to ascend than descend.

The first section is along the Hooker Valley Track, until reaching a sign indicating Ball Pass to the right and Hooker Lake straight ahead. From there, we began a gradual ascent of the moraine, with ever more expansive views emerging across Hooker Lake and up the glacier to Aoraki/Mt Cook. After about three hours, we reached the grassy flats of east Hooker Valley camping area, perched above the terminal moraine.

Despite the notoriety of Ball Pass (or perhaps because of it), route finding is no piece of cake. We wandered around scratching our heads for half an hour before spotting a solitary cairn, hidden in a sea of rock at the base of a steep chute. Up we went – initially scree, then 300m of steep snow. Near the top the chute narrowed to a choke stone that I imagine could be a challenge in winter conditions, especially if descending.

A little above that, at about 1600m, a large rocky plain called the Playing Field came into view, with Mt Mabel looming overhead. Here, again, route-finding demanded care. The key is to remember to keep left (north). A zigzag trail leads up about 100m to Mabel’s north-west ridge crest which, once we rounded, gave us our first view of Ball Pass.

To gain the pass required a sometimes exposed rocky traverse around Mt Rosa to a snowfield, which we joined at about 1800m. This went up in a north-easterly direction to the pass, though the last 30m were on steep slippery gravel. 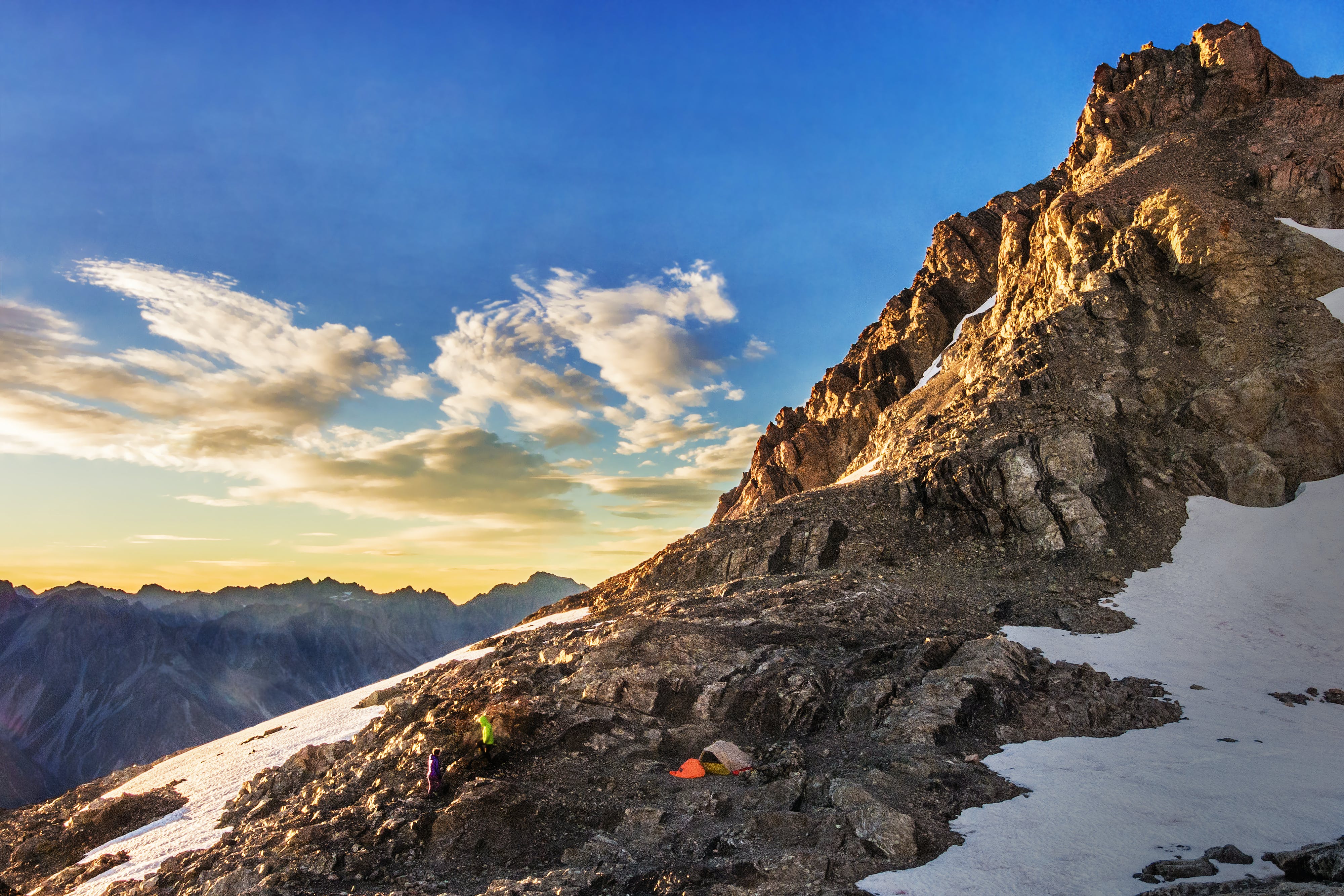 On the pass at 2121m, we knew we were in big mountain country. For the first time, Aoraki’s magnificent Caroline Face came into view and, beyond that to the east, unfolded the Tasman Glacier and a multitude of peaks.
By the time we reached our campsite, across a snowfield skirting Ball Glacier, about 70m below the pass, we had been moving for eight hours.

Two nice flat areas have been carved out in a sheltered spot, protected by low stone walls, commanding unbeatable sunrise and sunset views.

Directly above camp to the south loomed a craggy high point of Kaitiaki Peak. Next morning, we enjoyed an easy scramble on to the peak’s 2222m summit – the highest point on the Mount Cook Range to the south of Ball Pass, bringing views to another magnitude of fabulousness.

Kaitiaki translates as trustee, or guardian, which perhaps makes the peak the guardian of Ball Pass.

The section from Ball Ridge towards Caroline Hut is not as steep as parts of the western side, much of the ridge is exposed and crumbling with lots of undulations and sub-ridges to lead people astray.

It took about two hours to reach Caroline Hut at 1800m, where we gratefully restocked our water supplies. From there, we scrambled to the main ridge and after another two hours we reached Ball Hut. Beyond the hut was another 8km of gradual descent down the old Ball Hut Road. Luckily, our friend Pip was willing to collect us and, with still a couple of kilometres to go to the car park, her Subaru Forester appeared around a corner.