Time
The abbreviated version of the traverse from the ski field to Two Mile Creek is a solid two day walk. Plan on three to four days to get to Kingston

Access
Though the route could be completed from either direction, the logical way to go is north to south. From The Remarkables Ski Field head to Lake Alta and follow the path of least resistance from there.

Every day I look from my living room window the ridge taunts me, almost daring me to get up there and tangle amongst its jagged ridgeline. A life lived in Queenstown is a mix of dodging tourists and trying to live up to the surroundings that envelop the town. The Remarkables sit above Lake Wakatipu like the crown on a queen, forming the backdrop to an adventure dream.

I’ve climbed the Remarkables, I’ve skied on them, I’ve hiked in their shadow and I’ve stared at them for years. The idea of traversing the range wasn’t mine, but the moment I heard it I was in. Adrian, a frequent partner in adventure, had a plan to traverse the range from north to south, sticking to the tops as best we could, starting from the ski field and ending some 50km later in Kingston on the southern shore of Wakatipu.

Sounded simple enough. We’d catch a lift to the ski field base and surf the ridges until they turned downhill and we’d skip down to Kingston arriving three days later.

The first reality check came when we uploaded the proposed route into a computer mapping programme. The elevation profile looked like some sort of sadistic sine wave. We looked at each other in pseudo sanity standoff, hoping the other would suggest a nice day hike instead. Far too headstrong for that, we started planning.

Luckily the season was on our side. The early February days were long and hot. So, leaving the summer swelter of the Wakatipu Basin we headed into the cooler alpine to start the adventure.

We shouldered our packs at the ski field and, without saying much, headed upwards to Lake Alta from where we turned left towards Wye Saddle. 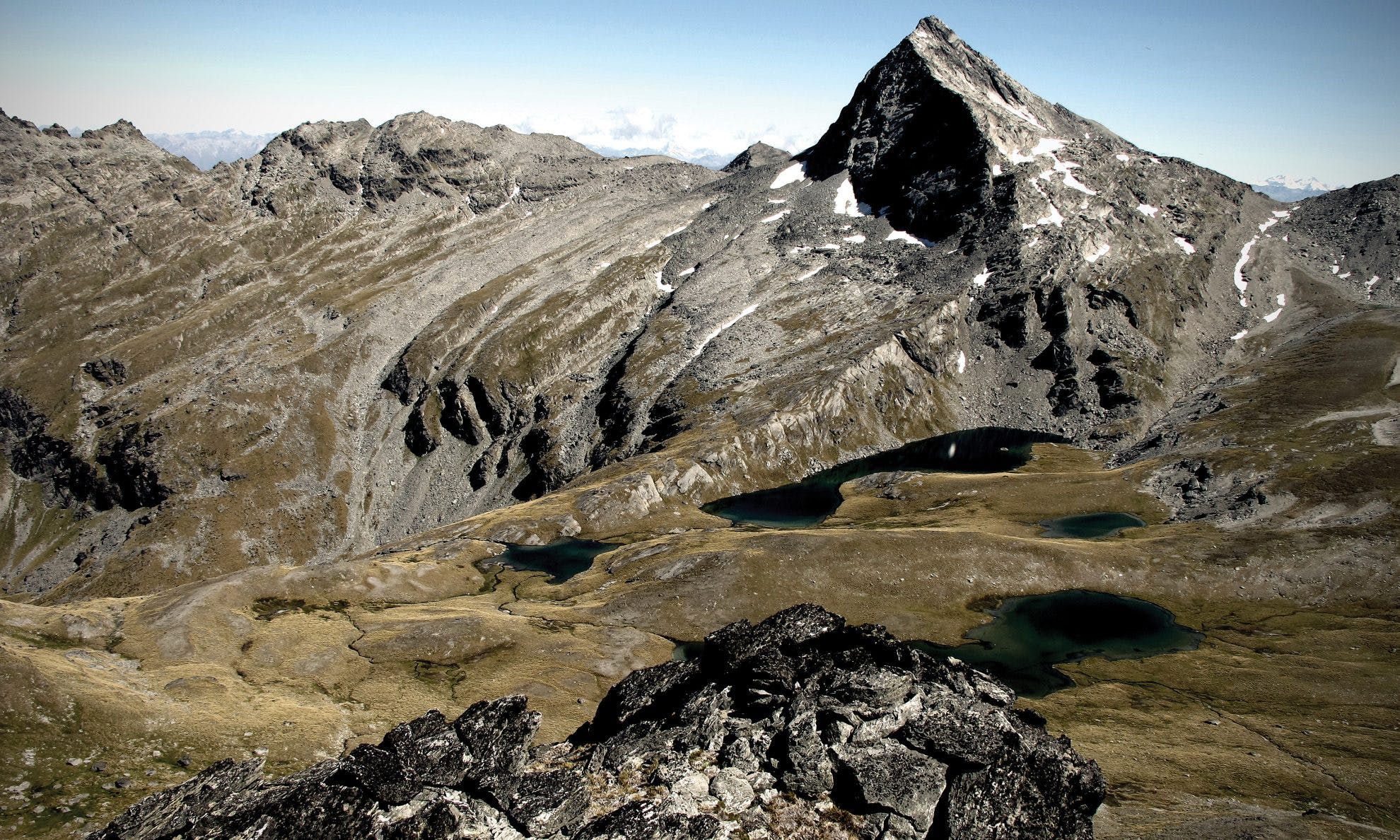 Trudging up the rubble mixed with wildflowers and the odd gurgle of standing water, we soon found ourselves at the top of the first bump in the road. Our plan was to follow the tops as best we could, keep whatever height we gained. More than anything, we wanted our traverse line to be both proud and aesthetic.

From the saddle our route headed slightly left to follow a ridge of unnamed satellite peaks, from where there were stunning views of the south side of Single Cone. The pockmarked hanging valley below us was filled with tarns and an oasis of green grass amongst the slate grey rubble. The climbing was straightforward and our collective spirits were high. We hadn’t found any difficulties and we were confidant that our chosen route would go.

Before we left town we were unsure if our intended path along the ridge was even possible. According to Moir’s Guide, the traverse had been done previously but the description was vague; the editors ensuring that the adventure of this undertaking was left intact.

We planned our route as best we could, but we knew at several key points the extent of our planning was a circle on the map, implying that we would somehow find a way through. That suited us fine – even the real possibility of failure.

Continuing along we came to the first unknown. Cresting the top of the Wye Creek Valley, we dropped into the Doolans Creek Left Branch. This deep valley cuts through the range, forcing us to descend one side only to climb up the other as we head south.

Since leaving Lake Alta we hadn’t seen any form of trail, a rock cairn or any other sign of human habitation. By leaving the Wye basin, our early out and first escape route was closed.

We descended sharply into the valley, aiming at where we thought we needed to go next. It’s a long, broad hanging valley and we passed three tarns before starting what would become the longest climb of the trip. Grinding slowly through the stunted tussock and scree slope we headed up and up. The sun was intense and without a breath of wind the heat of the day was becoming an issue. 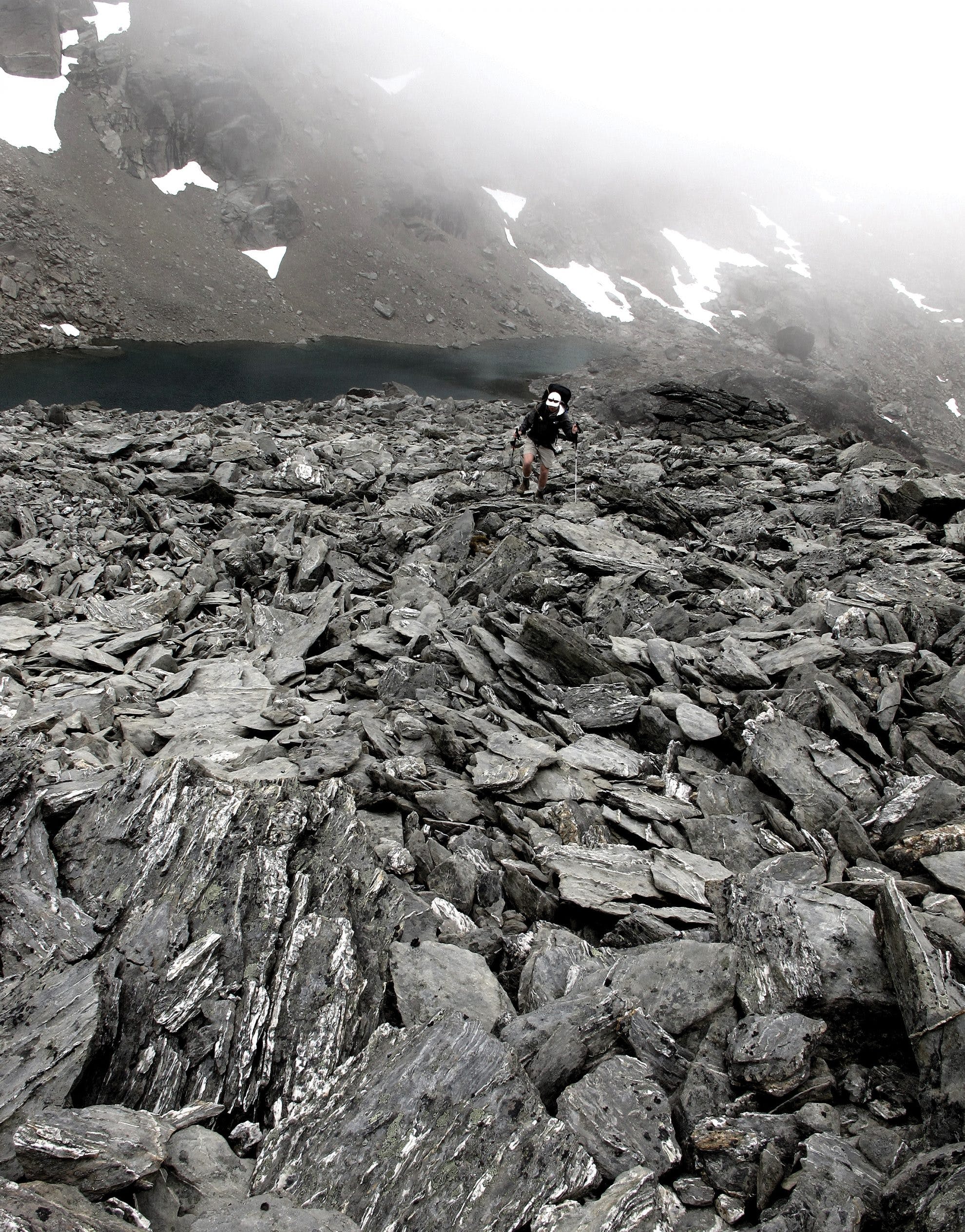 Steep scree near our bivvy cave

Finally we crested the long and steep scree slope to reach the cirque that held a small tarn. It had been a long day of climbing and we’d planned to camp the night there. We’d heard rumors of a rock bivvy someplace around the lake. In a basin filled with car- and house-sized boulders, finding our boulder became an exasperating challenge. Eventually we happened upon a large boulder with a plush, spacious and weather-shielded bivvy cave.

As night fell and we crawled into our sleeping bags, the sky began to cloud over and to my non-surprise we woke to dirty dishwater sky and persistent rain. The cloud had moved in and it was the sort of day where coffee and the morning paper are the most ambitious of plans. We had lots of daylight to play with so decided to wait it out.

When the sun did eventually break through we started out once again, aiming for Kingston. We began with a route-finding roll of the dice – we had two small cols to choose from a couple hundred vertical meters from the lake. Left looked right so we went for it. But it was wrong and we were forced to return to our bivvy spot and aim for the right-hand saddle.

Here, a whole new world opened up to us – a scary-steep, slightly sketchy downclimb brought us to another hanging valley containing Lake Hope. Far in the distance we could see where we needed to go. It felt like the last challenge before the ridge widened out was just in front of us. Standing at the head of the South Wye Valley we would hold our height, sidle around and pop over Skingut Pass.

Sounded straightforward enough. What looked like a cruise on the map was side-hill-hell in reality. An angling traverse of 3km that gained 1000m. Trackless and overgrown with tussock over head height, interspersed with speargrass and spaniards it was the sort of tramping that you long to forget.

Cresting the pass our hearts sank. What we thought would be an easy ascent back onto the ridge proper was anything but straightforward. Overlapping bluffs and terrain that thwarted upward progress, threatened to end the expedition right then and there. The road ahead was best surpassed by descending to valley level and then ascending the massive slope to bring us back to the ridge. A descent of 300m followed by an ascent of 700m – all within the space of a single kilometre. 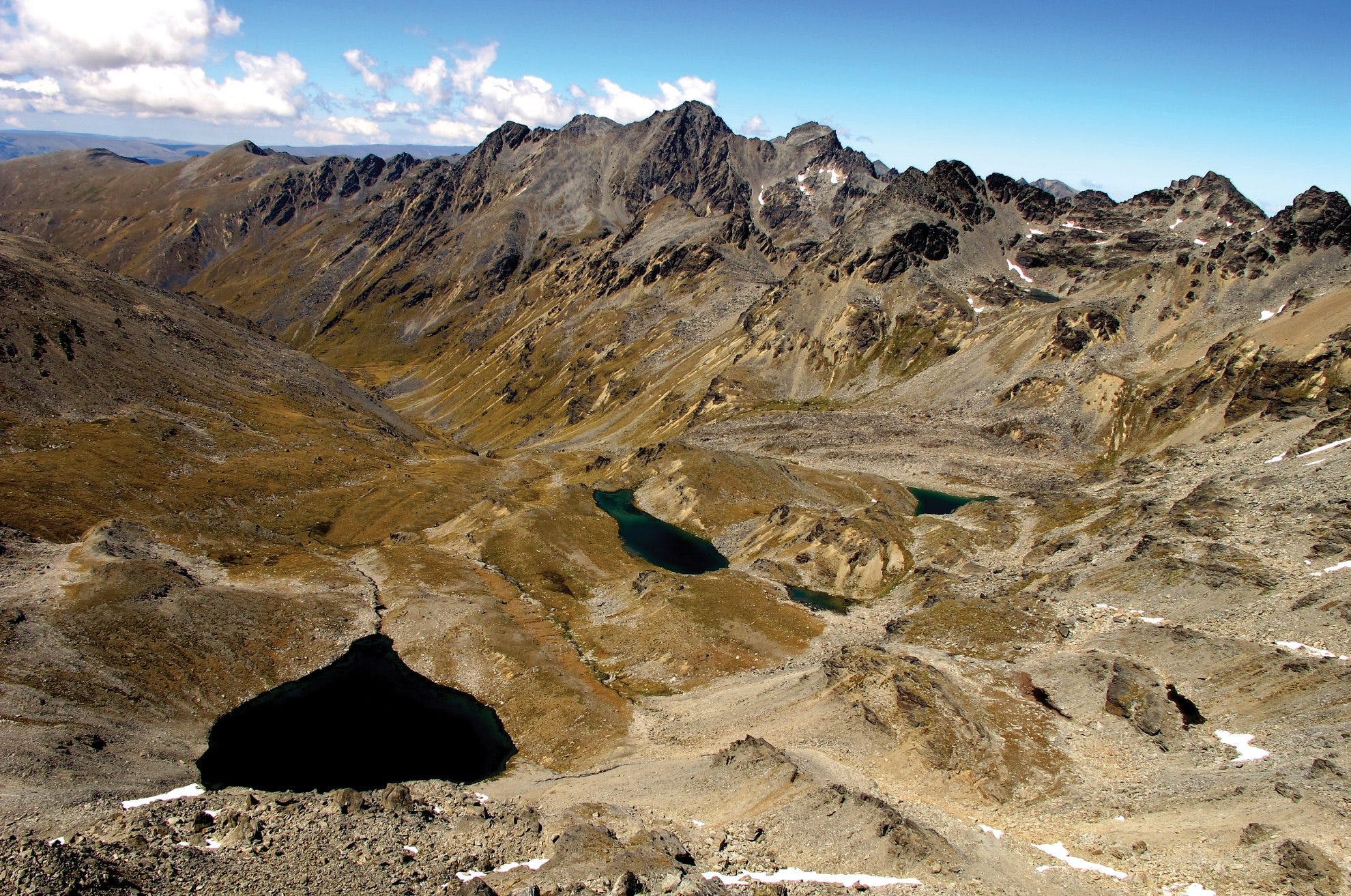 The lakes of Upper Wye Creek

It was five in the evening and our options were starting to run short. We could bivy where we stood and continue the next day, leaving us 25km of ridge walking, or we could pull the pin. Our last logical escape route was at hand so the decision was made to call it a day and head down.

The rest of the ridge would wait; we could escape down Two Mile Creek – the next valley south from South Wye Creek – and get back to Lake Wakatipu. Our easy escape turned into a full-body bushwhack through monster tussock and hidden bluffs. Eventually the terrain relented and we found a four-wheel drive track that took us to the highway.

People ask “What’s it like up there?” The truth is far wilder then fiction. Just outside the front door of Queenstown is some truly amazing terrain. Though I was never more than 20km from my house, we were on an adventure a world away. When the snow melts and the days get warm, we’ll be back.