I’m lying upside down with my legs in the air. My pack is jammed against the slippery log I had been standing on five seconds earlier. I stand up wincing and kicking myself for rushing. Up ahead I can hear Quentin burrowing into another thicket. The boat is only 10 minutes behind us but may as well be on the other side of Lake Te Anau. A few sandflies touch down on my bare legs. Bastards. Welcome to Fiordland.

A few minutes earlier we’d cruised into the South West Arm of Lake Te Anau and jumped out at the Doon River mouth, now there’s just the two of us, seemingly the only things not festooned in moss.

On the boat we decided to ignore Moir’s advice and take to the true left of the Doon where there was an old track. It turned out to be a good choice. After the initial thickets we found old markers and a strong deer trail. We have an account of a trip here from some other Wellington trampers six years before. They took to the true right of the Doon in typical Fiordland weather and had a real grovel.

By contrast it is clear blue sky and we are flying. Their trip report breaks for dinner and a sleep at the Doon bivvy rock. We pick it off the map as a good spot for lunch, but by the time we sniff it out it is only time for morning tea – the strong deer trails on the river levees are proving a veritable motorway.

Lunch is had at the confluence of Campbell Creek and the Doon. We had intended to climb over Mt Donald to the head of Lake Wapiti but limited route information and the view of snow on the southern aspects (we didn’t bring our ice axes) makes us reconsider.

Over my usual Fiordland lunch of Tortillas with sandflies we estimate that we can be at the head of Lake Wapiti tonight if we go up Campbell Creek, whereas it would be tomorrow night via Mt Donald. 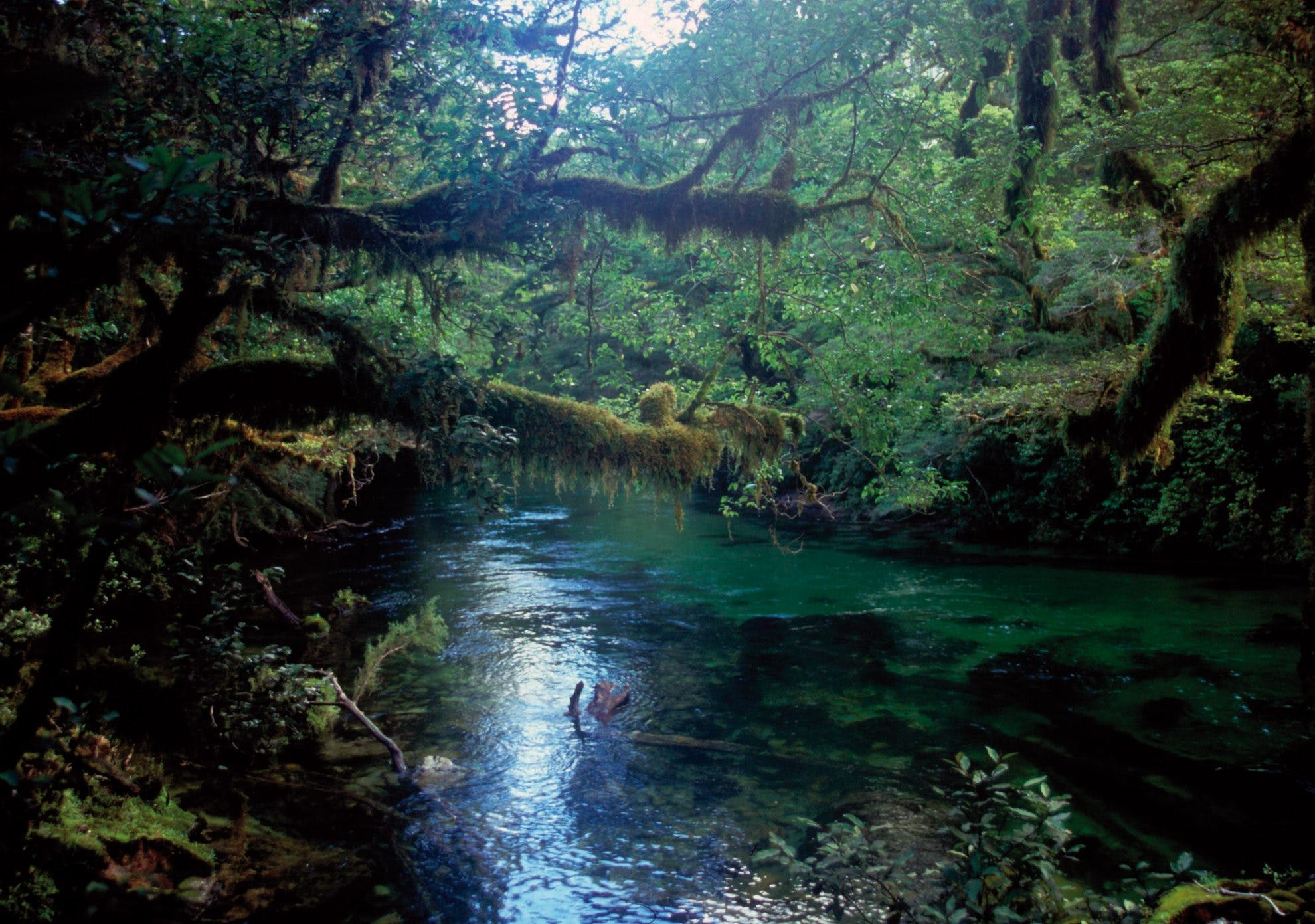 Everything is covered in moss along the Doon river

We know from the trip report that Campbell Creek is horrible. So it proves. It takes two hours to move 500m – horizontal, not vertical! Huge boulders and bottomless holes spanned by rotten logs and vines – it’s dire. Our route reflects our idiosyncrasies. When Quentin is in front we climb high, only to invariably hit an impassable bit and while we backtrack I move to the front and move us closer to the river, when that is invariably blocked I backtrack, Quentin takes the lead and we climb again, and on and on for two hours.

After this fulsome grovel we eventually get to the top of the waterfall where the river flattens out again and we find a few more deer trails. It is well and truly evening by the time we break out into tussock and more boulders and get a view of Lake Wapiti. It’s an impressive place but I am impressively stuffed and don’t get my camera out. Quentin is like the Energizer bunny and wants to push on. To get around Lake Wapiti you need to climb 150m then sidle ledges above the lake. While I try and recall what I have read in Moirs and the trip report, Quentin has climbed 50 of the 150 metres. Nothing for it but to wearily haul my way up the steep tussock. The ledge proves to be a neat route. Bluffs above and bluffs below but the deer come this way, the grass is long and on a dry afternoon it feels secure, easy and dreamy. Fiordland at its best.

We camp at the far end of the ledge where it expands out to a bench and we get swarmed by sandflies. At 1050m. Bastards. Again, welcome to Fiordland.

Moirs describes an easy walk off to the head of Lake Wapiti, but enclosed in morning fog the next day we can’t find it. As a concession to the steepness of Fiordland we are carrying a ball of string from Mitre 10. So it comes to be in the clag above the Lake Wapiti delta I am perched on a bluff unrolling the ball of string and doubling it and lowering our packs down the ‘easy walk off’. Below the bluff it is very easy.

The pass to Twin Falls Stream looks okay and is easily reached from the delta at the head of Lake Wapiti. It’s deceiveing, because looking back from Twin Falls it looks like it would be helicopter-only, when in fact it’s actually really simple and quite pleasant. Over lunch in the hanging valley of Twin Falls we observe a pair of whio. Later, after our trip, we report the colours of their leg bands and discover they were released in the Murchison Mountains a couple of years ago. Quite a journey for the little ducks. 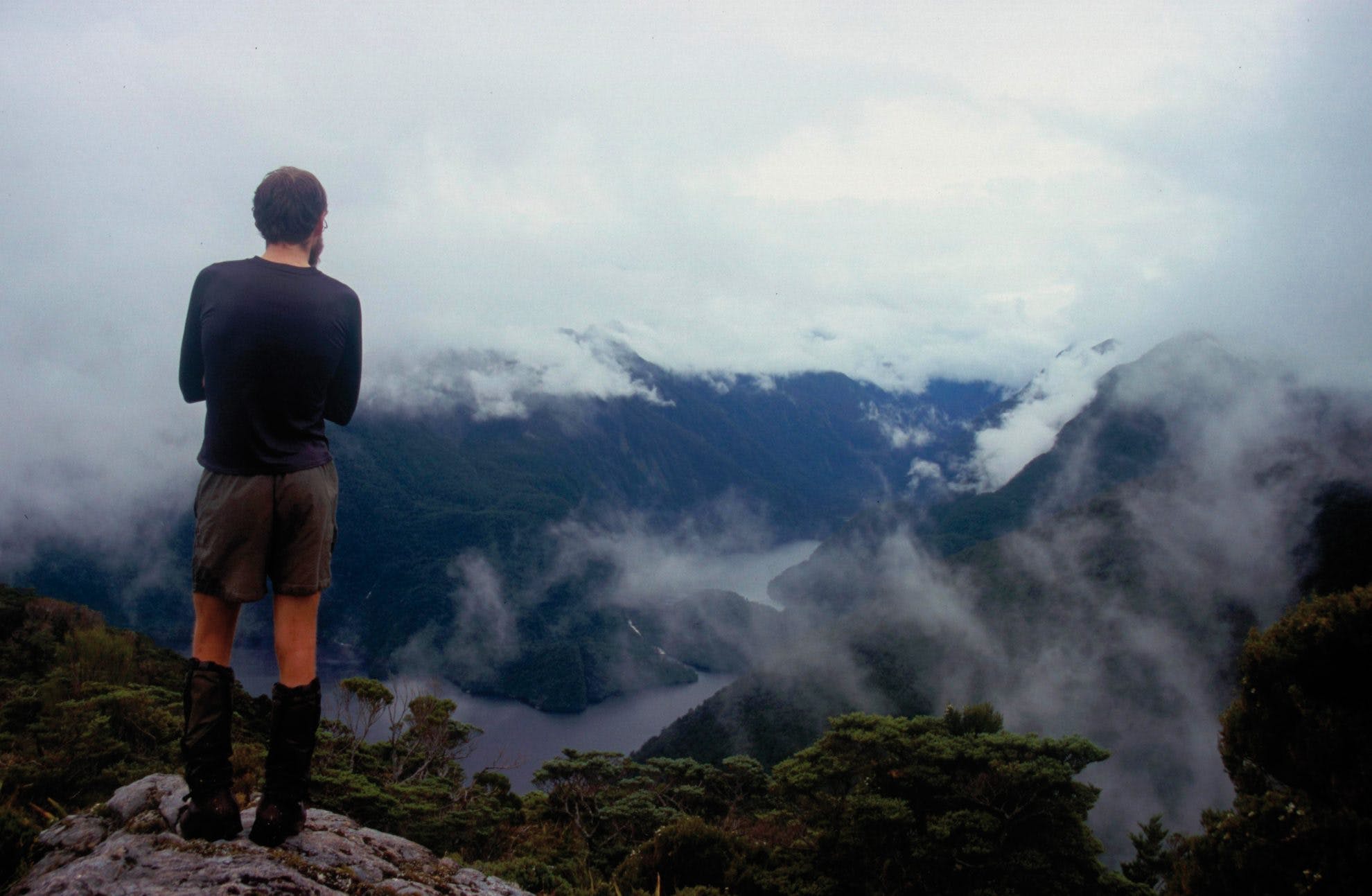 Overlooking George Sound and Lake Alice from the Overlander Ridge

Quentin has his eye on a ‘new route’ from the Twin Falls creek to the lower Stillwater River, but we’re making such good time that we decide to follow the Moirs description to the Upper Stillwater. The Stillwater is a standard huge flat Fiordland valley filled with log jams. The gorge by Ethne Stream is small. We’re nearly through it on good deer trails when the deer take off up the hill. We ignore our good senses and a basic tenet of Fiordland travel and don’t follow them. We are lucky to get through on a hairy low sidle. The deer of course knew best and they climb high and early to avoid a huge bluff. Fortunately, part of it is vegetated and that’s how we sneak across, but it is slow and ugly and we are annoyed at ourselves for ignoring the good deer trail.

Our second night is spent in incredible pepperwood forest. Incredible because the horopito is the dominant species and has grown tree like. There’s plenty of room for a tent underneath. Kaka threaten to keep us awake with their raucous cries at dusk. High in the trees we spy silvery silt, an indication of the depth to which these flat Fiordland rivers can back up in flood – a phenomenon which has made many trampers into swimmers on the Dusky Track.

The next day we charge down the Stillwater on strong deer trails. There is one annoying gorge with attendant swamp forest which slows us down but other than that it is pretty straightforward all the way to Lake Marchant. This lake is impassable by foot, although Quentin’s swim seems to take him about half way across before it gets over waist deep. Such is silting. We spend the night at the historic Caswell Sound Hut. It’s very dark although this means the sandflies don’t come in. Caswell Sound is surprisingly anti-climactic, although it’s always pretty cool to tramp to any wild coast.

The next day we retrace our steps all the way back up the Stillwater, our hut-bagging duties discharged. We make better work of the gorge and even disturb a large mob of track builders resting in the ferns. A really large mob. It feels like deer are still charging away from us 10 minutes later.

From the base of the gorge that gave us problems a couple of days earlier we head up Ethne Stream. This stream is tiny and features the ugly thick bush and small scale steepness that seems a bit unnecessary in somewhere as grand as Fiordland.   The map is marked incorrectly here. Streams don’t normally cross spurs into new catchments. The Moirs description is about as historic as Caswell Sound Hut, however we do find a good place to camp at about the 600m contour, quite a bit higher than Moirs says. During the night male and female kiwi call near our tent – a tent we have tried to make bombproof as plenty of rain is forecast. Unfortunately the tent is not bombproof and with only a three-quarter length mattress it is Quentin who finds the water pooling first 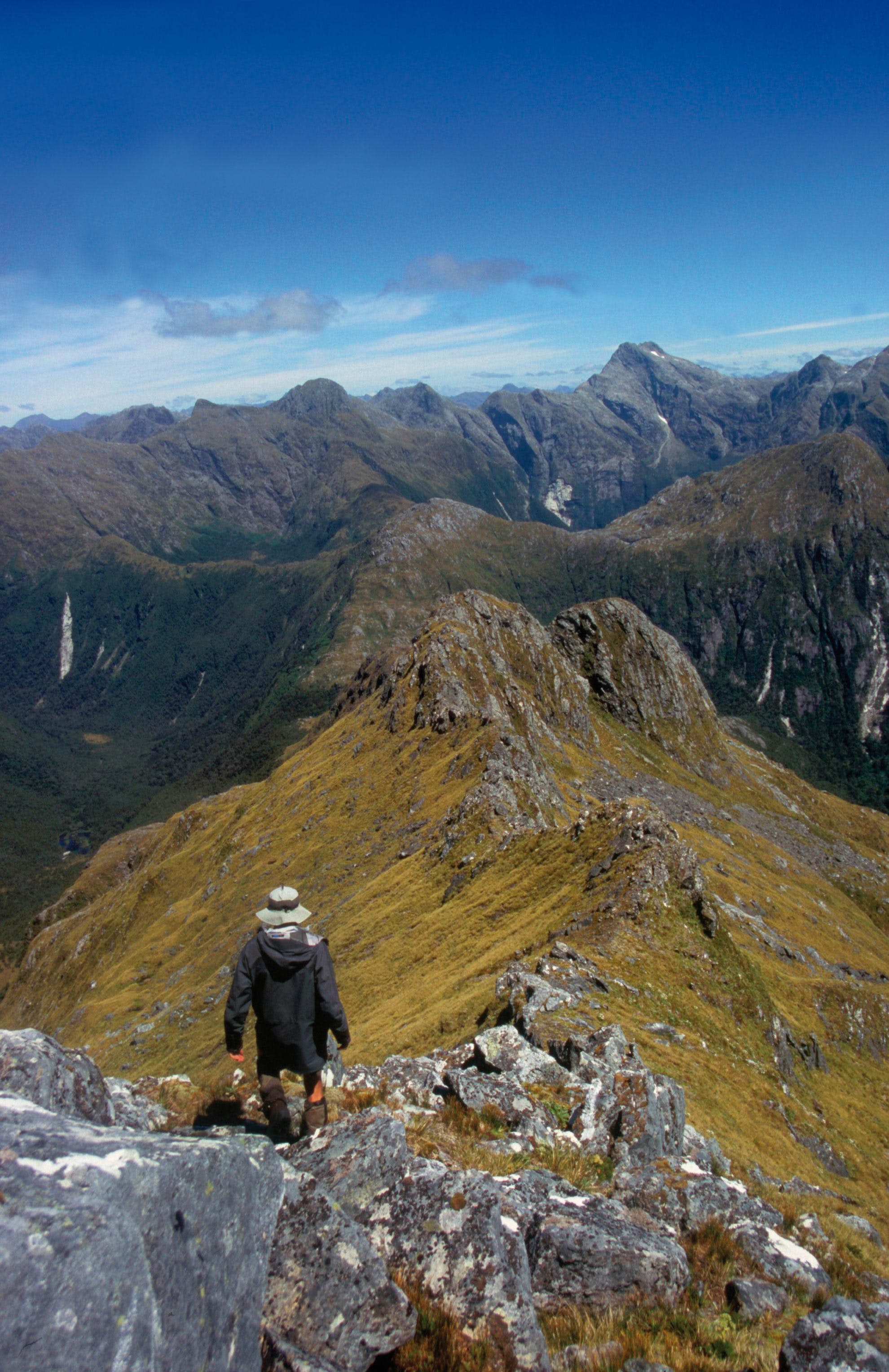 We spend all morning in the pit waiting for the rain to stop and when it does we carry on over the Overlander Ridge. The historic Moirs entry describes it as a well marked day trip from George Sound Hut. We find one marker, very thick bush and lots of bluffs.

On reaching George Sound we are pleased that we consulted a tide chart. Rather than being desirable (Moirs) low tide is essential. It is slow travel on slippery rocks and the sandflies move in for the kill. Bastards. We collect pockets full of mussels as our strike back against nature.

We take a pit day at George Sound Hut and feast on mussels and food left by boaties. After our pit day we head for Lake Thomson with a side trip to Mt Henry, a main divide bump with superb views of this part of this gloriously beautiful, rugged wilderness.

We reach Lake Hankinson Hut quite early and our luck holds when two foreign fisherman turn up by floatplane. There’s space for us in the return flight and 15-minutes later we are standing on the waterfront at Te Anau blinking at the sudden transition back to civilisation.