Not content to simply walk one of New Zealand’s premier tramping tracks, Scott Kennedy decides to ski it

It was around 10 years ago that I flipped through a Colin Monteath pictorial book illustrating a traverse he made of Routeburn Track on skis. It was hard to resist planning a similar adventure, something that would add to my experiences of the wildness, grandeur and the simple pleasure of being in the Route Burn – a place I have got to know so well during summer.

But it wasn’t until the big storm of 2011 that I finally had the chance to tackle the Routeburn in winter. Over the course of two days, more than a metre of snow was dumped in Queenstown.

Before the streets were even cleared we had hatched plans, drafted in co-conspirators and had the gear ready.

Three days later we pulled into the Routeburn Shelter car park to find a dusting of snow on the ground. We’d expected to be inundated with the white stuff from the get-go, but we’d left more coverage in my front yard 40-minutes away. We weren’t overly concerned; we were confident we would find the goods eventually.

Sophie, Adrian, Di and I started walking the track with skis and boots lashed to our packs. I’d dreamed of skiing straight from the car, but the inch of snow just wasn’t enough.

The weight of gear was enough to cut deep into my shoulders by the time we’d crossed the river and were onto the track proper. Laden with ski gear, food for the night, a log each for the potbelly and enough warm stuff to keep smiles on our faces we started upwards. The plan was to stay at Routeburn Falls Hut and explore the ski terrain around Harris Saddle. Late the next afternoon we would pack up, retrace our steps and be back at the car before dark and make the dash back to the pub in Queenstown.

As we forged upwards, I kept hoping that we’d hit the snowline. Alas the big monster dump that ground Queenstown to a standstill had missed Glenorchy. We were on foot for the foreseeable future. Reaching the steep incline towards Routeburn Falls Hut, the lack of deep snow was actually comforting as the massive avalanche slide paths on the route to the hut had often kept me up at night.

Just as we got to hut height, the snow arrived, big time. Massive drifts and a winter’s worth of accumulation encroached on the track and any fears that we were massively over-equipped were alleviated.

Metres of snow surrounded the hut, transforming it into a winter wonderland. All the trepidation about snow levels swept away the moment we looked upwards. It didn’t even look like New Zealand; the surrounding peaks were frosted with Alaska-sized cornices and enough powder to keep us grinning for weeks.

Dropping our gear at the hut we took the opportunity to go rip a few turns before dinner. Climbing towards Harris Saddle with skins on our skis, we were treated to the awe-inspiring sight of the valley chock-a-block with winter goods. In the relative safety of the center of the valley we skinned upwards eventually reaching a headwall below Lake Harris.

With the ever-present threat of avalanches on our minds, we tested the snow and found it well bonded. The opportunity to rip it up was suddenly a reality. With not much life left in the day we picked a nice line up a finger of fresh snow perpendicular to the lake, across the valley from the Routeburn Track. Slashing a skin track zigzagging up the face it was straightforward climbing.

Traversing a bit I found a line that looked life changing. Twenty perfect telemark turns later, face covered in billowed powder and a frozen grin I hooted to a stop in the middle of the valley. Seconds later I was joined by the rest of the crew. High-fives a go-go, it was time to head back to the hut, pop the billy on, spark the potbelly and feet up for the night in prep for the next day of skiing.

The night was filled with laughter, a nip or three of whiskey and enough food to open a restaurant. The orange glow of the fire reflected the warmth in my soul – as a backcountry skier these are the days you dream about.

Next day, it was cold and clear. Starting early we climbed back to our highpoint from the previous day and continued on over the headwall to the shores of Lake Harris. Like a cathedral of winter worship, a monochrome scene of snow, rock and sky unfolded in front of us. A few tentative pokes with a ski pole confirmed that the ice on the lake was more than thick enough to support our weight. 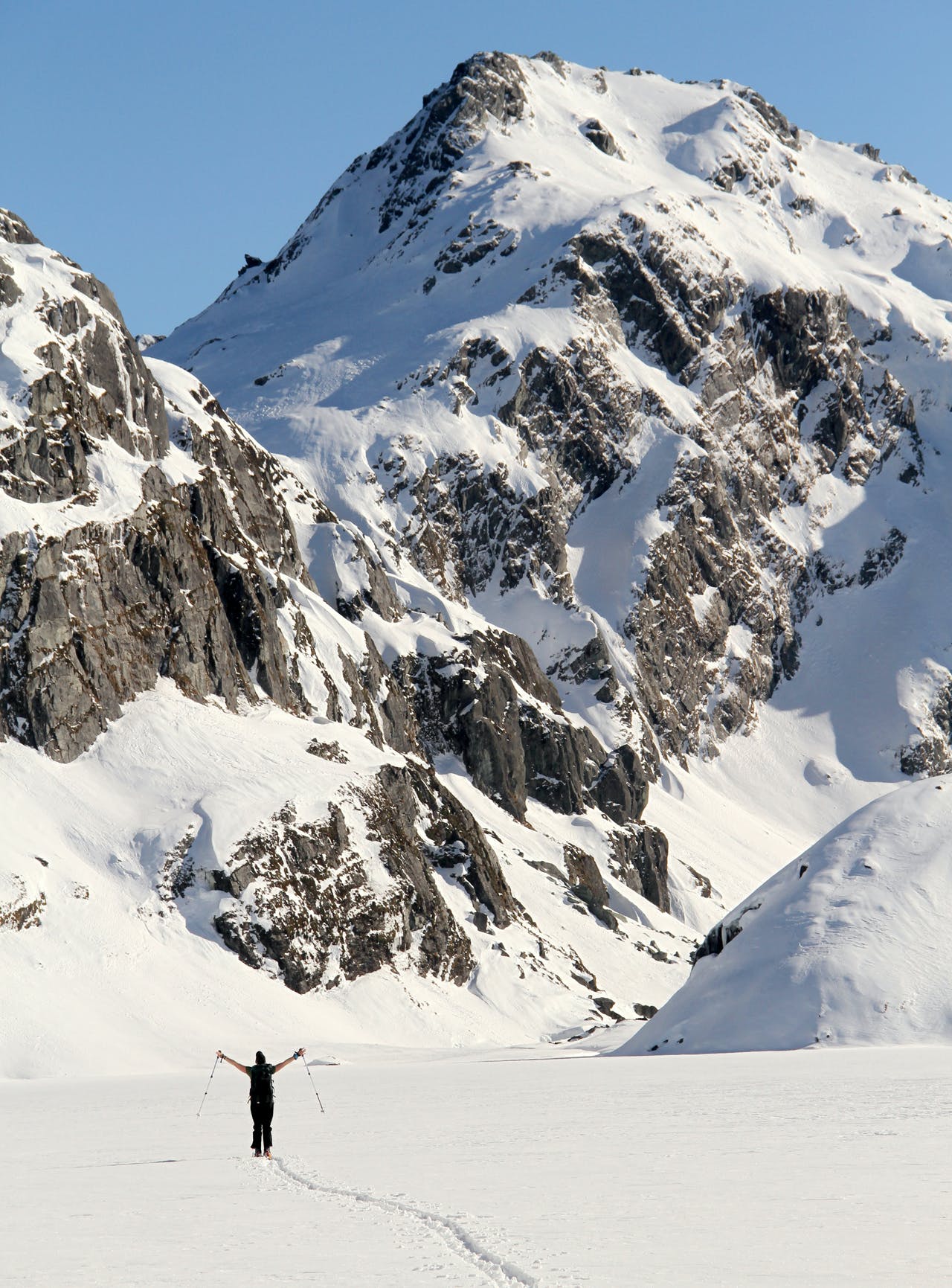 Skiing across the middle of the lake, the Ailsa Mountains loomed large above. Like standing at the base of a fortress the stone walls held us captive. At the end of the lake we left the snow-covered ice and started to cut a switch-backing track towards the saddle.

For the first time since we left the hut in the morning we crossed the Routeburn Track proper just as we crested the high point of Harris Saddle. With options aplenty we skied down to the shelter for some lunch. After the two minute ski we realized the scorching winter sun meant that it was plenty warm enough to eat outside.

The end of lunch meant that it was time to start heading back. We ripped up the slope leading from the saddle back down to Lake Harris – slicing Cadillac turns, leaving hoots in our wake with the afternoon sun high in the azure sky. Across the lake again and onto the headwall for another perfect run down to the hut.

We grabbed the remainder of our gear and started the long walk back to the car.

While the ambition to ski the full length of the track remains, we may need the snowfall of the century to make that dream a reality. The high country will always see enough snow for a winter adventure above Routeburn Falls, getting enough coverage to actually ski the entire track may require some luck and some more climate change.

Tired bodies, wet gear and two days of hard skiing made our heavy packs seem even heavier. We nearly buckled under the weight, but in the end we were kept aloft with the buoyancy of the experience – one we won’t soon forget.

Trampers from across the globe visit the Routeburn every summer, filling the huts and turning the trail into a motorway. For me those quiet winter days when the tourists are gone, the snow steals all the ambient sound and where you can find yourself alone with your mates are when this track really comes into its own.

As overnight backcountry ski trips go, this one is pretty straightforward to put together. The typical winter snowline is at Routeburn Falls Hut so a trip similar to ours is possible most winters. The ski terrain is intermediate to advanced. The avalanche risk can be extreme in the area; this isn’t a trip for people not well versed in avalanche forecasting, avoidance and recovery. Be careful out there.

Skiing to Harris Saddle is only possible when the lake is frozen – skiing on the track above the Harris Face, slicing through some full-on avalanche terrain is about the most dangerous thing I can think of.