Ever since its creation in January 2010 my friend Timothy Burrell and I have shared the dream of running the 77km Hillary Trail through Auckland’s Waitakere Ranges from Arataki to Muriwai.

One morning earlier this year, seven of us took that dream, gave it a cold, hard stare… and ran off into the dawn.

From Arataki Visitor Centre, a series of iconic Waitakere tracks led us to Huia; muddy, rooty and rugged. This was a perfect warm-up for the meaty 400m ascent of the infamous Karamatura Track.

With anticipation of our favourite stretch in all the Waitakeres, we galloped along the Puriri Ridge Track towards Whatipu. Every so often we stopped to breathe in the gorgeous views, before forcing our eyes on the trail to negotiate the rocky descent.

By the time we reached the highest peak overlooking Whatipu, over three hours had passed. Refilling our hydration packs, we loaded them with electrolytes and chugged on towards Pararaha. Approaching noon and starting to swelter under the sun’s blaze, we were grateful for the natural shelter of coastal forest.

Normally three hours would be enough for a decent Sunday morning run, but today we were barely quarter way through. As tough as ultra distance runs are physically, it’s just as important to adjust your mental perspective of distance and time otherwise the mind would be the first fuse to blow. Thinking about the finish too early during a big day like this is often my downfall, so today I ticked off each beach as a chain of smaller finish lines.

Our general strategy was to be conservative in the first half. But that plan was put aside on the fabulously flowing-down hills into Pararaha. Letting gravity do the work, I did my best to imitate the Tarahumara Indian runners celebrated in Christopher McDougall’s Born to Run, and just hung on for the ride to arrive at Karekare feeling exhilarated and refreshed, rather than broken and stiff. 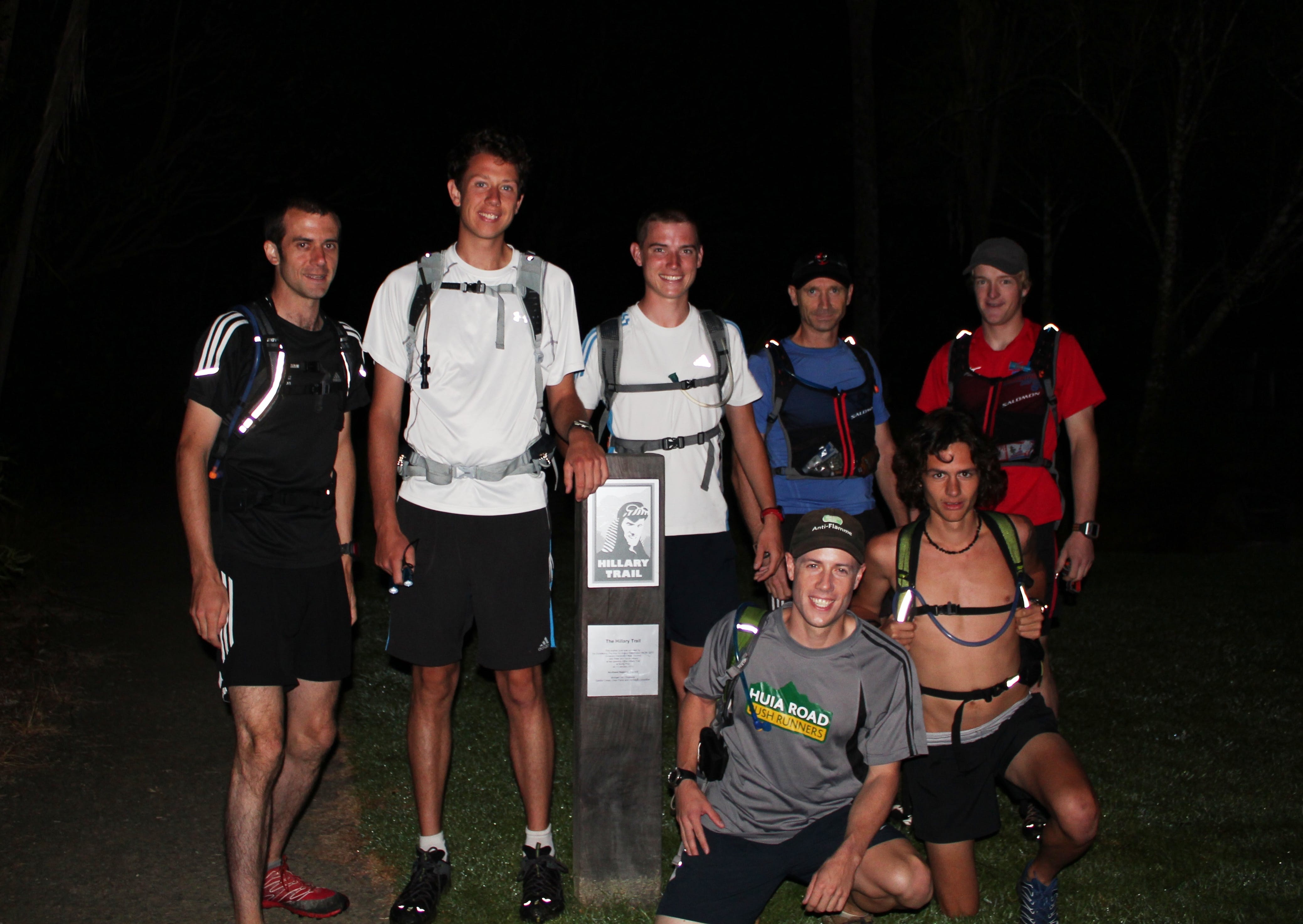 The seven runners had a predawn start

There is a short section of road before dropping down into Piha via some nicely groomed tracks. Peppered with a dense network of tracks, Piha is a popular spot for day walkers, especially in summer. Sure enough, the pool at the base of the Kitekite Falls (Waitakeres’ highest at 80m) was packed with picnickers. But we didn’t hesitate, diving headfirst into the water to wash the miles out of tiring legs and emerging feeling fresher than when we started.

With just over a marathon under our belts, we made the most of our Piha lunch break. The running time 7.5hr compared to three hours for a road marathon, reflects the difficulty of the terrain. When running the Hillary Trail, be prepared to cover between 5-8km an hour.

The climb out of Piha is steep, but rewarded with spectacular views of secluded bays trapped by sheer hillsides. Further north, we were in awe of the sand dunes – sharp, rippling slopes towering above Lake Wainamu. Hill-reps to save for another day, we thought.

We followed the stream towards Bethels Beach and the start of Te Henga Trail, which is the final stretch in the Hillary Trail. More than 60km through, blisters and chafing began to take a toll. But a last rendezvous with our support crew set us up for the final grind.

‘Stunning’ is an apt description for this high coastal trail. Winding its way around the coastline, waves surged and crashed against the rocks below and before long the gannet colonies of Muriwai were within sight.

The Hillary Trail – running it or tramping it – is an ambitious undertaking, but a great achievement. For seven endurance junkies it was a challenge we felt privileged to complete; a real adventure in the name of our greatest adventurer.

Clocking in at 77km, fit runners can get through it in a day, while trampers can expect four days with three nights camping. Auckland has long deserved a great multi-day trail of its own, so before traveling to the Kepler, Milford or Heaphy, check out the Hillary Trail and ‘knock the bastard off’.