On the eve of the 10th anniversary of losing his leg in an eruption on Mt Ruapehu, William Pike heads back to the shelter that saved his life. By Monika Coles

Early in the morning on September 17, two headlamps bobbed in the dark as snow crunched satisfyingly beneath crampons.

Ten years earlier, on September 25, William Pike had survived a volcanic eruption on Mt Ruapehu. He was back, with his brother Andrew, to climb the peak that claimed his leg and nearly cost him his life – it’s an ambition he’s had since the earliest days of his recovery.

“I set myself the goal of getting back to the Dome Shelter and if I set myself a goal, I make sure I achieve it,” he said.

He’s tried before without success. One time his prosthetic leg broke. Another time he developed blisters on his stump and on a third occasion, poor weather forced a retreat.

When Mt Ruapehu erupted in 2007, Pike and his friend James Christie were sleeping in Dome Shelter, near Crater Lake. Even though the shelter was not designed for overnight stays (it has since received a name change to Dome Equipment Shed to avoid the perception people can sleep there), the sturdy structure saved their lives.

“We had a shovel for a snow cave and we had a tent,” Pike recalled. They dug out the shelter to stow their gear while they climbed Tahurangi, Ruapehu’s highest peak. But the snow was soft and it took them longer than expected. When they returned to the shelter it was dark and they opted to sleep there instead of pitching their tent or digging a snow cave.

“Had we not done that we would have been blown off the mountain in our tent,” Pike said. “If we were in a snow cave, we would have drowned. So it was a good call.”

When Ruapehu erupted, a pressure wave blew the hut’s door open and rocks flowed in, trapping Pike and crushing his leg. “There was this huge noise like a jet plane,” Pike recalled. “I just remember seeing a sky full of moving rocks lit by a full moon. I couldn’t break free or dodge what was coming.”

Christie, who was unharmed, scrambled down the mountain to raise the alarm.

A decade on, Pike had no thoughts of overnighting on the summit. “I wouldn’t be pitching a tent on the crater rim for the night, let’s put it that way,” he said. 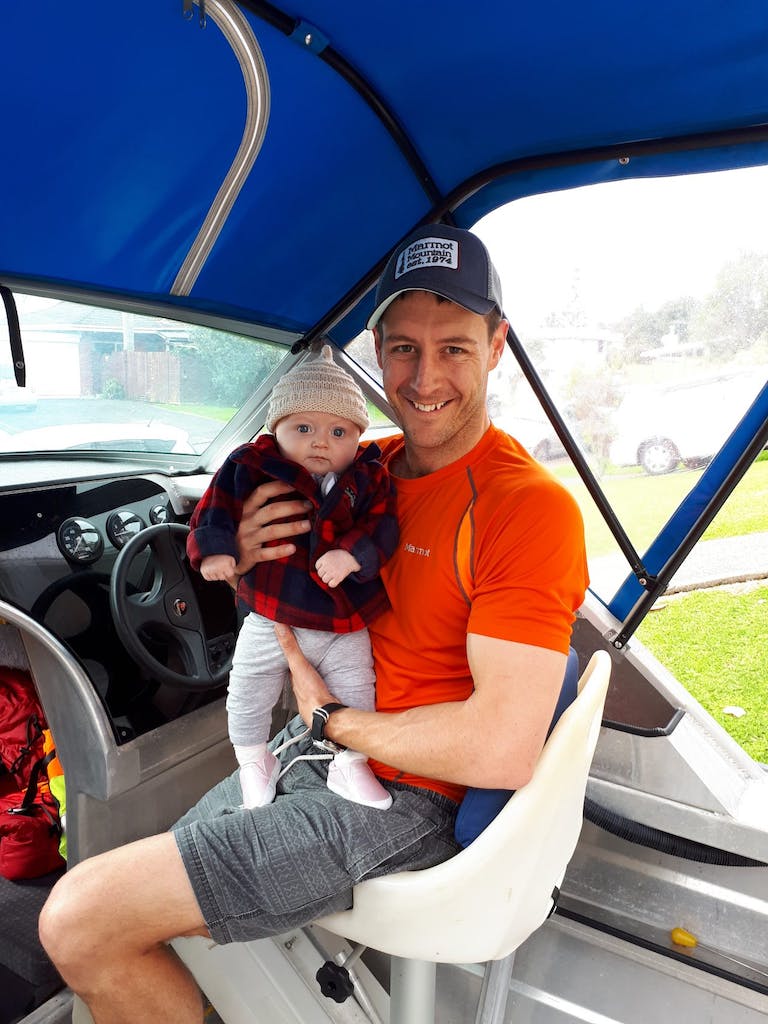 William with his daughter Harriet – he has plans to take her to Dome Shelter in 10 years’ time. Photo: Supplied

Instead, he and his brother slept in Ruapehu Hut, a New Zealand Alpine Club hut near Whakapapa Ski Field, alarms set for 4am.

“As soon as the alarm went off, we stuck our heads out the door and thought, ‘choice, it’s clear’.”

They were out the door at 5am, their crampons crunching through the hard snow – perfect conditions for Pike as he finds it difficult to walk through soft snow with his prosthetic leg. “It’s hard, it’s taxing. To be moving on hard ice with crampons on was efficient and great.

“We got off to a really good start and we climbed under torchlight for a good hour. I quite like climbing in the dark. People think I’m mad but it’s very common when climbing. It remained clear apart from the odd passing cloud, so we were quite comfortable heading up.”

They reached the Notch, which leads on to the Summit Plateau, at 8am. “It was gorgeous,” Pike recalled. “You can see the Cathedral Rocks, Te Heuheu and Tukino Peak and the ridge going up and towards Dome Shelter.

“When we got to Dome Shelter it was pretty phenomenal and extremely satisfying. To get back to the place of the eruption 10 years later, in winter conditions, with my brother, who’s been a big part of my life over the years, and having set that goal in hospital was pretty massive.

“It’s as beautiful as ever up there, such a special place, and I didn’t feel any resentment about why it had happened to me – nothing like that. I was so stoked to be back up there.”

His only regret was not being able to enter Dome Shelter. It was buried in snow and would have taken too much time and effort to dig out. Clouds began building around the mountain, so he and Andrew hugged, took some photos and began their descent.

They moved slowly; Pike’s prosthetic leg doesn’t flex like a normal foot, which makes it difficult on downhill slopes. They reached Ruapehu Hut 11am.

The climb capped a big year for Pike. He climbed Mt Scott in Antarctica, won a Blake Leadership Award and continues to run the William Pike Challenge Award. He also became a father for the first time.

“The birth of my daughter has made this year even more special,” he said. “I lost my leg 10 years ago, got back up there 10 years later and in 10 years’ time, I’ll take my daughter up there.”

– This story has been updated. An earlier version incorrectly stated the day William returned to Dome Shelter was on September 25, the day of the 10 year anniversary of the eruption. He returned the prior week, on September 17.