It’s cold, wet, white, and dark. Now that you know the downsides to winter, you can begin to appreciate the good: it’s quiet, spectacular, spiritual, and white. These 20 trips – day, overnight and multi-day – are good for any time of the year, but really come into their own during winter. Prepare your pack, and go

1. If you think Mueller Hut is spectacular…

Little wonder Mueller Hut is the most popular hut in Aoraki/Mt Cook National Park: the views, particularly at dawn and dusk, are fabulous and the route into this alpine environment is straightforward and well-maintained.

Fewer people know about the possibilities beyond Mueller Hut. Just 4km and 400m of ascent to the south is Annette Plateau. Compared to the route to Mueller Hut, the travel here is more demanding, requiring crampons and an axe, or skinned skies as you traverse around the base of Mt Ollivier, 1933m, and Kitchener, 2042m. Awareness of avalanche risk is essential, but in good conditions, the route is not technical.

Beyond Kitchener, ascend a moderately steep glaciated section leading to the plateau, which is covered in a flat, wide expanse of permanent snow and glacier ice. Crevasse risk here is low due to the wide flat nature of the terrain. Just keep away from the steeper sections.

From the plateau is a panorama of some of the greatest mountain terrain in New Zealand, including the Main Divide and Aoraki/Mt Cook. There are spectacular views of the icefalls running off Mt Sefton and other peaks, which are frequently in motion as avalanches let loose from above. The rewards of a little exploration are yet more lovely views of the Burnett Mountains to the east. Perhaps the best view of all is from the top of Mt Annette, 2235m, an easy climb on the eastern edge of the plateau.

If the weather is good, camping at night on the plateau is the cherry on the cake. Sunset and sunrise are fabulous, and, if you can brave the cold, a look skyward about midnight will have you gasping at the silver spray painting of the Milky Way.

The crest of Canterbury’s Craigieburn Range presents an uninterrupted wall of peaks running for almost 30km in a north to north-east orientation and with many summits over 2000m. With several ski fields on the range, there are options to get high without much effort.

Mt Cheeseman Skifield offers a good access road, ending just 300m below the ridge crest. Depending on snow conditions, and as long as you have an ice axe, you should be able to access the tops in an hour or so with the reward of an outstanding view of Canterbury’s alps and plains.

If you have picked the right day, you could well be warming yourself in the midday sun with nary a breeze to bother you. Take a picnic lunch, a thermos of hot tea and enjoy the view.

3. Top of the Ruahines 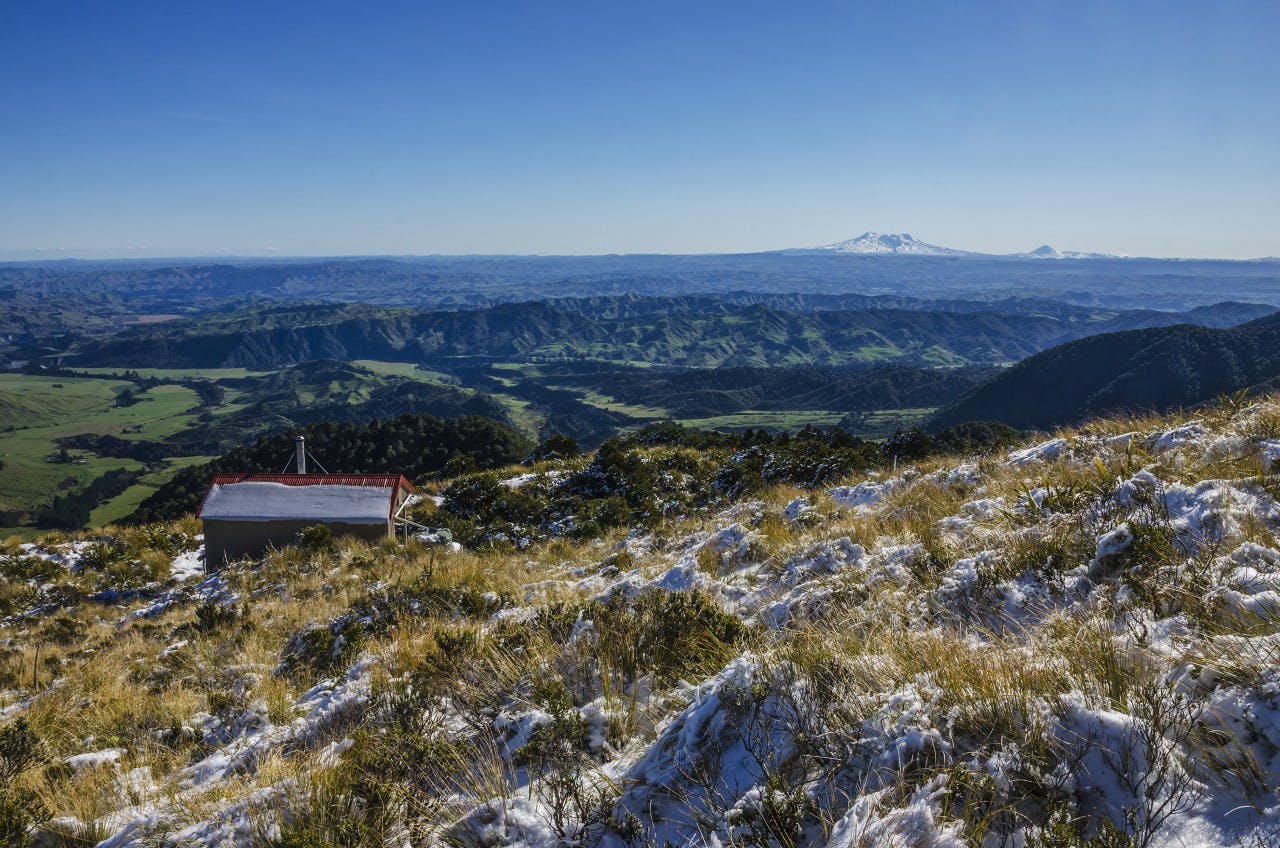 There’s something satisfying about reaching the highest point of a significant land mass, but this often involves several days of time and strenuous effort. Not so in the Ruahines. This impressive range tops out on a broad, flat ridge at 1731m.

While the summit of Mangaweka itself may be underwhelming, the views from it are panoramic – east across the Ruahines and north-west to Mt Ruapehu. The route to Mangaweka is also mostly along moderately inclining ridges. If snow conditions are good, it’s an easy snow-plod offering ever-improving views.

The most direct access is across private farmland, then up through bush to six-bunk Purity Hut, situated above the treeline looking out to the volcanoes.

While a trip to Mangaweka can be made in one long day, a night at the hut is a more enjoyable option. 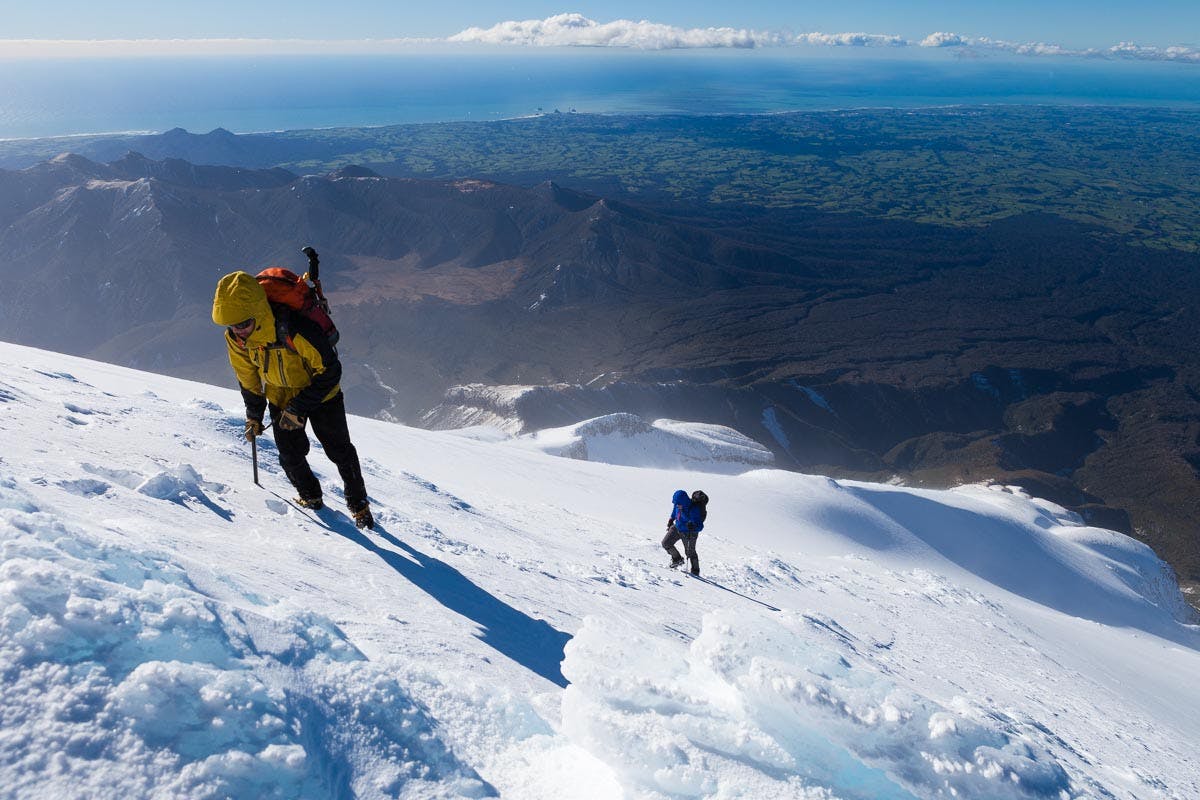 Most backcountry enthusiasts understand that Mt Egmont/Taranaki is a wolf in sheep’s clothing. While extremely accessible and straightforward to climb, being so near the coast and being such an isolated and elevated landmass means weather conditions can change quickly.

In winter, regardless of which route you take to the summit, climbing Taranaki demands at least the use of crampons and an axe.

One option to break the climb into an overnight trip, thereby reducing risk and increasing enjoyment, is to stay a night at Tahurangi Lodge, the Taranaki Alpine Club mountain abode (advance booking required).

Climbing Taranaki, even up the standard Lizard route above Tahurangi Lodge, is a great day out in the mountains. As you near the summit, the macabre rime ice becomes ever more present until, up in and around the summit crater, it resembles equisite natural works of art.

Back at the lodge, the facilities are as comprehensive as they are expansive and the sunset view from the deck to the Taranaki coast is something to behold. At dawn, you can enjoy a light show to the east as Mts Ruapehu, Tongariro, Ngauruhoe and the countless ridges between them and Mt Taranaki are silhouetted by the rising sun. 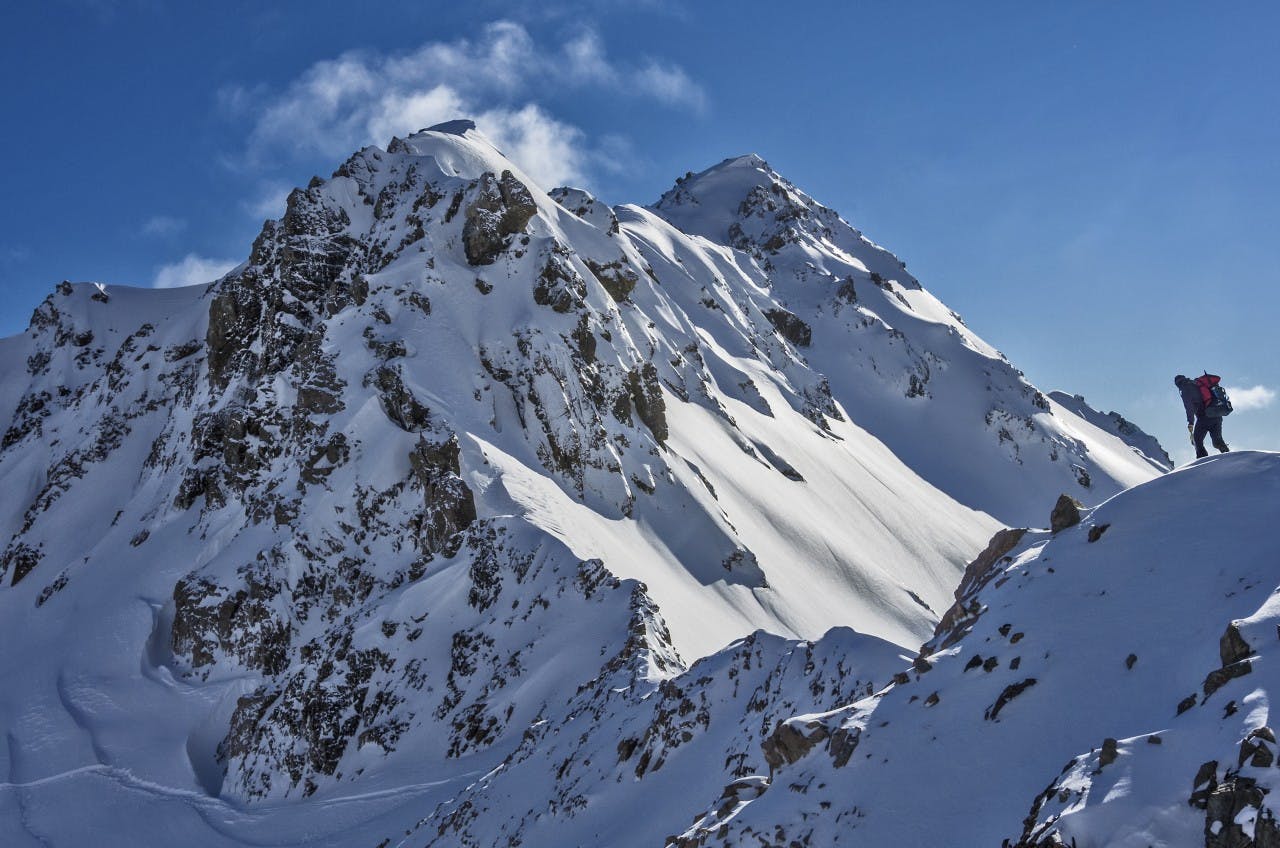 Depending on conditions, a climb of Mt Temple requires either straightforward cramponing or the use of a rope. Photo: Peter Laurenson

Arthur’s Pass is known for its savage weather and as such, it’s not the easiest spot to pick a suitable time to climb. So, easy access and an escape option are real advantages, which is why a climb of Mt Temple, 1913m, via Temple Basin Skifield and Temple Col is a worthwhile winter objective.

From SH73, a little north of Arthur’s Pass, to the ski field requires just an hour of steady uphill grind.

Even from the ski field buildings, the alpine views are beautiful with Mt Rolleston, 2275m, dominating an impressive skyline. To the east and some 500m directly above are a series of peaks, including Mt Temple.

Depending on snow and weather conditions, climbing to Temple Col and then along the ridge to Mt Temple’s summit can be straightforward cramponing, or require the use of a rope. It’s a great place to practise climbing skills while enjoying superb scenery, safe in the knowledge that a coffee or beer at Arthur’s Pass is close at hand. 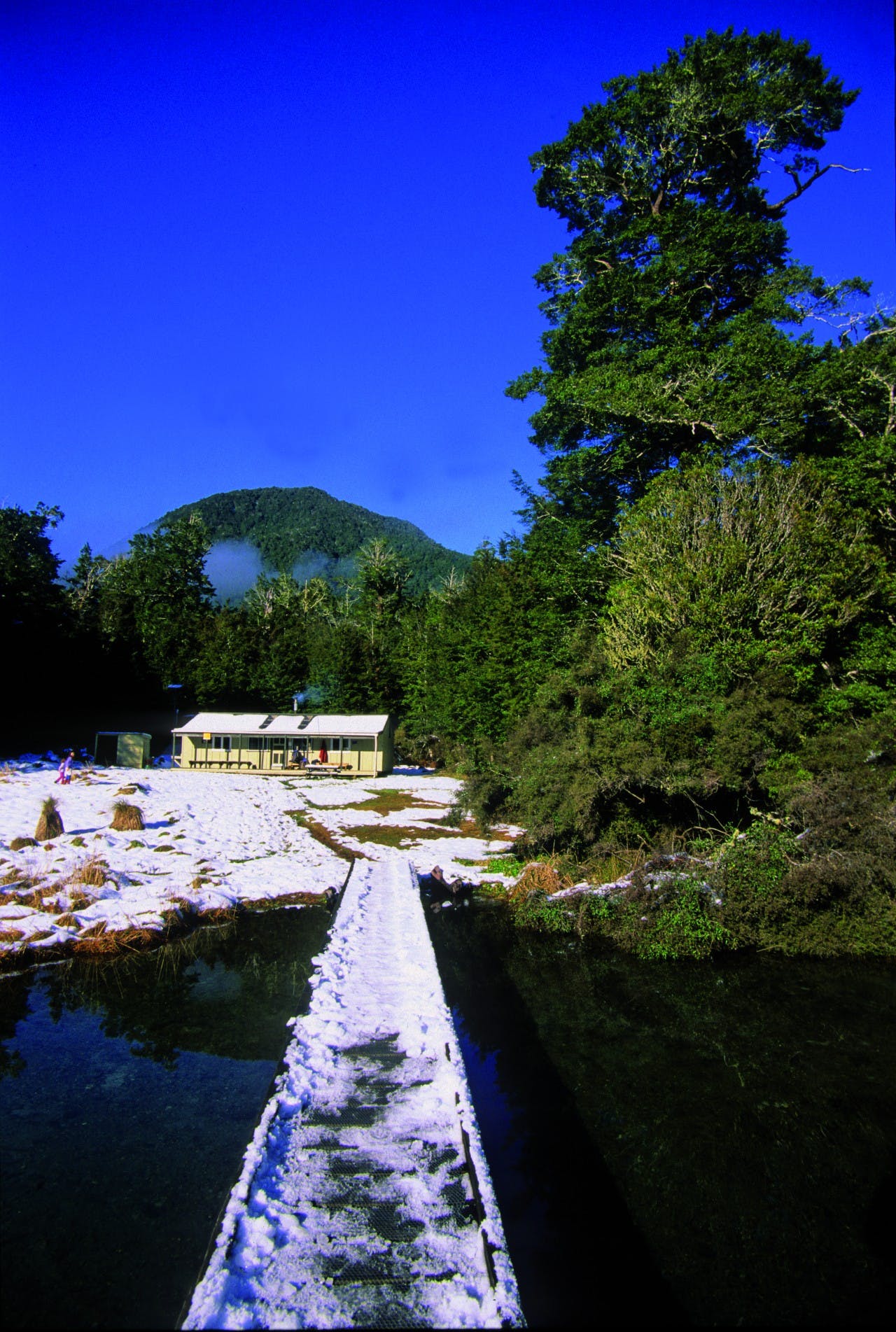 With low-altitude (topping out at 580m), an easy forest walking track, little elevation and a jewel of a lake, this trip makes for an ideal winter tramp in all conditions. Indeed, it’s a fine introduction to winter tramping for young families.

At Marble Hill Campsite, there is a concrete wall constructed in the 1960s, right on the Alpine Fault. It’s there to establish a datum for measuring displacement following seismic shifts.

The track is well-graded on the way to the bridge overlooking The Sluice Box. This is a serene spot, just the place to listen to the gin-clear waters of the Alfred River as it squeezes through a cleft in the greywacke rock.

A formed tramping track continues, with occasional tree-falls, one unbridged stream (in normal flow stepping stones avoid wet feet), many boardwalks and a bit of mud. The track is a gentle and steady climb of around 130m through dense beech forest, following the Alfred River. Troll Bridge is the halfway mark to Manson Nicholls Memorial Hut (24 bunks, serviced), where there is a jetty and a composting toilet.

The hut was built in 1976 by Christchurch Tramping Club and Lake Daniells Fishing Club members. It is named in honour of Phillip Nicholls and Brian and Sharon Manson, who were killed by a landslide in 1974 while sheltering in the old hut on the opposite side of the lake. A fourth member of the party – Bonna Beattie, managed to row and crawl to summon help, but it came too late.

Lake Daniell occupies a glacially-eroded hollow between the Alfred and Spenser ranges. It used to be called Lake Daniells, but the Geographic Board changed the name in 2007.