Pat Barrett has shared his love of the outdoors with his three daughters, including Dominique who has Down Syndrome – but this hasn’t prevented the Barretts from experiencing many of the Great Walks together

Sharing dinner with my family outside Abel Tasman’s Bark Bay Hut as kākā ‘kraaked’ in the trees above and a beautiful warm evening wrapped around us, I couldn’t help but reflect on the years-long journey that had helped us reach this point. Once again, we were sharing the excitement and adventure of another national park hike.

During the past four years, my family has embarked on a mission to experience some of the Great Walks together.

We are avid outdoors people who have camped, tramped and adventured with our three daughters Anna-Marie (22), Dominique (18) and Bernadette (16) since their earliest years. There is, however, a further dimension to our trips that requires careful management with attention to detail and practicality – Dominique has Down Syndrome.

People with Down Syndrome have 47 chromosomes instead of 46, which gives rise to a number of genetic and physical changes, notably small stature, often typical facial features such as small nose, ears, mouth and eyes, learning difficulties, heart conditions, diabetes, celiac disease, and low muscle tone which translates into a lack of stamina when exercising. As well as some of these conditions, Dominique also has sensory integration dysfunction. She is unable to filter out background noise and activity to focus on the job at hand. While she has mostly outgrown this issue, it has meant she cannot be expected, at least not yet, to complete a Great Walk carrying her own gear. But because we still want to enjoy the experience of these walks as a family, we have had to get creative to achieve our goal.

When the girls were young, it was easy. We would mostly go camping and if we did tramp to a hut, the little ones could be carried and the older ones could walk. Because Dominique is small for her age, I carried her until she was around 12.

But when it came to doing the Great Walks, which involve many kilometres of tramping over multiple days, we had to do some rethinking. We decided that my wife Christine, Anna-Marie and Bernadette would walk the entire track while Dominique and I would occupy ourselves – camping and 4WDriving. mostly – for the first few days and then walk to the last hut where we would meet the others and walk out together. We’ve done this for the Kepler and Abel Tasman Great Walks as well as the Greenstone-Caples Track. Dominique has managed the walks on all occasions, carrying her own gear and keeping up a good pace, sometimes competing with her sisters to get out first.

It’s not been without difficulty though. Hiking to Caples Hut, on the Greenstone-Caples Track, was a mission, as the track was challenging. By the time Dominique reached the hut – in five hours instead of the usual three – she was done-like-a-dinner. There was a fair bit of coaxing and encouraging along the way, though she was never carried.

We spent two nights at the hut so she could enjoy the beauty of the location while recovering for the walk out. Her sense of achievement and confidence after completing this trip was palpable.

While one of our priorities is for the hike to be manageable for Dominique, another is for it to be enjoyable for all. Hence our self-imposed limitations on just how far we might reasonably expect Dominique to walk while carrying her own gear. We have learnt from earlier tramps that if we are too ambitious, the wheels will fall off and the enjoyment level morphs rapidly into a let’s-get-out-of-here-fast situation. 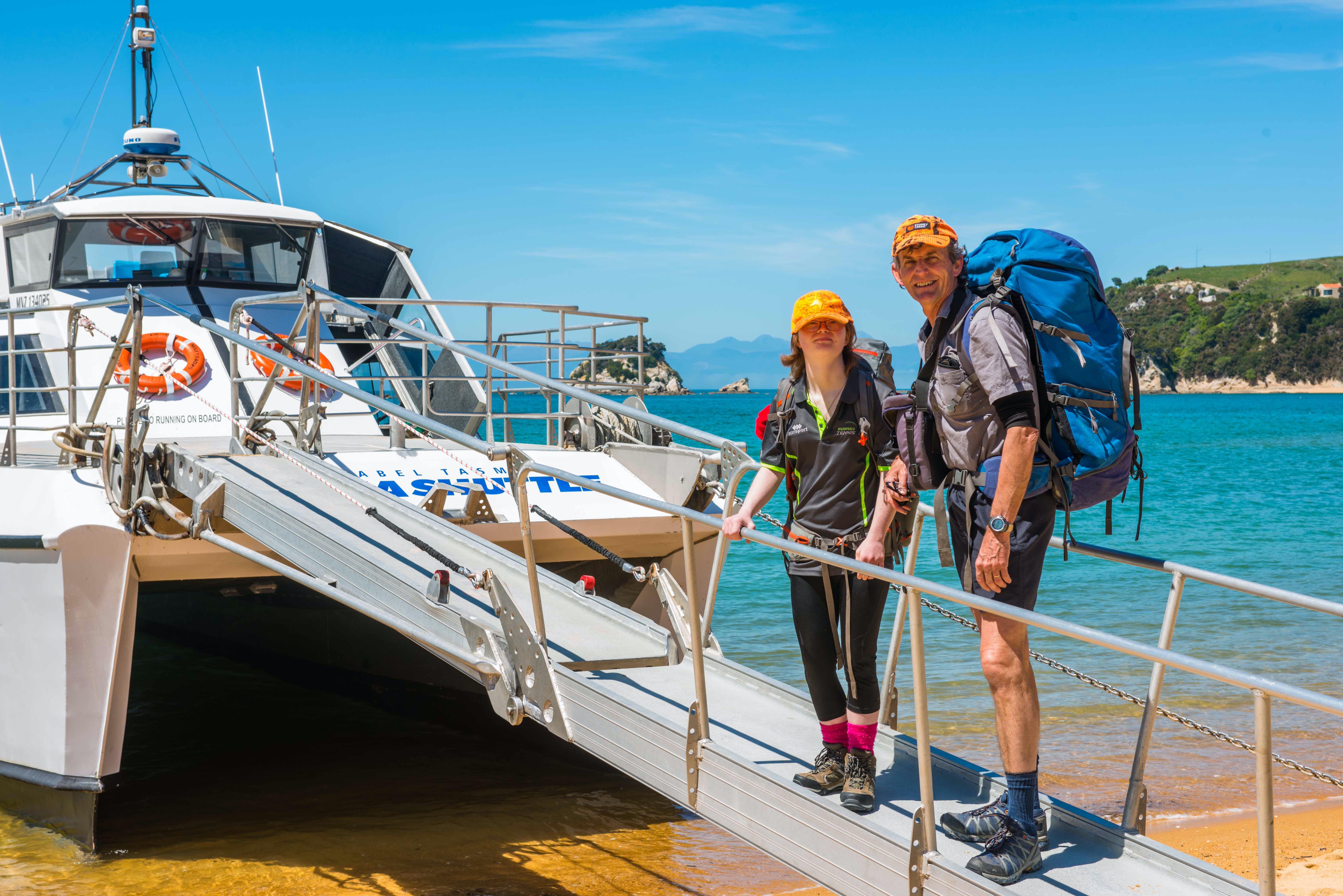 It takes time, patience, and a large dose of humility to accept that the normal for our family tramps is much different to that of most other family groups. But in working through these experiences, our family has developed a strong bond and a readiness to accept the limitations of others and move beyond achievement-based outdoor experiences.

The Abel Tasman Coast Track proved to be the perfect Great Walk for us to do. Water taxi services to many of the huts allowed Dominique to spend more time on the track than she normally would and without her getting overly exhausted.

While Christine and Bernadette set off from Marahau, bound for Anchorage and later Bark Bay, Dominique and I headed to Kaiteriteri where we boarded a sea-shuttle straight to Bark Bay Hut.

We made ourselves comfortable at the hut and enjoyed chatting with other walkers and being entertained by the crazy antics of the kākā that flew in each evening.

Most people with Down Syndrome can do almost anything the average person can, it just takes them longer. Acceptance, patience, and love are key, as is not overreacting when things go wrong. We have all been heartened by the comments of other walkers who have met Dominique and by their encouragement towards her and respect and interest they have shown. I know that for many of them, it has been a real education about people with special needs.

I had allowed two nights at Bark Bay so we could explore the area while we waited for Christine and Bernadette to catch up.

We spent a full day exploring little coves and the sandspit near the hut and walking to South Head to catch the stunning panorama over Tasman Bay. By the time the girls arrived, we were all set for the hike to Awaroa Hut.

For Dominique, this took five hours, which she found taxing on the high section which runs around the hillside above Venture Creek. I was impressed with her attitude – she carried her pack in humid conditions with no sign of the hut to motivate her.

After a night at Awaroa Hut, Chris and Bernadette walked to Totaranui where they would catch the sea-shuttle back to Marahau, while Dominique and I headed over to Awaroa Beach for the shuttle which left later that afternoon. As we waited on the sand, we chatted and reflected on our trips to date – the people, places, nature, huts and family, and most importantly to plan for next year’s Great Walk.

And when I asked Dominique about how she felt this trip had gone, she simply replied, “Great Dad!”, and her face transformed with a huge smile of satisfaction and confidence.