Mark Banham is a Wilderness columnist living in Queenstown 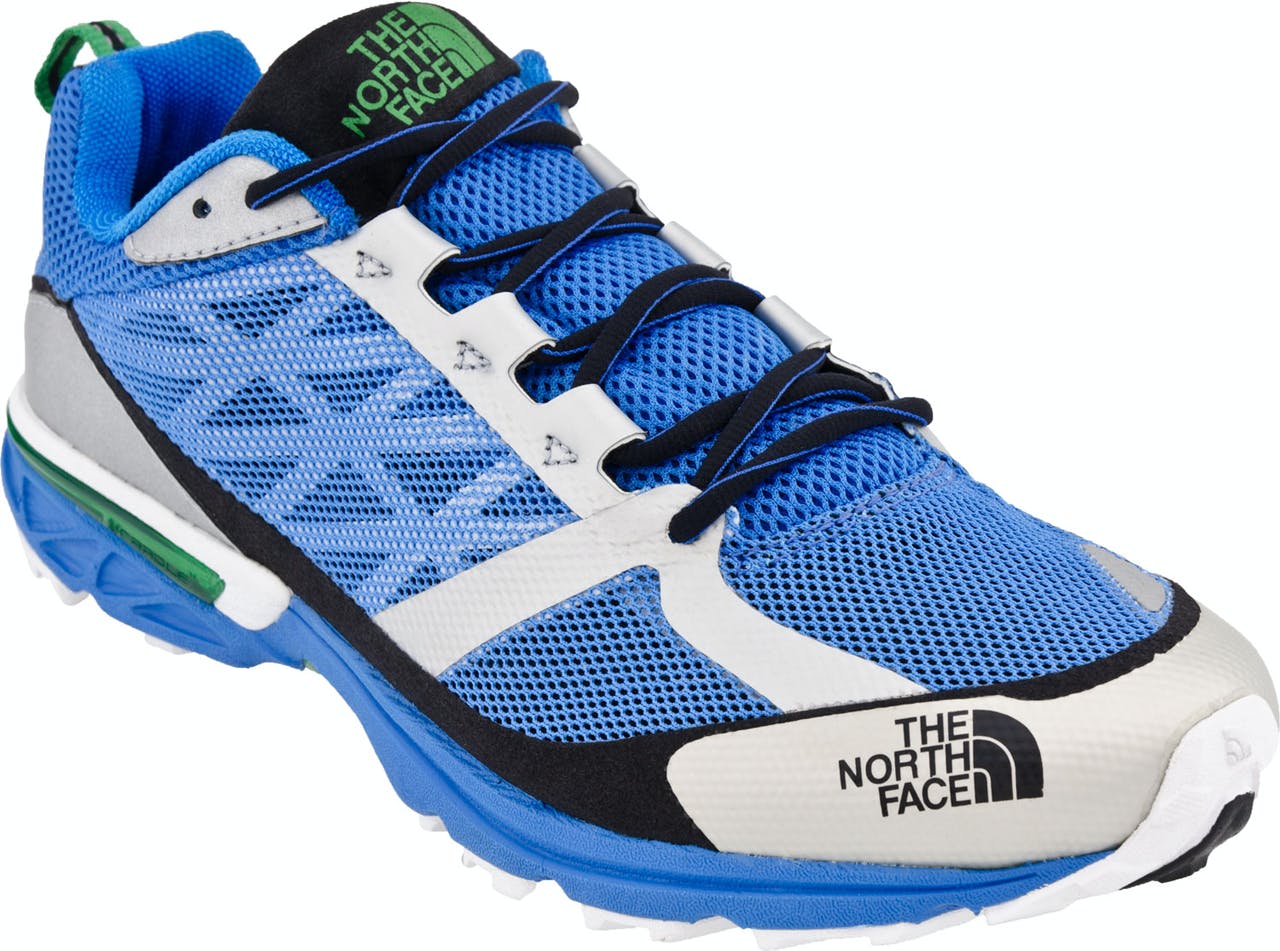 Right now there’s an ideological battle – a veritable design department brawl – going on between the minimalist and cushion-and-stabilise schools of thought in the running shoe industry. It seems, in the middle, saying “C’mon guys can’t we all be friends?” is the North Face with their Single-Track Hayasas.

These lightweight trail running shoes were co-designed by Japanese ultra-runner Tsuyoshi Kaburaki (hence their name, which comes from the Japanese for ‘speed’). At a glance they look vaguely retro with a low heel-rise, lightly cushioned design, but closer inspection reveals some nifty construction techniques like welded seams and an almost seamless inner.

The Hayasa’s sales rhetoric draws from both ideologies. On one hand, TNF talk about the ‘sensitive, close-to-trail ride’ and ‘neutral, low profile midsoles’ but then in the next breath waxes lyrical about the ‘Ortholite’ cushioning and ‘Heal [sic] Cradle’ technology.

Depending on your point of view you could say they’re an elegant compromise – or an unholy union between incompatible ideas. But really, the only way to know for sure is to lace ‘em up and hit the trail.

With that in mind I gave the Hayasas a thorough thrashing for this field test. They saw everything from interval training sessions at the local school oval to a muddy 33km run of the Routeburn Track. I have to say I was genuinely impressed with how well they performed.

The first thing I noticed is they’re light at 468g for a set – that’s 200g lighter than my current runners – which means over a marathon distance I’d be picking up something like five tonnes less shoe! They’re also super comfortable with virtually no interior seams so you can easily get away with going sock-free for shorter runs, but they still have just enough cushioning to carry you through the longer distances and rougher terrain.

Having said that, the Hayasas aren’t for everyone – their feather-light design and good ‘trail feel’ necessitates a lack of pronation control and cushioning. On the right feet they’ll let you go further and faster – but on the wrong ones and the only place you’ll be going fast, is down to the local physio.

On the whole a great job by The North Face. 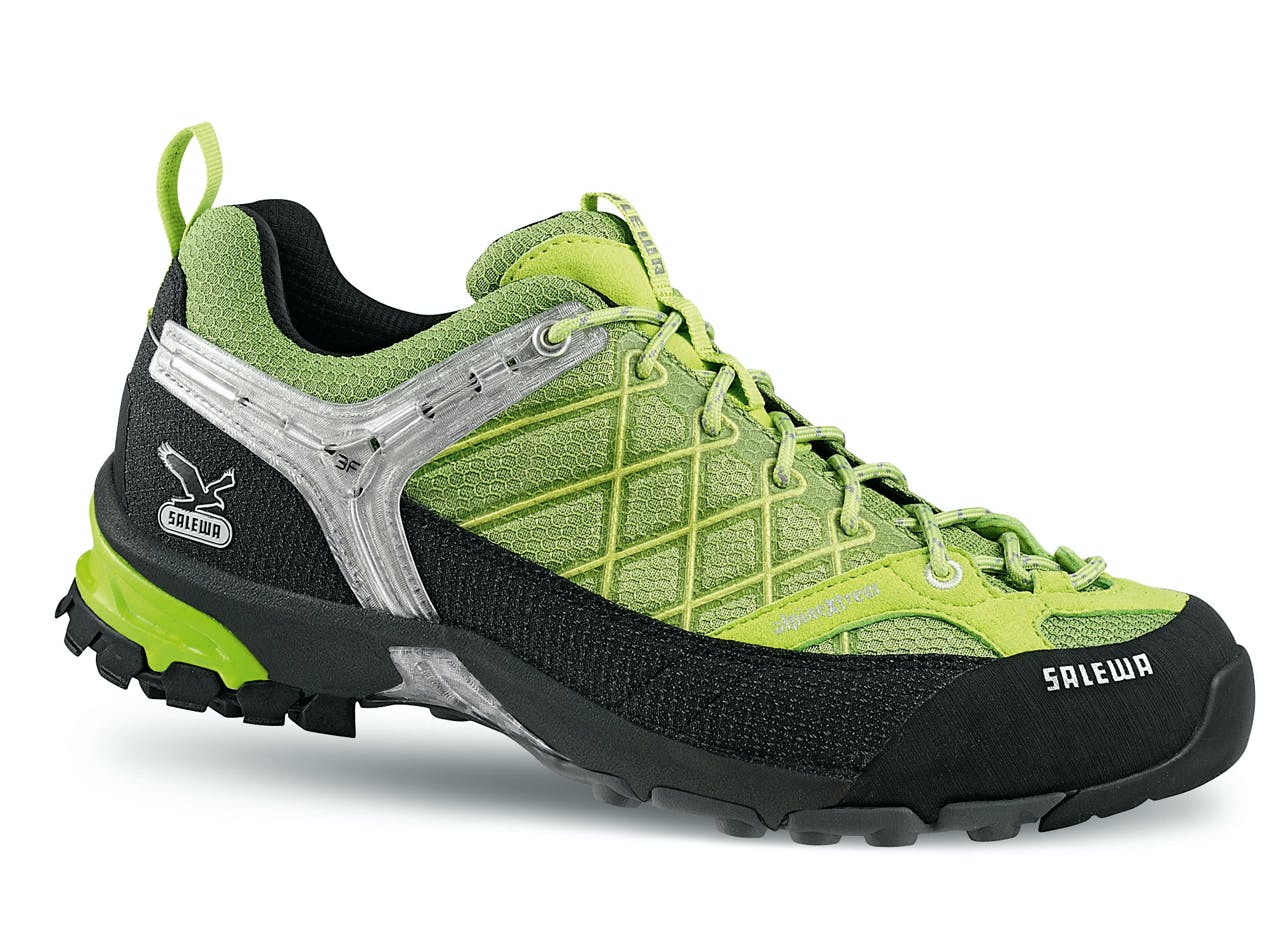 Salewa’s Firetail trail shoe tries to be everything to everyone – and succeeds. It is billed as the ‘first link between the comfort and lightness of trail runners with the technical features of an alpine approach shoe’. So it should suit runners and those walking trails equally.

Since getting them a few weeks ago I’ve had a chance to test their mettle on a few trail runs on gnarly tracks in the Waitakere Ranges. Wearing the Firetails for the first time, I ran the Nihotupu Ridge Track with ultra runner Vicki Woolley who said it’s one of the toughest tracks in the ranges. Networks of slippery roots crisscross the track, as well as rocks and other hazards, but despite all the challenging foot work required I didn’t, and still haven’t, had any blisters, real hotspots or felt any stability issues.

The Firetails are seriously robust and appear to be made to take a thrashing. They have a stiff, moulded plastic exo-skeleton which is fixed to a stiff heel cup and, combined with the 3F lacing system, is designed to lock feet in place and provide extra stability. With a chunky rubber rand, they also give good protection.

The Gore-Tex liner kept my feet dry after running through puddles and small streams, though in the summer on a long trail run this might make them a little too warm. They have Vibram sticky rubber dot soles that provide good grip on most trail surfaces, except the most slippery rocks. I’ve run down some steep sections in them and felt confident, but for my local terrain – clay, mud, up and down scrambles –  I would prefer to see more sharp-edged lugs to compliment the round circular mounds that make up the majority of the outersole.

My toes have plenty of room in them, but the shoes still feel tight fitting which they need to be when moving quickly over uneven terrain. However, at 410g the Firetails are slightly heavier than many other trail runners which usually weigh in between 300g to 350g.

Overall, these are excellent approach or trail running shoes that will go the distance through rough terrain. 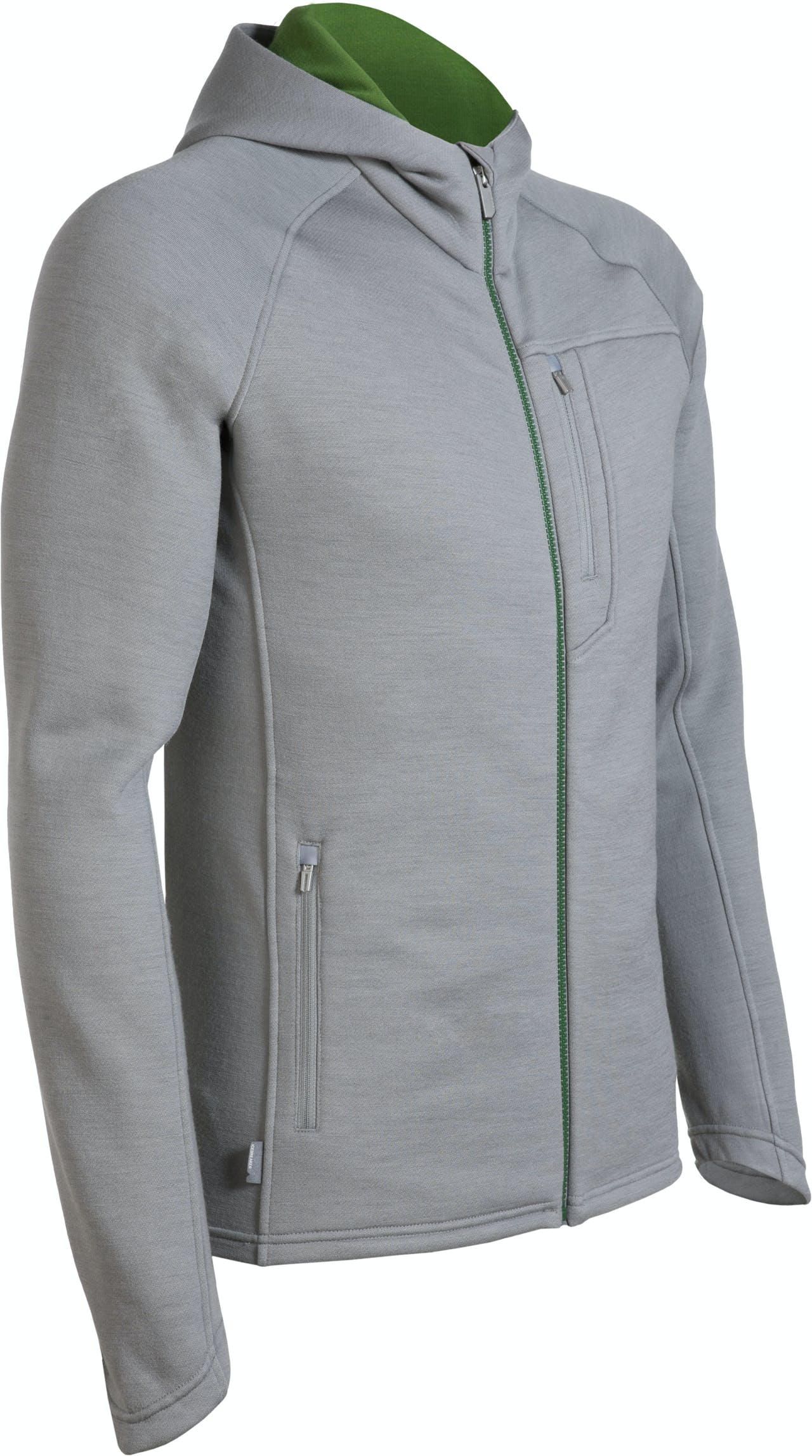 Every season clothing and gear manufacturers try to outdo one another with ever greater innovations. Few areas of outdoor gear are more competitive than in the apparel segment. Gore-Tex became a household name because it created a fabric that not only repelled water, but helped move moisture (i.e. sweat) from the inside to the outside.

Icebreaker became synonymous with merino wool after Sir Peter Blake gave a glowing reference. Wearing his Icebreaker thermals for weeks at a time while sailing the world’s oceans he loved the fact he didn’t need to wash them thanks to merino’s natural odour-fighting properties. A hairy little sheep called Shrek helped a bit too.

But Icebreaker hasn’t traditionally been at the fore of fabric innovation. It hasn’t needed to produce something new every couple of years like Gore-Tex to keep the competition at bay. But these days practically every outdoor company has a line of merino products in its arsenal. Perhaps that’s why Icebreaker has created this water-resistant merino jacket.

The Kodiak mixes human ingenuity with naturally grown merino wool. The science stuff comes in the form of microscopic nano particles which have been applied to the merino. The particles have a ridged surface that reduces contact area and increases resistance to abrasions so water runs off, rather than soaks through.

So far I’ve worn this jacket almost everywhere – to work, on bush walks and even while house-hunting. It looks good, fits well and keeps me toasty warm.
I tested the Kodiak in some pretty heavy downpours and was impressed by its ability to repel water. Water formed droplets on the jacket and didn’t soak through. I also liked the hood which I could pull up on cold days, and the heavyweight fabric, aided no doubt by the nano particles, helped keep the wind out – though it should be noted it’s not windproof. As far as fleece jackets go, this is the best and most comfortable I’ve ever worn.
It’s well-constructed with solid stitching and hard-wearing zips with garages.
I do think the price is quite steep, though in my experience Icebreaker makes premium products that are built to last and if it’s a versatile fleece you’re after for outdoor adventures and after work drinks, this has to be the pick of the bunch. 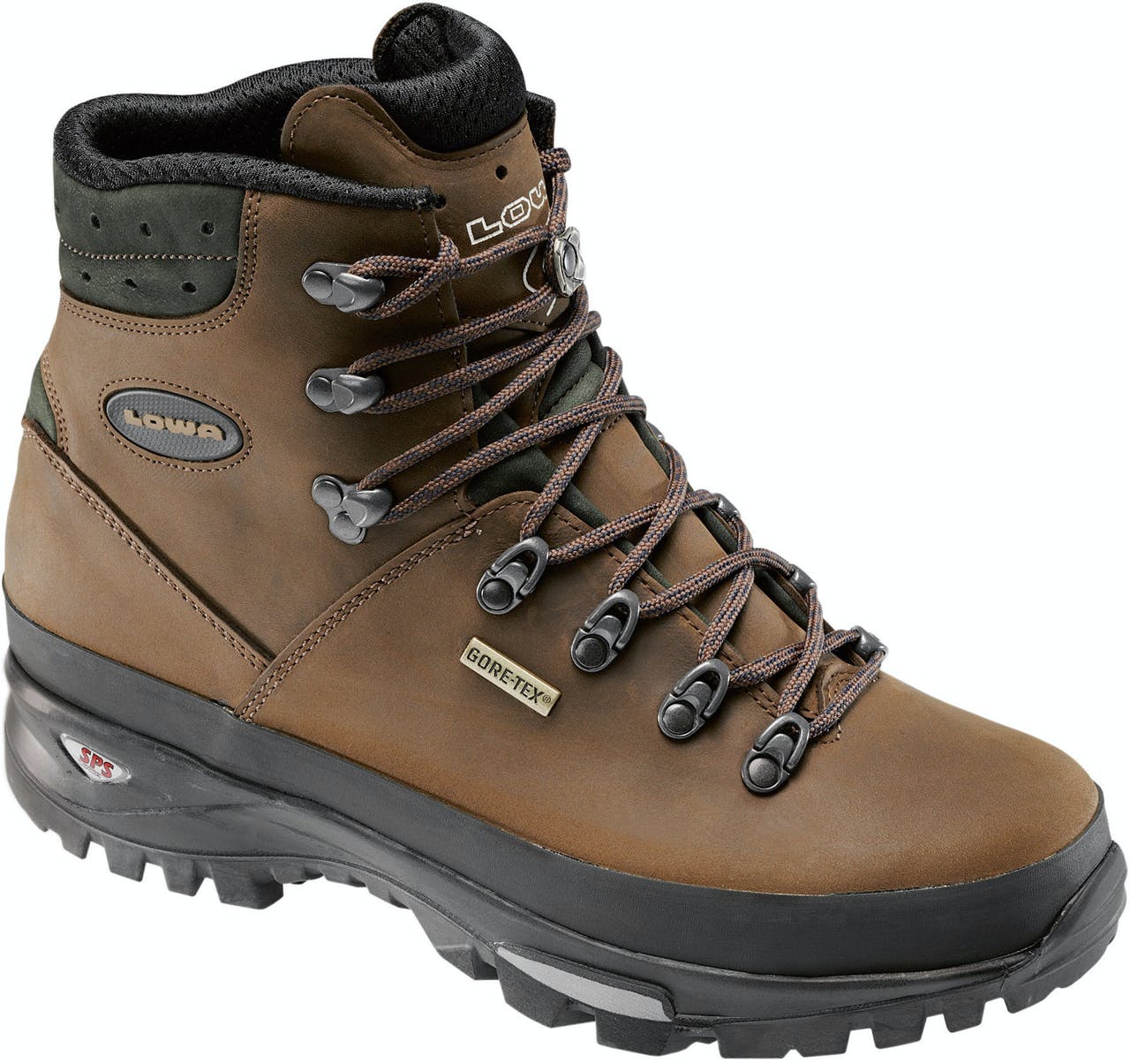 When I purchased my first pair of tramping boots I made the mistake of buying according to price. By saving money I wound up paying a much greater price; on my first two tramps in them a lug and three lace rivets ripped out and due to a lack of adequate padding the collars dug into my ankles causing such pain I had to go barefoot.

The Lowa Rangers are at the upper end of the price scale for tramping boots, but on a trip around Lake Waikaremoana I discovered the old adage ‘you get what you pay’ for is true.

On my four day tramp around the misty lake I didn’t get any blisters or experience any problems. The track was wet and muddy and I intentionally walked through the worst of it and at the end my feet were warm and dry.

The Lowa Rangers’ outer is entirely made of water repellent Nubuck leather. They have a Gore-Tex lining and a smooth and snug cloth interior. I found the Vibram outsoles offered excellent grip and the ankle support saved me from injury a couple of times.

Compared to my previous tramping boots, the collar on the Rangers was soft and comfortable, but also solidly made. On the inside, I found the toe box roomy, but the insole too thin and hard so I’ll invest in a good insoles before the next big trip.

For the quality of material, these boots felt surprisingly light and I was confident to bound over rocks and logs.

The Rangers are, however, suited for on-track trips rather than long off-track forays into the wilderness. Being more flexible underfoot, they’re designed for those who carry medium weight loads, too.

These boots will excel on all backcountry tracks and I believe they can handle a fair amount of off-track with the right pack weight. They do have a good rand to protect the leather uppers from some scrapes and scratches, but for off-track trips, especially in rocky terrain, a slightly higher rand would be better.