Since the beginning of the 20th Century, overseas visitors and New Zealanders have been drawn to the Copland Valley, near Fox Glacier in Te Wahipounamu/South-West New Zealand World Heritage Area. The Copland Valley is known for both its alpine vistas and the ‘crock pot factor’ of the Welcome Flat hot pools. Today, more than 4000 visitors make the 18km hike into Welcome Flat Hut, with its flush toilets, running water and three hot pools. Around 80 of the annual visitors are alpinists, who with the aid of technical climbing equipment conquer the Copland Pass or use Scott Creek as access to Mt Sefton and the North Ridge of Aoraki/Mt Cook.

Sally Jackson, the author of Hot Pools of New Zealand and the Copland Valley Volunteer Hut Warden Co-ordinator for the Department of Conservation, is passionate about all things ‘Copland’. Sally explains that the first hut was built at Welcome Flat in 1913 as part of a grand track project that was intended to link the West Coast and the Hermitage.

A new hut was built in 1986 but disaster struck 13 weeks later when both huts were hit by a mud slide in the middle of the night. Sally says although the 12 trampers sleeping upstairs in the new hut escaped unharmed, the warden only narrowly escaped by climbing through a window moments before his quarters were swept into the Copland River. The new hut, although bathed in mud, was largely unharmed, and DOC, aided by the New Zealand Army, relocated the hut to its current site and created today’s wardens quarters which are tucked into the South West corner of the new hut.

Welcome Flat also offers camping opportunities within a few minutes walk from the hut. The main campsite – which was a deer recovery airstrip in the 1930s – provides a panorama of the Sierra Range, dominated by Mt Sefton and Scott Peak. The Rock Biv, a natural rock shelter, is another sought-after campsite.

The prime drawcard for visitors to Welcome Flat is the hot pools, which are within a few minutes walk from the hut. There are three pools that are highly mineralized: a mixture of organic matter, algae and iron minerals has slowly created the travertine orange mounds that surround the pools. Charlie Douglas, Alf Dale and Rob Ward discovered the hot pools in 1901. The trio was ‘forced’ to drink a bottle of whiskey so they had a bottle in which to collect a water sample to be taken back to the Department of Lands and Survey. 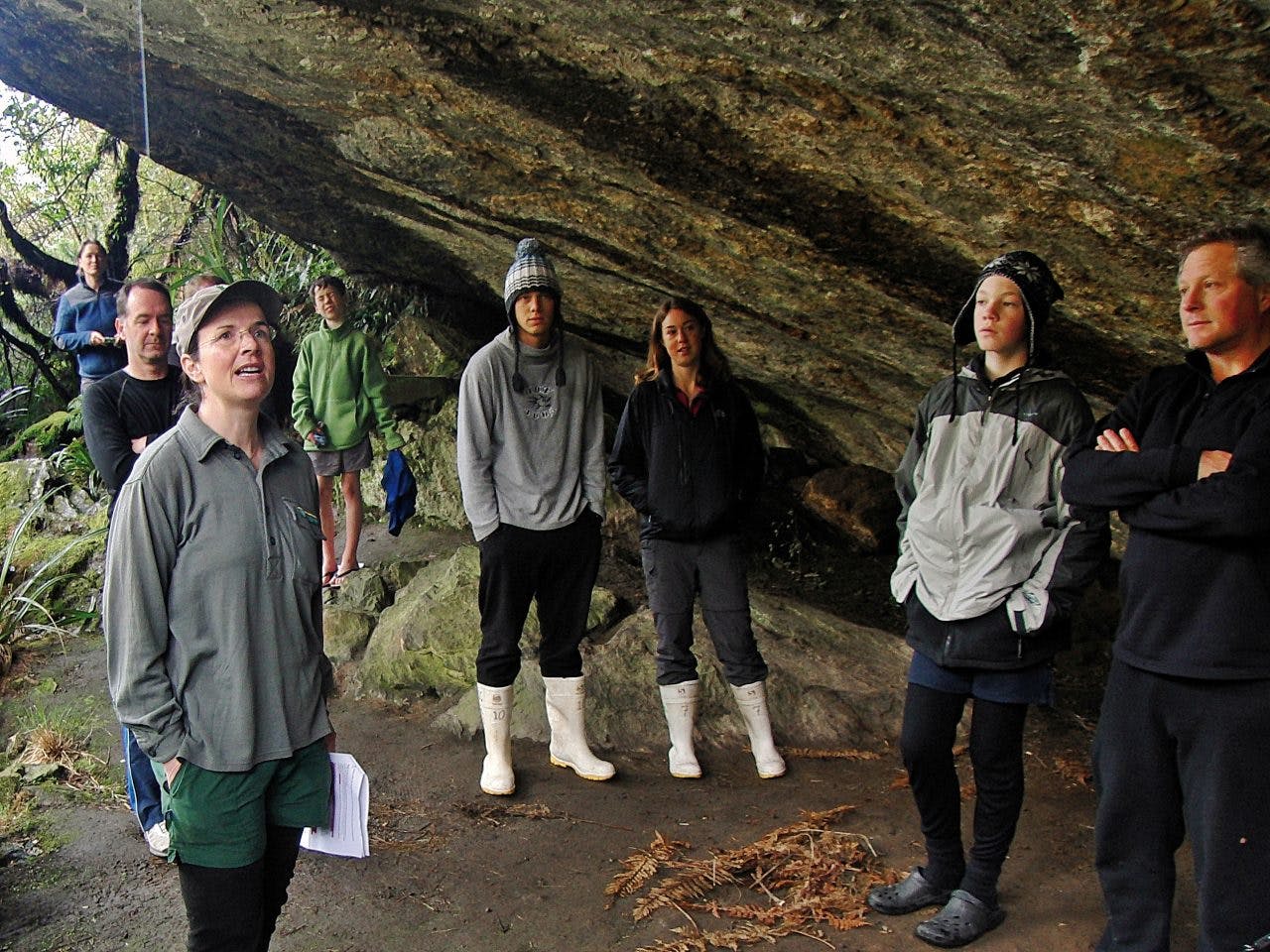 Sally explains the dynamics of the Alpine Fault and the creation of the hot water: cold water seeps through the cracks and crevices deep underground, boils in the heat generated by tectonic pressure, and returns to the earth’s surface. The source pool appears to boil as underground gases escape, yet its temperature stays a cosy 57°C.

The source pool is closely monitored by GNS scientists from Dunedin who use electronic equipment to take temperature readings every 30 minutes. Since the Canterbury earthquake in September, the temperature has dropped by one degree, to 56°C. The same drop in temperature was also recorded after the 2010 Fiordland earthquake. Scientists are intrigued by this temperature variation and are yet to discover a definitive answer as to why it has happened.

The Copland Valley, located within the Westland Tai Poutini National Park, is a place of significance to Te Runanga o Makawhio. Terry Scott, who is part of this tribe has conducted research into Makawhio’s ancestral exploration of the area. According to legend, an elderly woman, Ohinetamatea, her two sons and their wives were searching for food in the Karangarua Valley when they followed a well fed tui into the Copland Valley. The tui led them up a ridge line kakapo trail to Welcome Flat, and the Copland Pass. Within sight of Aoraki/Mt Cook, a rainbow appeared at the foot of the Copland Pass, and a karakia or prayer was said just before Ohinetamatea died. Exactly what caused her death remains unknown. However, her family continued over the pass and later returned to the West Coast to settle in Okarito and Bruce Bay. In 1892, George J. Roberts (1848-1910), an early West Coast surveyor, recorded the story and noted that the bird life in the valley was still well fed.

In 1908 the Government decided to investigate the feasibility of various tourist operations in the Copland Valley, including a railway and tunnel through to Mt Cook Village. Both Charlie Douglas (1840-1916) and Arthur P Harper (1865-1955) surveyed the area and returned unfavourable reports. Harper stressed in his report that any track above the snowline would require ‘tremendous work’ and would need ‘extensive masonry’ as the harsh winters would otherwise ‘obliterate’ the endeavour. 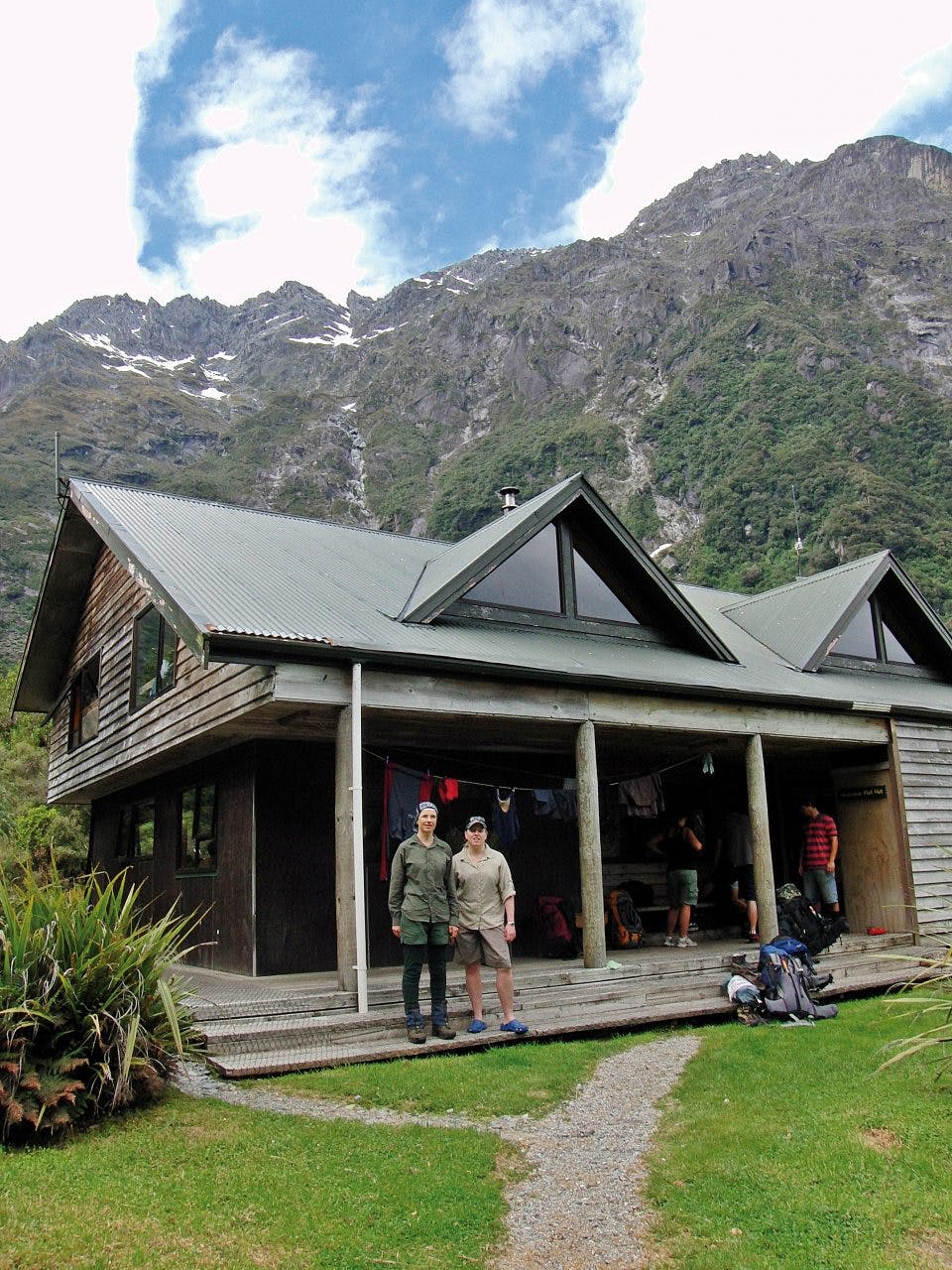 Ignoring these reports, the Government offered the contract to build the track to the Graham brothers of Franz Josef. The brothers Butler and Mark Te Koeti and their nephew George Bannister of Bruce Bay Mahitahi (Terry Scott’s relations), were employed to work on the track which was to be the same width as a donkey with two saddle bags. The workers started with little more than a blazed trail, and used explosives to blast through the bluffs in the lower valley. Eventually it was possible to ride a horse right to Douglas Rock Hut, which is three hours walk beyond Welcome Flat Hut. The brothers helped build the original hut, using pit saws which were carried in on horseback, and cut the totara piles that were used in the original Copland Bridge.

Alpinists, or ‘Alpine lunatics’ as Charlie called them, were mesmerised by the Copland Valley in the 19th Century. Mattais Zubriggen of Switzerland and Edward FitzGerald from London were overseas guides working out of The Hermitage at Mt Cook when they completed the first east to west crossing of the Southern Alps in February 1895. They had a party on the Copland Pass and ate most of their food supply, thinking that they would be in civilisation early the next day. Unfortunately, the West Coast podocarp forest proved to be an unforgiving entanglement. One of the climbers got so caught up in supplejack that it took over 15 minutes and some seriously foul language to cut him out.

Nearly three days later the climbers arrived at Scott’s homestead in the Karangarua Valley where they met Charlie and Harper. As Sally suggests, “you can imagine that after all his exploring and surveying, [Harper] was a ‘bit gutted’ that he had been beaten to the first crossing.” Harper successfully completed the crossing two weeks later.

Terry Scott believes that “if it wasn’t Ohinematatea, it must have been one of her daughters-in-laws who took the honour of being the first woman.” The first crossing made by a European woman occurred on April 4, 1902. The head guide from The Hermitage, Jack Clark, and Peter Graham led Mrs Thompson and Miss Perkins of Greymouth and Miss Bandicot from London over the Pass.

This account is only a snapshot of the many stories of the Copland Valley. Hopefully, the retelling of history will inspire future generations to get into New Zealand’s backcountry, and experience the hot pools concealed from those who only travel the State Highway.