“We used existing tracks in the first year just to get it started, marking a route along farm tracks,” says Francis Helps, whose family has farmed there for generations. “We learned as we went. We altered the route to improve it and at the same time, we cut routes through places where there had never been a track before.

“In our first season, about 300 walked the trail and it grew like topsy from there.”

While it may still lack the fame of some DOC trails, about 2000 people now walk the Banks Track each season.

After 27 years, a new section of trail was unveiled in October 2017 following the retirement of one of the properties. The revised 31km trail first crosses the rim of an extinct volcano and then skirts around the coast before passing through forest and re-crossing the crater rim. 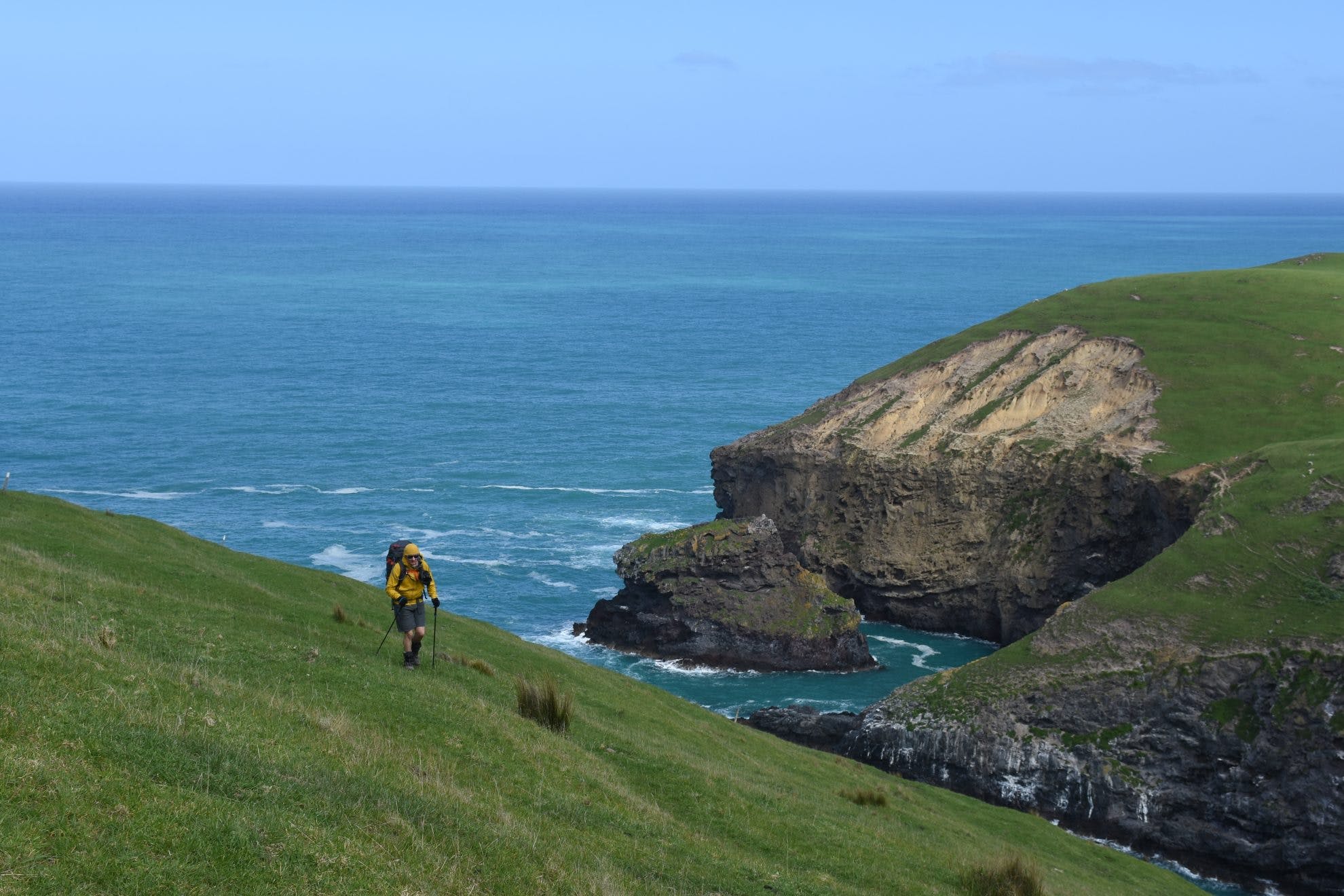 There are options to walk the track over two or three days. The number of walkers is strictly limited to minimise the impact on the landscape and ensure walkers never feel crowded. At any time, a maximum of 12 three-day hikers and four two-day hikers are on the track.

Opting for the three-day version, my partner and I began our journey from Akaroa with a short transfer by van to the first night’s accommodation at Ōnuku Hostel.

The following morning, we set out on the first leg, an 11km trail from Ōnuku to Flea Bay. The trail began with a steady climb over farmland, with views of the stunning Akaroa Harbour – the crater of an ancient volcano flooded by the sea. Its calm surface was like dark blue glass.

We soon reached our first point of interest; the ruins of an old dairy and colonial house known as Paradise. We continued the climb to Trigg GG, the highest point on the track at 699m where we could see all the way to the Southern Alps 200km away.

After descending through farmland there was a dramatic change in landscape as we entered a beautiful beech forest and began a steep three-kilometre descent. Within the forest, a huge 400-year-old red beech stood amongst the thick green ferns. The way was dotted by bridges and waterfalls.

It’s difficult to imagine this near-pristine forest is someone’s home; it felt as if we were in the heart of a national park. Within the Helps family’s 600ha sheep and cattle farm, the beech forest, known as Tutakākāhikura, has been gifted to New Zealand. A covenant under the Queen Elizabeth II Trust protects adjoining land in perpetuity from being developed or cleared. It is a great highlight of the Banks Track.

At Flea Bay there is a marine reserve supporting the largest colony of little blue penguins on the mainland. At last count in 2016, there were 1300 breeding pairs. The Helps family has installed around 300 nesting boxes, partly funded by donations from walkers. They also run an ecotourism business providing tours to view the penguins.

The second section of the track is just eight kilometres to Stony Bay. This section has some glorious sea and coastal views. The endless sea views and secluded bays, rolling hills and tranquillity made it an instant favourite for me. 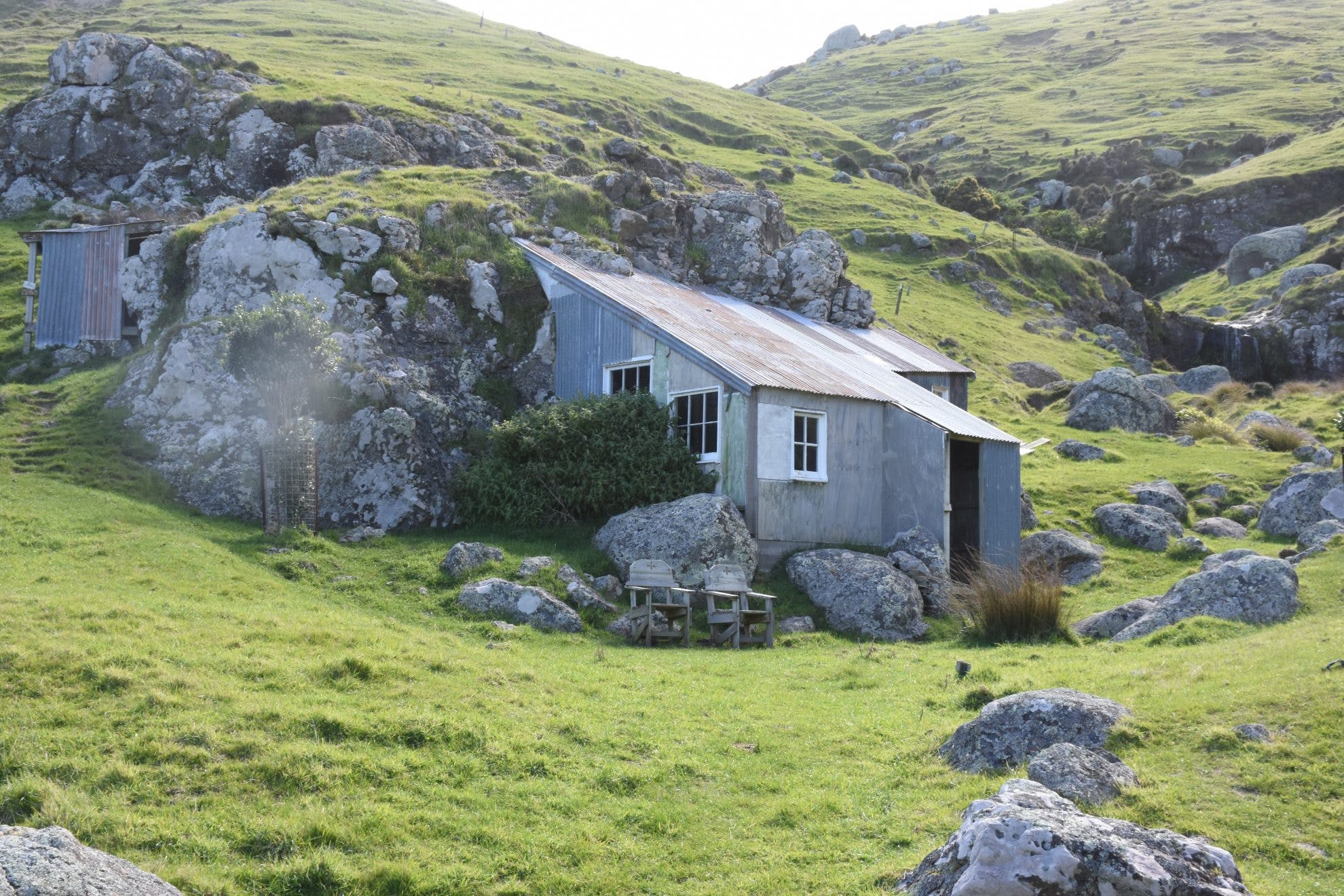 For much of the day, we walked along exposed cliff tops overlooking the dramatic coast. Signs have been placed along the track to prompt walkers to look up and take in the best views. One directed us to an island nook that’s been carved off the mainland by erosion. We could see right through the middle. In the distance stood the 200m high cliffs of Dyke Head.

Descending, we discovered a wonderful shelter built into the rock face. This unique rest stop was created by landowners Mark and Sonia Armstrong.

“Mark is a very creative person and he designed and built it,” says Sonia. “It is an amazing work of love. He made sure the rock was OK, used plugs to secure gaps and he walked things in on trolleys.”

From inside this whimsical rock and timber hut, we enjoyed more striking sea views. Just metres away, a group of New Zealand fur seals lazed in a cave.

Soon after, we reach the site of Canterbury’s last colony of sooty shearwaters, also known as mutton birds or tītī, and an impressive feat of engineering put in place to protect them.

The colony had almost been wiped out by pests when the Armstrongs stepped in to help. They improvised the first predator-proof fence using chicken wire in 1998. It was replaced in 2010 with an impenetrable wire mesh fence. The fencers had to take abseiling lessons before they could install it on the cliff. Their determined effort has helped bring the colony back from the edge of local extinction. It continues to recover.

Just before reaching Stony Bay, a short detour along the cliff reaches No Albatross Point where we spent time watching seals and listening to the water crash over rocks.

Our accommodation was a rustic cabin at Stony Bay where an honesty shop stocks fresh food and groceries. A quirky bathroom has a shower with a tree growing right through it. There’s also an outdoor wood-heated bathtub, perfect for soothing aching muscles. 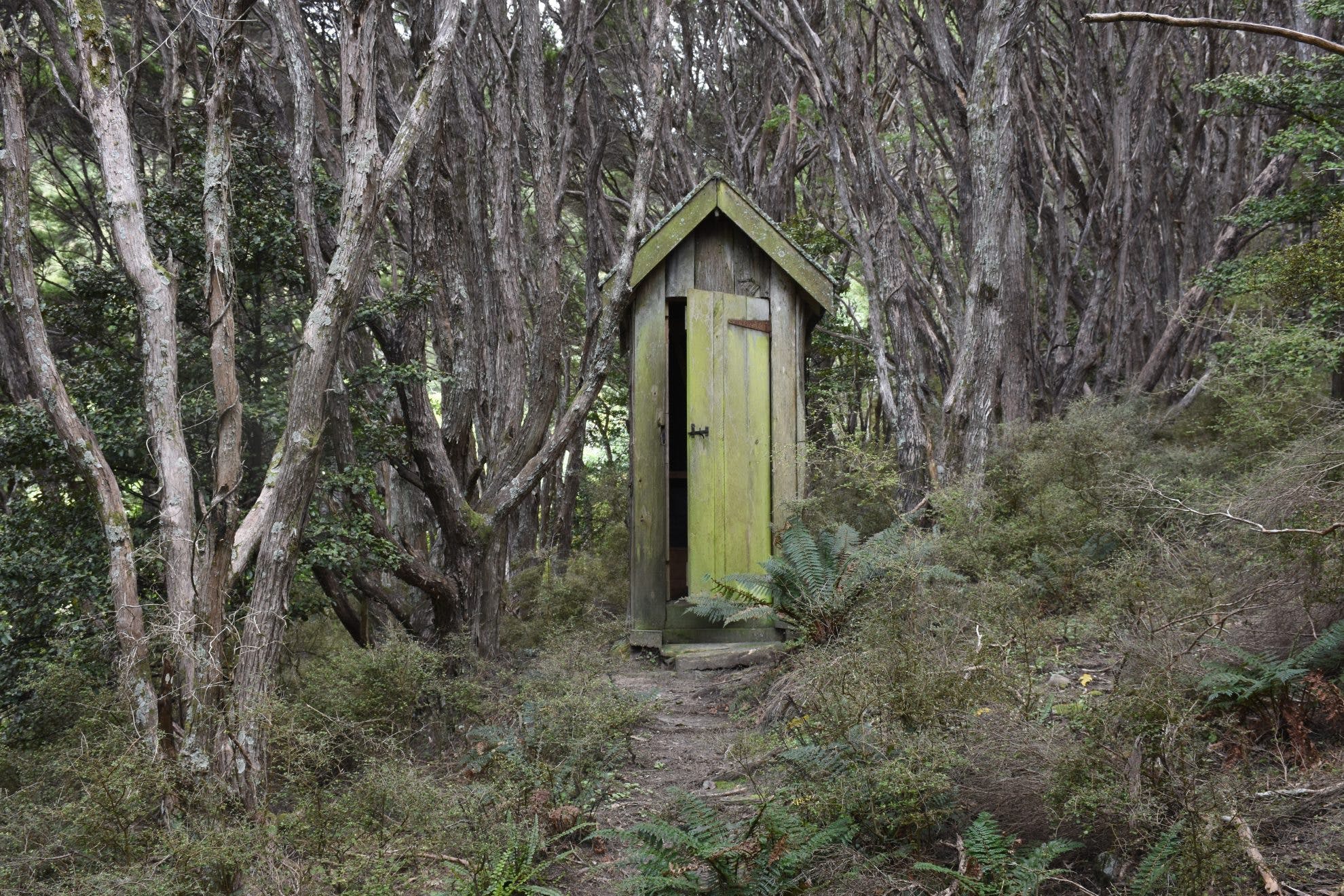 A loo with a view. Photo: Louise Reynolds

The final day, a 12km section from Stony Bay returning to Akaroa, was over the new section of trail constructed last year. From the shore of Stony Bay, the track turned inland, heading west up Stony Bay Valley. The first 1.5km of the new Ōpātuti Track follows a stream on the Armstrong farm until it meets the boundary of Hinewai Reserve. Hinewai has always been part of the Banks Track.

The track now crosses the south-east corner of the reserve, climbing steeply through regenerating bush and tall beech trees. A lookout over Mamaku Gully provides views of rare mamaku tree ferns – New Zealand’s largest tree ferns which can stand up to 10m tall.

All up, the trail climbs 690m from near sea level at Stony Bay. Finally, we came out of the forest into scrub and tussock and on to the pleasantly flat Tara Track. The effort of the climb was rewarded with a beautiful view all the way back to Stony Bay and the surrounding hills. Much of the landscape is blanketed with yellow gorse that fills the air with a scent like coconut.

The trail didn’t remain flat for long and soon plunged downhill on its return to Akaroa. On the way down, we found Hugh Wilson, who still manages the reserve he created all those years ago, busily painting marker posts. Just a few days after the new track opened there were still some finishing touches to be made.

“How did you find it?” he asked. “We were worried we had made it a bit too steep for people.”

“A little tough but manageable,” was my verdict. “Not too steep and worth it for those views. In fact, I loved it.”