Access
North from Dunedin on SH1, take a left on to Waitati Valley Rd

One of the (many) great things about living in Dunedin is that you never have to go far to find somewhere good for a walk. On a Sunday morning, with a raging nor’wester and temperatures in the 30s predicted, I’m looking for a short drive, accessible water and some shade towards the end of the trip. Being neither a mad dog nor an Englishman, I want to be finished by midday, but I still want a view and a trip that would leave me feeling like I’d had some exercise. 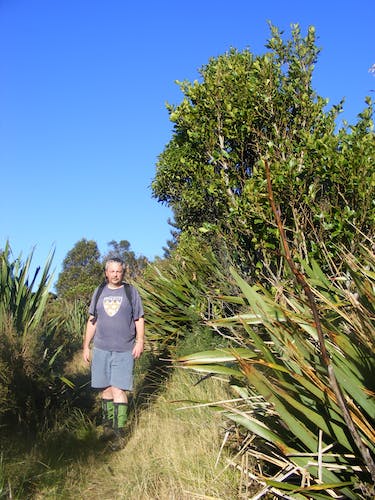 I choose to take the Burns Saddle Track, climb onto Swampy Summit and return via Rustler’s Ridge. Parking at the top of the Northern Motorway, I head down Waitati Valley Rd until I reach a gate with a faded ‘No access – water catchment area’ sign. The sign is years out of date, and there’s a track past the gate. It leads to a bridge and then follows a pipeline for 15 minutes before a sign marks the turn-off to Burns Saddle. This track was one of the main routes I used to get to the Silver Peaks as a teenager. When Dad figured out that running us a mere 10km up the motorway made a lot more sense than the 30km involving a steep rutted road to Hightop, the main access point to the range, he showed us the then-unmarked and obscure route he’d used as a teenager. These days, the main junctions are signposted and the routes, although largely unmarked, are easily followed.

This area is well placed to catch the fog that often accompanies the prevailing nor’easters. A nearby track is called Cloud Forests of Leith, for good reason. So it follows that the climb to bushline is a muddy one. The bushline has crept up over the years and is a testament to the ability of native vegetation to subvert gorse. At a spot where I vividly recall having to crawl under gorse 30 years ago, there’s now a good five minutes of pleasant forest walking to go.

A stroll along a scrubby ridge brings me to the descent to Burns Creek and a welcome top-up of my water bottle. Then it’s a sharp climb up a rutted and slippery track to the saddle. Signs indicate that it’s a junction of four routes, and I’ll have used them all by the end of my trip. I choose to get the rest of the climbing out of the way, as the day is clearly going to keep getting hotter.

The track goes straight up the hill, with the gradient easing as I approach the plateau of Swampy Summit. There’s a variety of communication installations on this hill, so an access road traverses the top. Turning right, I reach the northern end of the plateau. This offers a great view across the head of Silver Stream to the Silver Peaks, and has long been a good spot to stop and admire the area. From there, the descent of the Swampy Ridge Track, initially sharp, brings me back to the Burns Saddle Track.

Heavy overnight rain had all the streams running high, so it was easy to refill my water bottle at Ferguson Creek. After a short climb through manuka, the track levels off somewhat and heads for the saddle. I note that the gorse is getting away here. It’s still easily passable, but I wish I‘d brought secateurs to make a pre-emptive strike.

Back at the saddle, I turn left, climbing briefly before beginning the long descent of Rustlers Ridge.

The views over Blueskin Bay are great. Before long, I’m back in the bush and pleased to have some respite from the fierce heat of the sun. The downside is that it’s the height of the seeding season for the plentiful hook grass, and I regret my choice of short gaiters instead of long ones.

Soon, I’ve slithered down the last slopes to rejoin the Pipeline Track as it sidles back to complete my loop. This section often seems to take longer than expected but eventually I cross Burns Creek at an intake structure and shortly after I’m back at the car, 10-minutes ahead of schedule.