We promise we haven’t just included Rangitoto because of its proximity to Auckland. It’s picked because it’s such a different experience to any other peak you’re likely to climb in New Zealand.

Being such a young volcano (there’s a bit of debate over its actual age, but between 700-900 years old seems a safe bet) the rock which spewed from the summit crater still looks like black rubble, or crushed Oreo biscuit. It’s alarmingly unstable if you try to walk across it and would quickly destroy the soles of your boots.

The tracks that have been built here make the hill an easy climb and the Coastal Track heading east towards Motutapu Island makes an interesting around-walk.

The lava caves close to the summit are a great distraction (bring a torch) and the views from the summit are far-reaching, as Rangitoto is the highest peak in the vicinity.

Crossing the water from Devonport or Auckland City adds to the experience and turns the trip into a full-day event.

Arthur’s Pass National Park’s landmark summit is Mt Rolleston, though it’s not the highest (that’s Mt Murchison, 2408m). It is the most accessible 2000m glaciated summit in the South Island though. The only other contender would be Mt Brewster at Haast Pass. Rolleston can be readily climbed in a long day from Christchurch via almost any of the routes available on the peak and is therefore a great training summit for alpinists and trampers wishing to extend their skills.

It is a reasonably challenging peak and requires good route finding, as well as an ice axe and crampons year round, and sometimes a rope. The peak has claimed a number of lives – this has often occurred by underestimating the dangers present. 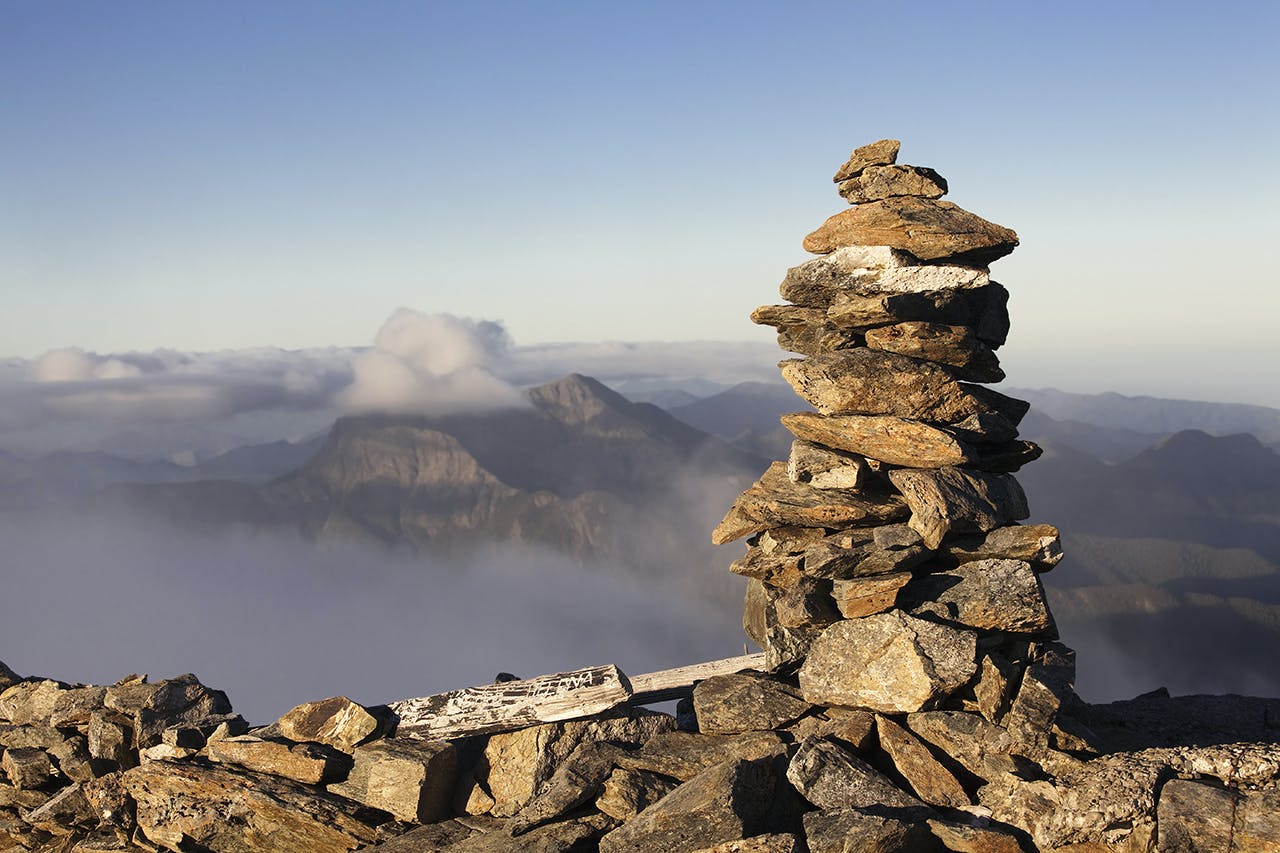 The second-highest summit in its namesake park, Mt Richmond is a delightful day-trip from Nelson. Access is from Top Valley, and if you can 4WD across Armchair Stream up to Jubilee Flat, you’ll keep your feet dry and save an hour.

Once on the unforgivingly steep spur, the forest track eventually evens out, then you pick your way along a knife-edge ridgeline towards Grass Knob. Sidle around the headwaters to Richmond Saddle Hut, a useful stopover.

Above the bushline, it’s an unnerving scramble across 40-degree slopes of shattered scree and teetering boulders. Stop to admire the little things like vegetable sheep and pen-wiper plants. The slow grind to the summit cairn takes an hour, but the views are simply breathtaking.

This pyramidal peak was named after a prominent farming family in the Wairau. On a clear day, Mt Richmond provides a spectacular platform to gaze at the world below. To the north, Taranaki’s symmetrical cone appears, ghostly above the Tasman; to the south, Tapuae-o-Uenuku.

A well-graded track which thoroughly rewards with mesmerising views over Lake Wanaka, its peninsulas and islands, and the peaks of Mt Aspiring National Park. The classic day-trip from the town, but closed for lambing between October 1 and November 10.

Climbing Ruapehu can be easily done in any season, but winter, when the volcanoes of Tongariro National Park are draped in snowy cloaks, seems to be the best and most exciting.

The easiest way to the summit is from the Whakapapa Ski Field and you can knock a couple of hours off the ascent by riding the Waterfall Express chairlift. Here you can check avalanche conditions with the ski patrol before cramponing your way to the summit – the line is obvious.

The Summit Plateau can be reached in three-four hours and from here a further 30min is needed to climb to Crater Lake – a unique spectacle well worth the extra effort.

Most do the return trip in a day, but camping on the plateau is a marvellous, though cold, experience. If this sounds like you, options abound: return the same way the following day or why not consider traversing the mountain by descending the western Mangatoetoenui Glacier to Tukino Ski Field? The northern Waihohonu Ridge is trickier to reach and will lead you to the Whakapapa-Waihohonu Track which you can take to Whakapapa Village.

Standing steeply above Sudden Valley Stream, Mt Scott and the Polar Range have much easier slopes rising from the Edwards Valley. From its summit there are sweeping views to rugged Mt Franklin and across to Mt Oates. It’s an airy open view, best enjoyed when there is still a bit of snow around in early summer. 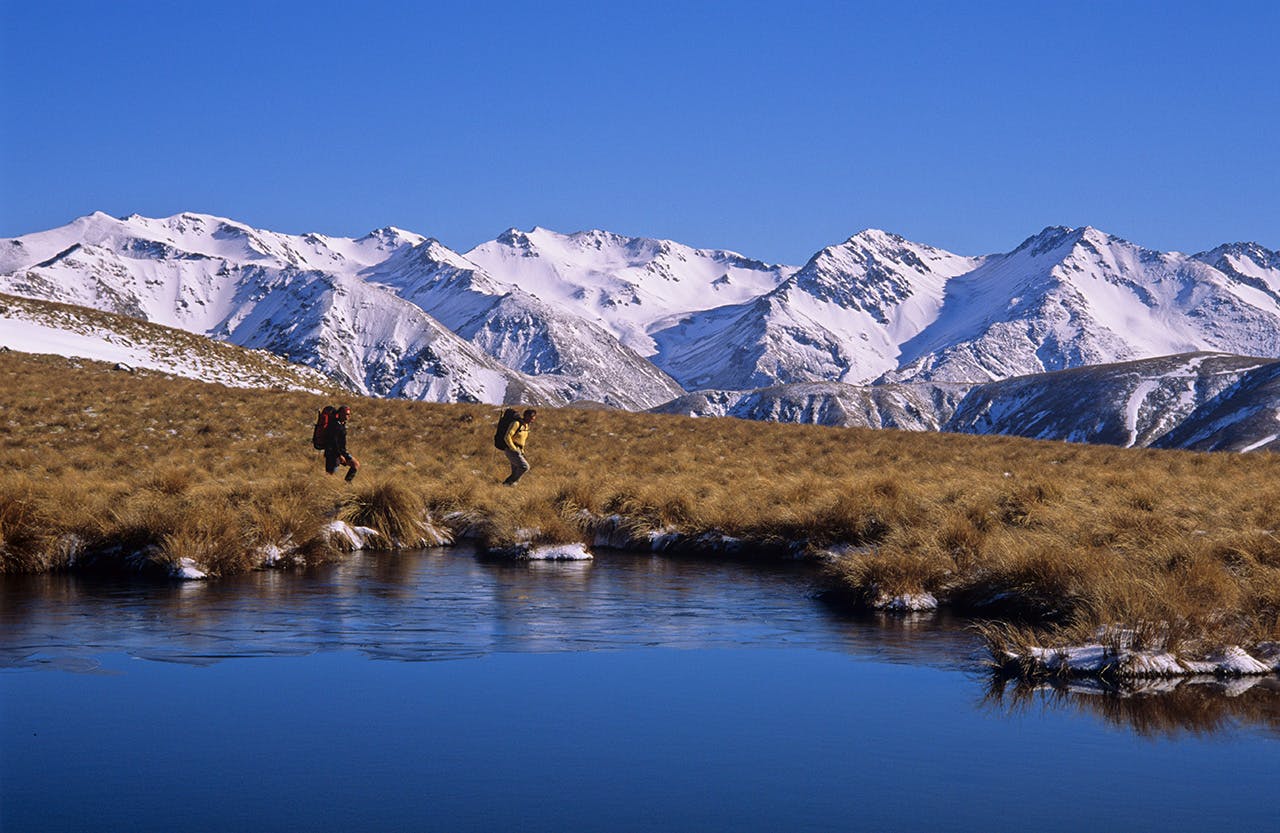 The tracks around Mt Somers Conservation Area make a good low altitude destination when the weather’s bad. When it’s good, the summit provides extensive views of the Alps from Arrowsmith to Aoraki and more, as well as of the Canterbury Plains.

There are three approaches. They can be done as up-and-backs or crossovers, either as day trips or part of a weekend.

The marked track starts at Sharplin Falls Reserve and follows the South Face Track to Staveley Hill. It then knocks off the next 500m on a brutally steep spur, with just a few minutes along the gentle summit ridge to get your breath back before reaching the top. Being south facing, this route can require an ice axe and crampons into early summer or after unseasonable snow fall.

The second, unmarked, route involves a scramble from the saddle on the Mt Somers Walkway, followed by a gentle ascent up the edge of the mountain’s northern escarpment.

Personally, I prefer the third route; From Woolshed Creek car park, cross the creek and climb 400m up Rhyolite Ridge. That’s the worst bit out of the way. Follow the South Face Track north-east for 1km, then leave the track and head up the obvious broad ridge.

After a 400m ascent, the gradient eases slightly and the unmarked route follows the line of the escarpment that forms the southern ramparts of Mt Somers.

Unlike most of the Canterbury foothills, Mt Somers is volcanic in origin, which makes for some interesting geological features. At one point, a small basalt bluff appears to block the way but an easy tussock ramp breaches its defences.

Sentinel Peak is strategically located above The Neck of Lake Hawea, the short arm of the lake that heads the Haast Pass Highway across to Lake Wanaka. Sentinel is set well back from the lakes and is a reasonably demanding climb entailing several kilometres of ridgetop travel, from where there is a final scramble to the summit.

It is accessed from Kidds Bush camping area up a marked track into the Sawyer Burn and its small hut.